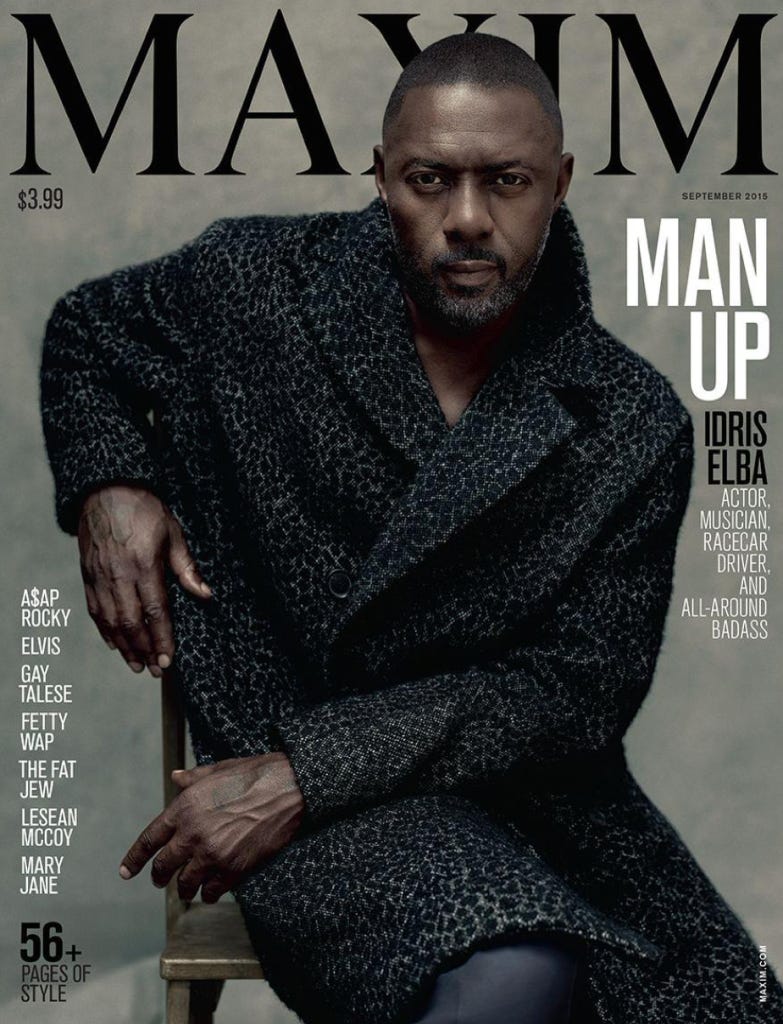 The Wrap – Actor Idris Elba graces the cover of Maxim’s September issue, the first solo-male cover in the history of the men’s publication.

“We’ve never in U.S. Maxim history had a man on the cover solo,” new editor-in-chief Kate Lanphear told Racked. “This is the very first time, and there was no one else in the world more badass than Idris.”

Talk about the end of an era. Idris Elba is great and I’d love him to be the next James Bond and all but it’s a sad day that Maxim is doing this with its cover now. I mentioned on JJ’s Yuppie Junk podcast last week that one of the reasons I got into the men’s website game was that during my first job out of college working in WWE’s publicity department, I thought there were no good sites online doing what Maxim/FHM/Stuff had done over the previous ten years in magazines. And Maxim in particular being the first magazine in the US to go all in on featuring hot famous women on the cover alongside funny and interesting articles was in the best spot to make a good online media company too for when print started to die. And they didn’t. And then the magazine kept losing money, their website sucked, they got sold to new companies several times, and sites like Barstool popped up and did it online better and in a more modern way and now FHM and Stuff are dead and Maxim is desperately trying to turn a profit however it can.

It’s sad to see something that was once so influential is now trying to be a GQ or Esquire instead of what actually made it unique, especially given that it’s not even so much a pussification of America thing as much as it is a “We had no clue how to run a business and adapt it for the world changing” situation. So let’s pour one out for Maxim and celebrate it and the other guy magazines with my favorite five magazine covers from the “guy magazine era” (so, to clarify, your Maxims/FHMs/Stuffs and not your Playboys): 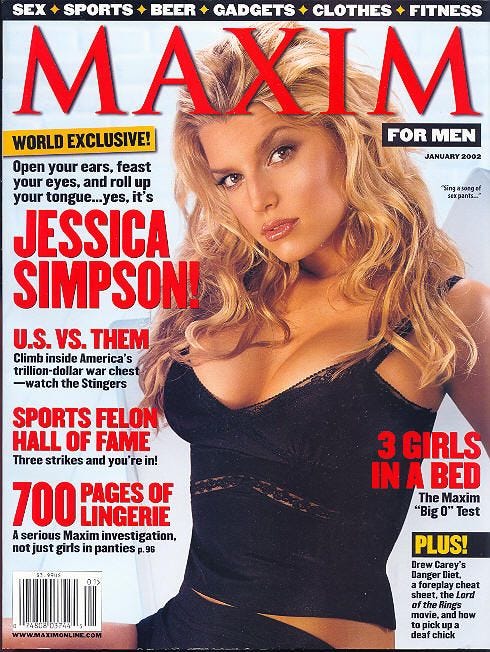 Jessica Simpson 2002 – This is the first time I remember seeing her do anything sexy — she was previously just a little religious chick singer — and the pics from the shoot are unreal. Nothing better than surprise huge titties on a seemingly innocent girl. 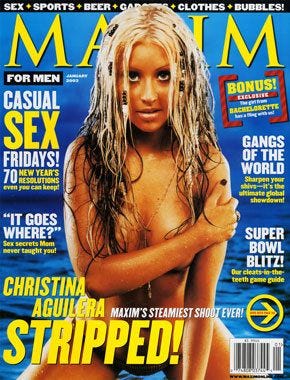 Christina Aguilera 2003 – This is when Christina Aguilera moved to the “I’m a big skank”/Dirrty stage of her career and the photoshoot for Maxim definitely matched it. All the pics are great but the one of her ass up in the innertube might be one of mankind’s greatest achievements. 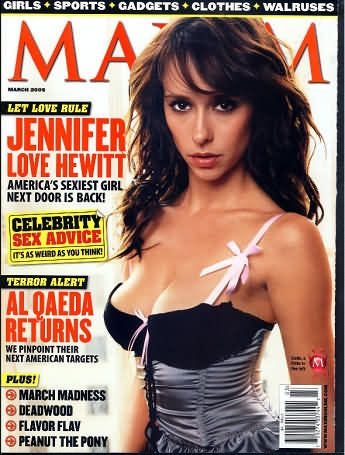 Jennifer Love Hewitt 2005 – The one thing these magazines were best at is rebranding famous chicks previously perceived as good girls by going “Well here she is half-naked, take her seriously as a woman.” Jennifer Love Hewitt busting out of lingerie definitely did that. Counterpoint: These days famous chicks trying to be taken seriously like all the former Disney actresses just “accidentally” release nudes or a sex tape so I guess we’ve made positive strides there. 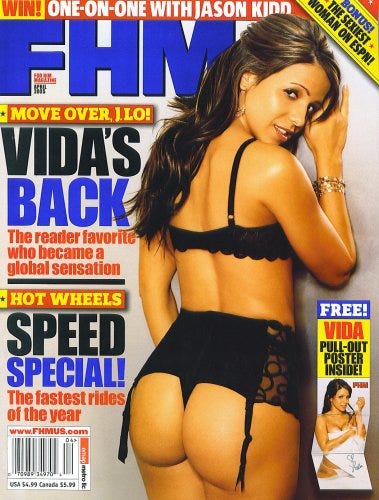 Vida Guerra 2005 – FHM was one of Maxim’s biggest competitors (and I think still exists in the UK) and while they couldn’t get all the pop star chicks on the cover, they did a way better job breaking random hot chicks and pumping them up until they were famous, sort of like the Instagram models of the day. Vida Guerra was one of those girls. They trotted that pre-everyone-loving-big-asses Latina booty out there time and time again and, honestly, I think Vida Guerra deserves a lot of credit for being at the forefront of the squats and yoga pants movement that blows up Instagram today. And you can still follow her half-naked out there, so that’s nice. 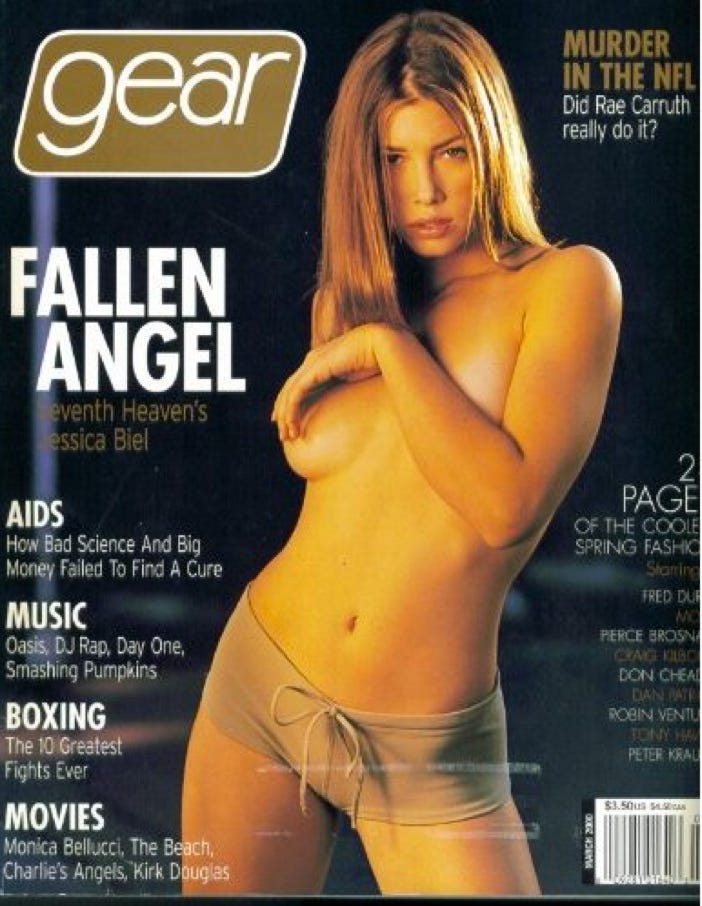 Jessica Biel 2000 – I think the background on this one was that Jessica Biel wanted to get off that religious show 7th Heaven and was the first to go “You know what’ll get me out of this contract? My tits.” So she went to random ass Gear Magazine, did an unbelievably hot (and NSFWish) photoshoot that looks somewhere between sex slavery and old Calvin Klein ads and then became one of the most famous women in the world along with being married to Justin Timberlake. Without the Maxims of the world, who knows if she’d have reached her whole potential?

So even though you’re still alive, RIP Maxim. You’ll never again be what you once meant to a generation but I’ll never stop being thankful for your contributions.