First and foremost, the Cubs are one of the worst rosters in baseball and the White Sox are going to dismantle them. Bet the White Sox to hit 3+ bombs in a win tonight. Bet it responsibly. I think it pays. That's why I created this bet, duh.

HOWEVAH! We're in the dog days of summer. The division was won months ago and the White Sox have been on cruise control. If I've said it once I've said it a million times, priority #1 is being as healthy as possible entering October. Priority #2 is winning as many games as possible in order to have the best seen in the playoffs. The White Sox have not had their fully lineup ONCE this year. Not a single game.

Tonight the White Sox will have what should be their most complete lineup to date, though they're still missing Engel who should be back soon and for good (hopefully). That lineup fucks. I know the offense has pissed people off because of its inconsistency this year, but inconsistencies are going to happen when the lineup has guys that should be backups playing 5-6x a week and with 2-3 of them in the lineup in every given day. That's not to say those players are bad, either; Brian Goodwin, Leury, Mendick and others are all more than adequate backups, even on a good team like the White Sox. But they're backups. That's fine. Every team needs 'em.

And speaking of backups, the question I got the most for this mailbag is this:

I'm riding with Seby all day long. Collins SHOULD be the backup. Hell, he was a 1st rounder. He should be a starter. But he hasn't earned that. Assuming they go with 2 catchers in the playoffs, I am riding with Seby all day. At worst, he can receive, call a game, and throw. Yes, he's had issues with passed balls. Yes, he's striking out a 40% clip. But the latter you won't have to worry about really in the playoffs. Yaz will get babied until October and then he'll catch every game. The only time you'll (maybe) see Zavala in the game is after Yaz is pinch ran for, and that might not even happen.

That said, I'm sure they'll send Seby down as to not burn an option on Collins. For the post season roster though? Zavala all day. His receiving skills and game calling abilities have won me over. I don't trust Collins in any realm of baseball personally.

Our guy Beeflof wrote a fantastic article on defense first catchers and their roles on teams successful teams a few weeks back. I'd read that asap before continuing with this blog. 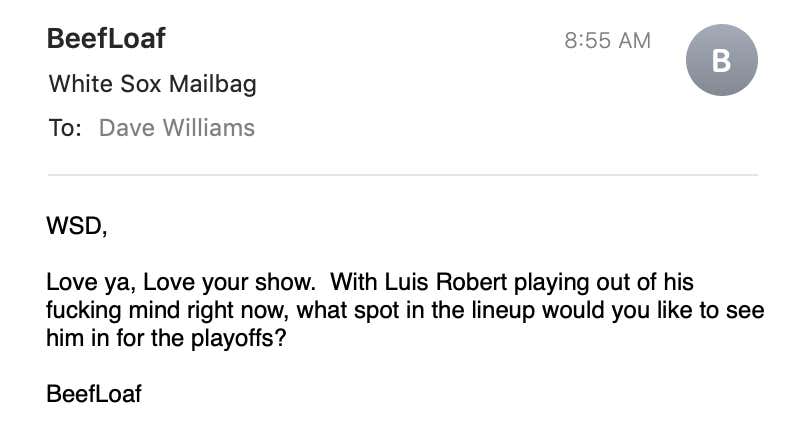 When I was filling out the lineup above I had trouble slotting him. I prefer Moncada's patience in the 2 hole and have ALWAYS thought that's where he was best suited and that's where I'm keeping him. I'll go with Robert in the 3 hole for now. I know Tony is still in love with playing handedness, and I do think handedness is an important consideration, so I have no idea where to slot these guys at the same time. I compose my lineups thinking where each individual should theoretically slot best, but then I see I have like 100 RH hitters in a row and aren't using the switch hitters in the Sox lineup to break them up at all. It's weird. Maybe they'll put Grandal 4, Abreu 5 and Eloy 6? Not sure. What I do know is a power hitting lefty will be high on the off season to do list come November. 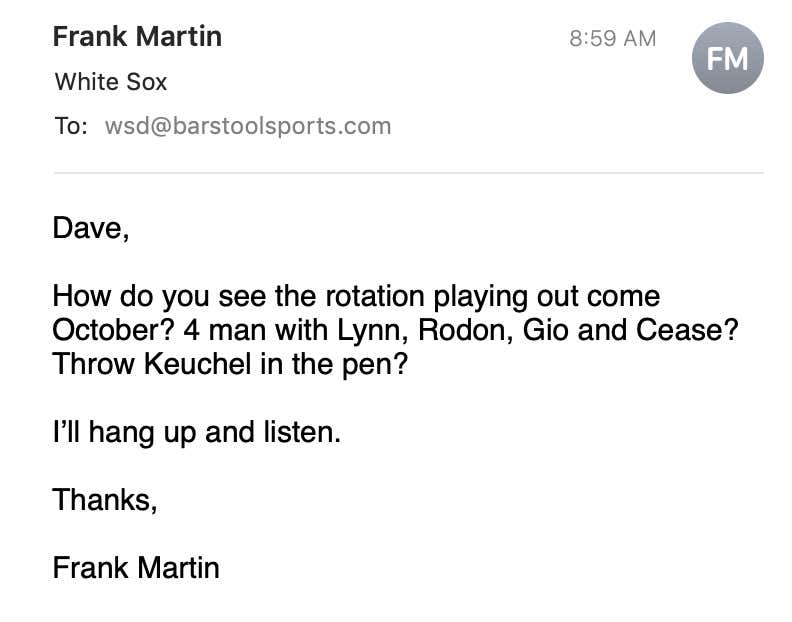 I'm def starting game 1 with Lynn. He's a been there, done that guy. I typically would go sheer talent over experience, but in Lynn's short time in October we know he was bred for October baseball. After that I'm going with Gio then Rodon. Gio dominated the A's in the postseason last year and has pretty much dominated good teams all of this year. It's the dog shit teams like the Royals that have given him fits all year it seems like. Rodon is the game 3 starter and then you get to game 4.

What I do know is Keuchel isn't going to be in the rotation come October. I know he's a been there, done that guy too, but his command has been BAD this year. That's not to say he's walking a ton of people, because he isn't, but he's behind often and missing over the middle of the plate. I don't want to see him in what could be a do or die situation. If I were managing, Cease is getting the ball in game 4 if they're up in the series and Lynn is getting the ball if they're behind in it.

Keuchel to the pen and in the long relief role. If, god forbid, one of Lynn-Go-Los gets touched up in any of their first 3 games, then Keuchel can come in and eat innings. Hopefully quality innings… and all of this is assuming he makes the post season roster, which is not near a given, I don't think. I'd have him on the roster, but not sure the Sox will roll that way. 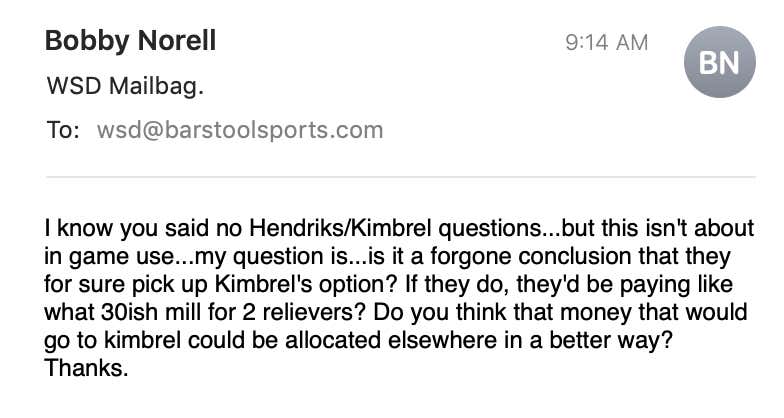 They are 1000% picking up his option and for a few reasons:

1. They didn't trade 10+ years of control of Madrigal and Heuer for a 1/2 season of a reliever
2. Money won't be the reason they don't pick up an option this winter for anyone, let alone one of the premier relievers in baseball.

I know it's atypical to pay that much money to two relievers, but the White Sox would get OTHERWORLDLY shit from the fanbase if money was why they let a player walk. Ain't gonna happen. Kimbrel will be back in 2022 unless he COMPLETELY shits the bed in this last month and in the playoffs.

Their payroll next year is already close to being their highest ever:

And that's prior to pre-arb raises, arb salaries, free agent pickups, and options being picked up. I'm guessing their payroll will be around $160-170MM next year and that payroll includes the $16MM owed to Kimbrel. What the White Sox need to hope for is that Dallas Keuchel doesn't sniff 160IP in 2022. That would mean his 2023 option kicks in. Gotta deal with him and his $18MM next year and hopefully that's that. 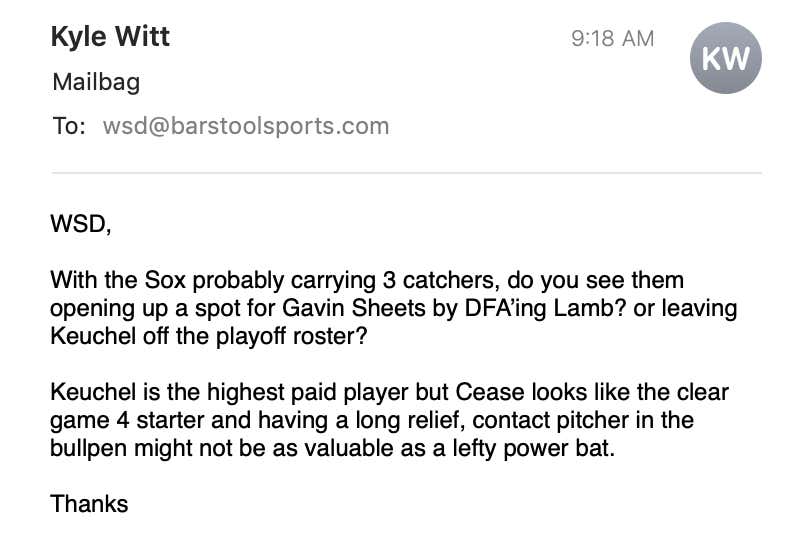 I already answered the Keuchel part of the question, but want to talk about Lamb real quick. He's been… not good since his hot April, even though he missed a good chunk of games due to injury. I would prefer riding with Sheets for sure. With him there's at least some element of the unknown. He's been okay or better in his ascension to the big leagues and played pretty damn well in his cup of coffee in Chicago earlier this year. With Sheets, he might still be getting better.

With Lamb? We know who he is. I don't care about either of them as defenders as they won't play defense in October, but I'm rolling with Sheets' bat if the option is between one or the other… but I'm not rolling with sheets bat over Keuchel though. Can't have too much pitching in the playoffs. The righties have to try their damndest to hit righties. I like Sheets but not enough to boot Keuchel from the postseason roster for him…. yet. I reserve the right to change that opinion based on how Keuchel wraps up his last 4-5 starts. I still have a glimmer of hope that Keuchel can be a good enough long man for the playoffs. We'll see if I'm right. Could very well be wrong there. Hope is a powerful drug. 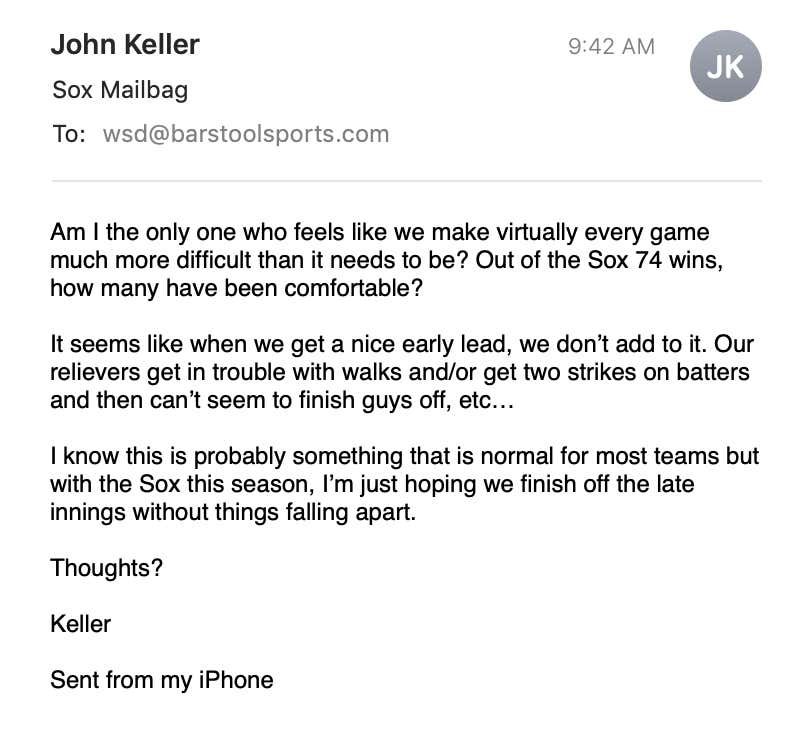 This has been a very annoying part of the White Sox 2021 season, but again, the White Sox haven't been heathly. At all. Now they are. I am giving them the month of September to gel as a unit and hit a stride. I think they do it. I think we see an AWESOME month from the pen with Hendriks taking over the Andrew Miller dominant 2 inning swing man role and Kimbrel locking down the 9th.  Kopech will also be Kopech in spite of his shit game yesterday. That's an awesome, awesome 6-9. I am FULLY confident in that 6-9. It's going to be the X factor for the team in the playoffs.

I also think they start hitting a lot more bombs. Let's do some simple math: Missing Grandal, Lu and Eloy for most of the season took away what… 50-60 home runs for them? 25 or so from Eloy 15+ from Lu, 10 or so from Engel and 10 from Grandal? That's a LOT of runs even if you deduct the 20-25 HRs the backups were responsible for. Those bombs the White Sox missed out on = wins. Ball go far, team go far. If they're hitting the ball in the air in October, they will win it all. If they're not, their offseason will start way earlier than we'd like. 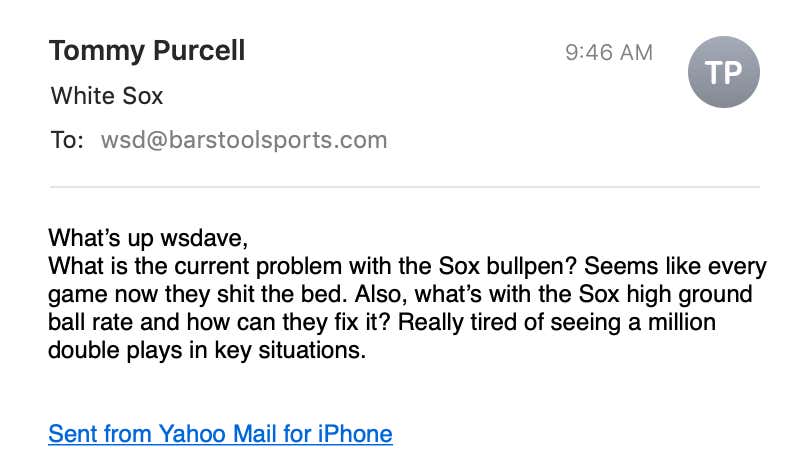 I agree. The double players are very annoying and ill-timed. I will say it a third time: ball go far, team goes far. Hit home runs and they win. Here's a stat from earlier in the year:

I know that's outdated, but the point and the trend matters. BALL GO FAR, TEAM GO FAR! Just hit goddamn bombs. They have the horses to do so, now they need to do so.

The next 2-3 weeks could be really annoying for White Sox fans. That's a warning from me to you all. I think we're going to see Tony REALLY tinkering with different shit to get an idea of what he thinks should work best for October, from lineup construction all the way through bullpen usage. He wants to know who he can lean on in late games, who works best in what part of the order, etc. That, and we'll see guys getting plenty of rest. Again, that's priority number 1. Then come the last 1/3rd of September, I think we're going to see less rest from starters and more "let's pound this teams face in" type games. I think they will try to time being their absolute hottest at the start of October.

Assuming this is how they're rolling, I personally love it. This team hasn't come CLOSE to peaking this year. If they're at their best in October, they win it all. If they're not, they don't. I know that's far from some hot take, but with all of the shit Sox fans hear from other fanbases and the media about not being able to win against good competition I just sit back and laugh knowing they haven't been close to their best at all this year, yet are still one of the best teams in baseball.

I love the spot they're in. LOVE it. Let's go beat the shit out of the Cubs.