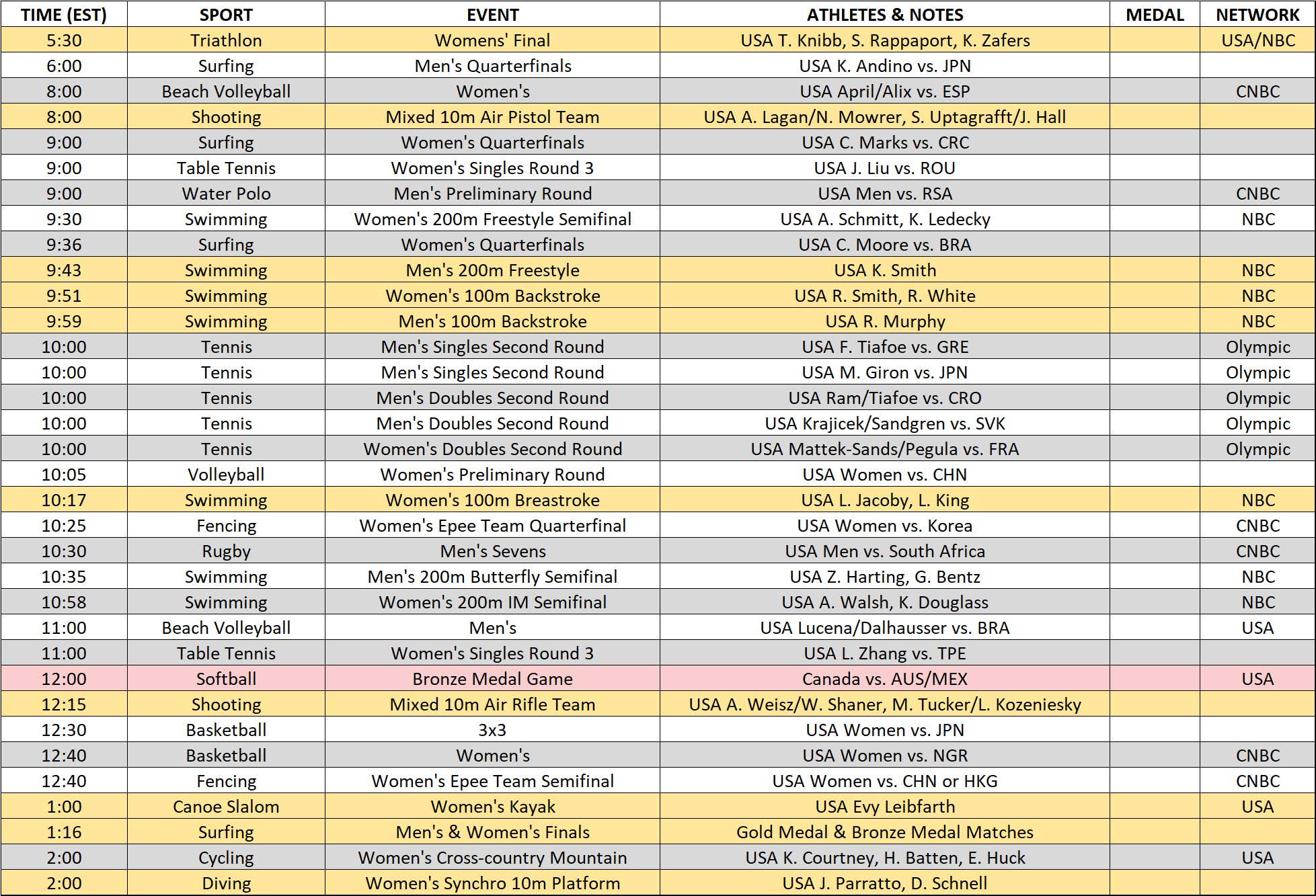 NOTE: The GOLD means it is a MEDAL EVENT, as in a medal is on the line…

BIG TIP: Everything is always streaming on NBCOlympics.com, or Peacock

Okay, but seriously, I will start doing this every day (in the evening, so you know the events for the next morning).

Yes, it's dumb and annoying that you can't just post Olympics clips on Twitter. It isn't the fault of NBC, it's the fault of the International Olympic Committee and the company they run that films all of the events, the Olympic Broadcasting Service. The history of OBS, what it does, and why it exists is pretty fascinating. The IOC created it for consistency (except for a few rogue cameras from the likes of NBC, etc., what you see at home is what every single person in every country sees as well) and to further control the rights to the games. This is a huge reason why the IOC doesn't allow anyone to post highlights if you can post whatever you want at home, home, NBCUniversal may not shell out nearly $5 billion the next time the contract is up.

Dumb? Yes. Everything about the Olympics is in the name of excellence, fair play, sportsmanship, etc., but also, you know, a fuck load of money. So, yes, it is dumb, but it also makes complete sense. Everyone gives Major League Baseball shit about their control of highlights on social media, but I promise you the IOC (FIFA as well) is years behind the Show when it comes to this topic.

WITH ALL OF THAT SAID, what is NBC's fault is their fucking terrible job at promoting when and where to watch all of the events. The fact that the schedule isn't shoved in my face at every turn with an NBCUniversal stamp is just fucking crazy. So, I am here to help. I will post one of these each evening (today I did it later, so you get tonight's schedule this afternoon) and help you find where and when to watch the Games of the XXXII Olympiad.

SWIMMING:
- Kieran Smith (USA) looks to become the first American since Michael Phelps in 2008 to win the Men's 200m Freestyle. Before Phelps in 2008 (who lost to the Thorpedo, Ian Thorpe in Athens), no American had won since Bruce Furniss at Montreal 1976. So this would be quite a bit of history for the Americans.

- After dominating the Women's 100m Backstroke for a few Olympics, the United States found themselves in the Silver position on the podium at Rio 2016. 21-year old Rhyan White, and 19-year old Regan Smith are looking to reclaim the honor for the red, white, and blue. Smith is the odds-on-favorite along with Australia's Kaylee McKeown to take home the Gold.

- The United States Men have won Gold in the 100m Backstroke dating all the way back to Atlanta 1996, thanks in large part to the legendary Aaron Piersol, but defending Gold Medalist Ryan Murphy does not enter the final as the favorite tonight. Kliment Kolesnikov of Russia is the favorite and zoning in on taking down the Champion and World Record holder tonight.

- Another defending Olympic Champion and World Record holder from the United States is Lilly King and she too is entering her event as a (slight) underdog. South Africa's Tatjana Schoenmaker will walk into the Aquatics Center in what will be the final medal handed out in the evening for Swimming. The United States' Lydia Jacoby also qualified for the final, but anyone other than King or Schoenmaker winning would be shocking.

RUGBY SEVENS:
- I wrote a whole blog on Team USA and Rugby Sevens, so I will keep it short here: tune the fuck in at 10:30e. You won't regret it.

VOLLEYBALL/BEACH VOLLEYBALL:
- Tonight is a dynamite Top 3 matchup as the United States Women, ranked number-one in the world, take on China, ranked number-three in the world. The United States Women have never won Gold (or Silver for that matter) in the sport, but this may be their best chance. I am fired up for this one, especially seeing as to how China is the defending Gold Medalists, and it starts right around 10:05e as well this evening.

- April Ross (Silver in London, Bronze in Rio) and Alix Klinemann can all but wrap up Group B for Women's Beach Volleyball tonight, with their match starting at 8:00e on CNBC. Meanwhile legendary Gold Medalist (Beijing 2008) and shaved head man Phil Daulhausser is back with Nick Lucena for the men at 11:00e, as they look to avoid an 0-2 start to the Games.

--
Those are just the notable events, and I will post tomorrow's schedule later this evening, but don't sleep on Canoe Slalom…

…or the debut of Surfing…