Before we get into the blog, I just released a new YouTube video comparing the C58 vs the Fara 83 after both of these guns got nerfed - enjoy the video!

This is HUGE news for the futbol gaming community (which is massive). PES (Pro Evolution Soccer) is now rebranded as "eFootball" and will be free for their users. There will be no more physical copies of the game released and no more paid annual releases (thank god).

PES always felt like FIFA's little brother, similar to the dynamic of NBA Live vs 2k. However, the gamers that started on PES, absolutely love the game and the series. Whenever I play Zah is FIFA, he changes the basic FIFA controls to PES controls because that what he knows and is comfortable with. Can't wait to talk to him about this breaking news.

'eFootball' is taking a very interesting approach to soccer video games (See roadmap below for reference). 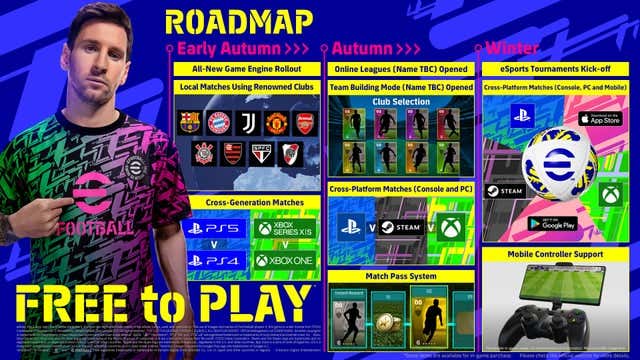 The two biggest highlights - Cross platform matches (LETS GO) and Team Building Mode (their version of Ultimate Team). To explain eFootball more, only exhibition will be free to play. The rest of the modes can be purchased at a later date (Team Building Mode in Autumn for example).

My biggest question - if you buy Team Building Mode once, do you have to re-up it every year like a subscription? It seems like that's not the case, it's just a one-time purchase and the eFootball game is updated annually. This makes Ultimate Team/Team Building Mode very interesting if it carries over from year to year. This would change the game forever as we know it.

How will FIFA respond? The response I'm hoping for the most is immediately implementing Cross-Platform. This would be the biggest W for the soccer gaming community imaginable. I don't see FIFA ever going to a free-to-play model, but I'm sure they'll be monitoring eFootball's success very closely.