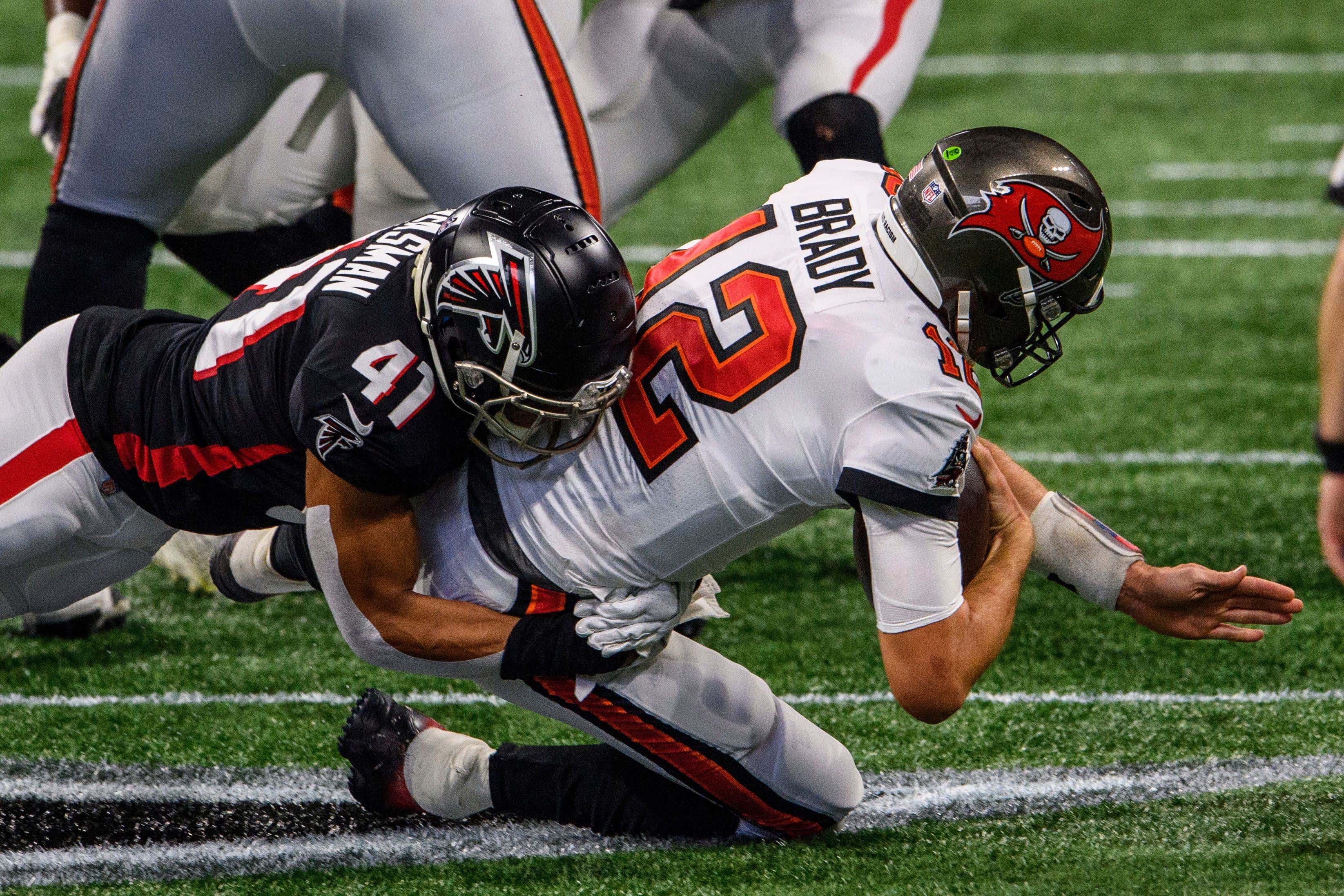 Last week, when the news came out about Tom Brady playing not just a few games with a torn MCL last year that required surgery but the entire 2020 season:

I simply threw it on the pile of the mountain of evidence that he is a metahuman who defies medical science, is impervious to injury, feels no pain, and who cannot be stopped by any methods known to mankind.

And honestly, I gave some thought to the glaringly obvious fact that his knee was never once mentioned on the Bucs injury report, but just moved on and didn't mention it in the blog. Why? Because he's Tom fucking Brady, that's why. I've just resigned myself to the fact he doesn't have to live by the rules everybody else does. In the spring of 2020, he was organizing practices with his teammates while the rest of humanity was sheltering in place with Doordash and "Tiger King." After the Super Bowl, he was the only one on the field not wearing a mask. And never wore one, even when everyone else in the room was. Even when he was with Peyton Manning and he was implying Eli is a moron:

I didn't mention it because I've come to accept that Brady is the Ubermensch (Superman) from Nietzsche's "Thus Spoke Zarathustra," living an existence free from the consequences of his actions. And therefore we would never hear about this matter again. But it looks like I could be wrong about that.

CBS Sports - The problem for the Buccaneers is that if Brady played the entire season with an MCL tear, then he should have been listed on the team's injury report each week during the season. The NFL has a specific rule that covers this exact situation and the rule is pretty clear.

From the league's handbook:

"All players who have reportable injuries must be listed on the practice report, even if the player takes all the reps in practice, and even if the team is certain that he will play in the upcoming game. This is especially true of key players."

The italicized portion of the above quote is literally UNDERLINED in the league's operations manual. The fact that the NFL also mentions specifically that all "key" players should be on the report is something that will make this difficult for the Buccaneers to argue their way out of.

If a team violates the NFL's policy on reporting injuries, the commissioner has the power to hand down multiple different punishments, including the suspension of anyone involved.

"A violation of the policy may result in Commissioner discipline, which may include a fine on the involved club, fines or suspensions of involved individuals, as well as the possible forfeiture of draft choices by the involved club," the league's rulebook states.

You know the NFL is treating something as serious when they italicize the passage AND underline it. Remember in "Slap Shot" when Ned Braden tells Reggie Dunlop his wife underlines all the fuck scenes in a book, and that's how Reg realizes she's bored and their marriage is in trouble? It's like that serious. It's like a Tweet that's in ALL CAPS serious. It's six exclamation marks serious. At my old courthouse job, the state sent us all a three page memo about something or other. And my supervisor took a yellow highlighter to the key points for emphasis. And highlighted every single word from all three pages. True story. Well with this "reportable injuries" passage, the league has broken out the Ctrl+i and the underliner, hit the Caps Lock button, added six exclamation points and multiplied it by a yellow highlighter. You've got to really, honestly tell us when a player is hurt. We're not kidding, guys. We totally mean it. With an emphasis on the key guys. And there is no guy keyer than the Super Bowl MVP who turned a franchise around after years of irrelevance.

But mark my words. All that emphasis and highlighting and stressing the importance of things isn't going to result in anything. Maybe the team will get fined. Or someone in the front office will get suspended. A designated fall guy who will take the hit for everyone. At most - at the absolute maximum - the Buccaneers will lose a late draft pick. But nothing will happen to Brady or the coaching staff. Because Roger Goodell doesn't have the balls to come after Tom Brady again.

I'm sure there are people who still believe Goodell "won" the Deflategate battle because Brady ended up serving his four game suspension. But in the long run, it was humiliating for Ginger Satan. Brady came back to a 3-1 team. He went 11-1 the rest of the way in the regular season, then capped off the postseason with a 25-point comeback and an overtime win in the Super Bowl. And that thin-lipped automoton had to stand there while the Patriots celebrated in his face and then hand Brady the MVP trophy the next day at one of the most socially awkward, excruciatingly uncomfortable press conferences ever conducted.

And all the years and all of Brady's success since have only served to italicize and underscore how utterly stupid the whole thing was. The league has never once talked about air pressure in footballs since. They never conducted tests, never mind releasing any results. They built this entire construct on the lie that Brady's greatness was a product of squishy footballs at Patriots home games. And yet anywhere he's played since, he's simply continued to be great. Which is humiliating for the Witch Hunter in Chief who conducted the whole thing.

Goodell can't come after Brady again because it will just draw attention to the fraud he perpetrated in 2015-16. The public reaction will be "Why is he smearing Brady again? And what was up with that last one anyway?" and he can't have that undermining what tiny shred of credibility he may still have left. All of which makes Brady immune from prosecution.

And besides, the wrong team is guilty on this one. There is no groundswell of support around the league for going after Tampa Bay. There aren't owners calling Park Ave and demanding a special counsel be appointed to investigate Kneegate. The Bucs are the flavor of the month. America's Sweetheart. The nation is in love with Brady like they never were when he was in New England. Even though they are - to use everyone's term when it comes to the Patriots - repeat offenders. From tampering with footballs in the first Super Bowl they won to intentionally tanking a game to tampering and PED violations. But they're the Bucs and Bruce Arians is a media darling and no one in the league offices wants any part of making them look bad.

So if anyone gets punished over this, it'll be Bill Belichick, I expect him to lose at least two draft picks out of this.