What the hell is this? Sure, there's a decent chance that this guy put out a bunch of tweets in February of 2013 with different matchups and outcomes only to delete them, but still. He ended up on Italy vs England in Euro 2020s and PKs. Mind you, there was a whole tournament in 2016 before this one! Why not just guess Portugal in 2016? Why skip 2016 in general? I have no idea, I'm not the one out here predicting shit 8 years in advance. Oh and for those who want to say it's fake? 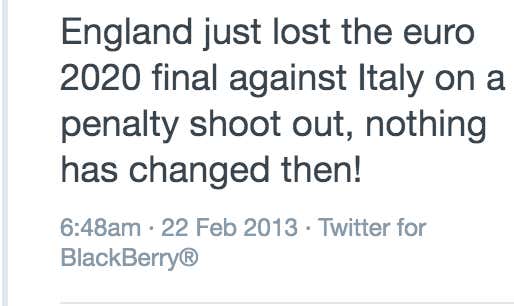 'Twitter for Blackberry.' That's how you know that shit is legit. I really wish we saw old school phones on Twitter though. I'm talking true old school ones. Imagine seeing Twitter for Motorola RAZR or whatever the hell the Nokia phone with snake was called. Give me real predictions on Twitter with the true old school phones. I also can’t keep up with technology and Twitter timestamping tricks and shit so I prefer to just believe it, sue me. I see BlackBerry, I just assume it's 2013.