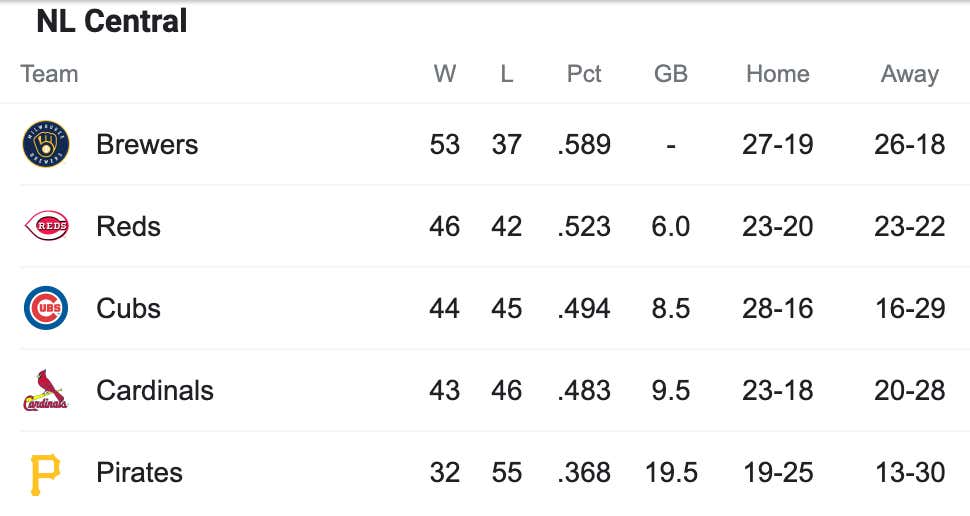 I should probably start this blog by taking responsibility for getting The Rizzo Ball. Prior to that moment the Cubs were in first place and above .500 by double digits, soaring above and smoking the competition. The story of the summer was the 2021 Cubs clawing and fighting for one more year of glory before expiring contracts. The conflict was building towards whether to add or subtract to a roster that already gave away Yu Darvish for a basket of virgins. Most Cubs' fans agreed to take one last shot and be Buyers at the trade deadline. This was destiny. Our core was giving it one more run.

Then I got the Rizzo Ball.

The Babes loved it.

The Baseball Gods? Not so much. 25 games and 18 losses later, you can confidently reflect back on the worst offensive regression in the history of your life and this sport.

Whether or not it's actually my fault, there's a professional duty to take some blame. Not all of it. But you guys can definitely get mad and say this is on me for getting the Rizzo Ball. Whatever makes you feel better about this disastrous collapse is on the table. I have no problem sacrificing myself for the better of the Chicago Cubs. There's a lot we'll need to get over in the coming weeks.

Personally, I think the Cubs are actively selling right now but winning out to the ASG game could stop that. Without being dramatic the clock on that started yesterday and the Cubs already won Friday. I can't even begin to believe I'm saying this but it's a last ditch effort in my brain. Reminder this is my brain. Let me have my glimmer of hope.

Responsibly and more reasonably - the Cubs are selling everyone and doing it a lot sooner than later regardless of how many games they win in a row. Everyone is out the door and I expect the pending All Star break to bring a lot of action. KB, Rizzo, Baez, Contreras, Hendricks. Literally everyone is on the table because you're so far behind the top of MLB and now we're just wasting time at .500. The only chance this squad had to make a deep run this season was to avoid a catastrophic losing streak and we all just witnessed it.

So while I'd love to see the boys sack up one more time and get hot, it seems downright unavoidable that Jed Hoyer hosts MLB's single greatest yard sale short notice. I'm sorry. Here's some (but not all) of what I'd do.

Trade Rizzo: I don't care who but if you're not going to pay him, keep good relations or give any other veteran a warm goodbye, then why dick around with Rizzo. I'm sure he would like another look at a 5/$75m extension right now but even more he probably wants a great baseball atmosphere to close his career. If he's down with it, pull the trigger. If he's not, then let him finish out the season because the trade capital isn't going to huge. Would he take a qualifying offer this winter? Would the Cubs get a good compensation draft pick if he left? Would anyone pay for him? All stuff we can table if there's a team that would give more than he's worth.

Try To Land The Farm For Hendricks & Contreras: I don't want to do this but if you're selling, you could honestly get a fortune for these two. Hendricks is easily the most underrated starter in baseball. He's signed through 2023 at about $14M a year. Contreras has another year of control left and might be the last guy in baseball who truly gives a fuck and takes this obnoxiously personal. That might be the missing link for a contender with uninspiring backstop play.

You're A Moron For Not Extending KB So Trade Him Anyways: simple as all hell that you're so dumb for not building around this guy so just get rid of him already. What are the Cubs waiting for? He's one of the most dynamic and talented players in the league and we treat him like a black sheep. Makes zero sense to me. Things have always been weird between the Cubs and KB and it's honestly at the point where we all just want him to be happy. He deserves a laid back atmosphere that appreciates his world class talent.

Anyone And Everyone In The Bullpen Not On A Rookie Deal: speaks for itself.

Play Jason Heyward Every Game The Rest Of His Contract: Nobody is going to trade for Heyward. He's on the squad until he retires or the contract expires. Personally I think he's so terrible that his punishment should be leading off and playing center field every single day. Not a day of rest. Not a matchup in mind. If we're rebuilding, and this guy is getting $26M then I want him earning every penny. Watch him hit .203 for a full season over 600 at bats. We're in this together. If we're going to be bad then let's go all in. Let's make Jason Heyward the face of the franchise.

More this week on Red Line Radio. Subscribe below.