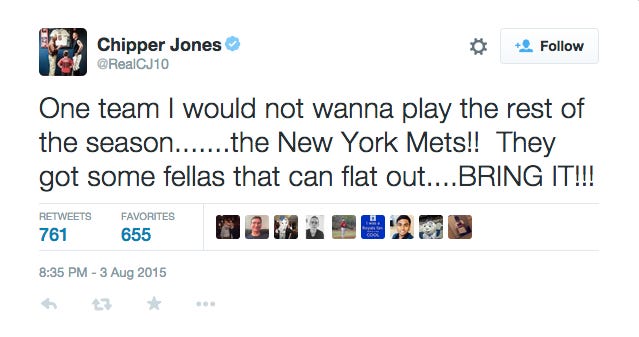 It may have taken a couple years after his retirement, but even Larry Jones is intimidated by the Mets. A hat trick of doubles tonight for Cespedes, first career home run for Conforto, and Kelly Johnson with a rib eye. A couple weeks ago, none of that was possible. None of these guys were on this team. Now they’re peppered in this lineup along with Granderson who continues to rake and Flores who is still getting standing ovations and bingo bango thats how you put up a dozen runs. All while Big Sexy just mows down the shitty ass Marlins on his way to 8 IP 5Ks 1 ER.

Meanwhile the bum ass Trashinals underachieving once again in DC, losing to the D’Backs. At what point do you just realize the Nationals arent ever really gonna put it together? Yea, they’ve been injured. But what team hasnt had injuries at this point in the season? Mets have been injured more than anyone. Their supposed 5 ace rotation isnt all it was cracked up to be, and besides Harper the bats are just as mediocre as the Mets are. Its like everyone has been waiting for the Nats to run away with this division by 10 games and I think by now we can officially say that aint happening. They’re just an underachieving squad.

Dont see Chipper Jones at home tweeting that he’s afraid of them, do you?