Got a little bit of good news/bad news here. The good news is this: after 2 separate achilles tears following being selected in the 1st round of the 2017 draft, Jake Burger is going to be making his big league debut tonight or some time in this series. Every White Sox fan is INSANELY excited for him, mostly because yes, he looks like a White Sox fan: 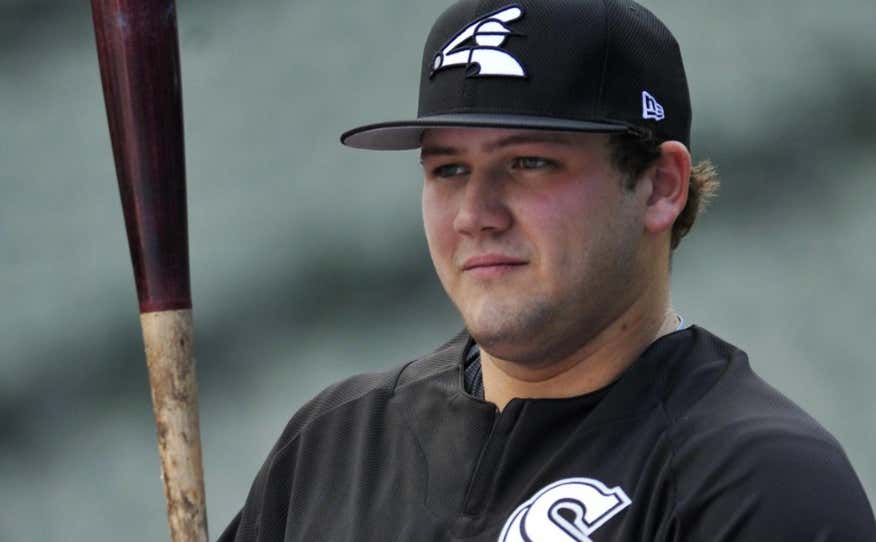 But mainly because of all the bullshit he's gone through to get to where he is now. Here's an injury of his first achilles tear over three years ago:

and he followed it up with a re-rupture about 6 months after this. How many athletes have ever come back from one, let alone TWO achilles tears? I can't think of any. It's a borderline death sentence for an athlete, for all intents and purposes. But not for Jake Burger. He started the course, no matter how bad his luck was, got in shape, and performed at a level VERY deserving of a call up today.

Look at how sveldt he looks now:

Side note: wtf is wrong with the dude in the tweet above? What a psycho

Stud muffin… and in spite of his shit injury luck, I'm buying high on him. Ya know why? Because I've had convos with him on RLR and otherwise and this dude knows how to fucking hit. He is very, very cerebral at the dish. There will be growing pains and times he looks overmatched, as is the case with 99% of rookies, but once he settles in he'll torch baseballs gap to gap and over the fence with regularity. I cannot wait for it. Super proud of him as a fan and he better get a heroes welcome tonight or tomorrow when he's announced as the starter. I assume that will be tonight, because…

…Yoan Moncada is out for the Tigers series:

…and maybe a little more. That's the start of the bad news, and that's fine - the Sox have the Tigers, Orioles and Twins coming up before the break. If there's ever a time to nurse an injury, it's now. They can tread water without him, at least I hope. Fucking baseball gods now. They're nothing but a bag of cunts.

The bad news doesn't stop there, though. In spite of his otherworldly April, Yermin Mercedes has been optioned to Charlotte. Here are his splits by month:

That's as bad a free fall as I've ever seen in sports. Went from Babe Ruth to the worst hitter on earth. But - Yermin has proven what he can do when he's hot. Obviously he's not the hitter we saw in April, but I contend he's not the hitter we saw in May or June either. Somewhere around a .270/.330/.475 hitter is what he should aim to be, and if he can consistently pull off a slash like that, he has a place in this league. It's up to him and the development staff to get him there in Charlotte right now.

We're feeling good tough; winners of 4 straight and more dog shit teams coming up in the next two weeks before the break. Every day that goes by we get closer and closer to having Eloy, Lu, Engel and the trade cavalry. Soon enough it will be off to the races. I think I've said that a time or two. Until then, give it up for Jake Burger everybody. This is a fun subplot in what will hopefully be a storybook ending for this team. Talk about resiliency from top to bottom.