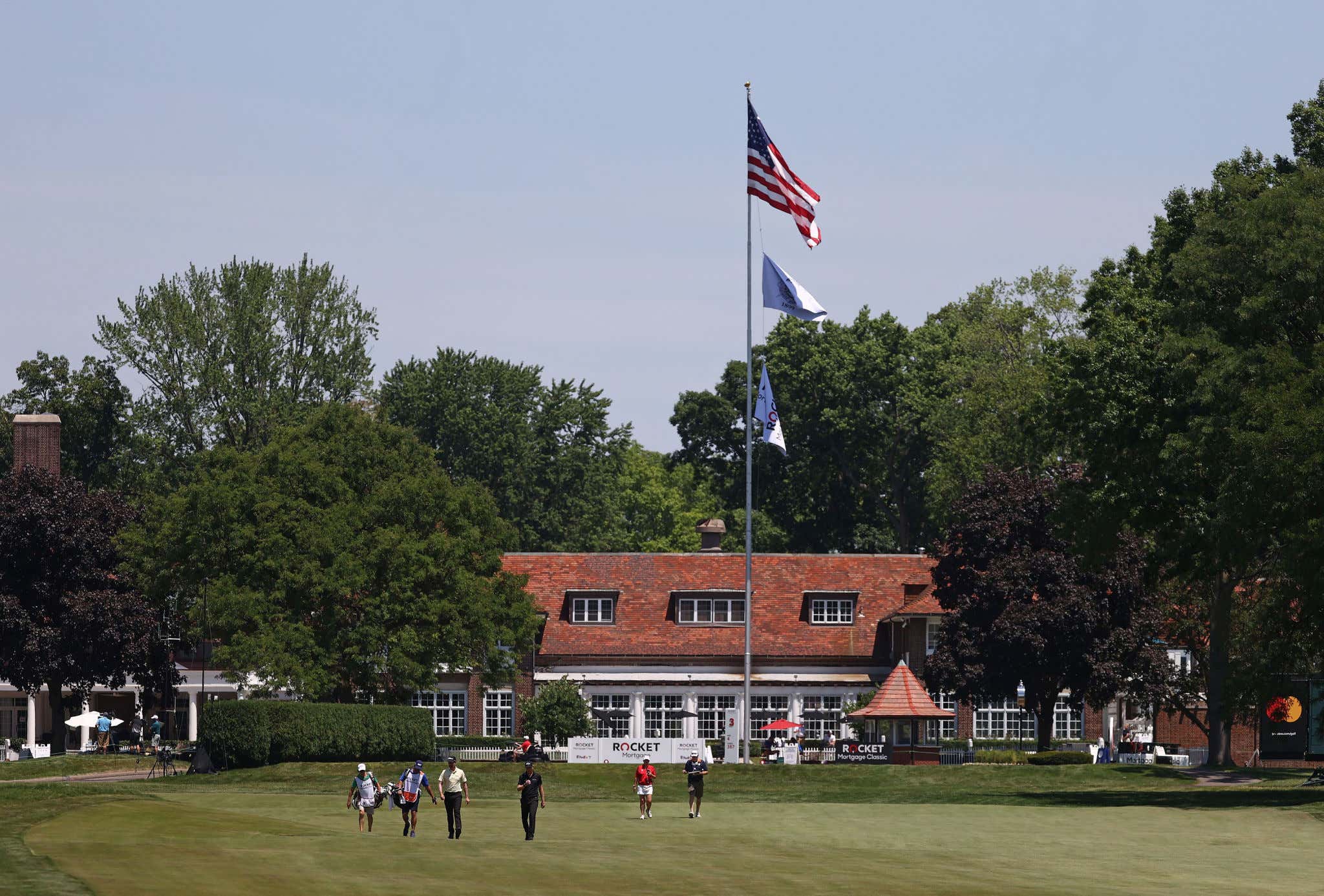 We're off to Detroit, where we have 13 of the world's top 50 teeing it off with 2 weeks to go until the Open Championship. Some are already across the pond for the Irish Open to prepare for links golf, and many more will do so at the Scottish Open the week after. That makes for a pretty weak pair of tournaments here on the PGA Tour between this week and (even more so) next week's 5th major John Deere Classic.

Most years the Travelers, the Rocket Mortgage, and the John Deere will give out 2 spots each in the Open Championship for the top finishers not otherwise exempt. That qualification is OUT this year, as the Open Championship decided that giving spots in the field to those who would have qualified by other means for the canceled 2020 Open was more important. Which is probably fair. Just takes a little steam out of the finishing stretches here.

Last year Bryson DeChambeau bombed the ever living shit out of this place to notch his first post-COVID win. It more or less confirmed to Bryson that his bulk and bomb strategy was won capable of winning the US Open. This event effectively replaced the Quicken Loans National event starting in 2019, so the list of recent winners is short. So instead of showing a list of recent winners, here's your leaderboard in each of the 2 tournaments. 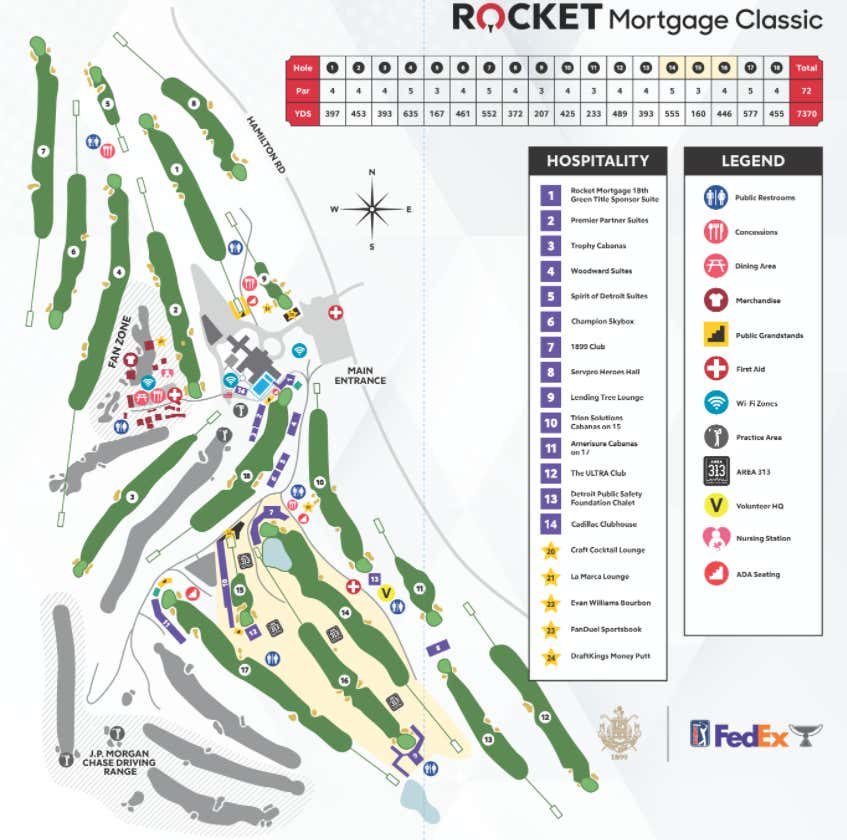 Detroit Golf Club is a 36-hole property designed by Donald Ross. That dude was a legend. Learned the trade from Old Tom Morris and designed shit like Pinehurst No. 2, Seminole, Aronimink, and East Lake, among tons of others. Ever heard of em? Believe it or not, this is the oldest course currently on the annual Tour schedule.

The Rocket Mortgage will be played on the North Course except for one hole - this week's 3rd, which is actually the South course's 1st hole. There are also a couple of holes being played from South course tee boxes. Confusing, I know. The track for this week will tip out for 7,370 yards. That can sound like a lot, but these fairways are some of the most generous and have yielded some of the longest driving averages on Tour. Bryson and Matthew Wolff finishing 1-2 would seem to support that.

You can just about guarantee this will be a birdiefest. -25 and -23 have won this tournament in its two years. I'm sure the tweaks to the routing of the course were with adding difficulty in mind, but the changes seem pretty insignificant. Gonna be a lot of circles.

Pretty simple little risk-reward par 5 here on the back 9. It's got the only water on the course and it's on of the few defenses any of then par 5's on this course. Should create a variety of scores, whereas those other par 5's are sure to get gouged to death. Could create some fireworks.

Some rain to soften things but, nothing too severe it would seem. Not too hot either. Not much to write home about. 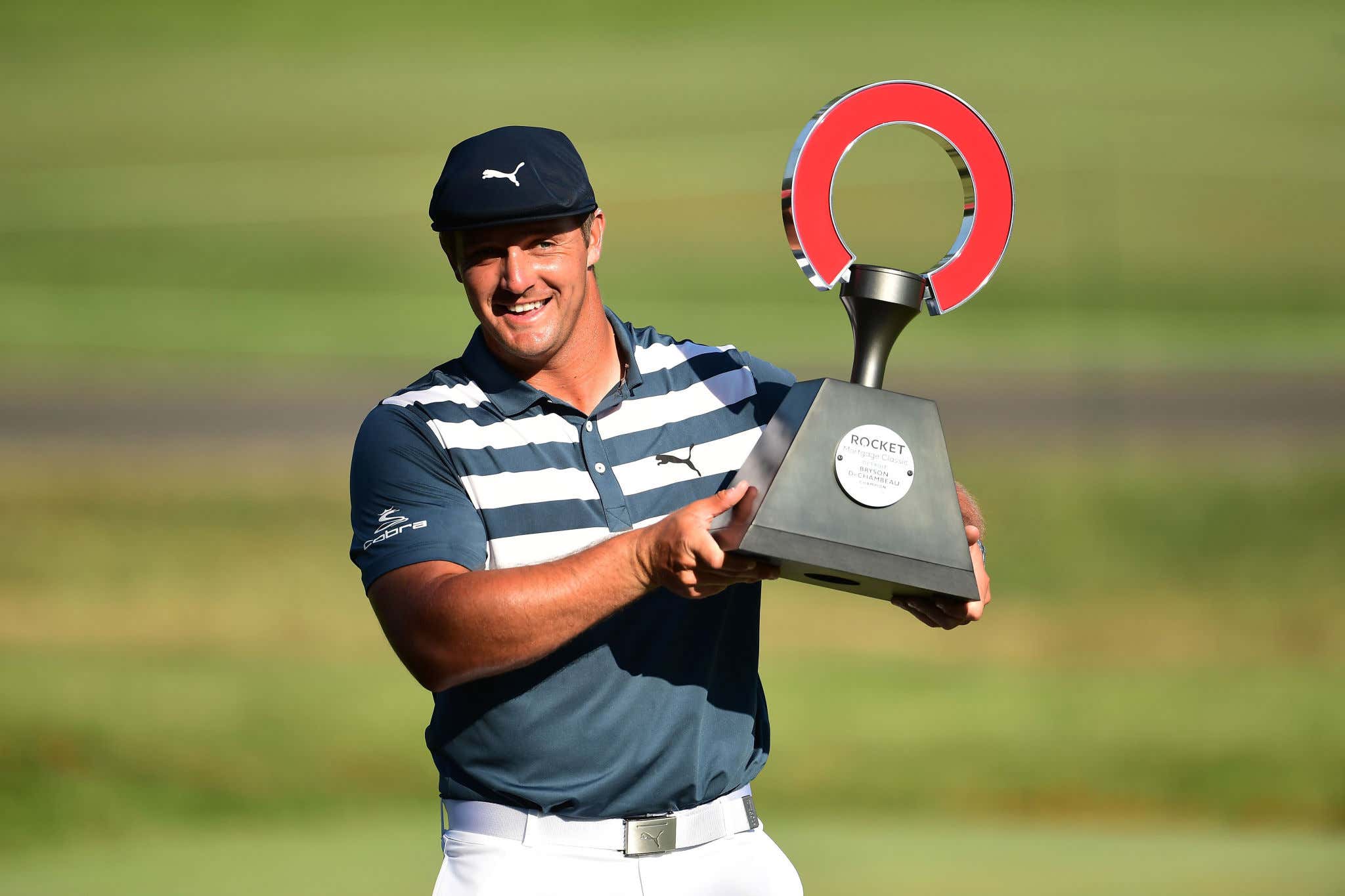 It's so bad it's good. It's the height of corporate cheesiness. How fitting for this guy to have won it last year. 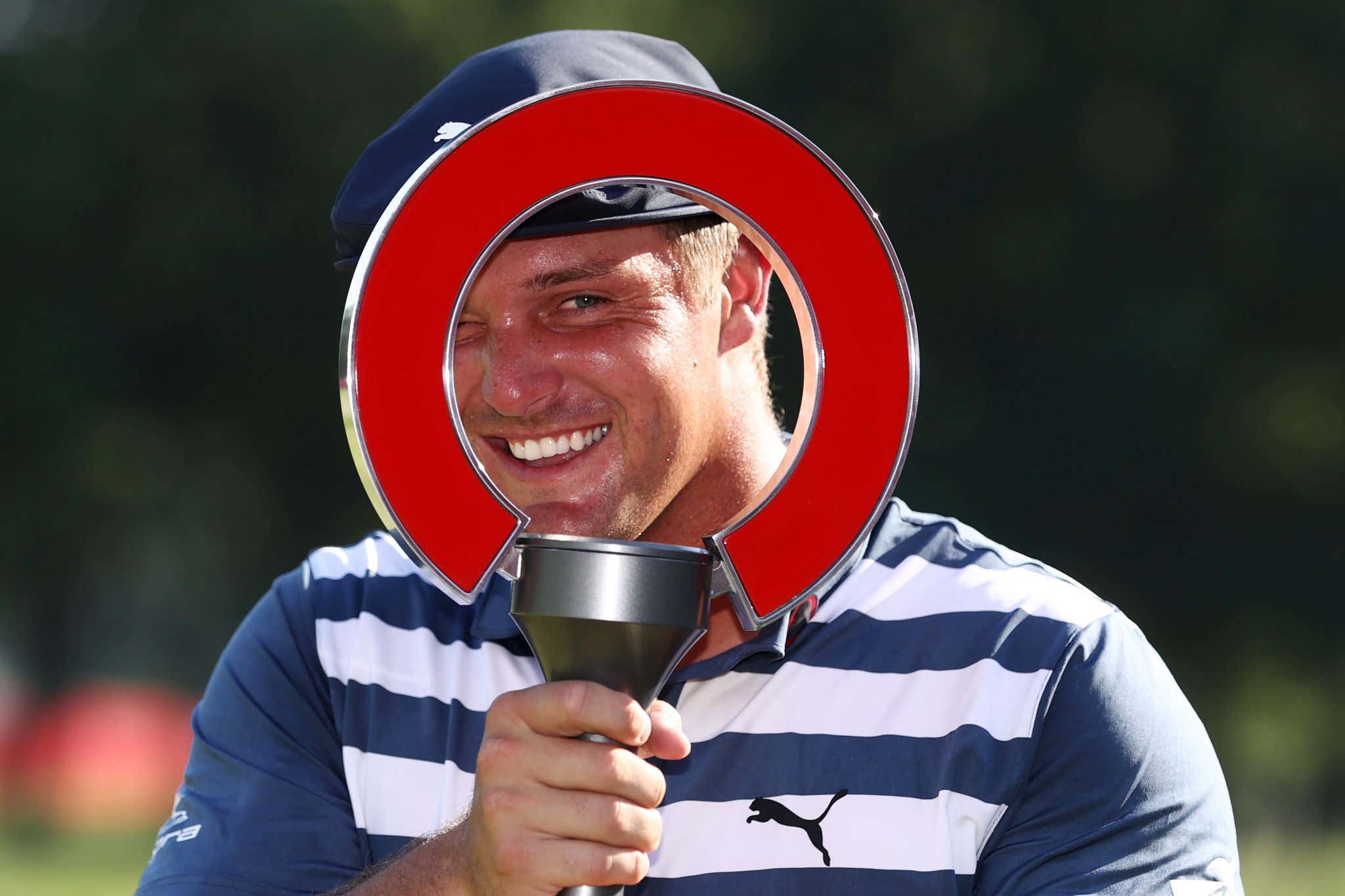 That's such a ridiculous picture. Makes me laugh. It's bad enough for me to give it a 7/10.

Naturally, Bryson DeChambeau is your heavy favorite at the Barstool Sportsbook at +750.

That's not a great payout but this feels a lot like the US Open where all the stars are aligned for a guy. This could very well be Bryson's week again. Take him if you please.

I'm gonna ride with Will Zalatoris +2500 though. The praise when Will Z came on to the scene was all about his ball-striking, but he's sneaky long too. 24th (out of 206) on Tour in driving distance at 306.9 yards per drive and 34th with +.349 strokes gained off the tee. He was the hot pick to break thru for a win after his Masters performance and that was reflected in his weekly prices, but I think the heat has simmered a bit where +2500 is a good payout in a weak field event. He's still in that bizarre (and stupid) spot where he can't play in the FedEx Cup playoffs unless he puts a W on the board, so you're probably going to find him in fields like this one and motivated to get it done. Plus he's fun to root for. Let's go Will Z.

Garrick Higgo Group E Winner +375 (over Si Woo, HVIII, Kirk, and Griffin) - I'm addicted to Higgo. Longest odds of anyone in this group. Haven't seen any of those other guys win this month. Leggo Higgo.

Cameron Champ To Win +15000 - Length. Cam's having a terrible year but so was Kramer Hickok. Worth a shot at these odds.

Matthew Wolff To Win +2800 - This tournament really was Wolff's to lose last year as the 54-hole leader. And then he lost it. Weaker field this year should give him a chance to right that wrong.

Round 1 Bryson DeChambeau -210 over Kramer Hickok - Come on. Hickok was a great story last week but this price is ridiculous.

Albatross In The Tournament +1200 - These Par 5's are gettable. Albies are fun. Let's ride.

Special Edition Irish Open Picks: Rory +450 and Richard Bland +8000. - Rory grew up going to watch Tiger at Mount Juliet and Bland's price should be shorter despite his fallout on the weekend at Torrey. The favorite and a longshot. If you're feeling brave, toss in American (and defending champ) John Catlin +8000 while you're at it. Hopefully that gives you a little sweat to wake up to on Sunday morning. Great tournament to get yourself into links golf mode ahead of the Open.