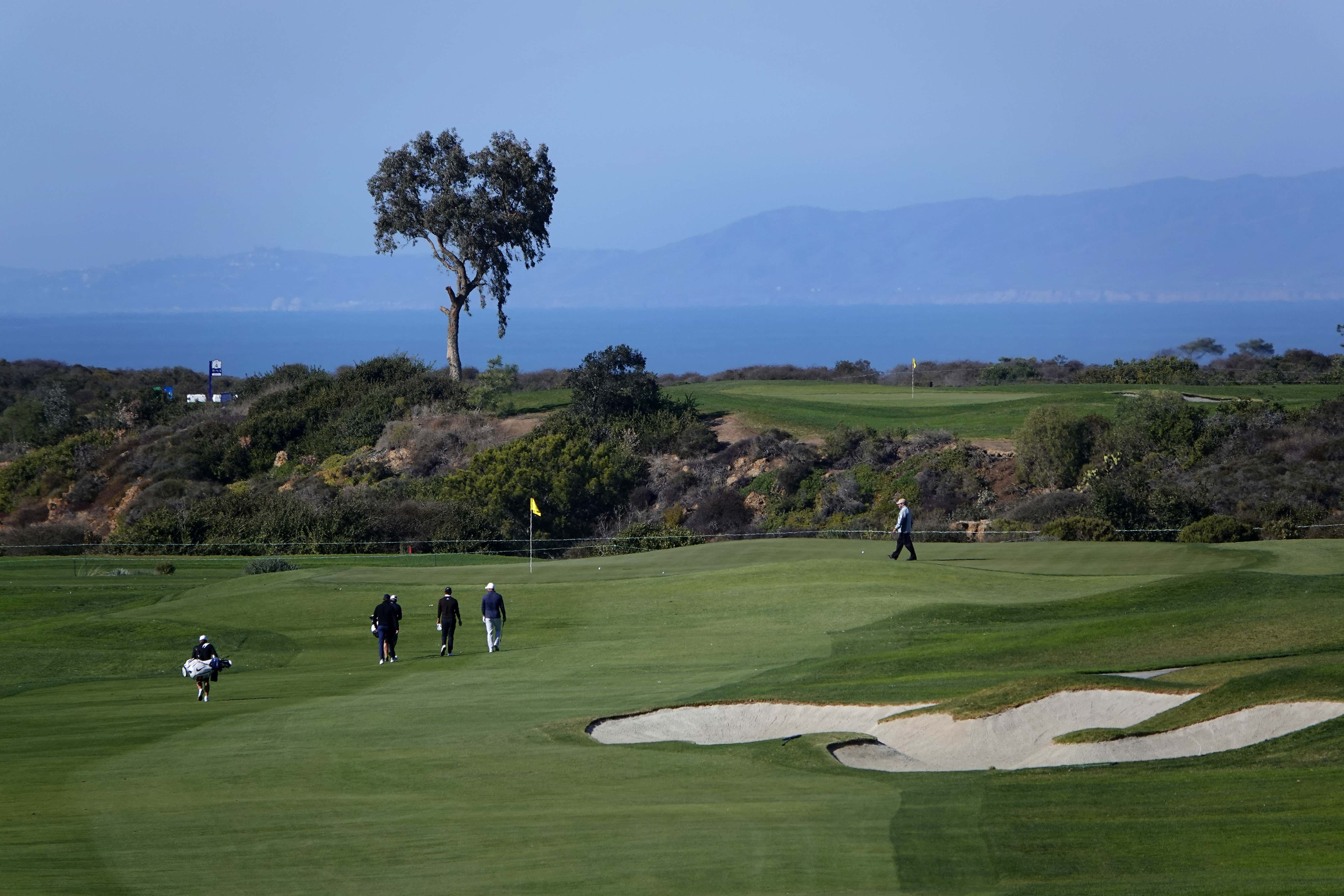 Championship golf baby!!! Nothing like it. The PGA delivered in a big way last month at Kiawah and Torrey Pines is sure to as well. This is one of the top public courses in the country. We see it every January at the Farmers Insurance Open. Patrick Reed was the victor here the same week he set the sports world aflame with another rules controversy. Torrey was also the scene of one of the greatest (if not the greatest) major victory in the history of the sport back in 2008. More on that later. Lot to get to here so here's some quick historical info about the US Open and Torrey Pines. 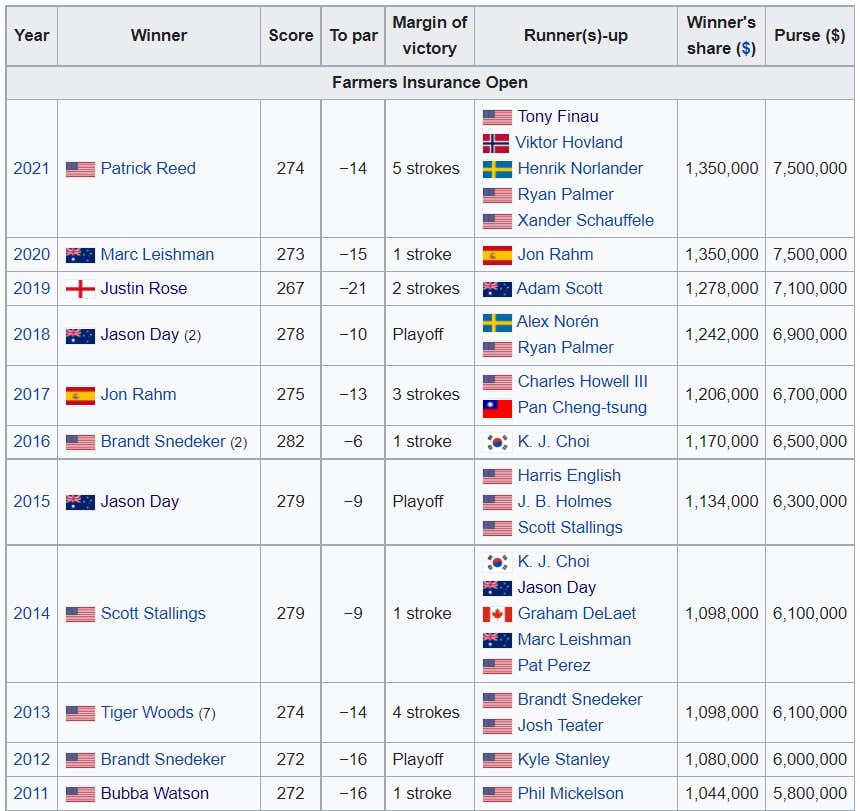 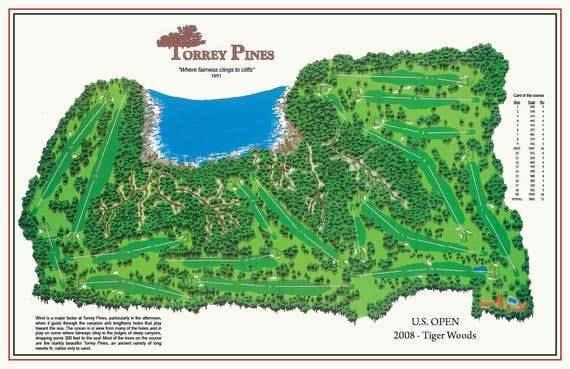 Torrey Pines South is a phenomenal course out of La Jolla, CA. It's basically San Diego. Which means the weather is awesome year round and makes for a terrific US Open locale because it's never too hot in June. The marine layer that sets in is fucking sweet too. Unreal scenery of the Pacific outchea.

This is traditionally one of the longest courses on Tour. It's been known to play as long as 7,700 yards as a par 72. This week they're shortening #6 up a tad and making it a 515 yard par 4… which brings our total to 7,652. That's crazy long for a Par 71. Clearly that favors the longer hitter. When you start to factor in the profile of a US Open winner…. that feels doubly true this week. Kikuyu grass can grow a bit thicker in June than it can in January and that will favor the bombers who can hit their approaches with steeper angles of attack and higher club speeds. You want a look at the gnarly stuff? Look no further:

Another major factor is the poa annua greens. You're gonna hear the term poa annua a ton this weekend. Why does that matter? Well it's a type of grass that grows quickly and tends to "bud" a bit as the day goes longer. That can cause putts to bounce around like a pinball late in the day. If you watch Tiger's iconic playoff-forcing putt in 2008 closely, you can see that thing move all over the place.

Inherently this can give players earlier in the day a minor advantage over players who play late. Data per the PGA Tour shows the following:

If you're looking to throw down on a first round leader or are able to find a round matchup with split tee times, might be wise to take a morning guy.

In my January preview of the Farmers', I chose the 3rd hole. That hole still fucks.

This week I'm showcasing the final hole that gave us that iconic moment back in '08. I love par 5's and this is one of the best finishing par 5's on planet Earth.

The location of the pond and the punishing rough here make it pretty much mandatory to hit the fairway if you want to get home in 2. That's how a par 5 should be imo. The green slopes pretty severely towards the pond, so certain pin positions can get dicey if you're hitting a wedge 3rd shot in. I'm fascinated as to where they putt the pin on Sunday. Usually at the Farmers' it's in that front left corner where Jon Rahm made his massive putt to nail down his first career win. Sunday in '08 featured a front right pin that didn't necessarily require players to fly it over the pond. Who knows which they'll go with?

NBC is all over this one. That Moving Day schedule is SICK. Wall to wall golf. Getting primetime golf is terrific too. We don't usually get West Coast golf in the summer. Chambers Bay was a treat in this regard back in '15 and this will be too.

Tiger's Insane Highlight of the Week 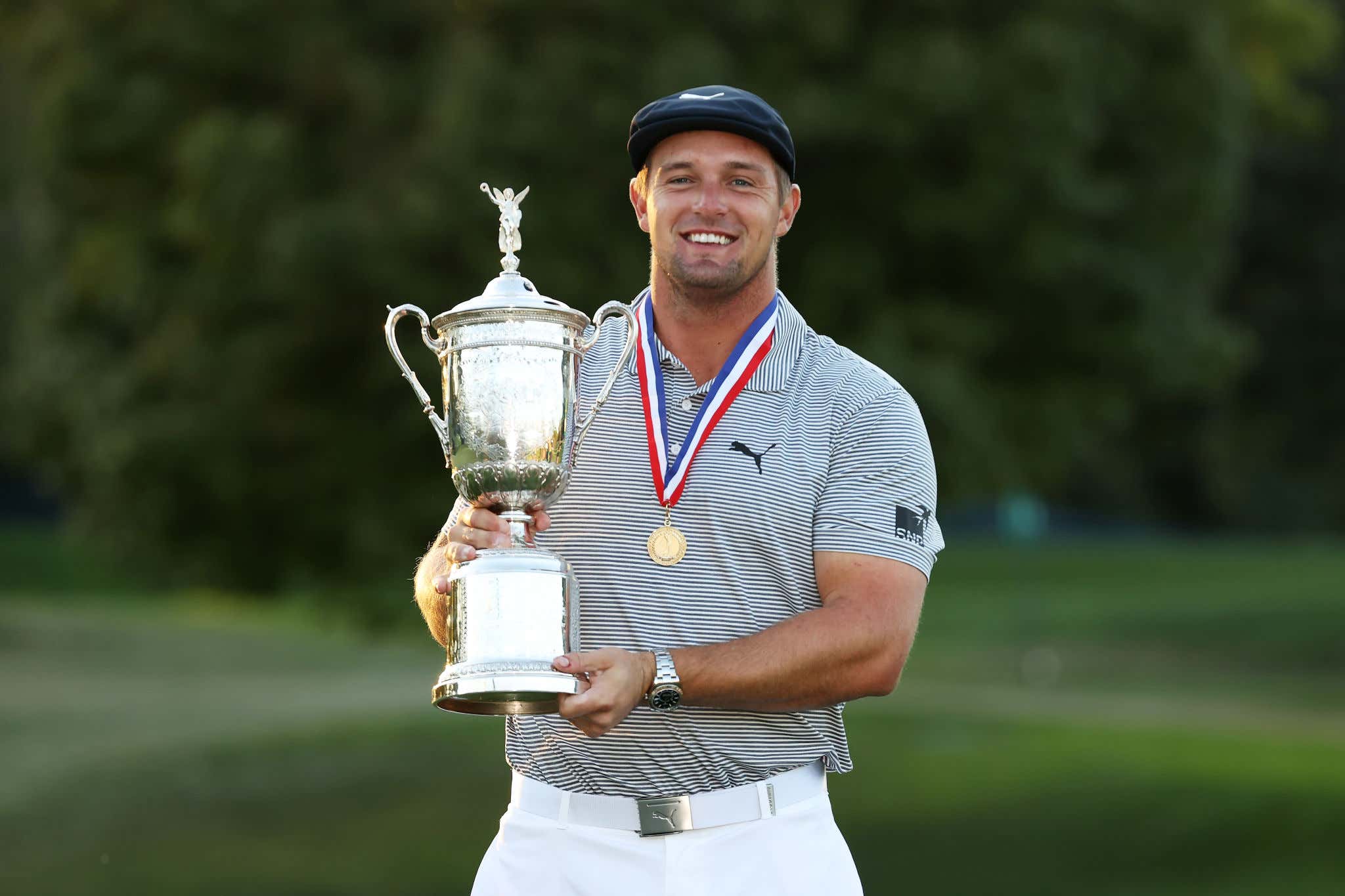 It's glorious. This is the one. This is the one ya dream about. Legendary characters from Hogan to Nicklaus to Palmer to Woods hoisted this thing. So many trophies want to be this one but there's only one. 10/10.

Jon Rahm is your favorite at the Barstool Sportsbook at +1000 by a solid margin over Bryson, DJ and the X man. It's an interesting position. He obviously was playing out of his mind at the Memorial 2 weeks ago. He hits it a long way and has phenomenal course history at Torrey Pines. In 5 starts here he's got a win, 3 top 5's and another top 10. Never finished worse than T-29.

But something I'm fascinated by is how little any of that course history matters this week. The set-up proved to be dramatically different between the Farmers' Insurance that Tiger won with a -19 score in 2008 and the -1 score that ultimately earned him a spot in a playoff in the US Open.

Taking that a step further, the other guys who finished in the Top 10 of that US Open mostly had horrific course history at Torrey Pines under the Farmers' Insurance set-up both before and after that US Open. There was no correlation between Farmers success and US Open success. From Dave Tindall at Betfair: 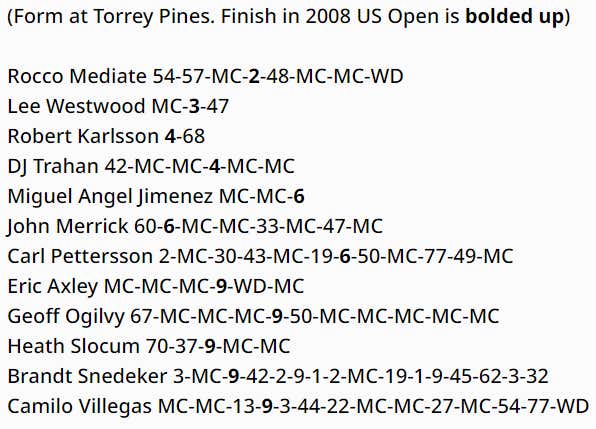 Doing some back of the napkin math here, the guys who made the top 10 in that 2008 US Open historically missed more cuts at the Farmers' Insurance than they made (42 of 82 missed cuts). If you take Brandt Snedeker out of the picture, they missed the cut 60% of the time and collectively have a whopping 1 Top 5 in 67 starts. And for the most part this was not a list of slouches either.

That right there suggests that you can probably throw results from the Farmers' out the window as you handicap this tournament. Not saying that you should preclude guys who have had success at Torrey either, I'm just saying that it shouldn't be the primary basis for your picks. Rahm's game is probably a fit for any US Open set-up and he'll play well this week, but I think that +1000 number is a little inflated due to Torrey Pines history that probably doesn't matter this week.

Call me crazy, but I am going to roll the dice and go with my guy Tony Finau at +2000. Of all the major championships where I think he has a chance to break through, this is the one. He's played well at the longer US Open set-ups, finishing 5th at Shinnecock in '18 and placing T-8 at Winged Foot last summer. His game fits the profile that I described earlier - high clubhead speeds is the name of the game. Plus he's historically played well at courses with Poa Annua greens - Shinnecock is Poa Annua and so is Riviera where he's finished runner-up twice. This no FOMO pick. This is the real thing. We all know how it'll probably end so we'll take him Top 10 +188 to be safe as well.

I'm also having a really tough time laying off of Justin Thomas +2200. I just don't think JT should be less than +1600 on any course. His recent play hasn't been outstanding but him winning the PLAYERS wasn't that long ago. He's skipped the Farmers' every year since 2015 so maybe that's why he's handicapped where he is, but I've already laid out why that shouldn't matter. JT is a guy who seems sure to win at least a couple more majors in his career so why can't it be this one? He's still #2 in the world. Too good a price to leave alone.

Bryson DeChambeau Top 10 +163 - He has just as much an advantage over the field as he did at Winged Foot last year. The Big Golfer was built to play tough courses with long rough. Bay Hill was a great example of that. Wouldn't be surprised if he wins again.

Will Zalatoris Group E +300 (over English/Kokrak/Berger/Simpson) - Finished T-6 at Winged Foot last year. Know I had a whole schpeel about the Farmers not mattering but he went T-7 there too. He's Top 10'd in all 3 majors he's played since getting his Tour card. Stones.

Phil Mickelson Missed Cut -110 - * ducks * … I don't think casual golf fans understand how far out of left field that PGA win was. It was incredible. By no means am I trying to take anything away from the legend. But that just might have been the last big W of Lefty's career and we should it appreciate it as such. The cut is just 60 players this week in a 156 player field, so this is a sharp play.

Robert MacIntyre Top Lefty +450 - Your lefties this week are Brian Harman, Higgo, Phil, Bubba and Bob Mac. Bob has the longest odds of any of these. I don't think that should be the case. Higgo is the real threat here in my eyes at +275 but he may be riding too high off that Congaree juju. I'm addicted to betting Bob Mac in majors and I don't care who knows it.

Playoff +400 - Haven't had one since that legendary 18-hole showdown between Tiger and Rocco. The format is now just a 2-hole aggregate, which stinks. But we're due. Almost nailed this one last week. We're due.

That's what I got this week. Enjoy the US Open Championship.

PS: Had Max Homa on my podcast this week to talk Torrey, golf beefs, and plenty more. Give it a listen, would ya?