This is just some clean, old-fashioned chirping. I actually came away from this video with a healthy respect for both parties. This kid got in a nice shot across the bow and Bregman rolled with it and actually seemed to think it was pretty funny. He was trying his best not to laugh. 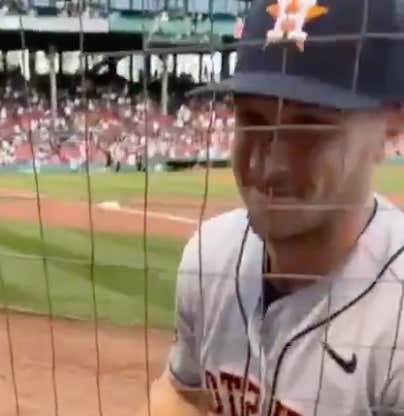 That's what all these Houston guys have to do at this point. They were cheating and got caught, so now you have to deal with stuff like this on the road. And as long as they're able to handle it like this, I think many people will start to hate these guys at least a bit less than they have since this whole ordeal came out. It's over and done with, so just be able to laugh at yourself when the chirps are at least not too mean-spirited.

But what a move from this kid. That's a multiple-time MLB All-Star coming over willing to take a picture with you and he just flipped that situation on its head and said he was the captain now. You have no choice but to respect it.