On yesterday's Dave Portnoy Show, Dave had on some of the new interns to talk about their now infamous TikToks. Intern Shaun is the one who ended up getting it the worst. Here is his for the boys TikTok if you haven't seen it yet.

The main Barstool TikTok account ended up posting a clip from the Dave Portnoy Show where Dave rips into Shaun, claiming it was the worst TikTok he's ever seen and telling Shaun that he came across as an incredible loser in the video.

Shaun took his beating and moved on. Didn't cry. Didn't pout. Didn't say Dave was too mean to him. Took the lashing and learned his lesson. He still has a full summer ahead of him being an intern where I'm sure he'll work hard and be successful. But the Internet, specifically TikTok, has taken it upon themselves to be offended on behalf of Shaun. Here are some of the comments on that above TikTok. 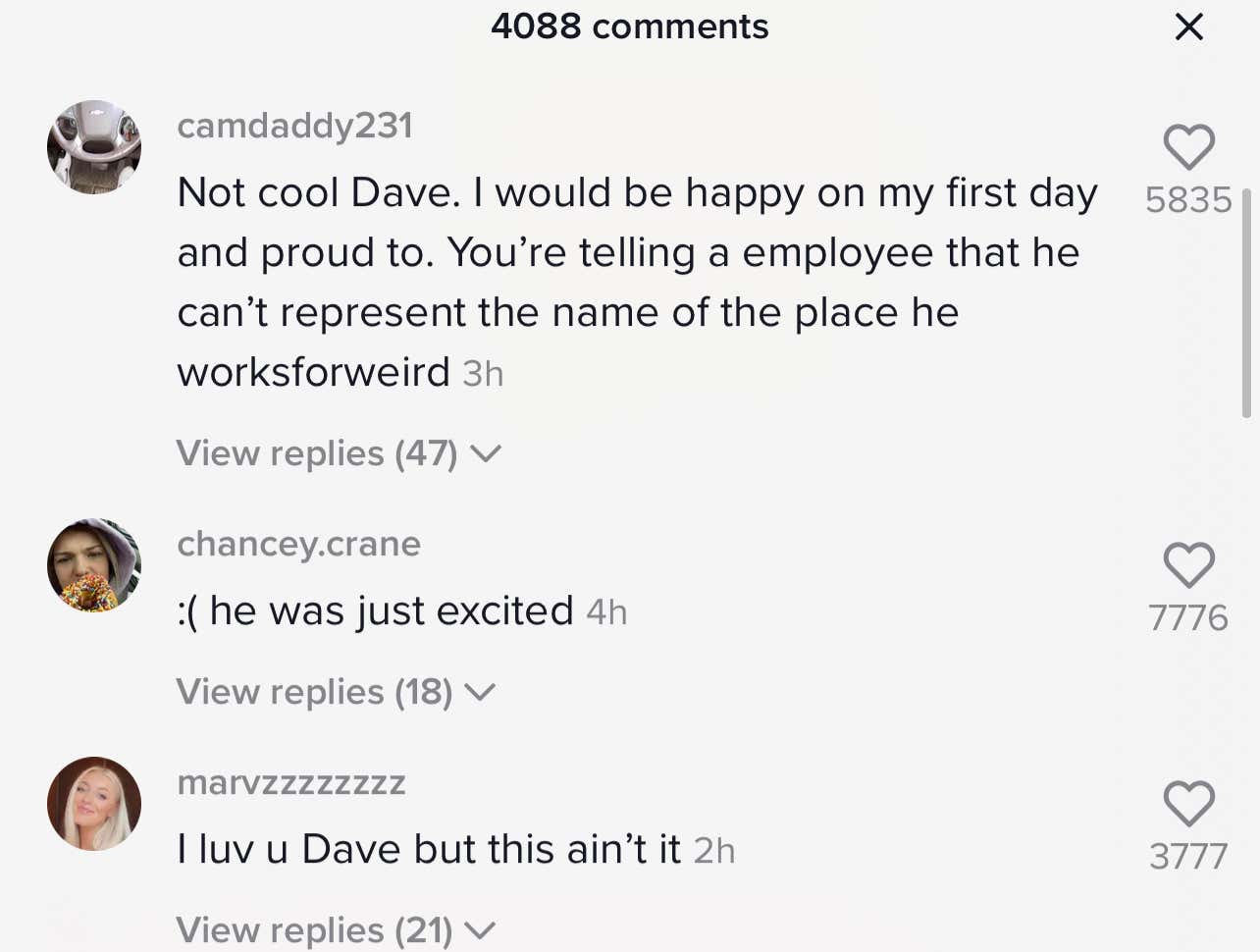 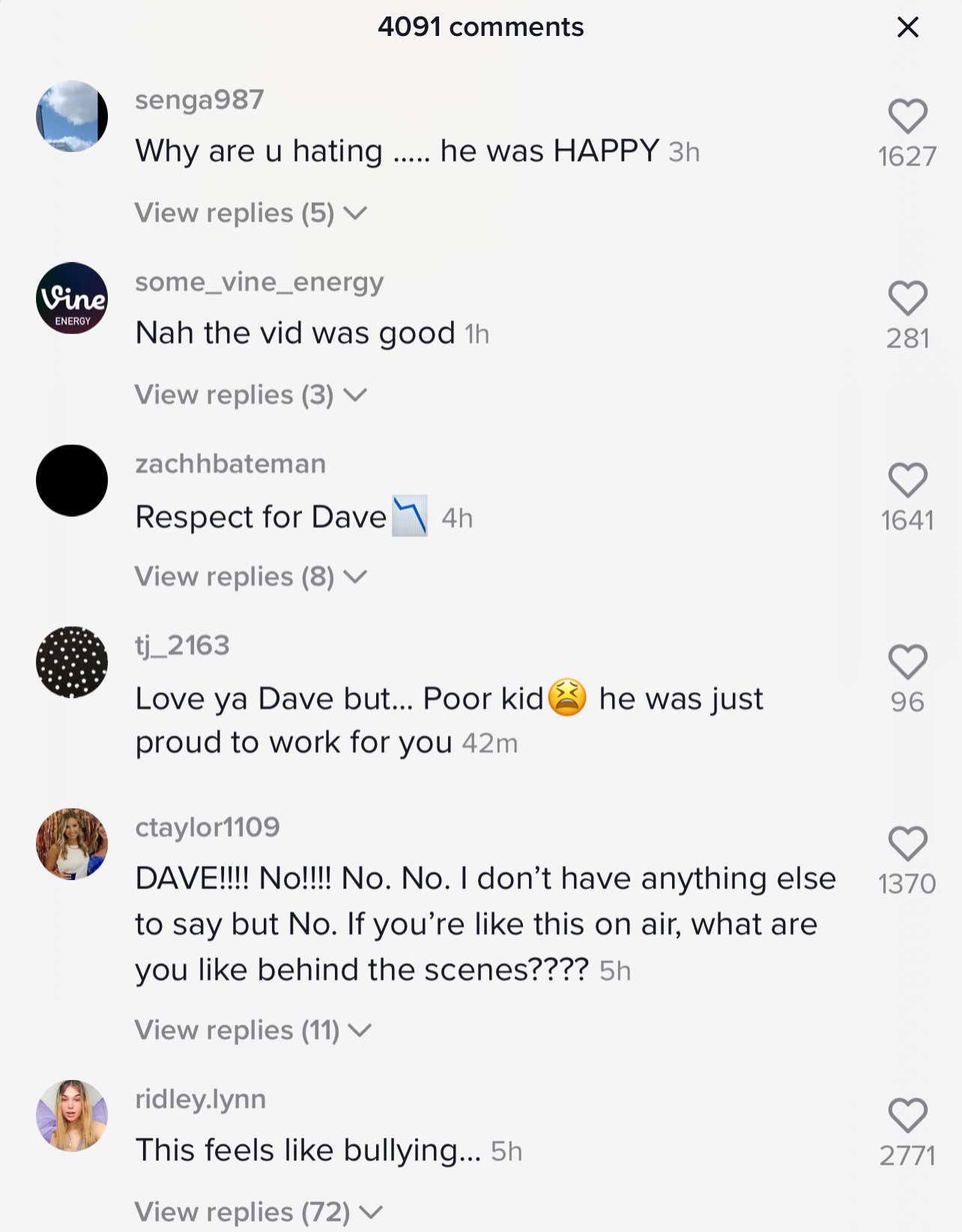 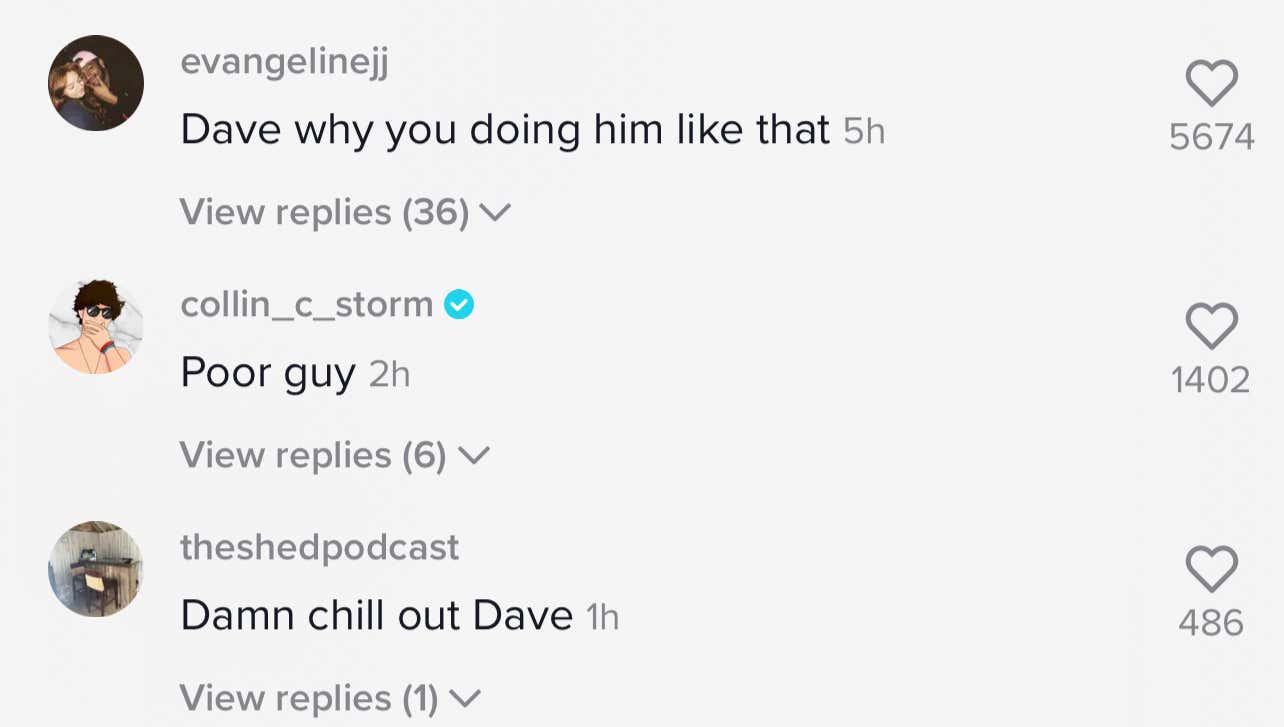 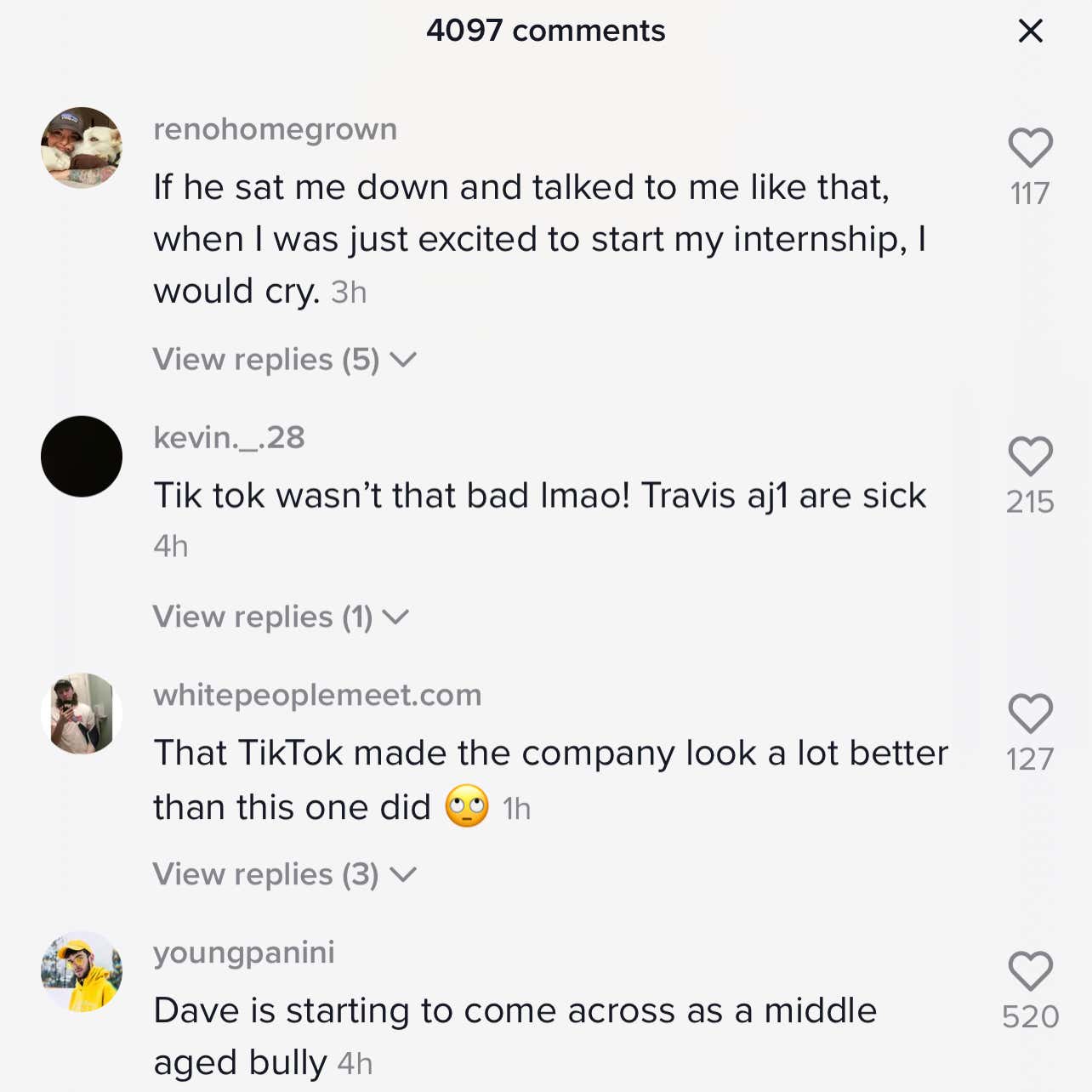 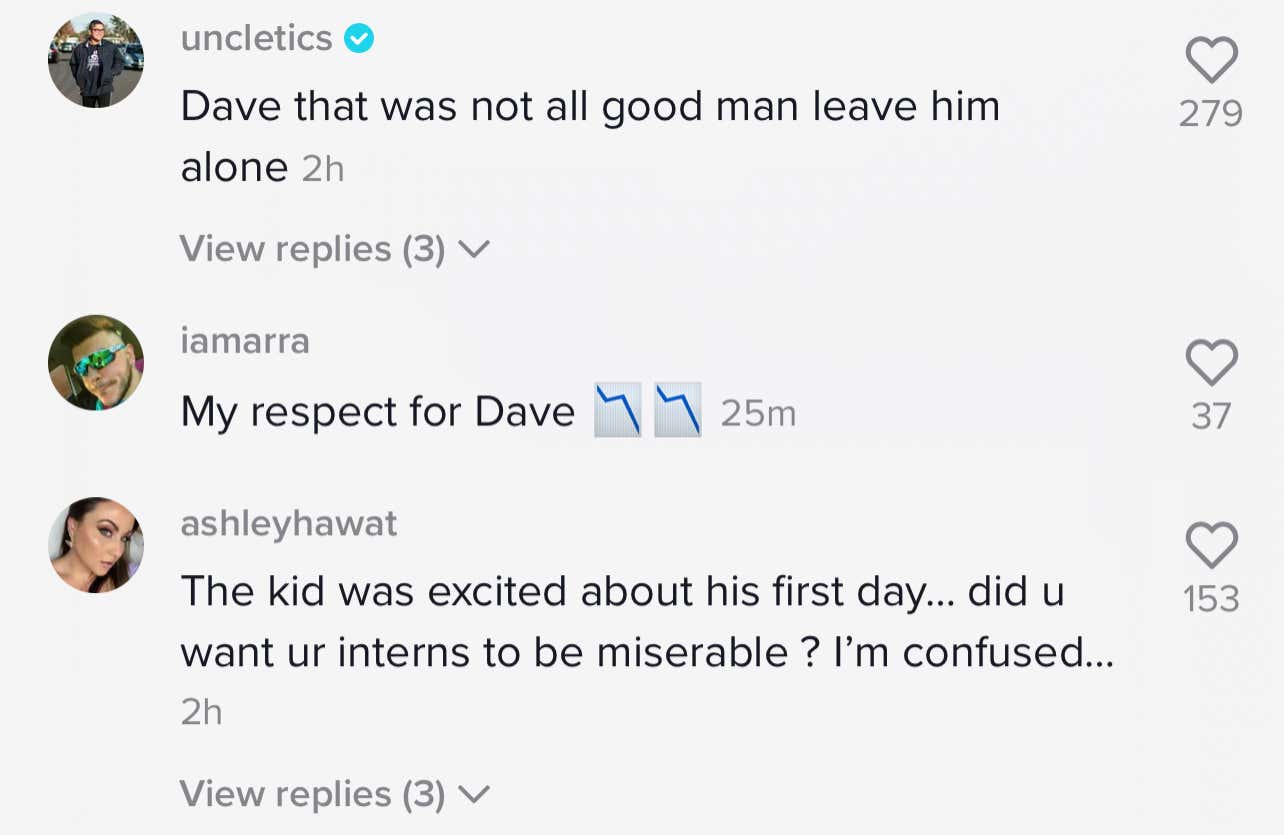 It's honestly kind of a testament to how far Barstool has come where there's so many new fans who see a video like that and think Dave is being too mean. THAT is too mean?!? Dave handled that way nicer than I think most old school Stoolies expected. Dave vs. interns is a tale as old as time.

Can you imagine the reactions if TikTok was around when Dave taped Hank to a wall or threw a wallet at Blind Mike's face?!?! People trying to turn this into some huge issue about the mistreatment of interns is absolutely asinine. Barstool interns have it better than interns at pretty much every company in the world. Yeah maybe you need to be prepared to get dragged publicly if you do something stupid but that's a minor price to pay for all the positives that come with it. A new intern did something that Dave thought was bad for his company, he scolded him for it, and they moved on. I actually feel bad for Shaun because it's not like he was butthurt, and now he has people being offended for him.

As someone who has first hand experienced a Dave lashing as an intern (and then a physical lashing a few years later. Go Broncos), I can attest that being an intern at Barstool really ain't so bad. I kind of just shut my mouth for 7 months and did my job as a social media intern for Gaz. Then I got called Alarmingly Stupid by Dave on The Rundown, which was well deserved and more funny than anything. Kept my head down and continued to work, and eventually was able to work my way up through being the Voice of Fordham and then a good luck charm.

Now sure that TikTok may have come off as rather self-masterbatory, but the point was more to prove that there's a clear path to succeed at Barstool as an intern if you shut up, do your job, and hopefully get a little bit of luck. And I'm not even the best example of that. Other interns obviously had it worse than being called alarmingly stupid. Hank, for example, went from being duck taped to a wall and being an overall whipping boy in Milton to being the producer of the top sports podcast in the world. Barstool constantly breeds great American success stories, and hopefully one day Shaun and his Travis's will join that illustrious list.