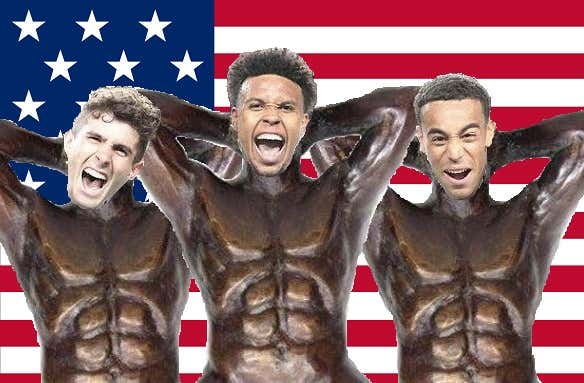 I know that doing things like "caring" and "speaking from the heart" are frowned upon these days, especially on the interwebs, but I'm gonna do it anyway for a few minutes so bear with me.

Let’s be clear on this: I have always loved the US Men’s National Team and will always love them. The fact I continued to love them after what they did to me – and to all of us – on October 10, 2017, in Trinidad (or was it Tobago?) proves that beyond a shadow of a doubt.

However, anyone who has ever watched a sappy Lifetime movie knows there is a big difference between “loving” someone and “being in love” with them. Don’t believe me? Just ask one of your married friends. Which one? ANY of them. ALL of them!

Back to USMNT. The sad truth is that our relationship had perhaps grown a little stale over the decades that we have been living with one another. Oh, sure, they would give me a real good effing every now and again. I was walking emotionally bowlegged for a week after we lost to Canada in Concacaf Nations League qualifying in 2019, for example.

But something was missing. The spark was gone. There were no more butterflies. Mostly just frustration and trepidation about future frustration. I was not getting excited to see them play anymore.

This past week changed all that. And the weirdest part is it wasn’t until this morning that I realized I didn’t just love USMNT anymore… I am totally, completely, officially head over heels in love with the USMNT again.

At this point you are probably wondering what led to this romantic epiphany.

“Sooooooo was it when we started a gaggle of young talent against Honduras?”

No, definitely not. Winning is better than not winning and it might have had my heart pumping at the end but that performance did not come anywhere close to setting my loins a-tingling.

“Sooooooo was it when this gaggle of young talent fought back from two different deficits to curb-stomp the hearts of our bitter rivals into bolivian in extra time on Sunday?”

That would make a lot of sense frankly. But believe it or not, nope, that also was not the moment my USMNT-loving heart grew three sizes.

Well is sure as helllllllll wasn't the 4-0 dismantling of Costa Rica's B-team last night…. so, ummmmmm, what was it? Did the love of my life get a new high-paying job and suddenly start spending oodles of money on me? Or maybe slap on some breast implants to spice things up?? How did I suddenly come face to face with the realization that I am truly, madly, deeply in love (if not lust) with USMNT again???

The answer may surprise you. It was this clip that arrived in my DMs this morning from Sunday's game against Mexico:

Everybody knows The Babyjesus went on to smash the 114’ penalty into the upper corner… but it was this clip sent to me by my man Shane this morning that flipped some sort of switch. Something about Diego Lainez walking up hoping to talk sh*t and get in Pulisic’s head before the kick, and Tyler Adams swooping in like a bouncer asking “who do you know here?” then tossing Lainez out the club triggered some long-forgotten feels deep down in my soul.

Everybody knows this team has quality – probably more pure talent than any USMNT ever. But that game showed they are more than just talent and "potential" and "upside" and other cliché buzzwords. More than half of the starting XI against Mexico was eligible to play this spring for the US in (u23) Olympic qualifying… but they couldn't because they were too busy playing in Europe (subtext: because they are that good). Yet despite being a bunch of relative n00bs, they fought back not once but twice in situations where far more experienced teams have folded.

So yes they have tons of talent. We already knew that. Now we know they got heart. They got grit. They got character. And they care just like you and me. We all know that John Brooks and Weston McKennie are ready to scrap at the drop of a hat, but Adams getting in the mix when needed shows the depth of leadership this group now has. Smarter people will have already put all this together in their minds but for me it was that clip that really brought it home, and now my heart is full.

The haters are gonna come out of the woodwork whining about it just being “one win” or “Nations League” or what have you.

This really is not about that game, or even the trophy. It has been a long, hard 4+ years for American soccer fans. Thank god for the women giving us something to cheer about but on the men’s side it has been mostly just idle chatter about things to come.

Well, guess what. We ain’t "coming". This is about the USMNT letting everybody know that we are here, we are fun, we are for real and we are going places. There will be setbacks and bumps along the way. Those are inevitable for a young team like this. But most importantly of all this isn’t some “golden generation”. This is the start of a GOLDEN ERA.

Thanks for coming to my American soccer TED Talk.

Reminder: USWNT are about to lay a pounding on Portugal tonight and then the Summer of Soccer continues with the Euros kicking off tomorrow and Copa America starting on Sunday. Bless up.