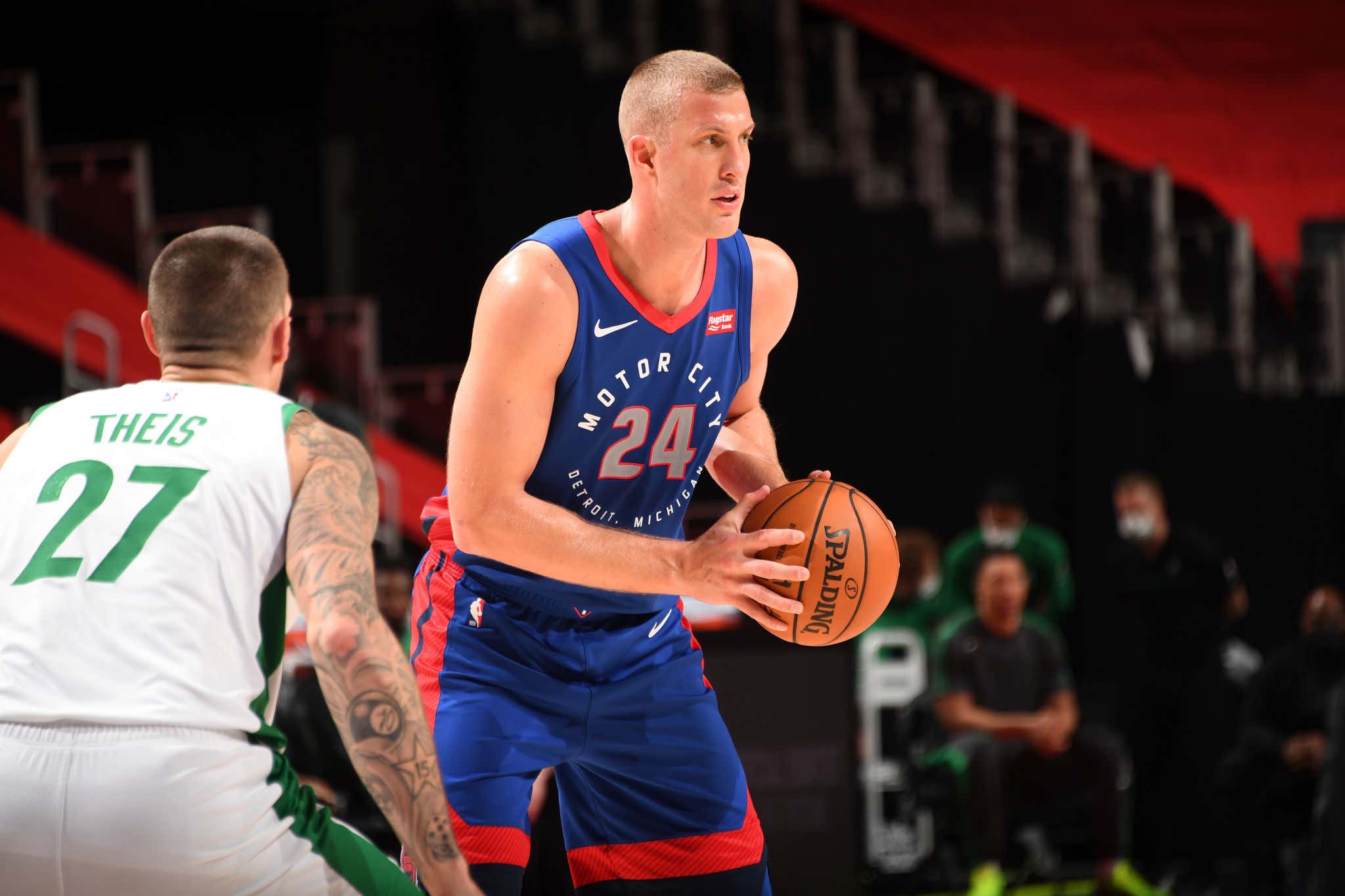 As I like to do when it comes to the Celts and their big offseason/confusing salary rules, I find it helpful to read people way smarter than me. If I want to come up with takes, I at least want them to be informed takes. Of course, Brad Stevens has a long laundry list of things he has to address this summer, and it obviously starts with finding a new head coach. We've talked about that already and who might be an option, which brings me to something I read this morning that every Celts fan should also read so we can all be on the same page.

Hopefully if you're a Celts fan reading this blog you already know who BRobb is, but for a dumb person like myself who gets very confused about the NBA salary rules and whatnot, I always like how BRobb breaks it down. Him and Keith Smith do God's work in that regard. I suggest you all give that a read if you're a dumb person like me. The big takeaway I got from that piece is when it comes to the last $11M of the Hayward TPE, you can pretty much rule out any sort of sign & trade while also keeping Evan Fournier. If the Celts want to keep Fournier and still add players with that TPE money, they already have to be under contract. That's the biggest key.

So then I started thinking of who those players even are. I decided to break it down into two categories, bigs and ball handlers. While we have no idea what the roster will look like in terms of who is even still on the roster, chances are this team will still have a need for bigs/ball handlers moving forward.

As a reminder, for the Celts to pull this off, they have to give something up. Could be a player, could just be picks, everything is on the table. In my opinion, the more years left someone has on their deal, the higher the price might be. So for this exercise I looked at everything. Guys who enter last season in the final year of their deals as expirings and guys that have years left but still might be available based on team situation. I just think it's very important that as we enter this offseason and we talk about the Hayward TPE money, we have the right sort of expectations.

With the health issues of Rob not going anywhere, it was clear watching this team post trade deadline that big man is a serious need. Looking at the landscape of players, there are certainly some intriguing names.

My thought here is that the Pistons are rebuilding, they did draft Isaiah Stewart last year and a lot of mocks I see have them going with Evan Mobley, the center out of USC if they were to land the #2 pick. That tells me someone like Plumlee might be available. Here's the thing. You hear the name Mason Plumlee and your first reaction is to laugh. I get it. But the truth is, Plumlee was actually pretty damn solid for the Pistons last year. You know what you're getting with Plumlee, and I think he really fits how Brad likes to play.

For starters, he has experience coming off the bench and starting. That's important given Rob's situation. He's a legit rebounder and a pretty solid passer out of the center position. That was a huge piece that was missing when Rob went down and they were forced to play more Tristan Thompson. We've seen how this roster looks when they have a big man at the 5 that can pass. I'm intrigued with Plumlee's ability to do that. He also plays hard as shit, something that this roster could definitely use. Could he be had for maybe an end of bench guy and a 1st rd pick? I don't think that's insane, especially if the Pistons draft a center.

It's hard to know what the hell the Spurs are doing. Are they rebuilding? Are they bringing back DeRozan and trying to get into that 7/8 range? Too good to tank but not good enough to contend. If they are going the rebuilding route, Poeltl should certainly help in the effort to bring in assets. He's only 25 and made real progress this season. He's much more of a rim protector than Plumlee and more of a traditional big I would say.

In my opinion, to even get the Spurs to consider trading their starting center, it's going to cost you something pricey. Definitely one of your young wings and a 1st, and probably some additional filler as well. But his age does fit the Jays timeline. It would allow you to have a legit starting center insurance in the event Rob gets hurt, and you're banking on the idea that now that he got real opportunity, he's only going to get better.

JaMychal Green was always a name that intrigued me when he played for the Clippers. What I like is his ability to stretch the floor, he's a career 52/43% playoff shooter, and he would work as a small ball big. I'd much rather go with him then someone like Grant in that role. The question is how willing is Denver to unload a rotation player? Some of the mocks I've seen have them taking a PF/C at the end of the 1st, and this all has to do with what Paul Millsap does. If they keep him, I think Green could be had. If Millsap leaves in UFA, he's probably not going anywhere.

From a skillset standpoint though, he's intriguing.

Personally, I'm not that interested in Harrell. I believe he's completely unplayable in a playoff series but he fits this exercise so here we are. Guy can't defend the P&R to save his life and that's not changing anytime soon. But there's also no denying that he can be impactful during the regular season as a high energy reserve big. He's proven that much. Considering the Lakers want nothing to do with him, my guess is he's available. His situation is unique in that he has that player option for next season, but I'm not so sure a higher salary is out there for him. I wonder if he opts in, and then the Lakers move him. Then again it doesn't sound like Andre Drummond or Marc Gasol will be back, so maybe not.

My thought process here is the Clippers fail to reach the WCF and they are forced to blow things up a little bit. Given what they had to pay to bring in Paul George, this team needs picks. He has to opt into his player option of course, but can the Clippers risk him leaving in 2022 for nothing? This might be the kind of situation where they want to get ahead of it and need some picks/low cost talent in return.

From a skillset perspective, when Ibaka is healthy, he can help. Good rim protector, championship experience, can stretch the floor etc.

You'll notice I did not mention Larry Nance Jr. He would top my list, but I do not think the Cavs move him for anything you have to offer.

Going this route certainly depends on a few things. Is Fournier back? What about Smart or Pritchard or Nesmith or Romeo? If all of those guys are on the roster as we start next season, I do not think it makes that much sense to go ball handler in terms of guard/wing. I'm just not sure how likely that is, so here are names that intrigue me

I'd say it's a longshot that the Grizzlies are looking to move their one of their starters who just had the best year of his career on a team that is on the upswing, but I did see they were mocked to take a 6'8 SF, which is basically what Anderson is. I then wonder if Desmond Bane is ready to take that leap next year and they bring him in to be the starting SF. It's a big "if" I know, but if he's at all available, I'm in on Kyle Anderson. Can play the 3/4, is a decent outside shooter, good passer, and he's efficient. That's what this offense needs. Efficient scorers.

Ah yes, the Pacers. Wouldn't be it poetic for the final piece of the Hayward TPE to actually be used on a Pacer after all the bullshit from last summer. Obviously if you're going to be bringing in a SG/SF, someone on this roster would have to go. If that is the case, Lamb looks fine after his ACL injury and would provide some fine bench scoring depth. I'm a little concerned about his career 34% three point shooting, but you have to take the good with the bad when it comes to this exercise.

Look, I won't pretend to suggest I have any idea what the hell the Kings are doing. Nobody does. I'm not sure they even know. But considering he was pretty good for the Kings and they have this weird mindset that they are going to run it back next year and get into the top 8, the chances of him being moved are slim I would think.

Skillset wise, I'm in on Wright as well. He has good size at 6'5, he can play both on ball and off ball, a decent passer and he's fairly efficient. I think this would really help avoid situations where you're asking 5'10 point guards to defend in a playoff series.

To be honest, barring something crazy that none of us can predict, that's pretty much the market as far as I can tell. Having $11M isn't a whole lot, but it's not nothing either. You can find a contributing piece, the challenge is more finding a team willing to dance with Brad. Who knows, maybe teams are more open to doing business with the Celts since it's no longer Ainge on the other end of the phone.

The point is, as we get closer to free agency and this becomes a more real topic, keep these sort of names in mind. Set your expectations accordingly and pray for the best. The only real disaster outcome is the TPE not being used and it expiring, while Fournier also leaves for a bigger payday. That's just as likely as the Celts bringing in any of these guys, I just want to make that clear.