I feel like we need to make one last public statement about these uniforms so excuse me while I make it. My brain should be preoccupied with hard hitting quantitative analysis surrounding the Cubs bullpen. Or how David Ross has perfectly captured the essence of the X factor in a Major League Baseabll dugout. Or how the division is going to be a slugfest down to September or the impending trade drama. So much going on right now but nothing moves the needle more than pro sports uniforms. That's a sad reality for a guy like me but same time you have to be flexible. You have to know when to pivot. I'm willing to make a big deal out of these because I know it's important to you guys.

First off uniforms are a big deal not just in sports but in life. I went to Catholic elementary school so some of my earliest memories are in uniform. It sucked. Grey slacks with a nondescript white polo and black hush puppies. Only good thing was having gym on Tuesday and Thursday. By 5th grade people were so sensitive that you got to wear gym uniforms to school on gym days because changing in a locker room meant instant bullying. I'm not a pro-bully but the locker room scene as a young man can be chaotic. I mean guys throwing literal shit off the literal walls. Being young is a license to just go completely off the fucking rails.

No wonder you put kids in uniform as much as possible. Part of me thinks my mom and dad signed me up for so many teams just so I could get a number assigned to me. "Hey 22 it's time for dinner." Such an easier and more effective communication arrangement to differentiate between other children. Uniforms are there for a reason guys.

Personally I always found baseball uniforms to be a little silly. Pants up or down? They're tight fabric and it's really hot in the summer. Nobody ever felt refreshed in a baseball uniform. You feel DIRTY and INCONVENIENCED and all those great qualities us pussies have lost touch with. Baseball still keeps it going though. Metal spikes and an absurdly high-quality fitted hat with polyester fibers so strong only a Cold War could've innovated them. Now I would ask you to put on 6 pounds of chain, eye black, a pair of batting gloves and a custom pair of designer sunglasses. That's your textbook baseball uniform and it's objectively hilarious we make the managers fall in line. Not even the guy calling shots can wear a pair of flip flops. He's fully saddled head to toe like the player/coach hybrid never went extinct. Don't even get me going on the 1st base coach.

That's why I think the players should disavow all versions of alternate uniforms, especially those announced midseason. This is stuff that could have been a story in January but instead we're talking mid June. Give me some of the sex and sizzle and anticipation that comes from the soccer clubs and their big announcements. Give me the Steve Jobs treatment with the teaser trailer in a dark room. Get me to feel something. Anything. 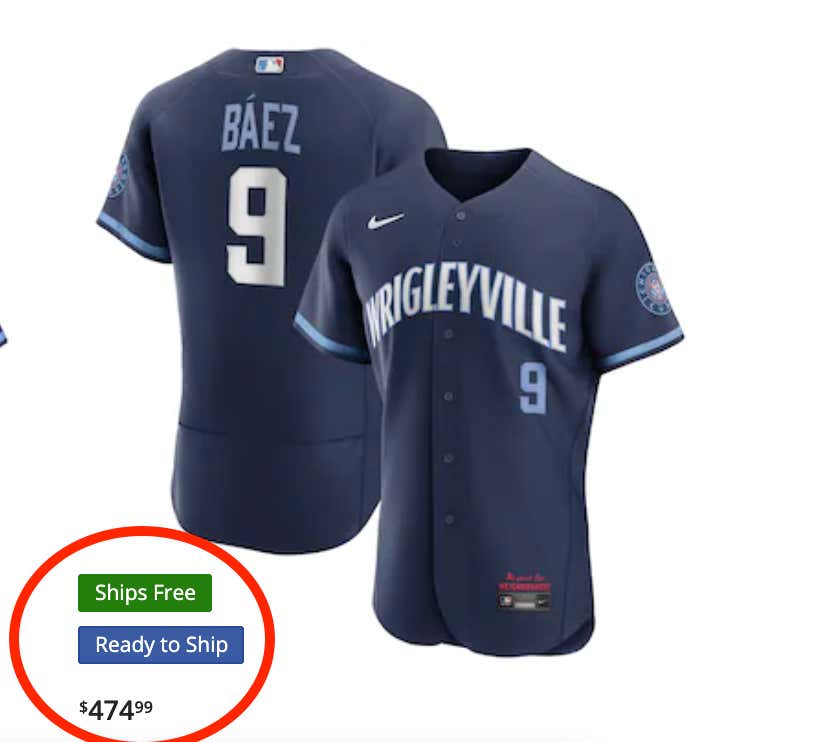 Price pain is not what I had in mind but it makes sense. You have to spend money to make money. Nobody knows that more than Cubs fans.

Final Score: 7.3 uniforms just because they could be worse. The baby blue is fine.