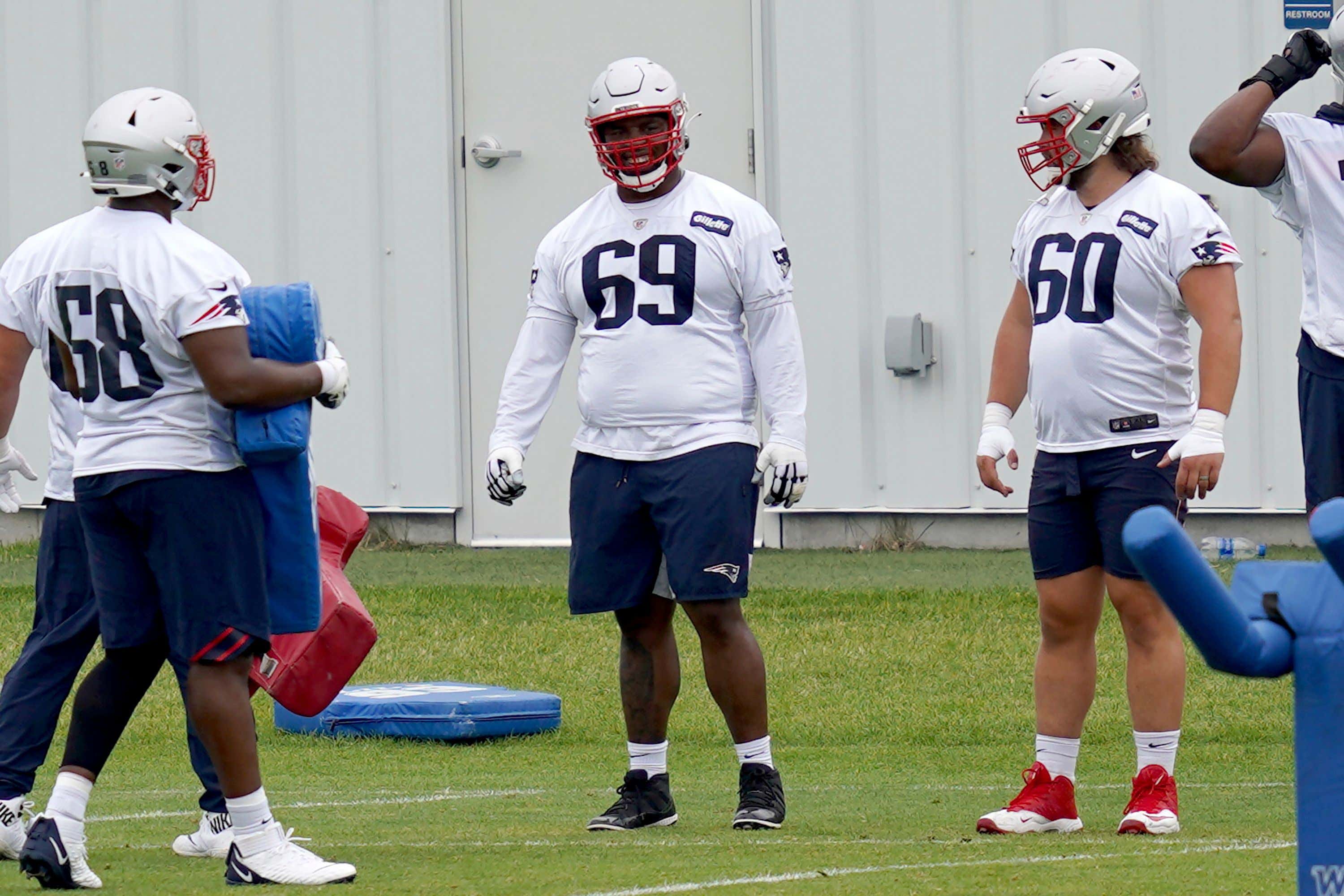 First of all, thanks for coming in. I appreciate your business. The first thing you learn in Intro to Blogging right after they hand out the syllabus is that you don't go fishing for clicks with the words "Offensive Line" as the main subject of your headline. Not when there are other words guaranteed to generate views like, "Wild Video," "Porn Star," Lebron," and "OnlyFans." Writing about an O-line in early June is like opening up a transmission shop between a gun shop, a Victoria's Secret and a liquor store. The other places are way sexier. But you need your transmission.

And since the 2021 Patriots are going to need their metaphorical transmission as much as they ever have, I'm only too happy to address the topic. To run the analogy into the ground, this offseason they've made major upgrades of the exterior and interior, put new tires on the thing, painted and detailed it, and got a tune up. But the overhaul of the power train is the thing that's gone largely overlooked. And I want to rectify the oversight. Because it's been crucial to their prospects this year.

On that note, here's what the mathletes have to say:

Pro Football Focus - [W]ith the 2021 season upon us, it’s time to rank the best offensive lines in the NFL.

While star power has an impact, the best offensive lines have depth across the starting five and often with their backups, so those teams will be ranked higher. …

The Patriots are known for trotting out top offensive lines year after year. Last season was no different, and 2021 should be a similar story.

Left tackle Isaiah Wynn took a step forward in his second season, grading out at 82.6 overall, good for 11th among tackles. He had the fifth-lowest percentage of negatively graded plays in the run game, a stable number for tackles from year to year, so expect more of the same.

[R]ookie sixth-rounder Michael Onwenu … was one of the biggest surprises in the league, as he was excellent whether playing right guard or right tackle, and his 84.3 overall grade was by far the best of any rookie offensive lineman.

New England traded for Trent Brown, which will likely push Onwenu to left guard to replace Joe Thuney. Brown returns to New England after two years with the Raiders. … Brown spent one year in New England in 2018, earning a career-high 73.4 overall grade.

The right guard spot is manned by Shaq Mason, one of the most powerful run blockers in the NFL. He has recorded 80.0-plus grades in the run game in four of his five seasons, though last year saw him post a career-low 60.5 mark in pass protection.

At center, David Andrews returns after notching a 67.7 overall grade last season, tied for 16th among centers. It was Andrews’ lowest grade since his rookie year in 2015, so expect him to bounce back toward the top half of the league. …

The Patriots have solid starters all over the line, possibly forming the best offensive line in the league by the end of the season.

Oh, yeah. Daddy like. Give me some more of that sweet, sweet optimism about the fatties in the trenches. That's the kind of talk that goes down like the first Summer Ale you crack at the beach at a time like this. Especially for an offense that's likely to continue the transition to more of a ground-based attack that began in 2018 when they drafted Wynn and Sony Michel in the 1st round.

Last year, with a run-first quarterback, the Pats graded by PFF as sixth in the league at run blocking and 15th in pass protection. Obviously there's a lot that goes into those rankings. And the ball not coming out as fast as it has in years past for sure didn't help the pass blocking. But still, major improvement was needed, and they've gotten it. Given the fact they lost RT Marcus Cannon (who was traded to his home in Texas) and Joe Thuney - a left guard they thought so highly of they franchised him last year - the fact we're even discussing them as a Top 3 or even No. 1 O-line in the league something close to, if not a miracle, at least an expected and welcome gift. Like finding money in your pocket after getting black out drunk. Or finding out "Cobra Kai" is actually awesome, and not a shitshow money grab.

There are a few factors at work here, but none are bigger than the sudden and shocking emergence of Onwenu. When you take a flyer on an offensive lineman with the 182nd pick of the draft, your loftiest expectation is that he might develop into a starter someday. As a rookie, the most you can hope for is that he makes the roster and becomes a reliable depth guy. Onwenu got inserted into the lineup early thanks to Cannon's opt out and a bunch of injuries. And all he did was play multiple positions, take 927 snaps and establish himself not just as one of the best young lineman in the game, but one of the best tackles in the league, period. And for sure a guy who, with a full year of experience and his first real offseason in the program, can step in and take over for your franchise LG for the next 10 years or so.

Then there's Trent Brown, who was beside himself over the idea of coming back to New England. And when you're large enough to be designated a planetoid, being beside oneself is no small feat. Brown's one year in Foxboro was one of those all time great Patriots acquisitions of the Dynasty era. A draft day trade in which they got Brown from the 49ers in exchange for sliding back from the 95th pick to the 143rd pick. And all he gave them was perhaps the best single season by a left tackle since the days of Bruce Armstrong. So the Raiders made him nothing less than the highest paid offensive lineman in the league. Only to give him back to the Pats this year along with a 7th in exchange for a 5th. And the kick in the head in all of this is the Patriots got a compensatory pick for losing him the first time.

Last, though by no means least, being able to retain David Andrews might sneaky be their biggest re-sign of the year. Despite his grades declining after he missed all of 2019 with blood clots in his lungs, Andrews has been as reliable and as durable as any center they've had, including Ryan Wendell, Dan Koppen and all the way back to Damien Woody.

None of this is established yet, but if I had to guess - and I'm painted myself into that rhetorical corner so let's do it - I'd say it'll be Wynn staying at left tackle with Onwenu next to him, Andrews at center and then Mason and Brown on the right. Giving them power run blocking and the ability to slide deep behind the pocket on the outside, with three mobile guys who can run pulls and get out front in the screen game with any interior unit in the league.

Maybe it's not the sexiest topic in the world right about now. But just talking about it has me aroused. Thanks for your business and please, come again.