I think it's safe to assume that Bruce Cassidy won't be inviting the officiating crew from this series to his birthday party next year. He did a decent job last night in his post-game presser trying to toe that line between ripping the refs to shreds while also giving them enough praise to avoid a fine. I mean he still got slapped with that $25K fine, but it probably could have been worse if he went full Torts here. Instead he praised the Isles management and coaching staff, then followed up by saying they're a bunch of dorks trying to sell a false narrative. Praise the officials, say they fucking suck and miss blatant calls left and right. It was a masterclass on how to calmly attempt to verbally massacre the stripes. Especially with the season on the line coming up in game 6.

So for the most part, Bruce Cassidy did his job here and I can appreciate that. What I don't appreciate, however, was the ricochet shot at the New York Saints--the now-defunct pro box lacrosse team which used to play in the Coliseum. Like if anything from that rant was worth the $25,000 fine, it was disrespecting the 1988 MILL Champion New York Saints. 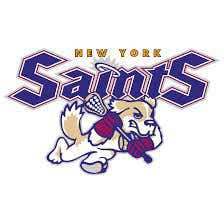 These legends didn't play their goddamn hearts out just for you to use them as a one-liner dad joke up at the podium.

Not a chance. These sons of bitches were greasy. Far from Saints if you ask me.

Granted, the Saints player got his head stomped before trying to tomahawk a dude to death. But still greasy nevertheless.

Now I don't know if Bruce Cassidy actually knows that the New York Saints were a real team that existed. Maybe he just happened to see a Saints banner hanging from the rafters in the Coliseum and he subconsciously brought that name up in the press conference. But all I ask is that he puts a little respect on their next time he brings up the Saints. They've won a championship more recently than the Islanders have, and they haven't even been in operation since 2003. The Saints are the Coli's real team. People forget that.