(video is in the second slide) 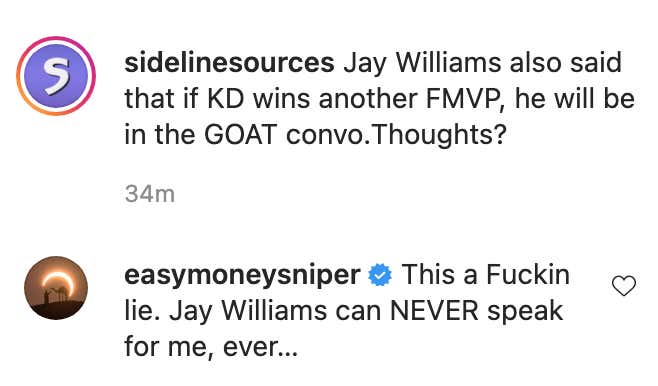 I can't help it, I love Kevin Durant. Despite the fact that he just ripped my heart out in the first round with no remorse. Despite the fact that he somehow refused the opportunity to play with Kelly Olynyk, I can't help it. Part of it is the fact that he's a basketball savant, a player who has come back from an achilles injury that normally should have limited what he could do on the court only the reality is he's better than ever. The best individual scorer I've ever seen with my own eyes. A guy who is revolutionizing the dating game. And someone who is extremely online and ready to call out bullshit whenever he sees it.

Remember when he made Stephen A bend the knee on live television for whatever bullshit he was saying?

What I love about Durant is he never really lies. He doesn't have to. He's Kevin Durant. So I'm going to go ahead and assume this Jay Williams story is 100% bullshit. Honestly, it's not even that good of story. Let's say it was true and KD did say things like that. Is he even wrong? You should never compare KD and Giannis in any way shape or form when it comes to basketball. Jay Williams even tried to say it wasn't their skillset, but how they were built. I'm sorry what? KD is like 180 pounds. Giannis is jacked as fuck. So they are both long? Like every other NBA wing in existence? Stylistically? The two could literally not be more different style wise. That doesn't even make any goddamn sense. Cool story.

I just think about how Durant has always spoke about other players. You never hear that type of shit from him. Just a few years ago he did a Q&A and had this to say about Giannis

“The Greek Freak, I think, is a force. I've never seen anything like him,” Durant said. “His ceiling is probably … he could end up being the best player to ever play if he really wanted to. That's pretty scary to think about. He's by far my most favorite player to watch.”

When will these people learn. You simply cannot go on TV and make up some bullshit story about KD. He has all the time in the world. He's watching. He's online. He's ready to call you out publicly.

Plus, even if he did say this, again, he's not wrong. You can't really compare Giannis and KD. KD has no comp. He's a cheat code. Giannis, as we're seeing, is very easy to figure out. Doesn't mean Giannis isn't a deserving MVP or anything like that, but this is Kevin fucking Durant we're talking about here. That's like saying me and Dave are similar because we both have a login to the same website. You see how insane that is? Who with a working brain would say that? Nobody. Just like nobody told this to Jay Williams.