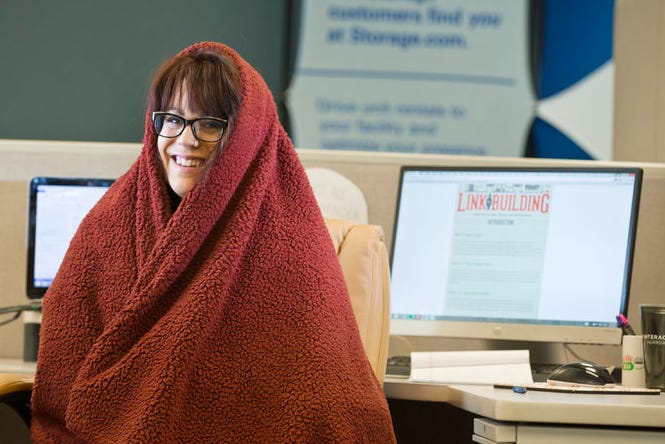 NYT – Summers are hot in Omaha, where heat indexes can top 100 degrees. But Molly Mahannah is prepared. At the office, she bundles up in cardigans or an oversized sweatshirt from her file drawer. Then, she says, “I have a huge blanket at my desk that I’ve got myself wrapped in like a burrito.” Recently, “I was so cold, I was like ‘I’m just going to sit in my car in like 100-degree heat for like five minutes, and bake.’” Ms. Mahannah, 24, who wrote on Twitter that at work she felt like an icy White Walker from “Game of Thrones,” said a female co-worker at her digital marketing agency cloaked herself in sweaters, too. But the men? “They’re in, like, shorts.” Right. It happens every summer: Offices turn on the air-conditioning, and women freeze into Popsicles. Finally, scientists (two men, for the record) are urging an end to the Great Arctic Office Conspiracy. Their study, published Monday in the journal Nature Climate Change, says that most office buildings set temperatures based on a decades-old formula that uses the metabolic rates of men. The study concludes that buildings should “reduce gender-discriminating bias in thermal comfort” because setting temperatures at slightly warmer levels can help combat global warming. “In a lot of buildings, you see energy consumption is a lot higher because the standard is calibrated for men’s body heat production,” said Boris Kingma, a co-author of the study and a biophysicist at Maastricht University Medical Center in the Netherlands. “If women have lower need for cooling it actually means you can save energy, because right now we’re just cooling for this male population,” said Joost van Hoof, a building physicist at Fontys University of Applied Sciences in the Netherlands, who was not involved in the study. “Many men think that women are just nagging,” he said. “But it’s because of their physiology.” Physiology and clothing. The authors also note that the model is not always calibrated accurately for women wearing skirts or sandals. “Many men, they wear suits and ties, and women tend to dress sometimes with cleavage,” said Dr. van Hoof, who wrote a commentary about the study. “The cleavage is closer to the core of the body, so the temperature difference between the air temperature and the body temperature there is higher when it’s cold. I wouldn’t overestimate the effect of cleavage, but it’s there.”

So here we are. Monday, August 3rd, 2015. And the New York Times is now reporting to you that even the air conditioner is discriminatory. Even the A/C is out to get the feminists. Unreal. You know why girls are always cold? Because they are annoying. Thats why. The scientists arent totally wrong here. They’re still correct when they say its physiology, just for the wrong reasons. Physiologically speaking, girls are hardwired to be annoying. They cant help it. They are emotional, irrational beasts who apparently cannot maintain internal homeostasis. They are hot when they should be cold, cold when they should be hot. Hungry at the wrong times. Drunk at the wrong times. They just are always the complete opposite of whatever normal is.

Its about 98 degrees today. Supposedly fucking 165 in Iran. The planet earth is legit melting more and more every second of every day. Few more months and we’ll probably just turn into a giant ball of fire. And Alice from Accounting will still be complaining about it being too cold in the office. Everyone schlepped to work in a heat wave, rode the subway crammed together, walked to the office in the baking sun. Guys showing up with pit stains. The back of their shirt spattered with sweat. Swamp ass galore. Feet already moist in those goddam silky dress socks. They wanna walk into an office thats 68 fucking degrees. Is that too much to ask? Sorry you’re wearing a slutty skirt and a blouse that shows your tits so that you can get that promotion, but for us fully clothed people here, its summer. Its hot. So we put on the air conditioner. I dont wanna hear about metabolisms and carbon dioxide emissions. This is just how society works when its hot outside. You put on a blanket or dress warmer but complaining about the air conditioner in the summer is just illogical, irrational, and fully female.

PS – Plus this just means you bitches arent working hard. Just sitting at your desk shopping and shit your body not even creating any heat. Use your brains. Do some work. You’ll warm up.