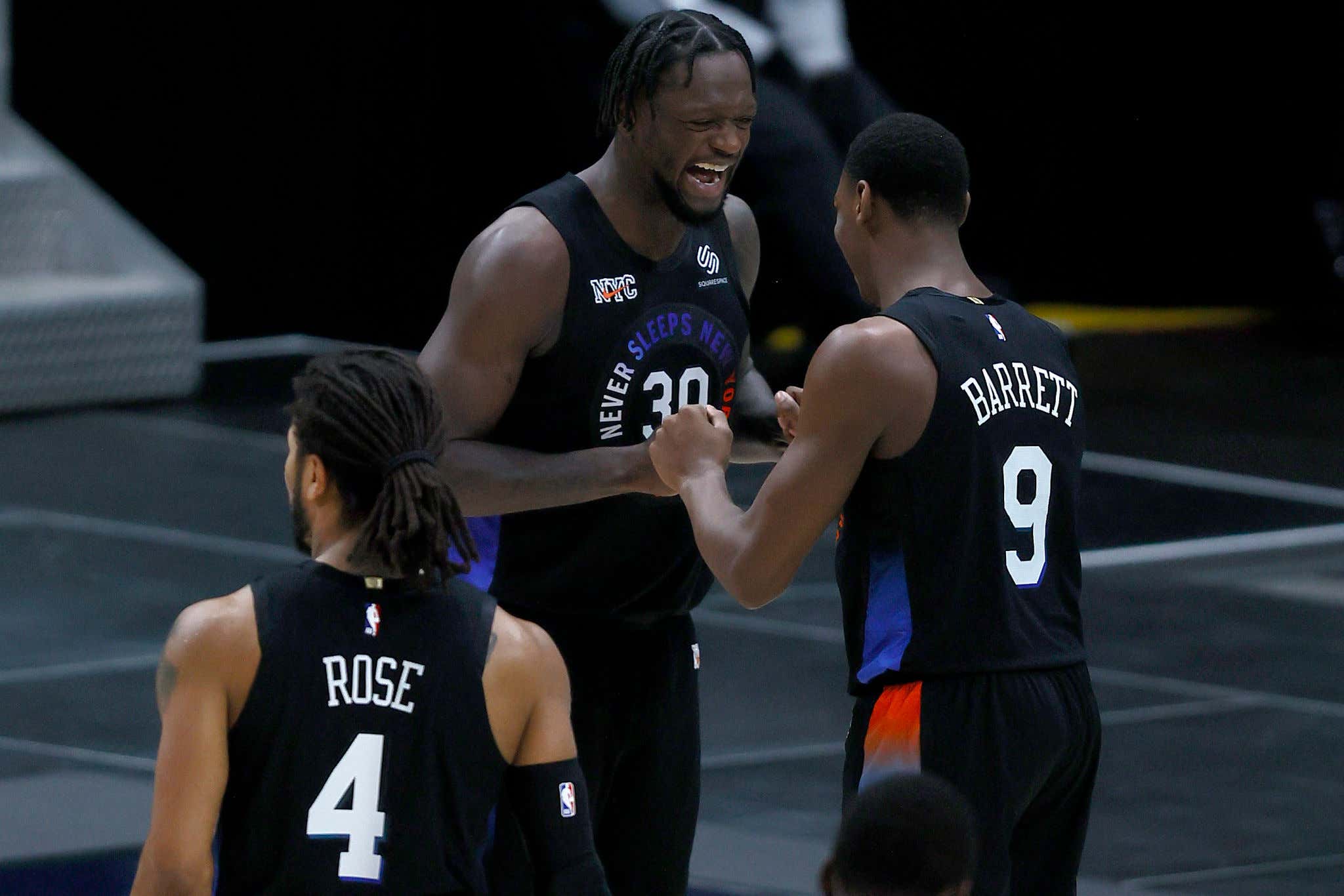 I think most of the disappointment from last night has worn off, partially because last weekend had me extremely ready for the very real chance that the Knicks wouldn't make it to a Game 6 let alone a Game 7. However, I think I'm alright with that. Not because I didn't think this team would go further or because I didn't care if this team went further. But because they at least got as far as they went.

I know that sounds like a loser's mentality, but as someone that has rooted for a bunch losers in those uniforms for almost 20 years straight, I can tell you this isn't a team of losers. Oh wait, that may mean that I am a loser in this scenario. That's probably spot on.

Anyway, I just wanted to thank these Knicks for everything they did this season. They made the Knicks no longer a punchline to the media or other fanbases. They made New Yorkers actually proud to be Knicks fans. They made the franchise a potential destination for free agents again so we can stare at Photoshops of other teams' stars wearing Knicks jerseys again (Yes, I'm already rooting against the Clippers and Blazers so there's a snowball's chance in hell that Kawhi or Dame may come here). They brought back that Madison Square Garden playoff sound. And they even turned the outside of Madison Square Garden into a zoo.

We didn't get a deep playoff run or even a playoff walk or much more than a playoff stumble, even though I don't recognize a playoffs series where the Knicks didn't wear their traditional blue and orange jerseys ONCE. But the race to the 4 seed was fun as hell and watching this team respond after a few different rough patches was awesome to see. This season started during the winter as covid was still running train on this country and just being able to watch a team that played as hard as a typical Thibs team plays got our mind off all the bullshit going on in the world. I wrote this blog back in December and my sentiments from it have only grown after this season.

- Thank you Derrick Rose and Taj Gibson for giving every ounce of energy in your bodies during this series. I honestly thought they were going to walk into the MSG crowd at the end of last night's game and disappear like the ghosts in Field Of Dreams.

I'd love to have Derrick Rose back next season but I also want him to walk at his son's graduation, which may not happen if Thibs gets his claws into him for even one more season.

- I honestly have no clue what to do with Julius Randle after this series. I don't think I have a problem extending him this summer but don't think you can wait until after next season then sign him to the supermax. Actually I know you can't do that unless Steve Mills gets back in charge.I would also like to see Randle in a playoff series where he isn’t the only All Star on the Knicks that the opposing team can focus their entire game plan to stopping.

- I love RJ and Quick the perfect amount in that I'd be thrilled if they are Knicks for life while also acknowledging they don't have the highest ceiling in the NBA and would be alright in moving them for certain superstars down the road. I have also already convinced myself that Playoff Obi is the floor for Obi next season and expect him to develop into a stud because I have to believe it. All three will also be untouchable in my eyes the first time they have a decent game because I love homegrown players.

- I never want to see Elfrid Payton wear the colors blue or orange ever again, even on a random t-shirt or hat.

I know that the Ntilikina Civil War has torn Knicks fans apart for years. But can we all agree to never forget him playing a big role in beating Kristaps Porzingis and the Mavs the first two times they played, which was the legitimate highlight of last season?

- Mitch is another player I love but at this point, I feel like there is just as good a chance he becomes a defensive stopper on another team as him staying here long term, which makes me sad like Frank. But sooner or later you have to start cashing in the potential for consistent production.

- Even though they all had their moments during the season, I'm pretty indifferent on bringing back Reggie Bullock or Alec Burks next season unless the price is right (I like Burks more than Bullock). I'd gladly welcome Nerlens back but only as a backup because his injury issues are almost as pronounced as Mitch's.

- I just remembered the Knicks have Luca Vildoza on the roster and got legitimately stoked.

- Thibs didn't have a great series and this Knicks team felt like a bunch of Thibs teams where they beat teams in the regular season because they bring effort every night, which then gets turned on its head during the playoffs when your opponent is dialed in every game. But I still love having Thibs as the HC of NYK.

- I think I have to stop going on Electric Chairs with KFC because I feel like it always ends with these type of moments.

- For more Knicks talk, Reags did a good job breaking down some of the players that the team can/should go after.

Now it's time for Leon Rose to go to work in the front office and World Wide Wes to go to work in the shadows to make this team evolve to the next level via trades and tampering. Yes this move that landed the Knicks Immanuel Quickley still gives me funny feelings in my belly.

In Leon We Trust!