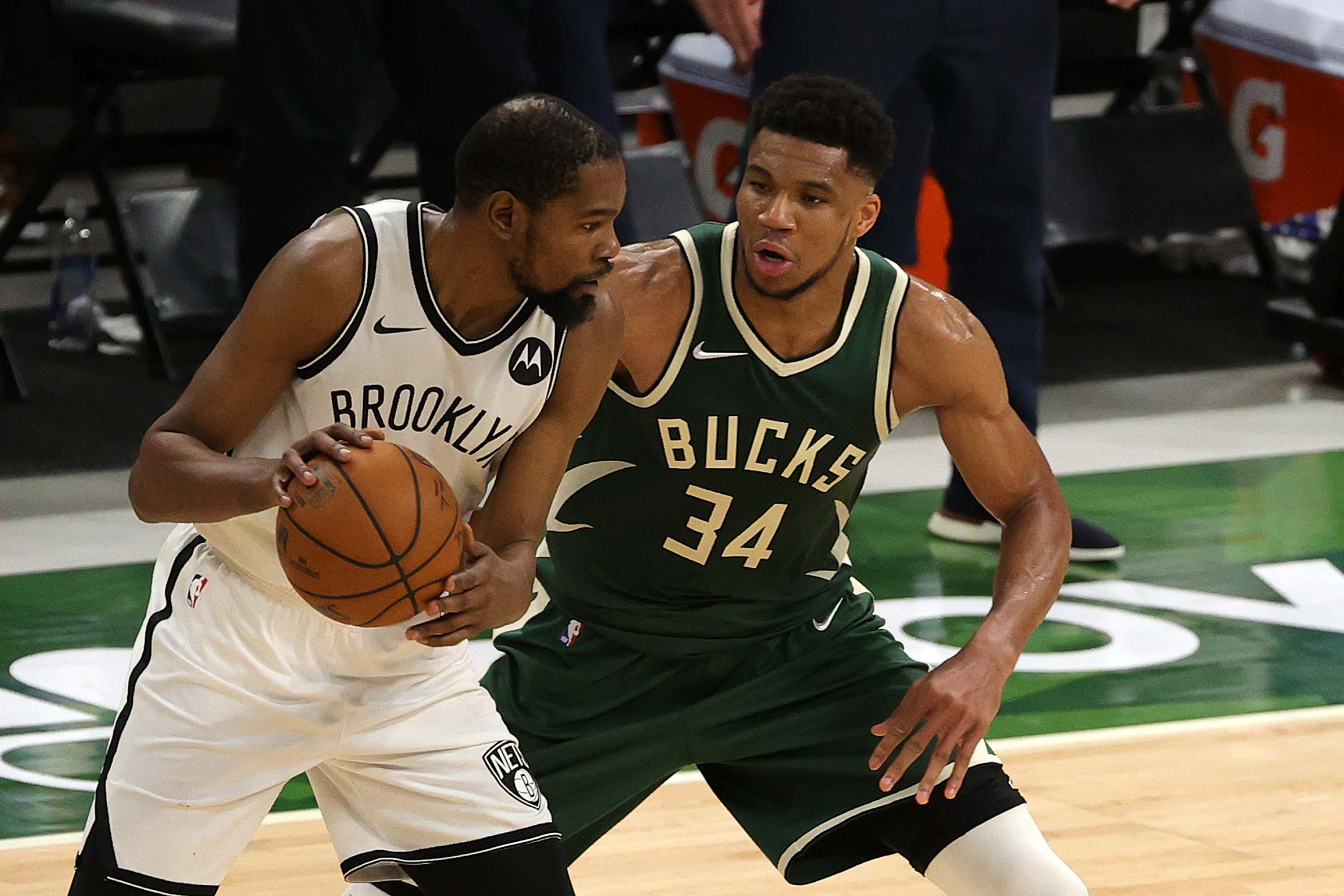 With three of the four series out West still TBD (DEN and PHX can advance tonight), it's still a little early to be talking about the second round. That is not the case out East with no matchup going past 5 games in the first round. What we do have are two very intriguing matchups which should make for some awesome postseason basketball. All four teams remaining have looked fairly dominant thus far, but the big question is how much of that is real and how much of that is because they played teams who stink in the first round. Outside of the Hawks (who were tied record wise w/ NYK), it was chalk through the first round. You could argue we're getting the four best teams in the conference this season, which is pretty great. Three of which have legit title expectations. With second round games starting this weekend, let's take some time to dive into each series and what you should expect.

Looking at this matchup, it basically all starts in one place. What's the deal with Joel Embiid? If you missed it, the Sixers have a bit of a pickle on their hands

I'll say this. In the one game the Sixers lost to the Hawks this year, it was nowhere close to their normal lineup. Embiid played, but you may remember this was the game that PHI could only use 9 players. This was at the time of the year where they had just been forced to play with 7. So it's not as simple as "the Hawks beat the Sixers w/ Embiid". In their second meeting, the Hawks got demolished. Only thing is Trae Young, Bogdanovic, De'Andre Hunter, and Kevin Hueter didn't play. That feels important. In the third meeting, the Sixers again smashed this Hawks team. They were at full strength, the Hawks once again did not have Young, Bogdanovic, Hunter or Huerter.

So really, we have no idea how these teams match up. Which brings us to the Embiid situation. The Hawks just had their way with a top 5 NBA defense. There was no issue whatsoever getting whatever they wanted on the offensive end. The Sixers present a different set of challenges though. Their perimeter defense should be much better than the Knicks. Simmons, Thybulle, and Green are more than capable. But there is no denying that not having Embiid in the lineup impacts how this team looks on that end. When you're the most dominant player the league has, it's no surprise they look drastically different when he's on and off the floor.

We saw a similar trend in the regular season. Don't get it twisted, this Hawks team is not the Wizards, on either end. So what do the Sixers do? Risk a potential serious injury to Embiid that could fuck everything up? I just don't know the right answer. He's so important to what they do on both ends of the floor, this series has a whole different dynamic if he can't go. If he does play, the Hawks have big time matchup issues outside of Clint Capela. John Collin is too small, Gallo isn't stopping shit, and the only other big they have is a rookie. Embiid is going to eat that for lunch. The Sixers in theory shouldn't have too many issues.

But without Embiid, that all changes. We just saw what the Hawks did to an elite defense that didn't really have a rim protector. If this series means more Dwight Howard, well you feel great about that as a Hawks fan. That's a much better matchup for Capela since Dwight is a more traditional big.

What makes this series so intriguing isn't just the Embiid part though. It's a great contrast in styles. The Hawks want to give the ball to Trae Young, force the defense to collapse and then kill you with their shooters. During the regular season, the Sixers were 8th in opponent 3PM and 9th in opponent 3P%. They can now throw elite on ball defenders on Trae to try and limit him, something the Knicks did not have. Even if forced to switch, they can make sure to not drop off defensively. It's also a difference in pace. The Sixers played with the fastest pace of any playoff team so far. The Hawks were 11th. The Sixers were 2nd in the NBA in forcing turnovers (15.6), the only problem is the Hawks don't really turn it over (13.2, 9th in NBA).

We know that Trae Young has completely embraced being the villain. It's awesome to watch. Mostly because he's been legitimately unstoppable. The return of Bogdan Bogdanovic has changed everything for this Hawks offense. If the Sixers are going to be successful, it's going to come down to what type of defense are they going to get from Tobias Harris and Seth Curry. This Hawks team is mostly healthy and pretty deep. Lou Williams can go off, Gallo has good size and can shoot, Huerter can shoot. It's not a case where the Sixers only really had to worry about two guys, like they did with the Wizards.

The Sixers should still be favored, even without Embiid. Their body of work during the year has proven that. But it would not shock me if they try and steal a couple games early without Embiid. That's the risk. If they can't beat a 5 seed being fully healthy outside of Embiid, well then they probably aren't beating the winner of MIL/BKN anyway.

It's hard to really pay any attention to head to head matchups when talking about the Nets. They never played their guys. In the two MIL wins that came towards the end of the season, James Harden didn't play. He feels kind of important to what the Nets do. It's a little sad that this matchup is coming in the second round, you could argue that if the Nets decided to give a shit about seeding during the year that this is series is most likely coming in the ECF. Oh well! I kind of like it. We're going to have a situation where two legit title contenders and perhaps even the overall favorite could not even make the conference finals. That's awesome.

The other reality when talking about these two teams is that we don't reaaaaalllly know what they are. Playing both the Celtics and Heat doesn't really tell you all that much. Those teams were pathetic all year. There's a whole different problem trying to defend an offense like Nets compared to the Heat's offense, and I'm not even sure the caliber of defense that Boston played is anywhere CLOSE to what the Bucks do. Both sides are dealing with somewhat important injuries, the Nets with Jeff Green and the Bucks with Donte DiVincenzo. Both teams can score like crazy. Everything points to this being an incredible series and really a toss up.

The Bucks do appear to be on a revenge tour of sorts. First up was the Heat, next up is not making a Finals. On the Nets side, it's pretty obvious that they are a problem. A big problem. Sorry to tell you, but the Big 3 experiment is working. While their defense might still be their downfall, they also score with ease in a way where it may not even matter. One thing I took away from the BOS/BKN series was the fact that whenever the Nets got up by like 6, it felt like 50. There just aren't a whole lot of possessions where they come up empty. The question is now whether that's real, or just because the Celtics defense was so pathetic.

Matchup wise, it's hard to do better in terms of an on ball defender than Jrue Holiday. That will be important for guarding Kyrie/Harden. Giannis has the length to in theory to give Durant fits, but Durant also looks like a guy that might never miss again. The Bucks spent all year working out the kinks on their new switching defense exactly for this postseason run. As we know, the Nets LOVE to try and exploit mismatches via a switch. Tristan Thompson is still having nightmares of James Harden.

You could make the case that the winner of this series could very well go on to win the whole thing. That's what's at stake in this series. We all know what happened the last time Kyrie Irving played the Bucks in a playoff series. I suggest any Nets fan that doesn't know to not even look it up. I'm not sure who comes out on top, all I know is I hope it goes 7.

For the most part, these NBA playoffs have been awesome. Now that we're trimming the fat and getting to the teams that are actual contenders, chances are things get even better. Round 2 out East is going to be a bloodbath. I can't wait.