I can't believe you thought the Orioles would lose 15 games in a row. 14? Sure, they would definitely lose 14 games in a row. But 15? There was no chance they were losing 15 straight. Was never even a thought that crossed my mind. 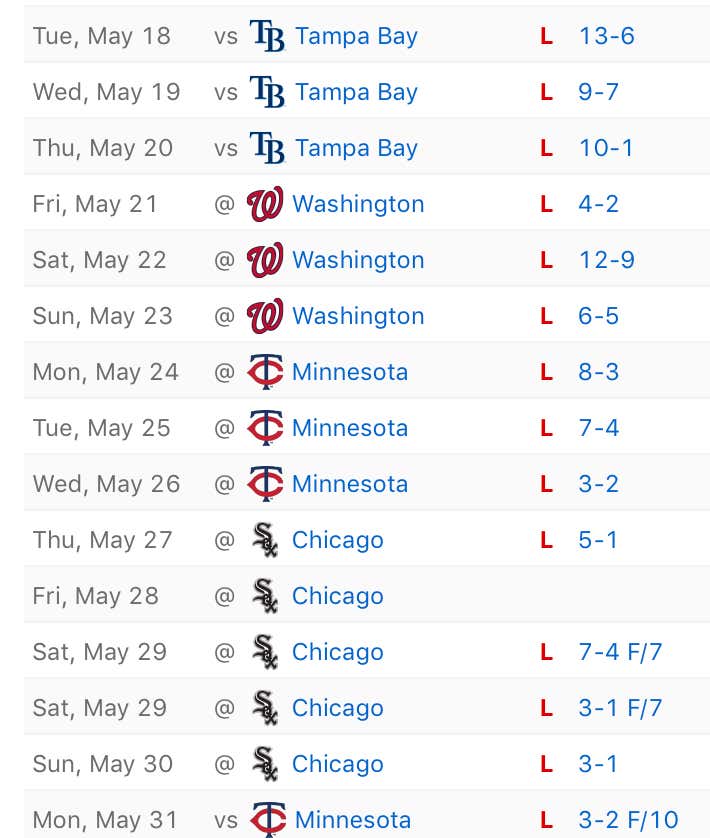 14 losses in a row even looks shitty, it wasn't fun. Seemed like it was much longer than 2 weeks but thank god that horrible month of May is over. 16 days without a win felt like an eternity. The Orioles were 15-16 after John Means no-hitter in Seattle on May 5th. They had a decent amount of momentum behind them starting a homestead, and proceeded to get used and abused. They proceeded to go 2-21 in their next 23 games following the no-hitter and went 5-23 in May all together. You name it they lost a game in that way. Close game? Check. Blowout? Check. Home game? Yup. Away Game. Yup. Blown lead? You betcha. They had also lost 16 straight games to the Twins, they smashed 2 terrible losing streaks in one day. What a team.

I knew they couldn't continue losing at this pace, I was so sure of it I bet my life on it. If the Orioles lost 20 games in a row I was going to cannonball into the disgusting Inner Harbor in downtown Baltimore. Would have tested positive for everything known to man if I made the plunge. I would have done it and everything, no backing down, but I knew it wouldn't have even gotten close. Never was worried about this. I knew my guys wouldn't let me do that. I also think legally I wouldn't have been allowed but I would have risked it because I'm a man of integrity. Catches like this from Cedric Mullins is another reason the streak ended. Hell of a catch.

1-0 in June baby, this is where this thing turns around. I'm just kidding, we're focused on the draft now and continuing to watch John Means and Trey Mancini abuse the rest of baseball. This team may be 16.5 back at the beginning of June but they damn sure weren't going to lose 15 straight.