I said it in the tweet above, but I will reiterate it here, you could really, really tell he felt every word he said in his plumbs and so much so that he knew he was going to get fined for said words and piss off his wife Michelle. Just look at this face; you think this is the face of a dude who wants to piss off his wife? 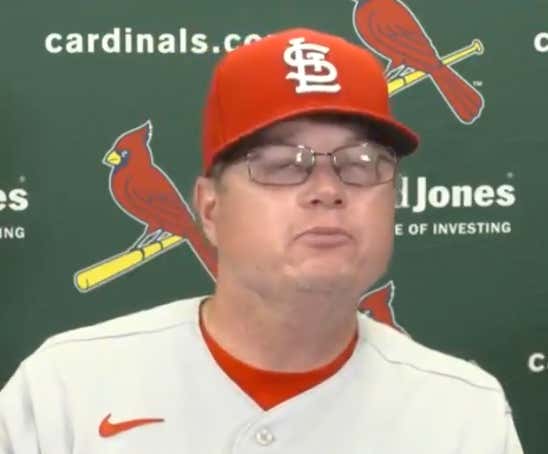 Absolutely not. That's the face of a dude who walks around the house in whitey tighties and has an excellent collection of tools in his garage. That's how you know he was completely convicted in his words.

But he's right. Either you enforce the rules that don't allow pitchers using foreign substances to doctor balls, or you don't. And Joe West, just like I said yesterday, had to go out and make a scene BEFORE A PITCH WAS THROWN yesterday. Here's a still shot of the hat in question: 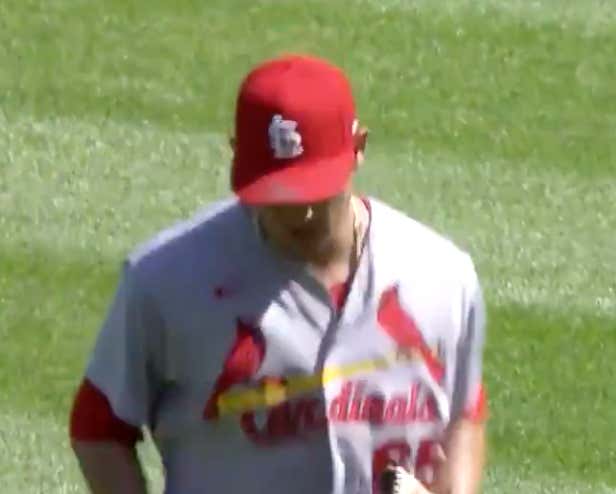 Yep, looks fishy to me. I don't buy that it's just dirt and sun screen. Maybe it is, maybe it isn't. I really don't care, because it also looks like the hat of just about every pitcher in the league these days. As Shildt said in the presser, it's baseball's "dirty little secret". Trevor Bauer has called out baseball for using pine tar or other sticky substances to increase spin rate for years now before finally saying, "fuck it, if nobody's gonna say shit about this, I'll do it too and get PAID because of it."

So why did West choose to yesterday of all days to put his foot down? I don't know. Probably because it's the Joe Show. Has been for parts of 6 (!!!) decades now, and it's to be expected. I don't think West wasn't looking out for Gallegos. I think he was trying to make the game about himself. I take exception to that, as people are there to see the players, not the umpires, so get outta my face with that excuse. I don't know of any other instances where West made the pitcher change his hat before throwing a single pitch. All fans want out of their umpires is consistency, so unless West starts enforcing rules for every pitcher that wears a gross ass hat, he's just making himself look like an idiot.

On top of that, I personally don't give a shit about pine tar usage for pitchers. Not one bit. If every pitcher in the league is using it, nobody is using it. It just is what it is. Nobody says shit about it but I also wouldn't be shocked if Shildt's rant opens Pandora's box and the league actually starts to crack down.

This is the part of the blog where I put my tin foil hat on; what if the league instructed West himself to call out suspicious substances on a pitcher's hat/glove/belt/etc. so they can find a scape goat and start to actually crack down on it now that offensive production across the league has plummeted? I wouldn't be shocked at all. Definitely a harebrained theory, but I truly think it's possible.

It's always something with this league. ALWAYS. Last year they got rid of the juiced baseballs. Now fans are pissed because the batting average across the league is down BIG TIME, home runs are down BIG TIME and strike outs are up BIG TIME with respect to the previous few years. That, and games take about 3 years to finish 9 innings.

So here's an idea - enforce the already in place rules that ban the usage of foreign substances on the baseball and don't pick and choose when to do so. Use the same ball you've always used prior to this year. And figure out a fucking way to make pitchers work quicker. Taking 30 seconds between pitches just lulls people to sleep. Nobody works quick like Mark Buerhle anymore, not even close. Try to figure out a way to keep as many games under 3 hours as possible.

I think these are reasonable requests, but I'm sure baseball will fuck it up because that's what baseball does. Tinkers, meddles, and fucks things up.