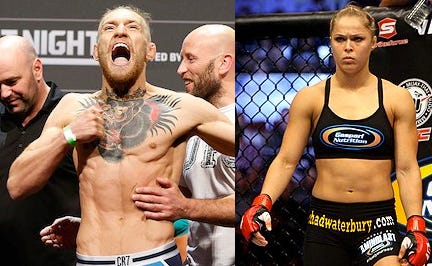 Uproxx - Well that didn’t take long. Moments after Ronda Rousey’s annihilation of Bethe Correia, there was talk of a mega UFC card in December. The wheels are already in motion, according to UFC president Dana White. The card would likely include Jose Aldo and Conor McGregor, two of the sport’s biggest stars. Aldo, of course, had to back out of UFC 189 with McGregor after suffering a serious rib injury. He has since recovered. As for Rousey’s opponent, well, who knows. There’s talk of a third fight with her “rival” Miesha Tate. Sure, it’s not a great matchup and Rousey will be heavily favored. But there’s not much else for Rousey right now, especially in her weight class. And Miesha Tate is arguably the second most popular female fighter in the world. That alone will get people talking. As Fansided notes, Tate is the only fighter to take Ronda Rousey beyond five minutes, losing by armbar submission in the third round of UFC 168. She also lost to Rousey in 2012 by armbar as a fighter for Strikeforce. Needless to say she’s gonna need a new strategy, one that involves staying out of Roousey’s wheelhouse.

In case you were in a coma over the weekend, Ronda Rousey won her latest fight in just 34 seconds, cementing herself as the most bad ass chick on the planet. So it’s no surprise Dana White wants to milk her celebrity for all it’s worth, by putting her in a fight in front of 100,000 people at Jerry World. His other mega-star, Conor McGregor would be on the card too, making it the UFC PPV that even the most casual of sport’s fan would want to watch, a la the Floyd Mayweather fight. Rousey is not only the biggest UFC star, but a bonafide mainstream celebrity. Conor has crept into the mainstream and is huge over in Europe. This would without a doubt be the biggest UFC card of all time. Fuck, throw CM Punk on there too and smash every PPV record ever. He has to be ready to fight the Green Power Ranger by December.

The one thing I think they have to do differently is figure out the time problem. Rousey’s fight started after 1am East Coast time. Can’t have your biggest star coming out at 1am. You’re trying to build the sport and popularity, need to have as many eyeballs on her as possible. She should be coming out at 10, 11 at the latest. Just seemed like a pretty big mistake to me. Old people who wanted to watch it probably saved their money because they don’t want to stay up that late.