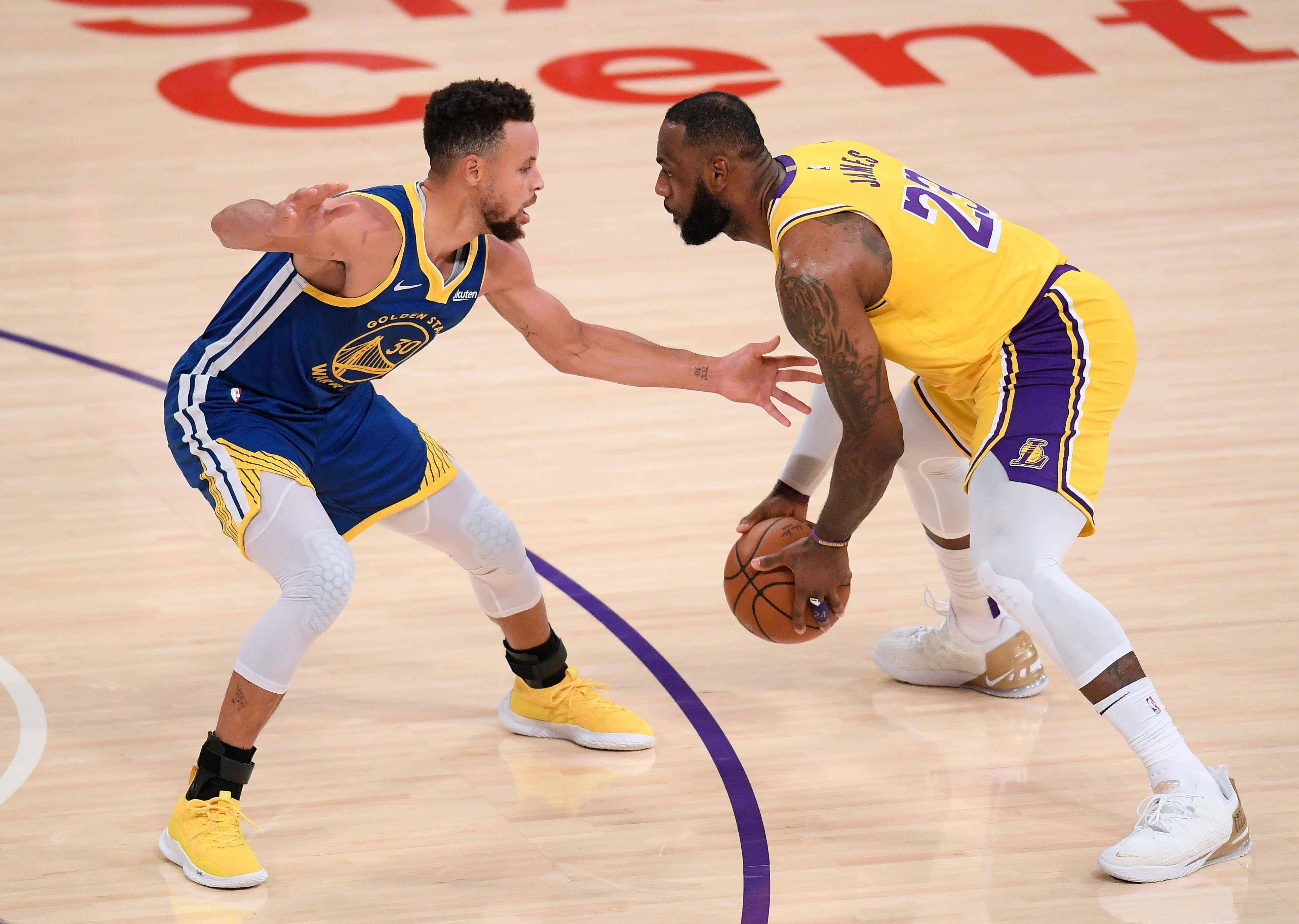 Last night was fun and all, especially for yours truly, but tonight is the matchup I think we've all been waiting for. That's right, we get Grizzlies/Spurs tonight. Oh, and Steph/LeBron which I guess is going to be pretty awesome if you're into the whole best players on the planet going against each other thing. Let's get you ready for the action with everything you could possibly need to know about both matchups

LeBron can cry all he wants about the play in format, but there's no changing the reality that he now has to play in it. I think most of us who have watched both of these teams this year are banking on a few things. Warriors fans are just hoping Steph goes nuclear and Andrew Wiggins shows a pulse. That's their only hope. Lakers fans first and foremost are praying for health, and when you have a 100% LeBron/AD you're always going to be the favorite. When they are both on the floor, it changes absolutely everything for the Lakers. That's not exactly rocket science.

But there are other reasons to be confident as a Lakers fan outside of those two. For starters, did you know they had the NBA's best defense this season? That's with LeBron/AD missing a lotttt of time too. That just goes to show you that while they may need to rely on LeBron/AD offensively, as a team this Lakers group can still defend at a high level from other positions. It's going to be crucial for guys like Alex Caruso to be effective as an on ball defender against Steph. Wesley Matthews and KCP are going to have to step it up as well. You're not going to beat the Warriors trying to out shoot them if you're the Lakers. I mean this is the 24th ranked offense for a reason. Even before AD first got hurt they were only 12th in the league in offense.

As a team, the Lakers are 25th in 3PM and 21st in 3P%. It's simply not a huge part of their success. You're not going to be able to match Steph/GS from the three point line. So what should they do? Well the Lakers do have a secret weapon that would pretty much destroy everything the Warriors want to do. Play AD at the 5. He doesn't want to do it, but this is the game you tell him to stop being a giant baby. The Warriors are going to go small with Draymond at the 5. AD has played only 10% of his minutes at the 5 this year and that's easily the most obvious adjustment for the Lakers to make. You want to take Draymond out of this game, you make him guard AD. Run P&R with him and LeBron and you're going to get a mismatch every single time.

This game is going to be a contrast in styles because the Warriors want to run you right off the floor. They are 3rd in pace compared to the Lakers 21st, and that makes sense. The Lakers want to slow things down and punish you with their size, and make you prove that you can stop LeBron without fouling in the half court (you can't). The Warriors want to get you out in transition and find open looks for their shooters. The Warriors are 5th in the league in fast break points, but because they are always so small they are 27th in opponents 2nd chance points. That's where the Lakers are going to have a clear advantage. Even if they don't shoot well, their size is going to be an issue.

At the end of the day though, the Warriors have Steph Curry. A player who nobody has been able to slow down for some time now. A player putting up better numbers than his unanimous MVP season. One of the most terrifying players to go against in a singular game in the entire league. You blink and he's already gone on a personal 9-0 run with 3 backbreaking 40 footers. If they can somehow continue to be legit on the defensive end like they have since the trade deadline, they have a shot. That's what Steph Curry gives you. He at least gives you a punchers chance because he can be the best player on the floor and carry you over the finish line.

It's a fun predicament for the league too. Do they help LeBron and the Lakers, the defending champs and huge market? Or do they help Steph to secure him in the playoffs and then just get the Lakers in as the 8 seed. It's going to be fascinating to find out.

I don't want the Spurs or any Spurs fan to take this personally, but I need the Grizzlies to win this game. I've had enough of SA for a while when it comes to the postseason. Give me the excitement of Ja Morant and JJJ instead. I'd much rather see them face either GS or LAL. We know what the Spurs are, we know they refuse to die and aren't flashy, and frankly I'm looking for flash at this point of the season.

What's crazy that even a team like MEM which isn't even a good shooting team (11 3PM), might actually win the basketball math battle because at least they take them. The Spurs are dead last in both 3PA and 3PM this year. They'd rather run P&R and just kill you with the midrange game. They thrive off scoring off screens, ranking in the 93rd percentile. As you expect, the Spurs operate like a well oiled machine. This style isn't new, but the lack of threes can be a problem when you're talking about a singular game. You combine that with a below average defense, and that should have you excited as a Grizzlies fan. That's a team that has guys who can get hot like Dillon Brooks or Desmond Bane. They play faster, shoot more threes, and actually have a top 10 defense.

The Grizzlies are used to this play in tournament, and I'm interested to see if their collapse last year will have them ready this time around. The Spurs are loaded with vets who will not be intimidated by the moment. The Grizzlies are still young as shit, so really that's the only thing I would say works in the Spurs favor. As we just saw yesterday with IND/CHA, it's not always about who has the most talent in these play in games. The Pacers were more experienced and stuck to their gameplan. The Hornets….did not. Despite having more talent available they got waxed right from the jump because they were playing a team that didn't panic. That has the potential to happen in this game.

As long as the Grizzlies don't fall into an isolation trap (just 41% on iso plays), they should be OK. Their goal should be to force turnovers (3rd in points off TOs), get out and run and make the Spurs play faster than they want. You let them get their offense set, Pop will just scheme you to death. The Grizzlies have the foundation to be good defensively and the talent to make the Spurs turn it over. The test will be if the Grizzlies can actually make them pay, because SA is 2nd in the league in limiting opponents points off turnovers. You can see how contrasting these two teams are in terms of their style and how they are actually successful.

All I'm hoping for is that with this being the first game before LAL/GS, that it's at least competitive unlike yesterday. I'm someone who wants to see Ja Morant on the bigger stage, and I think a battle with him vs LeBron or Curry would fit the bill.

Day 1 of the Play-In tournament did not disappoint (unless you're a Hornets fan), so here's to hoping we get the same thing tonight.