A lone fighter is welcomed into and trained by an ancient Japanese ninja clan called the Arashikage, but finds his loyalties being tested when secrets from his past are revealed, as he eventually goes on the path to become the hero known as "Snake Eyes". 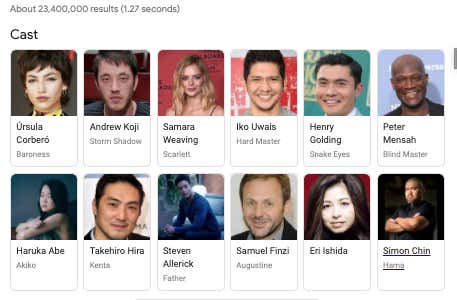 ICYMI, this movie is a reboot of the Channing Tatum G.I. Joe movies that you all know and were probably mildly disappointed with. Remember when they killed Tatum off 5 minutes into the sequel? Fuck you for that, Paramount.

This looks like they are going to try and fix some of the mistakes of the first by doing a small origin story to start off instead of going straight into the team dynamic. Personally, I don't know a ton about the G.I. Joe lore other then the fact that Snake Eyes always looked cool. That said, this trailer made me want to know a lot more because it looks cool as hell. Part origin, part setup, and all-action.

One thing that should excite you about this movie is the cast. Henry Golding is a great face, and by all accounts he has trained hard for this role. What is more exciting, though, is Andrew Koji and Iko Uwais. The former is unbelievably good in Warrior (which you can watch on HBO Max). He's super physical, huge, and a great strong silent type of actor. He's trained and competed in taekwondo, and knows Shaolin kung fu. Also, he is a fantastic scream guy.

Iko Uwais is trained in Silat, an Indonesian martial art, and is the star of 2 of the best action movies of the past decade in 'The Raid' and 'The Raid 2'. He's not as physically imposing as Koji, but it is incredible watching him perform.