Chicago Tribune - As the U.S. moves closer to reopening seemingly every day, it looks like a big step forward will come in mid-summer, when the Lollapalooza Festival will return to Chicago with a four-day event at its usual place and date range — Grant Park, July 29-August 1 — sources tell Variety. The city of Chicago gave the event the greenlight at near-to or -full-capacity, insiders report, and an official announcement, likely with headliners, is expected to come next week.

Reps for festival organizers C3 Presents declined Variety’s request for comment, although one told the Chicago Tribune late last month, “We are excited about the progress in Chicago as the city continues to reopen. We are in close contact with city and public health officials as we continue to plan for the festival and remain optimistic about Lollapalooza 2021 in Grant Park.” The festival’s website still has the 2020 dates and lineup posted.

The Tribune asked Mayor Lori Lightfoot’s office Thursday evening to respond to the Variety report: “The Mayor’s Office and CDPH (Chicago Department of Public Health) have been in conversation with several large event organizers, including the team at Lollapalooza, on how to bring these experiences back to Chicago in safe way. We are taking these events case by case and determining how we can ensure the safety of our patrons."

Talk about opening the floodgates.

We're like the kid in highschool who never drank who all of a sudden finds themself on a college campus with no parents, a flush checking account, a healthy dose of peer pressure, and LOTS of pent-up horniness.

It's gonna be pedal to the fucking floor for a long while until the wheels fall off.

Long island iced teas, jager and rumpleminz shots, all the drugs, and going home with anything that walks.

That's going to be this summer in Chicago, (and lots of other places that have been locked down for more than a year now).

If you had told me 3 months ago when we were still subject to a ridiculous 20% occupancy in restaurants that our supreme overlords would be allowing us to attend a shitshow musical festival like Lollapalooza in July I would have laughed through my mask, that the CDC first told me I didn't need, then said I did, then said I needed two of, now says I don't again, at you. Hard.

But I'm not one to look a gift horse in the mouth. I'm guessing that, like sports, where Covid respects the game, covid also respects live music now so we're good to go.

And go we shall, with Lollapalooza unofficially officially being confirmed for the last weekend in July in Grant Park.

(Fun fact- did you know Ulysses Grant's statue is located in the heart of Lincoln Park, whereas Abraham Lincoln's statue is located in the heart of Grant Park? There's an explanation that there was a mistaken switch that was never corrected, however the city of Chicago's website explains it as .. "It's a Chicago curiosity, but can easily be explained by knowing the history of Chicago's prominent lakefront parks. Lincoln Park was Chicago's first park, well established at the time of Grant's death. The mud-covered remains of the Great Chicago Fire would be developed as a series of formal gardens after the turn of the century and named for Grant, another honor for this great Civil War hero." I call bullshit, they fucked up)

If I know Michael Rapino like I think I do (we met once a long time ago before Live Nation took over the world) he and C3 have some MONSTER headliners lined up for the two main stages and Perry's on all four nights. We deserve it. Chicago and Lolla used to have a monopoly on the summer festival talent back in the day. First pick of the talent pool. Now there's a new festival popping up every weekend in every city in the country and Lolla has gotten the scraps. It's bullshit and needs a correction.

Let's get Kanye, Rage (they're touring), Foo Fighters, Deadmaus (both playing Bonaroo), Tiesto (touring), Post Malone and Travis Scott (playing Rolling Loud), The Killers, and an Oasis reunion show just for the hell of it. Again, we earned it.

Guns n Roses can't play because there's a radius clause since they're playing Wrigley Field. Speaking of which, let's talk about the STACKED lineup Wrigley has this summer. 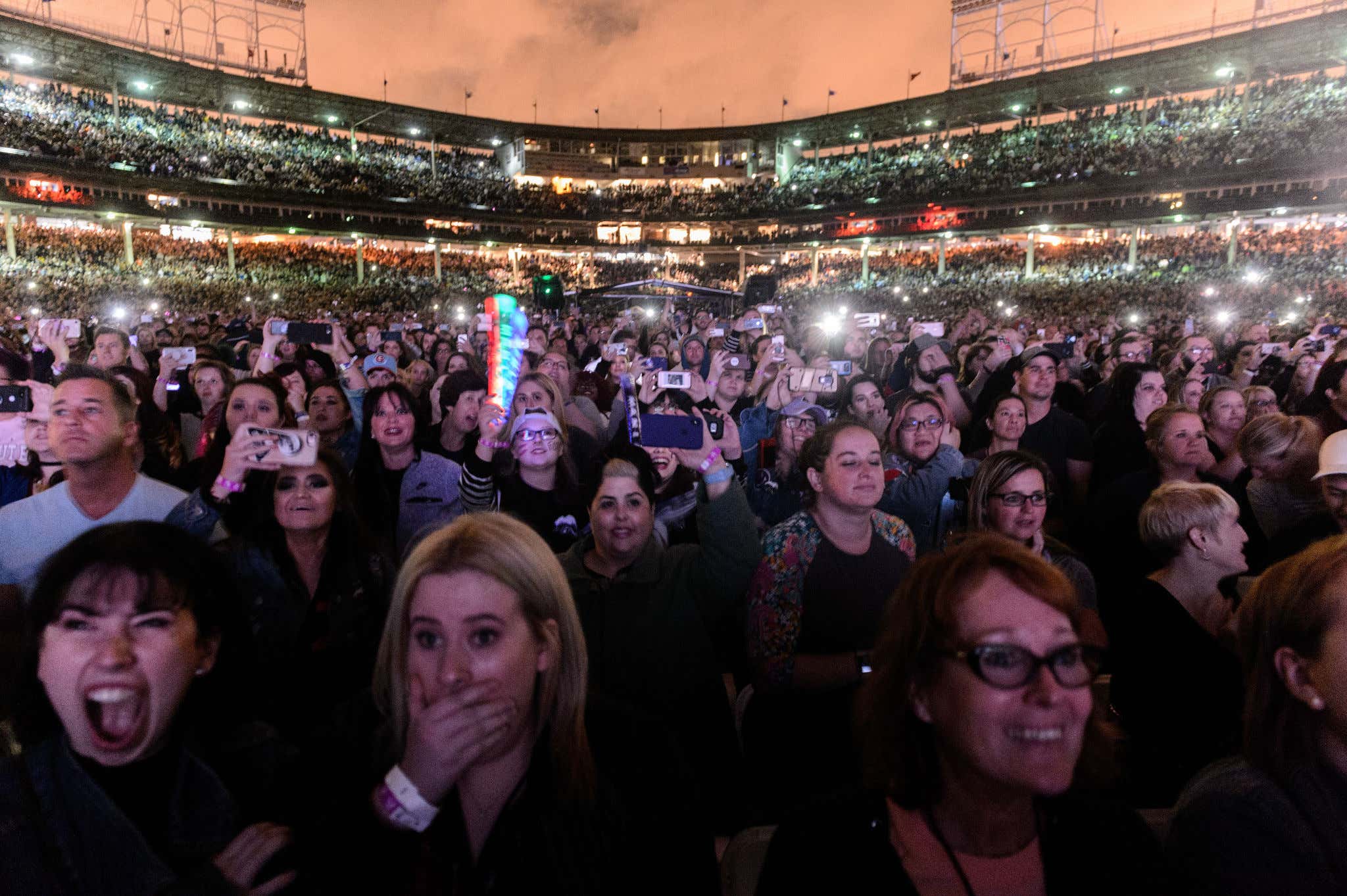 TAKE ALL MY MONEY!

I don't know what it is about baseball parks, but when they moonlight as music venues it's just magic. Or maybe I'm just an idiot. But every show I've seen at a ballpark trumps the shit out football stadiums and arenas.

(Sidebar - I went to both Guns shows at Soldier back in 2016 and they were two of the best concerts I've ever been to. Legendary nights)

Wrigley lost Zac Brown Band Shows that were scheduled last year, and couldn't be rebooked this year because of scheduling conflicts, so that sucks, but these shows are going to be lights out.

Believe it or not but we're also getting these back this year!

Old Town Art Fair is obviously the GOAT so that is such insanely good news I could almost cry.

(Sidebar - do people remember when Lincoln Park was in its heyday and Lincoln Fest was the runaway champ. No joke might have been the best weekend of the entire summer. Then all of a sudden it fell off and have no clue why.)

Windy City Smokeout two years ago when they moved it to United Center parking lot was unreal. Ed and Tommy just took the entire thing to another level and dragged their nuts across pretty much any other country fest on the map. BBQ + Live Country superstars over three days of incredible Chicago summer weather is unbeatable.

(Another sidebar- don't sleep on Market Days. A little less wild than Pride Weekend because there isn't the insane parade, but still a fuckin blast. The gays know how to party and Boys Town goes off)

One of the best festivals in the entire country, in fact, I think it's second only to ACL in Austin, Milwaukee's Summer Fest is also a full go this summer.

And their lineup is bonkers.

I don't know how anybody in Wisconsin gets anything accomplished that stretch as the fest runs three weekends and is an all out rager for nine days. (Sept. 2nd-4th, 9th-11th, and 16th-18th)

(Fun fact- Milwaukee is freaking beautiful in the summer.)

For those outside the Midwest there is also some positive news!

CoS - The pent-up demand for live music will result in a historically busy 2022. In fact, Live Nation has already booked twice (!) as many shows for next year as it did in all of 2019.

“Around the world, people are showing the need to get out and socialize once again which reinforces our expectation that a return to concerts will be the logical progression as vaccines are readily available to everyone who wants to get one,” Rapino said. “This is generally already the case in the U.S. where we are confidently planning our reopenings, particularly for outdoor shows, and we expect many of our other major markets will follow this summer.”

To that point, the company has already confirmed several significant tours for 2021, including Dave Matthews, Megadeth with Lamb of God, Brad Paisley, and Chris Stapleton, as well as fall festival dates for Bonnaroo, Rolling Loud, and Electric Daisy Carnival. Festivals in particular are selling out in record time, according to Rapino.

“We are already seeing confirmed major tour dates for 2022 up double digits from the same time pre-pandemic in 2019 for 2020,” Rapino added. “Many of these artists will have multi-year tours, spanning the U.S., Europe and often either Asia or Latin America, setting us up for a strong multi-year growth run.”

Among the tours already announced for 2022: Rage Against the Machine and My Chemical Romance, both of which are embarking on long-awaited reunion tours; Bad Bunny; Roger Waters; and Rina Sawayama.

So these next 18 months are going to be crazy. More live music than the world has ever been treated to. Sure we'll all be broke because of the skyrocketing demand for tickets and the multitude of shows taking place over that span, but it will be worth it.

I've been banging the drum all year that this summer is going to go down in the history books as the greatest of all time. Each day its looking more and more like the case.

p.s. - throwback to when I got to play Lollapalooza in 2011 with Sammy Adams right after a monsoon hit. Bonkers