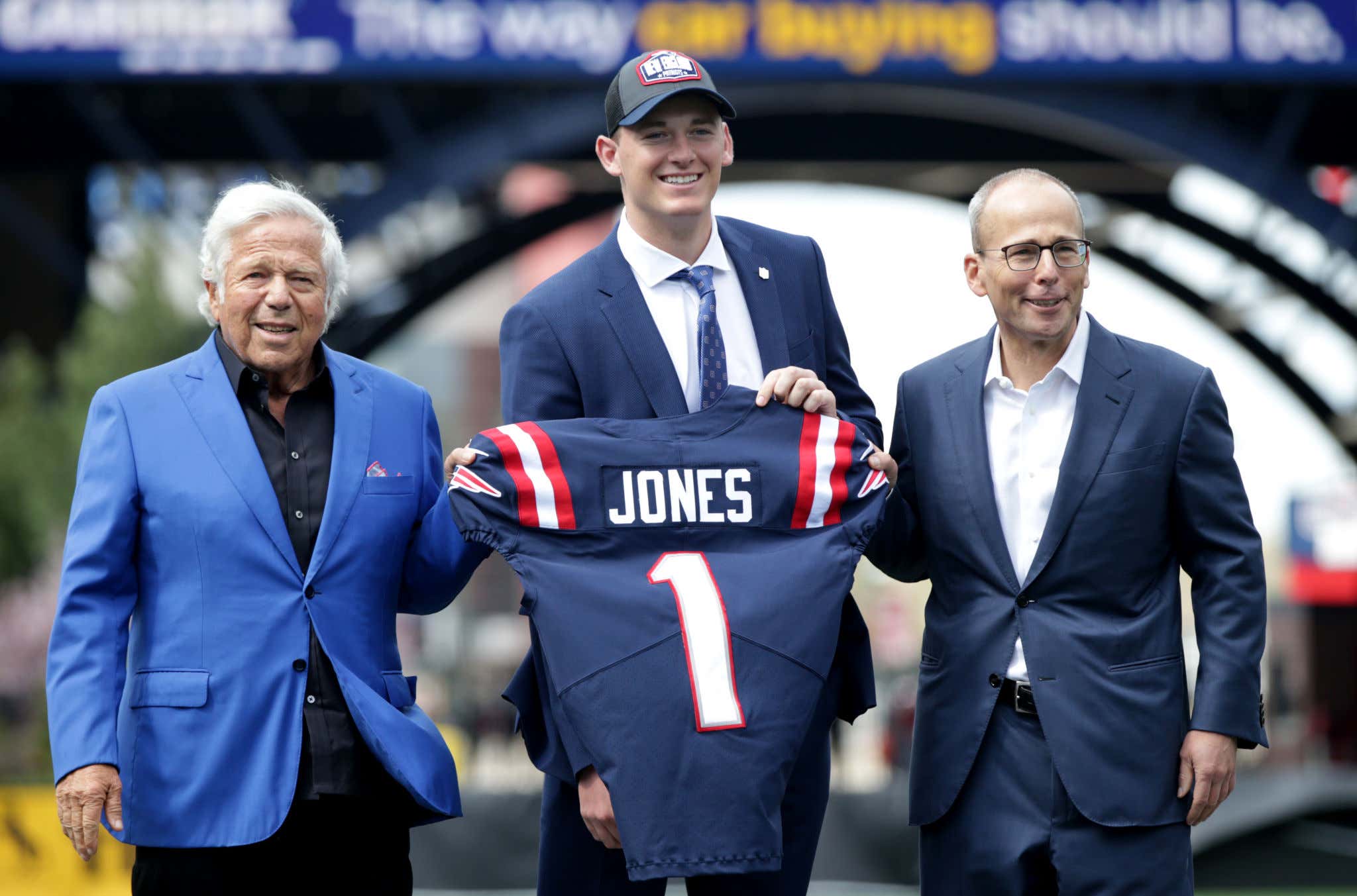 Unless you're sane and well-rounded enough to be thinking about things other than the Patriots offseason, you no doubt recall that a few weeks back, Mr. Kraft gave an interview where he discussed his team's uniquely aggressive dive into the deep end of the free agency pool and a more "collaborative" effort being made in prepping for the draft. "[T]he teams who draft well are the ones who will be consistently good," he said at the time. "I don’t feel we’ve done the greatest job the last few years, and I really hope — and I believe — I’ve seen a different approach this year."

Those comments were naturally followed up with the predictable anonymous sources coming out of the woodwork like carpenter ants to say, essentially, that every bad pick that the team has made is all Bill Belichick's fault. And none of the great picks were his. Basically people who refused to put their names to it claiming, "I was against taking the guy that didn't work out but he wouldn't listen to me. But the successful ones? They were all me." So there's no way to check whether or not there's any validity to what they say. As JFK put it when the Bay of Pigs was running red with the blood of commandos as he took responsibility for a raid his top military people insisted was going to work, "Success has many fathers, but failure is an orphan."

About the only thing we can take as actual truth is what Mr. Kraft said about "a different approach." The idea of a more "collaborative" draft looks to be confirmed by this video the team released, with Belichick going around the room to make sure everyone was on board with the Jones pick:

It also would appear to be the case if this report from MMQB is to be believed. And I for one would like to think it is. Because I like the sound of it.

I do know this year was a whole lot different with assistant director of player personnel Dave Ziegler, scouting exec Eliot Wolf and national scout Matt Groh moving into more prominent roles in the aftermath of Nick Caserio’s departure for Houston. What I don’t know is Belichick’s specific motivation for it. Part of it, to be sure, is probably that the rules made it much harder to put coaches on the road for this year’s predraft process. …

I’m told that Belichick was in the office more in the spring this year than in the past, held more formal draft meetings, something that really hasn’t happened under Belichick before, and reworked other past practices with the help of Ziegler, Wolf and Groh.

The result to scouts outside the organization was obvious: The players that the Patriots took were all highly productive college players.  …

Again, the criticism of Belichick I’ve heard in the past when it comes to the draft is that he overvalues traits, overvalues his own personal experiences with players and connections to their coaches, and makes too many smartest-guy-in-the-room picks that ignore how the rest of the league might see a player.

This, conversely, was a draft full of players with production over traits, drafted in a range close to where they were expected to go.

And here’s the thing: Any criticism of Belichick has to be tempered. The guy is the greatest coach in the history of the league, and he didn’t get there by bombing this important piece of the team-building process for two decades.

To me, the biggest takeaway from this is that - either through the unique circumstances of trying to evaluate prospects with limited travel and no Combine or simply a effort to improve the process - that one thing Belichick is determined to do is not outthink himself. To not get cute like he's been guilty of at times in the past. For instance, with constant draft day trades that move him up and down the board, and with off-the-wall picks. In other words, to simplify things and not overthink it. Like a golfer with one swing thought instead of running through an entire Golf Digest as he stands over the ball. Which is why we saw one trade, and that was to move up for Christian Barmore, a highly graded prospect at an area of need who had inexplicably fallen to No. 38 but wasn't likely to fall much further.

As far as the reaches, MMQB specifically mentioned safeties Jordan Richards (64th in 2015) and Tavon Wilson (48th in 2012). Look, every team misses picks in the 2nd round. And every other round, for that matter. It's the nature of drafting. And for sure, Belichick has struck adamantium with some of his supposed "reach" picks. (Jimmy Garoppolo, anyone?) But in the case of Wilson, I was watching that Friday night in a bar (hard to believe, I know; but try to paint a picture in your mind's eye of me in a drinking establishment) with about two dozen Patriots draft nerds. And when his selection was announced, not one of us had ever heard it before. Nor could anyone of the dozen or so people who brought draft magazines with them find him listed in any of them. In fairness to Wilson, he did have four interceptions as a rookie. But on his way to a career total of eight. And even though he's been in the league for nine years, in four seasons in New England he was never more than a subpackage guy.

I'll give you a more recent example. Last year in the 5th round they took kicker Justin Rohrwasser. He was the first player to come off the board that ESPN didn't have a highlight reel for. And no one on the panel of either network covering the draft was familiar with him. He ended up getting beaten out by a 37 year old Nick Folk, spent the year on the practice squad, and was released. He very easily been a camp invitee. Instead he was the first kicker taken in the draft. And that's a position that ought to be relatively pretty damned easy to scout. I mean, he either gets the ball through the uprights from long distances away or he doesn't.

So while I couldn't agree more that criticism needs to be "tempered," and the "Belichick can't draft" thing is the falsest narrative in the world over the last 20 years, I'm all about any organization-wide effort to eliminate the cute draft moves. Not every ranking of prospects is accurate. Guys targeted by one team would be bad system fits on another. And no one in the world is more qualified to know what Coach Bill's needs are than GM Bill. But keeping it simpler, which is what he appears to have done this year, is fine by me. Even if a guy doesn't work out, at least let's have him be someone who made sense around the spot where he was drafted. Then at least it's the vagaries of a decidedly inexact science and not being too clever for your own good.

This whole issue reminds me of an argument a buddy of mine and I were having about Red Sox manager Joe Morgan, whom I loved but he drove my friend crazy because he was constantly playing hunches instead of going with the conventional baseball wisdom. Ol' Walpole Joe would think nothing of sending up a lefty pinch hitter to face a lefty or call for a bunt with two strikes and so on. "Just once," this friend said, "I'd like to know that when we lose, we lose going by 'the book,' instead of a gut feeling Morgan had." That was a valid point then, and it applies to the Pats draft now. Sure, drafting 2nd round prospects in the 2nd round sounds crazy, but just it's crazy enough to work.