Crains - The Chicago Bears say conversations are proceeding nicely with City Hall about returning games to Soldier Field later this year with a full or nearly full house of fans cheering—and booing—the team.

But they’re not denying rumors that the team nonetheless has begun kicking tires on a potential future move to the site of Arlington International Racecourse, which is for sale and is likely to be demolished.

In a phone interview, Scott Hagel, the team’s senior vice president for marketing and communications, flatly denied that the National Football League team is upset that Mayor Lori Lightfoot’s administration has not moved more quickly to signal that fans will be allowed back in the stands by late summer, when the team begins its pre-season games.

“That couldn’t be any farther from the truth,” Hagel said. “We’ve had really good dialogue with the city.”

However, Hagel gave no such denial when asked about the team’s potential longer-range interest in Arlington Park, which recently was put up for sale by its owner, Churchill Downs Inc., best known for staging the Kentucky Derby.

“I wouldn’t be able to tell you,” said Hagel, who gave an interview a day after I first called the team asking them to comment on the Arlington rumor.

When asked directly if the team has begun talks with Churchill Downs, Hagel replied, “our priority is about Soldier Field.”

When told that such a statement left the impression that other possibilities are on the table, Hagel said, “Our focus continues to be on Soldier Field. . . .I can’t say more."

A city spokeswoman confirmed that talks with the Bears about resuming games at Soldier Field later this year are going well. The Bears “have been a really good partner,” she replied. And Arlington? “I don’t know anything about that.”

Burn it all down baby.

I think this move is exactly what the Bears need. A fresh start. Blank slate if you will. Distance themselves from the past and begin anew.

Before Bears fans have an aneurysm, I am joking completely.

I would never advocate for the team with one of the best stadiums in sports to abandon it due to the ineptitude of the city it was constructed in.

When I first moved to Chicago Soldier Field 2.0 had just been completed. People HATED it. I couldn't understand why. They claimed it looked like a spaceship landed inside the old stadium. But my first visit to it showed it very differently. The new United Club was unreal (something I think newer stadiums copied going forward), the video screens were large for the time, but not obnoxious. The sound booms. The concourse on the first level is wide enough where you're never cramped, and if you can find a spot where the ushers aren't assholes you can watch with great sightlines.

Also, amazing homefield advantage. One of the best in football. Not on Arrowhead's level of loudness, but much better than the quiet Church of Belichik at Gillette.

And last but certainly not least, the BEST concession lines in sports. You would have to go out of your way to wait in a beer line at Soldier Field. The one thing the McCaskey's have got right in their lives. Whoever is in charge of the concessions at Soldier knocks it out the park.

So needless to say, I love the place and didn't understand the hate.

Then I came across what Soldier Field used to look like and my mind was blown.

Look at this place. 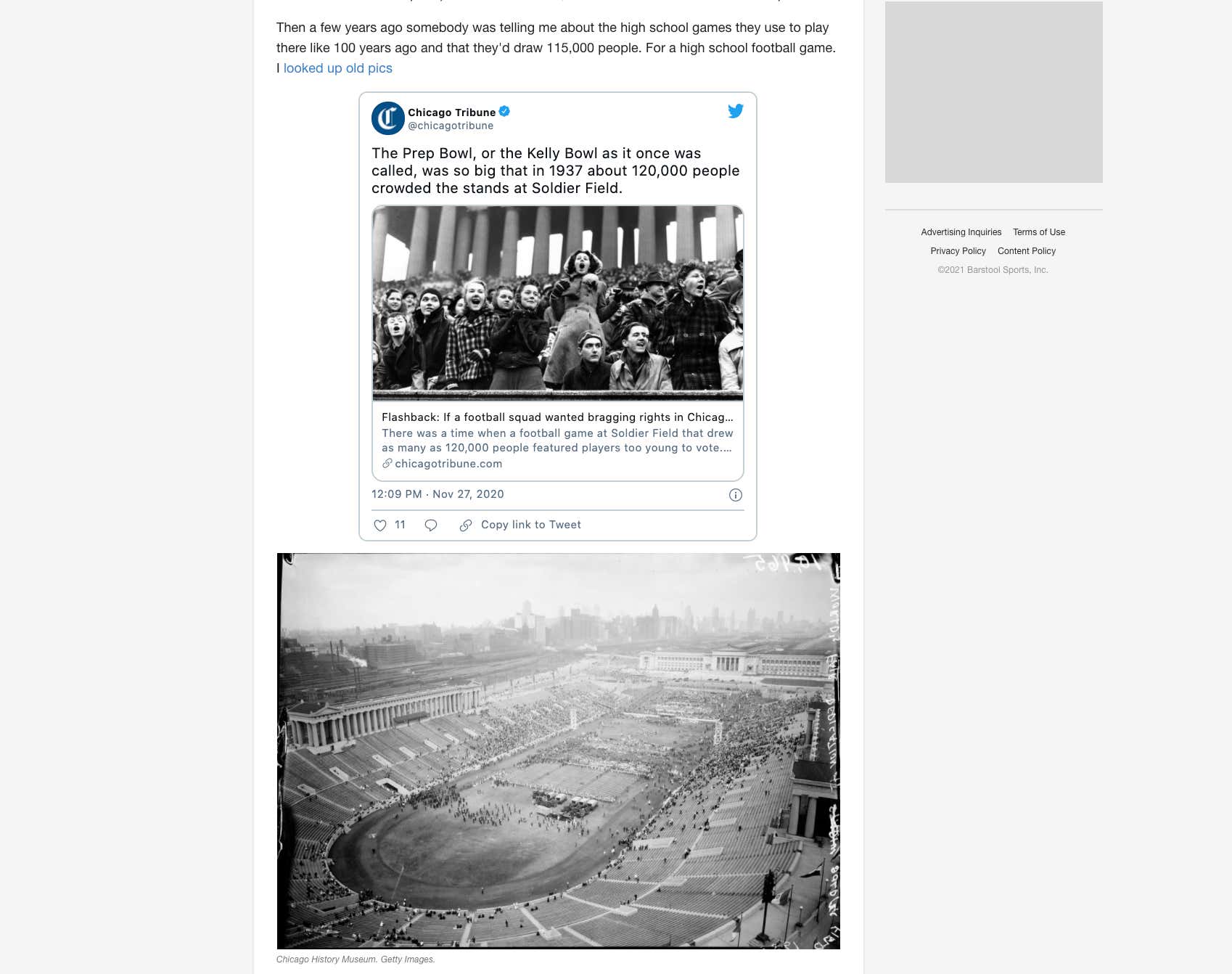 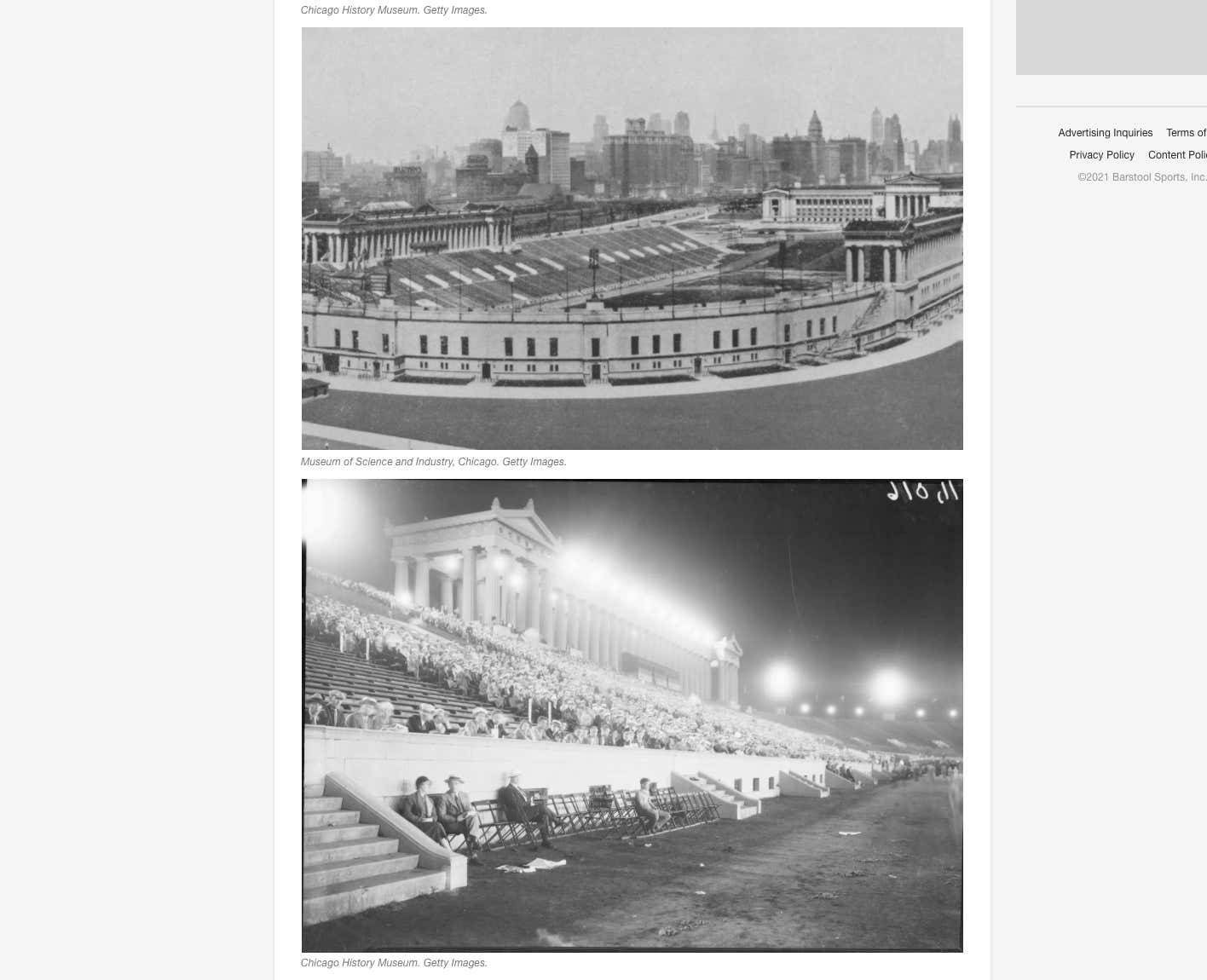 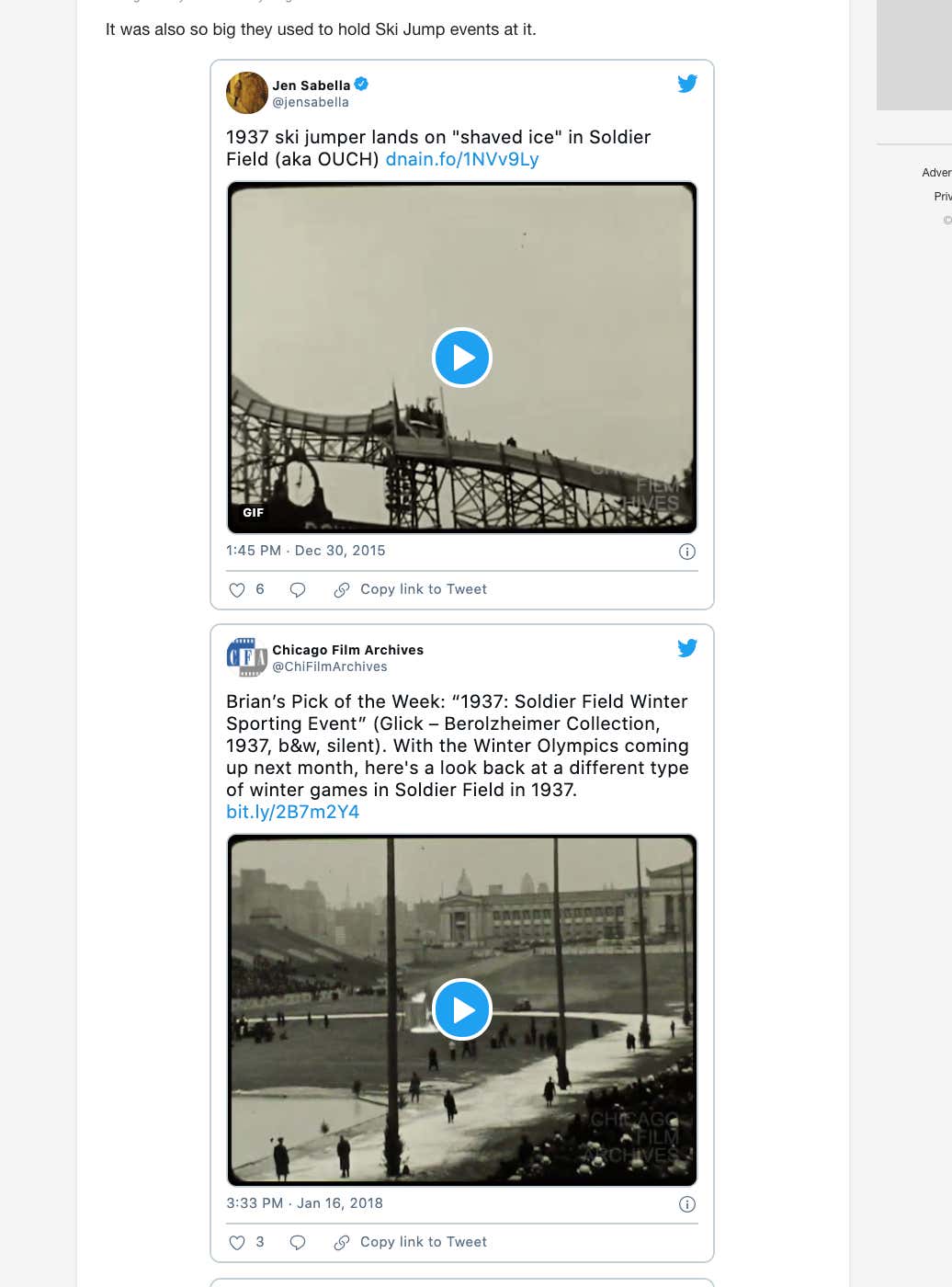 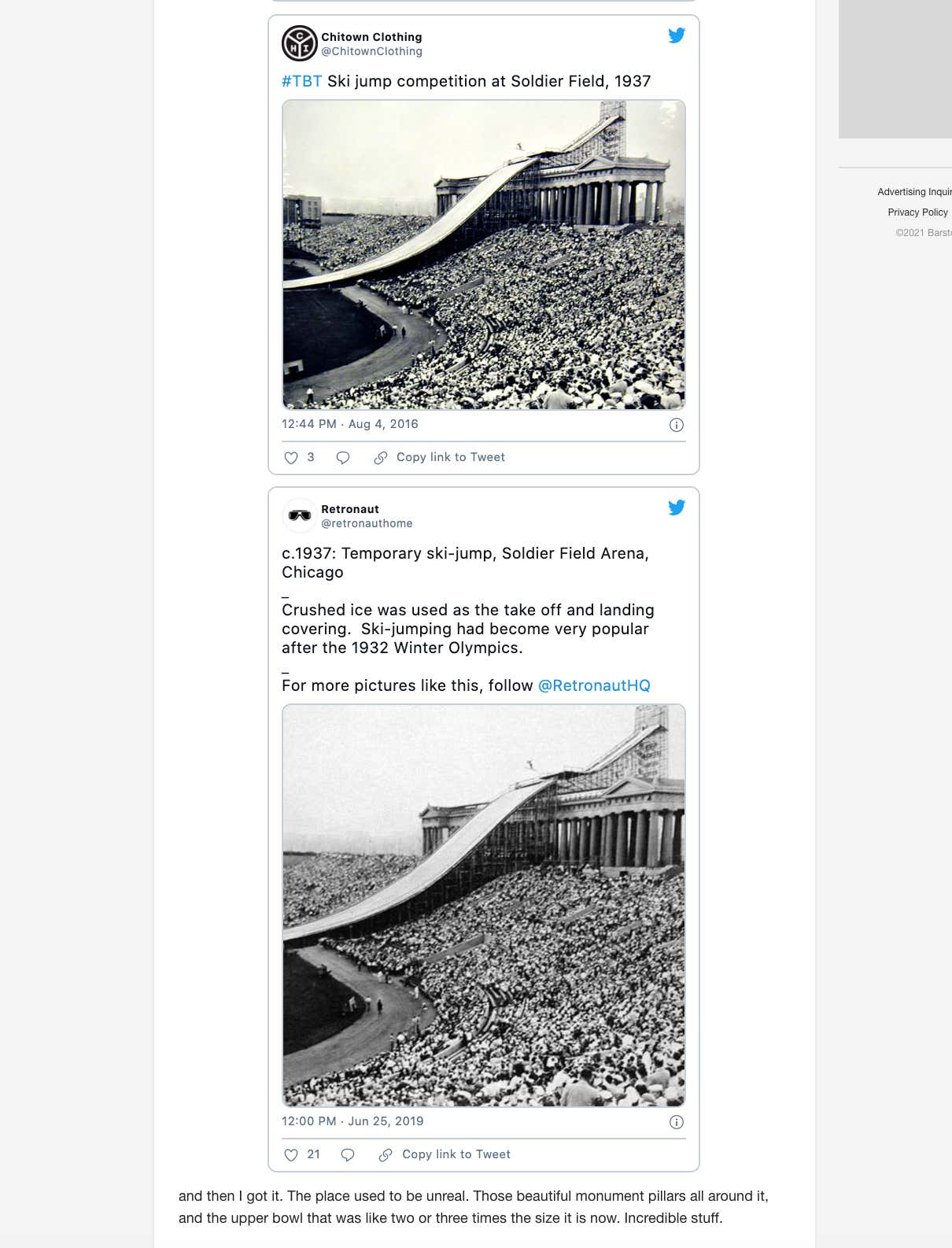 Now THAT is an American sports marvel.

Now, thanks to the bang up job Lori and Co. have done, the Bears are considering heading to the burbs.

Granted, its to another absolute gem of a place, Arlington Racetrack, but still.

Crains - Mayor Lori Lightfoot today shed a little bit of light on whether the Chicago Bears really are considering moving to the site now occupied by Arlington International Racecourse or just using it as leverage to improve their situation at their current home, Soldier Field.

But the mayor left key details ambiguous, saying “conversations” are occurring about the future of the National Football League franchise.

Asked at a news conference about yesterday’s Crain’s report that the team wasn’t denying an interest in possibly moving to the site now occupied by the Arlington track, which is for sale and likely to be demolished, Lightfoot said “a couple of data points” are of note.

One is that, as Crain’s reported, the Bears’ current Soldier Field lease with the Chicago Park District runs until 2033. “The NFL doesn’t let any teams break their leases,” she said.

However, Lightfoot went on to add that she had “a call with senior (team) leadership in the last two weeks.” I’m told that conversation involved as least one member of the team-owning McCaskey family.

“We have a good working relationship with the Bears . . . (but) there are things they’d like to see differently at Soldier Field, and we want to do whatever we can to accommodate it,” Lightfoot said.

“It’s a great, iconic site. But it’s a challenging site, and I think it’s incumbent on us as a city to step forward and look at ways in which we can make sure that the Bears fans, but also the Bears as an organization, have the best opportunities to maximize the fan experience and of course maximize revenues," she said. "We’re going to keep those conversations going.”

Sources claim the Bears are asking for more signage as well as the means to generate more revenue in and around Soldier Field. Aka bars. Beer stands.

For those not from here, in Chicago we have a special way of doing things.

First, you need to pay through the nose for the “right” to do things that are totally standard in other cities.

When it comes to generating revenue, you have to jump through a million hoops in order to ensure the City and the State eat first. And most. Its so tedious that by the time you reach the 5 yard line, you don't even feel the passion to do business anymore.

So for as little respect as I have for the McCaskey's, I feel their pain here and don't blame them for kicking the tires on a potential move.

Prayers up that they're just posturing to get the city to bend a little to their requests, and that they're not actually considering moving out to Arlington. That drive would be fucking misery there and back. DUI city and $200 ubers all day. Carnage on the Metra. Lose lose all around.