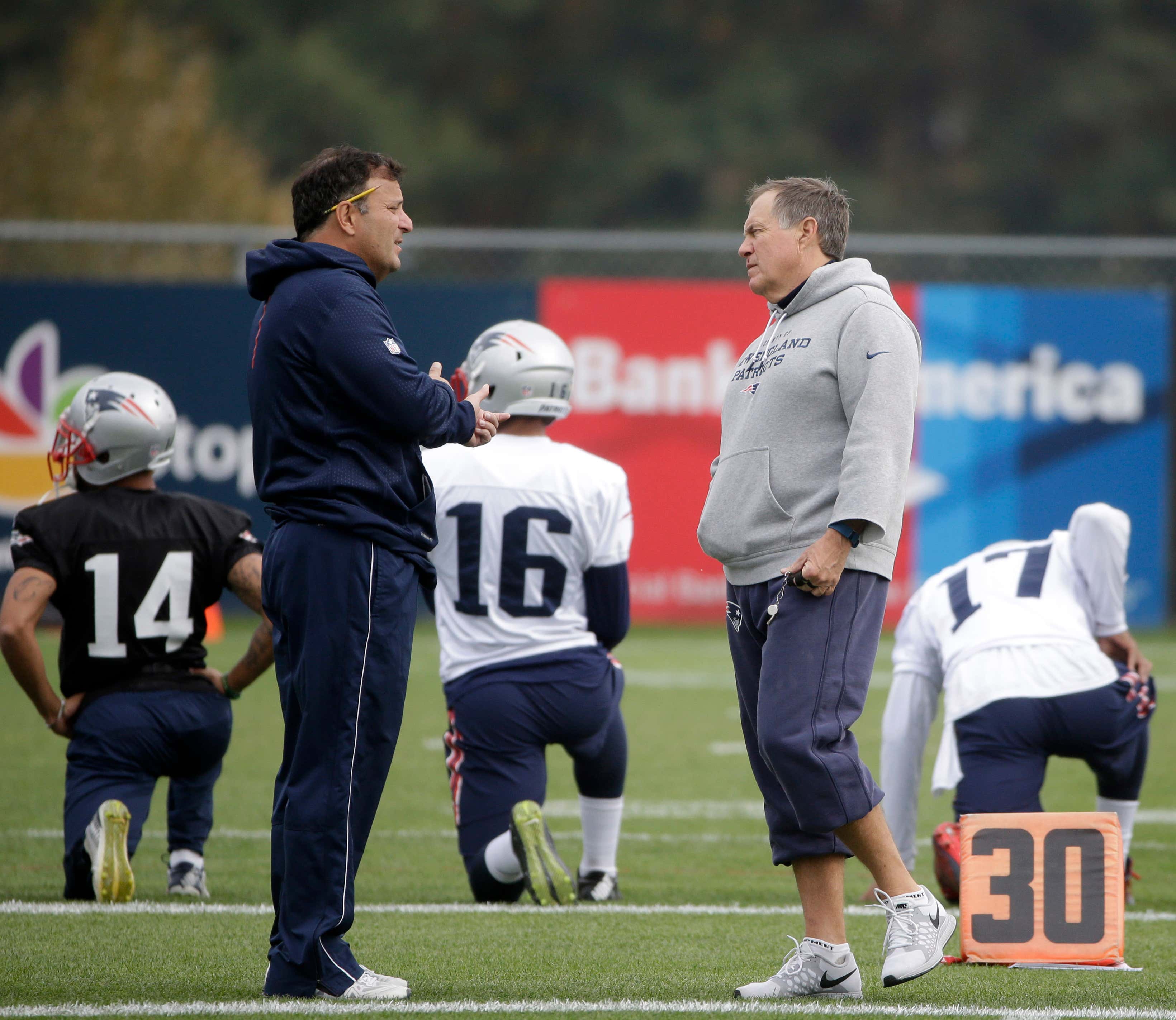 In the football media business, the word "insider" gets thrown around a lot. But when it comes to covering the Patriots, there are few people who can honestly claim to be in the informational loop. Even me. My connection with Bill Belichick is more spiritual/emotional/psychic. It's based on the fact that I spent two seasons doing live interviews with him on the radio and talk to him at training camp. We have that mutual respect that exists between the greatest football mind of all time and a guy who spent years as the defensive assistant on the JV squad of some youth teams, so we can talk on the same level. But I would never suggest that he'd calling me to give me a head's up on personnel moves or game planning or anything of the sort. As much as I like to role play that he does in my private moments.

But when it comes to NFL coverage, there are a few who can legitimately claim to be close to His Hoodedness. Even if he's not sharing information on a daily basis with him, there's a trust that exists after years of working together. Scott Pioli for one. Charlie Weis. And Mike Lombardi, for sure. They not only worked together in Cleveland and New England, but Lombardi's son is on the staff and it's reasonable to assume he's still someone who Belichick reaches out to as a consigliere. So when he cites sources he has in the league, my default setting is to assume it's not just grandstanding, hot take bullshit. And on his latest podcast, Lombardi has a couple of Patriots-related nuggets that I give total credibility to.

First, is that Thursday night during Round 1, New Orleans was scrambling for a way to move up ahead of New England to land Mac Jones:

"New Orleans was trying to get into the top 10 to get a cornerback, there's no doubt. I think it was [Jaycee] Horn. They tried, but they couldn't get in there, they were too far back to get in the top 10. But, and I've had this confirmed to me by two teams, they were trying to get up above New England to get Mac Jones. I don't think there's any doubt about that. Everybody will deny it. I'm just telling you. They couldn't get there. Why? Because Minnesota traded with the Jets and Minnesota didn't go back as far as New Orleans, and got a good deal. No. 13 wasn't moving because [Rashawn] Slater was there, and the Chargers weren't going to move. No. 12 wasn't moving because Dallas was going to take [Micah] Parsons. No. 11 became [Justin] Fields. So, there was nowhere for them to go. I don't know if the Saints called New England to try to trade for that pick or if they knew New England was going to just take Mac Jones."

You have to appreciate not just how it validates the selection of Jones, but the incredible, ballsy patience of Belichick calmly sitting there at 15, reading the board after Chicago moved up to take Fields and calculating that he'd still be able to get the QB he wanted without throwing in extra picks. And that, of all teams, it was the Jets who cockblocked the Saints, inadvertently giving the Patriots the quarterback who will haunt their dreams for the next 20 years just makes it all the better.

Believe me, this report is a big deal. Especially right now, given that the Boston sports radio anti-Belichick extremists and the easily deceived loners who have the stations' numbers in their contacts are actually arguing something along the lines of, "Belichick didn't actually want Mac Jones, because if he did, he would've moved up to take him." Which, taken to its illogical conclusion, means that you could say the same thing about literally every other pick from No. 2 to No. 259. Anyone who got anyone who wasn't Trevor Lawrence had to "settle" for a guy they didn't really want. It's insane. But it's the length these frauds will go to whip their imbecilic callers into a frenzy. Worse, it ignores the fact that Jones was a highly coveted prospect. By no less an authority on quarterbacking than Sean Payton. So a win for New England just becomes an even bigger win.

It's the next thing that Lombardi says about the Pats that won't go over so well. At least not with people like me and the hundreds of thousands of others who want to see the Mac Jones Era start, and want to see it start five minutes ago. When asked how soon Jones is installed as the starter, he says:

I hate to differ with a guy I spent a paragraph pumping up as someone who understands the inner workings of Foxboro. But, I hope Lombardi is dead wrong on this one. I think I can speak for most of New England when I say we don't give a rat's taint if we ever see the power out of the shotgun or the quarterback sweep ever again. We got more of that than any of us have ever witnessed in 2020 and the results were a lot of 2nd & 8, 3rd & 6, incompletion, punt team. We saw Patriots teams actually running out the clock at the ends of halfs, which is unthinkable. If I have to spend the rest of my life without a read option run, I can live with that. Just give me that sweet, sweet "great anticipation" and "deadly accurate" passing and let us move on from last year's failed experiment.

On one hand, I do get the logic. There has been a trend in the league to sit high value rookie QBs behind an average-to-below average veteran for a while. Patrick Mahomes made one start as a rookie. Lamar Jackson appeared in all 16 games as a rookie, but Joe Flacco was the QB1 for the first nine games. Last year, the second and third quarterbacks drafted started the year holding a Microsoft tablet. Tua Tagovailoa took over from Ryan Fitzpatrick in Week 6, and Justin Herbert got the start over Tyrod Taylor in Week 2. Not to mention the greatest QB of all time sat for a year, didn't get a start until the franchise starter got hurt in the first game back from 9/11 and won his first Super Bowl that year. There's a lot to be said for preaching patience. It can be beneficial to the long term success of a quarterback.

But at the same time, patience was for last year. We didn't just witness the biggest free agent Supermarket Sweep of all time followed by a highly successful draft just to watch a repeat of 2020. What do we want?! Instant gratification! When do we want it?!? What do you think?!? And all that.

That said, I totally agree with one point Lombardi makes. It doesn't matter where Jones was drafted, what his prospects are or even that his offensive coordinator at Alabama thinks he's "the most qualified rookie quarterback to start in Year 1."  His playing time is going to be won on the practice field, in the meeting room and in the weight room. Nothing is going to be given to him. Belichick benched Bernie Kosar and Drew Bledsoe when he had just signed the biggest contract in NFL history. He's not going to blink at putting a hat and a headset on the quarterback who gives him the second best chance to win the first game, regardless if he's the 15th pick or the 2015 league MVP. He'll bench who he feels he needs to bench and then go home and sleep like a baby for his usual three hours.

If there's one thing that I do worry about, it's the human factor. Cam Newton is universally liked. And with very good reason. Last year he came in under impossible circumstances. With a short offseason decimated by Covid protocols. He worked his ass off. Bonded with his teammates. Got sick. Recovered. Kept working. Took responsibility when things didn't go well. All while making long snapper money. It's worth considering how the team as a whole will respond if the job is taken from him and handed to a baby faced, somewhat doughy 23-year-old who, when he and Newton are standing next to each other, looks like Jonah Hill next to Channing Tatum in "21 Jump Street." That consideration is not everything, but it is not nothing, either. I would just hope that the players, like the fans, just want to see the guy out there who's most capable of running the offense, converting 3rd downs, completing throws at all levels of the field, and finishing drives. All of which were in short supply last year.

It's going to be one of the most fascinating storylines in Boston sports in ages. I'm just glad we'll get to witness it, instead of watching Jones compete for the starting job in New Orleans. Thanks, Jets!