I woke up today feeling fresh as a daisy. Team Chicago is about to run away with the championship in The Dozen trivia tournament in NYC and the White Sox are about to catch FIRE in baseball. If you aren't on my level yet, play this song as you read the blog to get your juices ffffllllooooowwwwwiiiinnnnnnng:

THE CHICAGO WHITE SOX POSITIVE VIBES ONLY TOUR IS LEAVING THE STATION RIGHT NOW!!! GET IN OR GET THE FUCKKKKKKKK OUT!!!

1. People have gotten on my ass about being negative this year. While maybe true, I just hated TLR's on field tactics to start the season. It was RARE that I said anything negative about a player. I just don't think TLR's done a good job of putting the team in the best position to succeed on his end. Some players have struggled and some haven't; that's baseball and I don't say shit when players are struggling, typically. Baseball is a hard sport and everyone goes through periods of struggle.

What's not baseball is actively sitting Andrew Vaughn 3x a week or not pinch hitting for Garcia/Lamb/Hamilton with the bases juiced late in games. That's just stupidity and I voice my opinion about it. Now, I'm assuming I won't have to.

2. I unfortunately gotta get the people up to speed on why this is happening. Why I'm not Luis Robert tore his hip flexor two days ago. To make matters worse, I'm in this foul and disgusting city they call New York:

There was NOTHING good to come from yesterday for me. When I say this, I'm serious - I had that anxious pitting feeling in my stomach like I got dumped or my dog died. I went to my hotel immediately after dinner at 730pm and didn't leave the bed the rest of the night... but I was up to 2am or so just staring at my computer. I love this team just a little too much.

Obviously there is no replacing a 5 tool, 5+ WAR talent like Luis Robert. None at all. Fangraphs had him as one of the Top 10 most irreplaceable players in the game and not just because of what he's turned into offensively, but as a defender and on the bases too. For everyone bitching about Hahn not signing suitable depth.... in this instance, there is no suitable depth for the mess that is the White Sox OF, especially replacing Robert. Robert, Eloy and Engel represented 2.5 of the White Sox starting OF and all three of them are on the shelf. The White Sox are on Eaton (who was going to platoon), Garcia, Vaughn and Jake Lamb getting regular reps with (I'd imagine) Luis Gonzales now. That's the 7th (!!!!) depth piece right there! No team on earth is insulated from injury that much.

But Sox fans helped me quell my sadness, this Sox fan in particular:

We all REALLY needed to hear that.  I LOVE the positive vibes right now. There is still a ton of reason to love this team and I woke up feeling great today. It is POSITIVE VIBES ONLY from here on out.

The White Sox aren't dead. They're very much alive and for myriad reasons. After the initial shock that made me want to kill myself, I thought about it and have decided that this team is going to the playoffs. Lay it on me, Jimmy!!!!

And here's why… I'm gonna go right down Mike Leach's list from above because he said it so perfectly and eloquently:

1. The AL Central is TRASH:

Absolute dog shit division. If the White Sox had Eloy and Robert for the full season they'd already be running away with it. The Twins looks like garbage and the Royals just pulled the best month they'll have all summer out of their ass, though they do have an admittedly nice offense. Oh, and the Tigers are the very worst team in baseball both with their record and the eyeball test. The Indians? Yeah the Indians offense is pathetic. Their team wRC+ is only 90 and Fangraphs has them as the 27th ranked offense as of yesterday. They scare me none and should probably start from scratch - trade Bieber, Ramirez, Clase, Plesac, Cevale, etc. and play for 2025 because right now they're in baseball purgatory. There is NOBODY in the division that will go on some crazy run of winning this summer. That in and of itself will help keep the White Sox afloat until Eloy/Robert get healthy or trades are made.

2. The White Sox Rotation is AWESOME:

Giolito, Lynn, Keuchel, Rodon and Cease are unequivocally the best starting 5 in the AL Central and one of the best starting 5s in the entire league, and that's before Giolito has clicked or Kopech (who's looked like the prince that was promised) has been added to the rotation. Lynn missed 10 days with the stiff neck too. Once the weather heats up, this staff has the potential to put the rest of the roster on its back and carry the team to the playoffs. I'm not guaranteeing that by any means, but I have nothing but faith in this starting staff. Time for each pitcher, from Gio through Cease, to sack up and pitch to their potential as often as possible.

3. Abreu and Grandal Are About To Catch Fire: 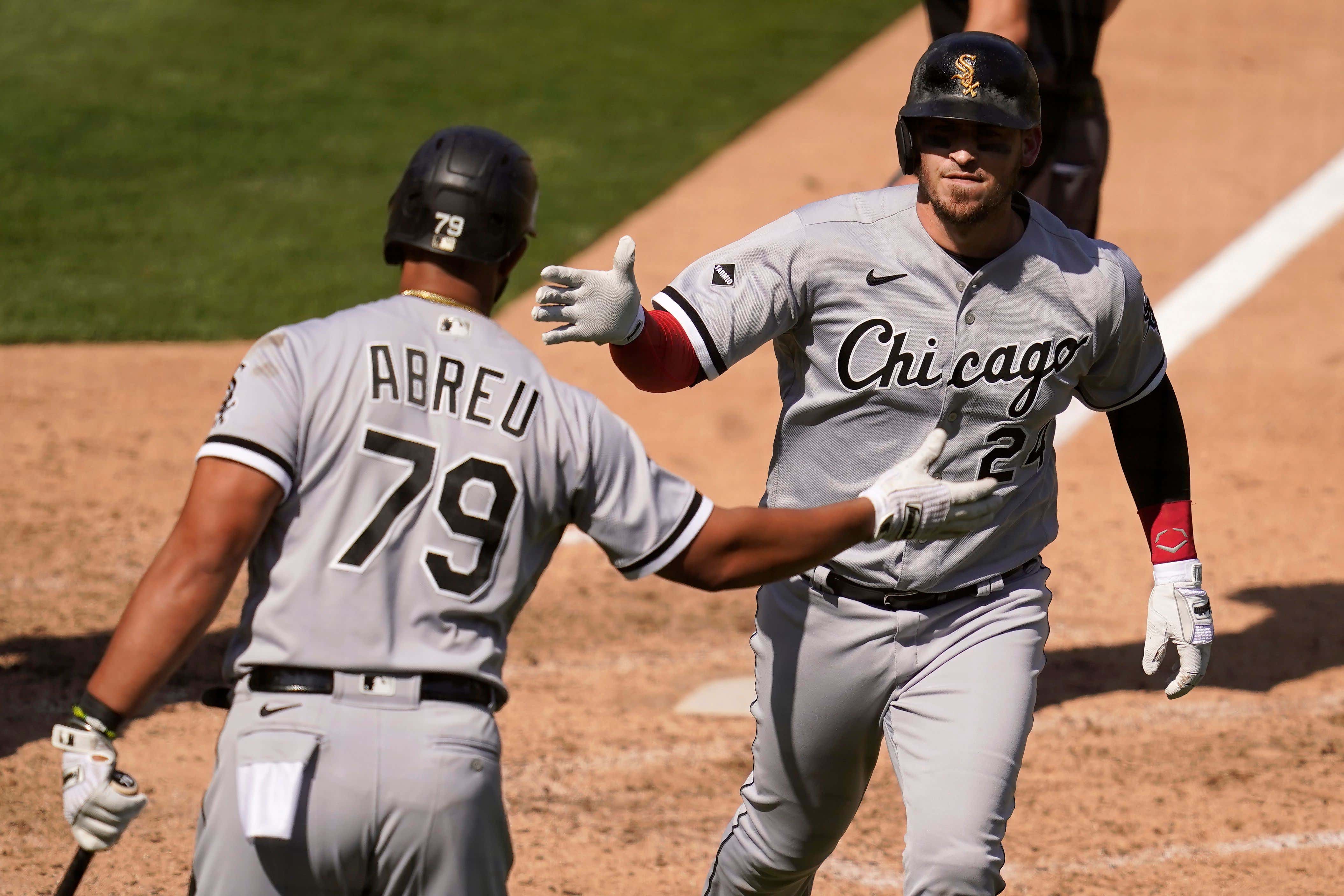 Jose Abreu won the MVP last year. This year, he's been very… eh. That will NOT continue and for a few reasons:

1. His BABIP is .238 right now compared to a career .326 mark
2. His career numbers in April are always pretty pedestrian compared to the rest of his stats:

3. And he's still hitting the ball hard when he isn't chasing: 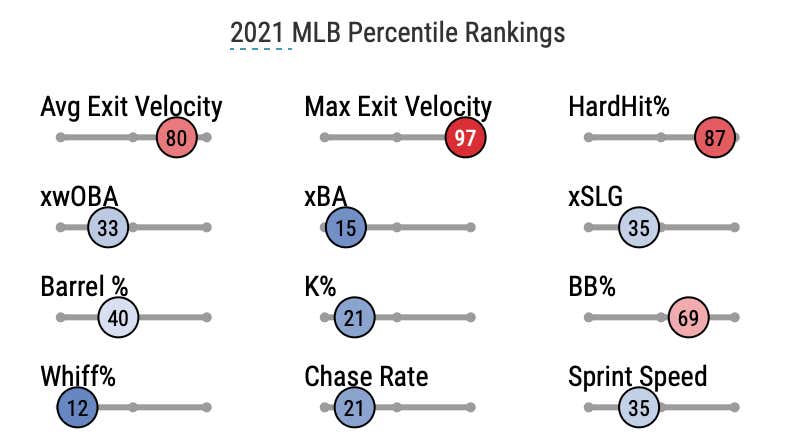 But he's swinging at and through too much shit out and off the plate. It's really hard to find a barrel when you're swinging at pitches that are 6" off the black. That's all fixable though and Abreu has gone through these spells before and has always, always ended up making an adjustment. There hasn't been a single year aside from the 60 game season and his rookie year where Abreu hasn't had a bad month where people think he's washed.

He's the leader of this team and will have a statue one day - don't be surprised when he goes OFF in the coming days and carries this offense through the rest of summer.

Grandal is another case though. He's looked… not good. He's walked and that's it. Everyone loves to point to Baseball Savant profiles nowadays and I think that's an easy way to grasp at straws and that in the end, only production matters but at the same time Grandal looks like he might be ready to turn the corner too: 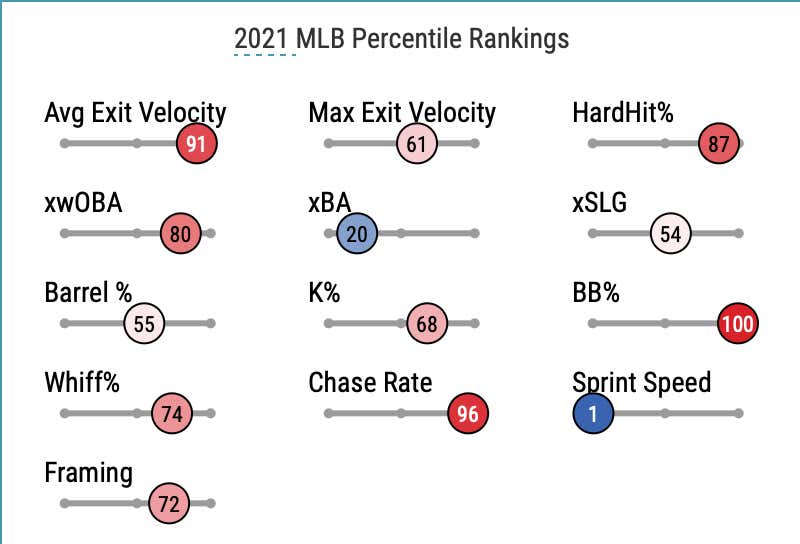 He's consistently barreling the ball up…. he's just not getting any lift on the ball. Everything is pounded into the ground pull side. I would LOVE to see Grandal start working that left/center gap and feel like that will open up the rest of the field for him.

Grandal's average launch angle is a full 5 degrees (!!!) lower than last year and 2-3 points lower than his career norm. That may not sound like much, but it's absolutely the difference in hitting a line drive into the gap or even over the fence, and hitting a ground ball into the shift. The rest of his numbers are great; he walks a ton and doesn't swing at shit off the plate so with just a little more time working on mechanical adjustments to add lift to the baseball on contact, I think we'll be seeing vintage Yaz in due time.

4. Andrew Vaughn gets to play more: 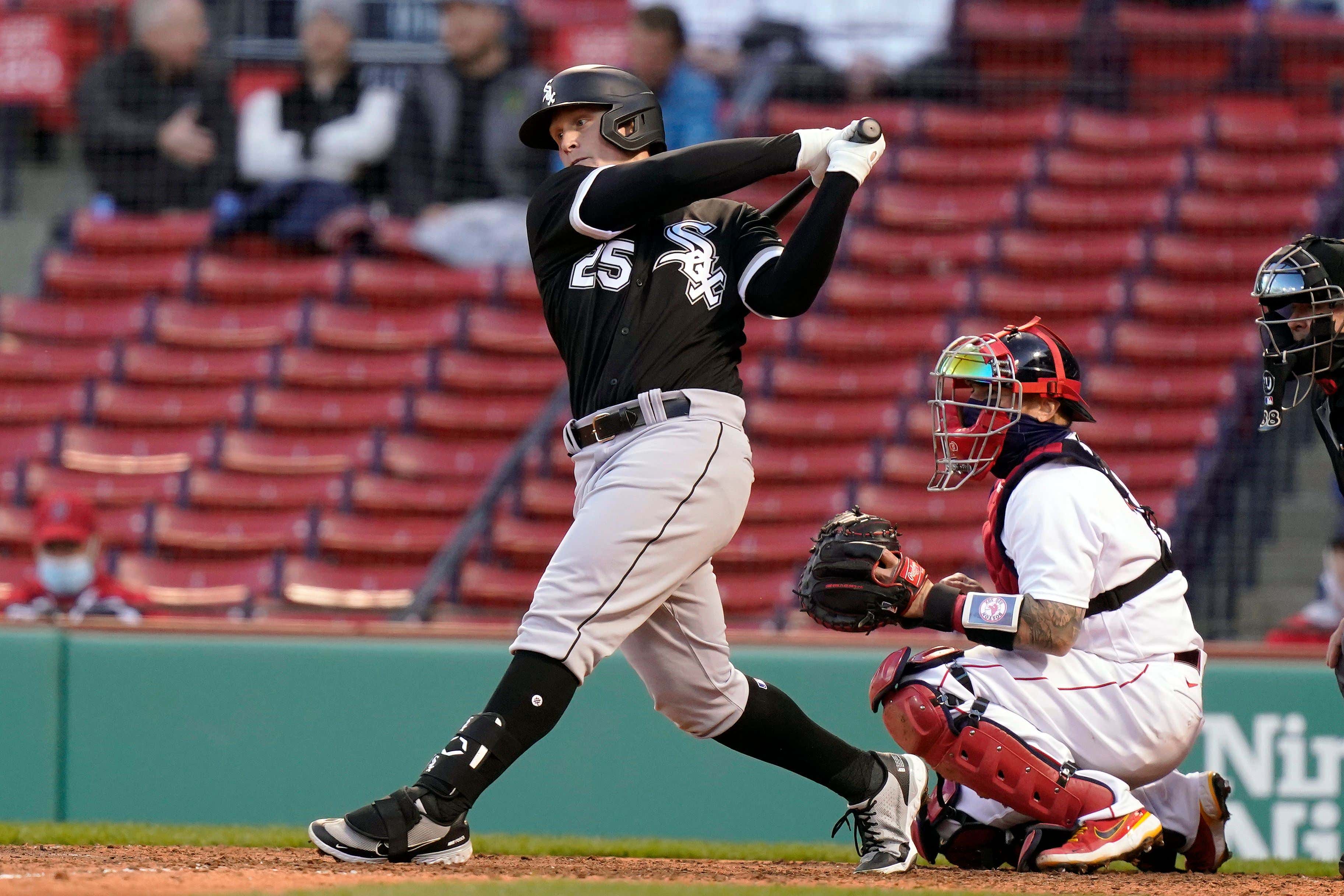 No more "he's gotta earn it" bullshit from LaRussa and if there is… we riot. But that's a different convo. Andrew Vaughn will RAKE in this league and outside of his first 3-4 games, has looked very nice both offensively and defensively. The power will come, but the patience, plate discipline, and use of all fields is already there: 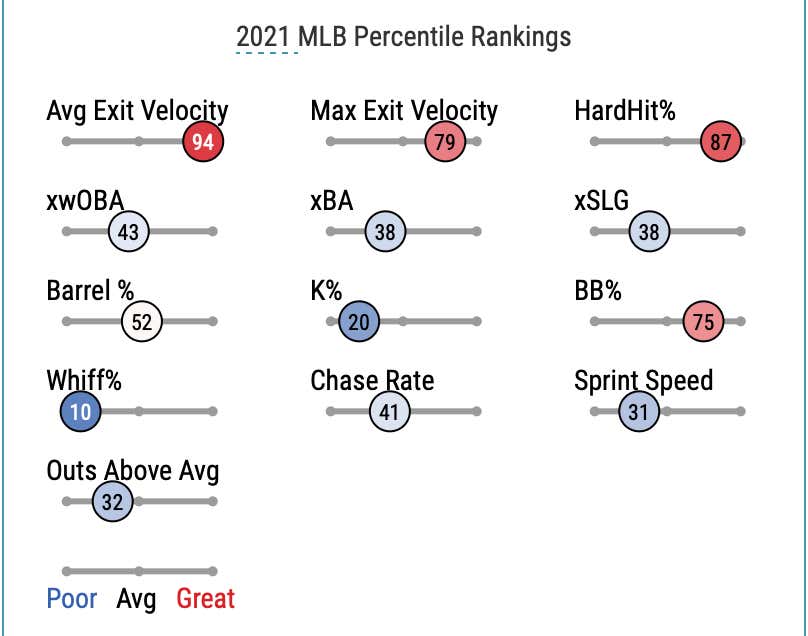 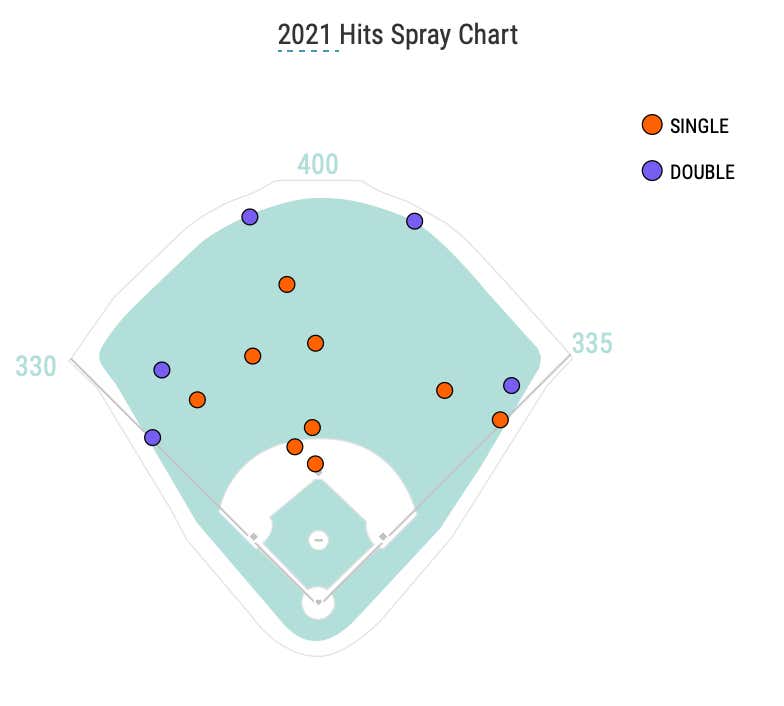 I'm Andrew Vaughn's biggest Stan. I have compared him to a RH hitting Freddie Freeman and think he has an outside shot at becoming just that offensively down the road. I HATE how LaRussa handled him in April and always thought he should be in the lineup every day, but that's whatever. LF is his and his only right now. Defensively, he's been GREAT all things considered. Offensively, once he hits that first dinger, the floodgates will open. He's another player that, like Lu, hasn't even gotten "hot" yet but has put together a nice little slash line for someone who's never seen a pitch beyond HiA:

5. The team will grind it out until late August/Early September: 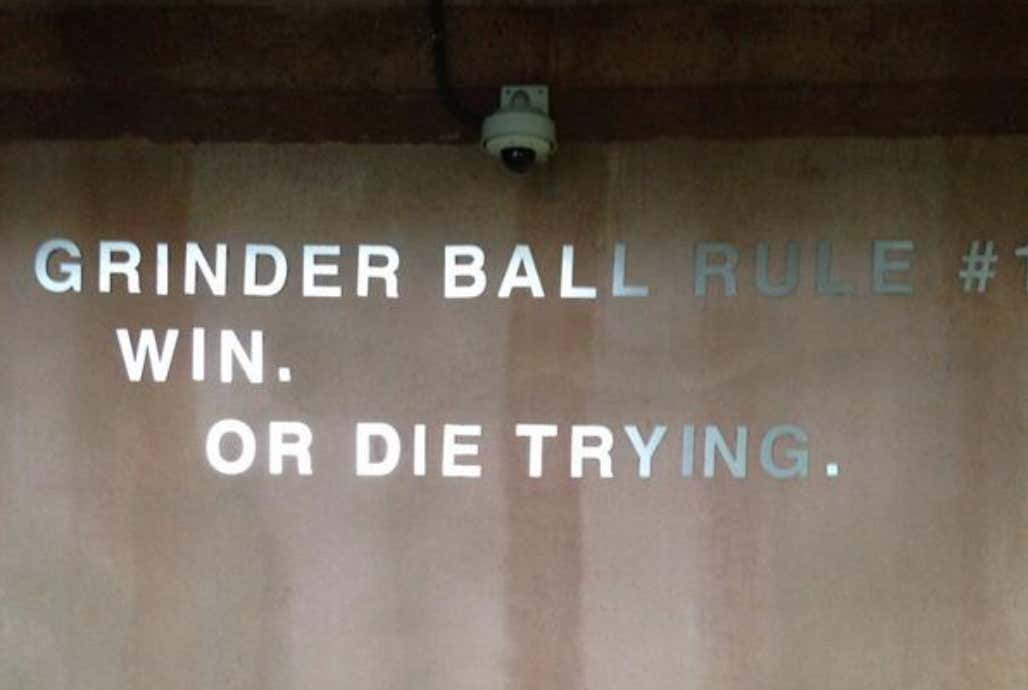 I've gotten to know a lot of the players on this team through interviews and Warzone and shit. I couldn't endorse them more on a human level. They make it really easy to root for this team. Good dude after good dude. Most of these guys were here during the dog shit post Chris Sale rebuild days where the Sox lost a LOT and guess what? They HATE losing. Loathe it. They work their dicks off to be great at what they do and there's not a doubt in my mind that the leadership in the clubhouse from Gio to Abreu and everyone else is hungrier this morning than they were yesterday, and guess what? They're going to at very worst weather the storm until Lu/Eloy get back later in the year, and if this team enters October fully healthy nobody on planet earth is going to want to play them…

…and yes, they are going to the playoffs. That's not a promise from me, that's a FACT.

I weirdly feel better about this team today than I did yesterday. Call me dumb, but I truly do. Let's get the boys hot and beat the ever living shit out of Cincinnati then come back home and go on a roll.

Oh and guess what - I didn't even mention Tim Anderson and the bullpen when is going to start to dominate any time now. This team is still loaded, though now thin, but I still LOVE IT