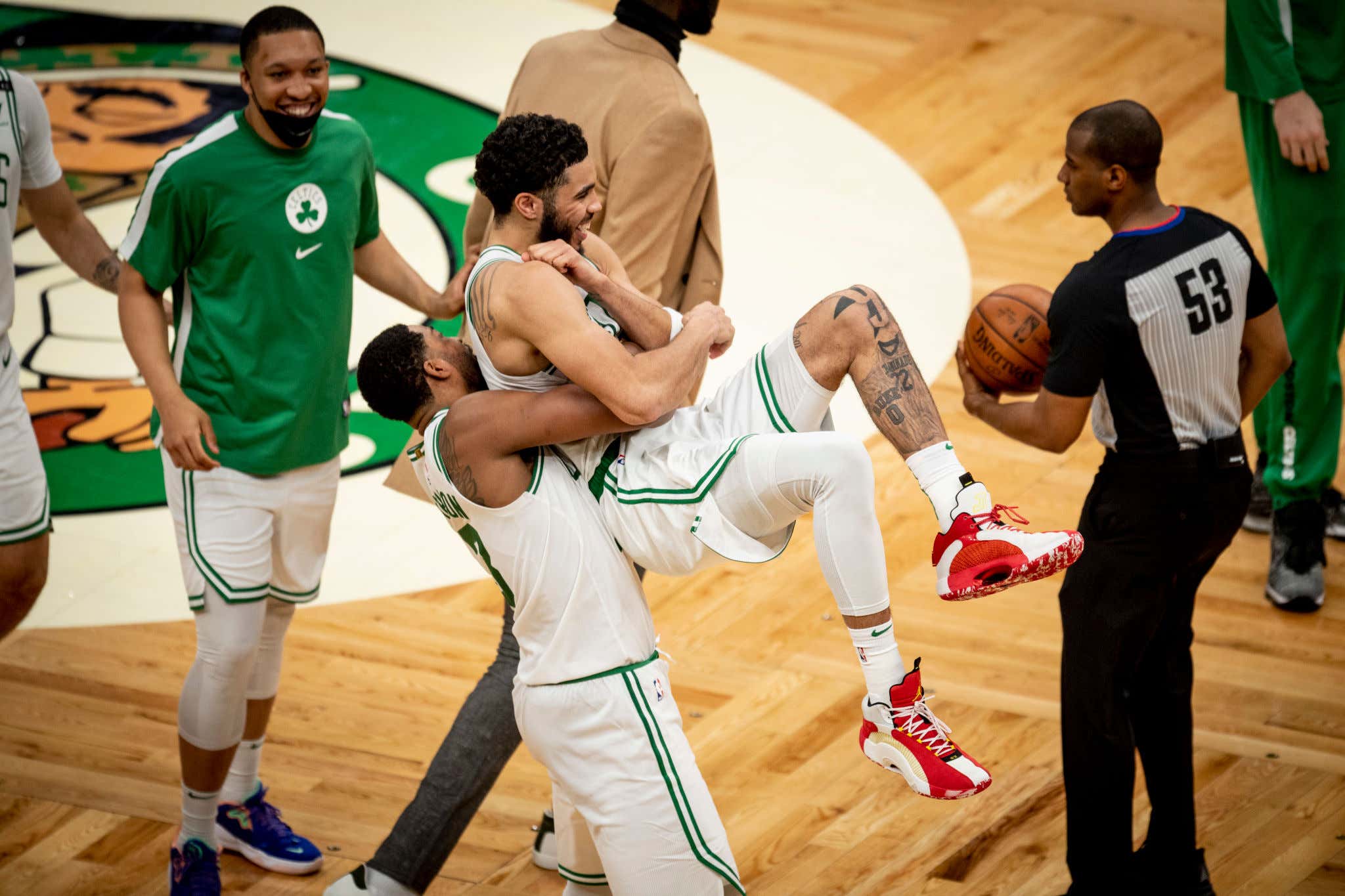 If this season has told us anything, it's that watching the Boston Celtics play basketball is not for the faint of heart. It's emotional warfare. The roller coaster of emotions you will put yourself through over the course of 48 minutes is really unlike anything else you can experience. The lowest of lows, the highest of highs, and everything in between all jam packed into four quarters of NBA basketball.

Take last night for example. One of the most incredible performances many of us have seen in our lifetimes, and I'm not being dramatic. I wasn't even alive when Larry Bird went out and dropped 60 on the Atlanta Hawks while only needing 1 3PM to do it. It was very cool to watch Jayson Tatum have a historic night and this team come back from being down 32. Take a minute and appreciate how fucking rare that is

But you know what is also cool? Not getting down by 32 in the first place. Doesn't this all sum up this season perfectly? At their best, they are capable of doing historic shit that none of us have seen before and at their worst, they can be down 29 points in 1.5 quarters to a team fighting for their playoff lives out West. All within the same 48 minutes. Brad basically said as much postgame. Yes, how things ended and what happened is truly special and very awesome, but this team cannot start games/play the way we saw in the first 24 minutes. You can't just ignore that half of the equation. That shit was bad and is the stuff that will ultimately cost this team in the end. It's great knowing that you have this unstoppable offensive machine who can go nuclear at any given moment, but you can't rely on that.

Games like this are why you can never quit on this team. A lot of people have given how they've looked all year, that's their choice. Sucks to be them as far as I'm concerned. Now let's be consistent here. This one singular win and performance doesn't drastically change anything. They still need to keep building better habits, playing the right way, and stack as many wins over these final 8 games as they can. But what it did show you is how intoxicating they can be when their best player levels up. That shit is fun as hell.

There were some that wanted to shit on Tatum's 53 in the comeback against the Wolves because "It WaS tHe TiMbErWoLvEs". OK…now what. The Spurs had won 5 of 7 heading into this game, are currently in the playoff hunt out West, and just beat the Suns a few weeks ago. What we witnessed Jayson Tatum do last night was not normal. It's not something casual that happens all the time. In fact, it's only the third time it's ever happened HISTORY OF THE NBA

if you want to keep things to just the Celts, we've never seen a player do what Tatum has done this season

Think of how many legends have played for this franchise and none of them, not a single goddamn one of them has had multiple 50 point games. Tatum has done it in the last fucking month. The closer you look at what Tatum actually did in this game, the more ridiculous it gets. It's become my favorite thing to do on the internet

All while turning the ball a total of 0 times. The man had a 37.9% usage rate, a total of 98 touches, and did not turn the ball over once. As a player that had something brutal like 20 turnovers in 4 games, that might be the most shocking stat of Tatum's entire night.

What I loved about watching Tatum's performance was the variety in which he found ways to score. In big moments what did we see him do? Attack the basket and finish at the rim. He got to the line (17 FTA), he hit big time clutch midrange jumpers, and when it came time for the dagger threes he was ready to knock those down as well. Tatum has become the very definition of a three level scorer and it's become beautiful to watch.

We are watching a player that has a chance to become one of the best players this franchise has ever seen. He's 23. Guy hasn't even scratched the surface of his prime and he's out here dropping an efficient 60. What a monster.

- It's not lost on me that in order to win this game, we had to see the Celts actually execute and come through in huge clutch moments time and time again. That has been something they've struggled with basically all year. In the last 3 minutes and OT, we saw them come through on 5 different occasions

Has there been another game this year in which we saw the Celts come through at least 5 separate times in clutch minutes with plays like that? This was a case where the Celts had to continue to find ways to execute time and time again. If one of those things didn't happen, they probably lose this game, and none of what we saw last night matters.

It shouldn't come as a surprise that a guy who knows he is going to get consistent run is able to find his rhythm as a shooter and suddenly is shooting the ball a whole lot better. But to be honest, the shooting from Nesmith is just icing on the cake. His energy and activity are what have truly helped this team over the last two games. Nesmith just makes shit happen. He's always around the ball, especially on the offensive glass, and we're seeing him display skills that weren't exactly there to start the year. Or at the very least he wasn't confident in doing them just yet.

You can tell he's starting to earn Brad's trust more and more because he played all the crunch time minutes. It's hard to keep him off the floor right now if we're being honest. This is why it's silly to call a rookie a bust in his first like 40 NBA games. Aaron Nesmith is good and is going to help this team, I am certain of it. Suddenly Ainge's 2020 draft doesn't look so bad now does it? Weird how that works.

- Great to see Rob back to doing Rob things with his 10/9/3 in his 23 minutes, and an even better job by Brad in terms of how he managed the rotation with him and Tristan, who was also fantastic

I think it's fair to say that ever since returning from his covid protocol issues, Tristan Thompson has been the version of the guy we all hoped for when they first signed him. The thinned out frontcourt helps, everyone having their established roles help, and Thompson continues to be a huge asset for this team with his offensive rebounding. Of his 15 boards last night, 8 were on the offensive glass. The Celts had a total of 27 2nd chance points, something tells me that's related.

- The Celts scored 80 points in the second half. The last time they did that I was 4 years old.

- Part of how the Celts were even able to come back in this game had a lot to do with Brad's second half adjustments. How they handled Poetl when guarding the switch which allowed Jaylen to be the player guarding the Spurs ball handler, most often DeRozan/Murray and that was big because whatever they were doing in the first half was not working.

With this switch, Murray went 1-8 in the second half and DeRozan 2-9. Finding a way to limit their guards coming off screens was a huge reason they were able to claw their way back into this game.

- Just watch Tatum's 60 again. Why the hell not

- As you can imagine, in a game they once trailed by 32, there's a lot of bad to choose from. Let's begin with how this game started. I think we can all agree that as we enter this final strech of the season, all of these games are incredibly important. So it's a little concerning that we are still seeing this team come out with no life and generally not look ready to play. What I fear is that this comeback will give them the idea that they can always do shit like this.

No, you can't and you won't. This was very much the exception and not the rule. NBA teams don't blow 32 point leads on the regular. So while I can enjoy the comeback as a fan, I also need to always be thinking about the big picture and it makes me a little uneasy that with the entire world knowing how big these games are that we're still seeing shit like this to start games

What's funny here is that it was Jayson Tatum who was the only one providing offense because he generally starts slow in the first quarter. But these prolonged stretches of not moving the ball, not scoring, turning it over, and then doing everything but getting stops on the other end cannot continue to happen. I'm not saying you need to be perfect, but you can't have these disaster starts which feel like they are happening way too frequently.

- I thought their individual defense on Dejounte Murray was pretty terrible to start this game. They let him get into his midrange jumper early, he knocked his first few down, and there was no adjustment. Bad idea considering it allowed him to get off to a 9-9 start. It came from a few people too. Smart had his issues with it early, Evan Fournier game up a team high 7 points on 3-3 shooting against Murray so he wasn't really doing shit either.

As we know, when the perimeter defense allows dribble penetration like this, the defense struggles. It forces them to rotate more frequently which gives a team like the Spurs, who know how to pass the ball, all the advantage. That's how you see a 71% shooting first half. They were hitting shots, but there also was no real resistance defensively. One or two passes and the Spurs had an in rhythm open look. Of course those are going to drop

- How about the balls of that official to not give Jayson Tatum continuation at the end so he would pass Larry Bird? On a play that was very clearly continuation? What an asshole that guy is.

- Rough offensive night for Jaylen at 5-24 (4-12) but he hit the dagger and has been generally fucking awesome so I'm whatever about it. He had 3 steals and 2 blocks and was obviously engaged, he just couldn't buy a bucket until the team desperately needed him to make a shot.

I will say his start was rather confusing though. Lotta missed layups/floaters that generally we see Jaylen make. One of those nights I suppose, glad it's out of his system.

- The Celtics entered the half with only 1 starter making more than one shot, and 3 of the 5 did not make a single basket. In an entire half.

- I do wonder how a game like this might impact their legs with a gigantic game against POR tomorrow night. They've started to play well again, Dame is Dame, and as awesome as the comeback was, I hope it didn't come at a cost.

All in all, a wild fucking night. History was made, we felt every emotion under the sun, and somehow they pulled it off. Good win, but it's time to focus on the path ahead. The Heat are probably going to find ways to keep winning, the Hawks have opened the door and the Knicks are about to have a 6 game West Coast trip. The Celts found a way to keep their path alive, but now they have to find a way to continue to move forward.