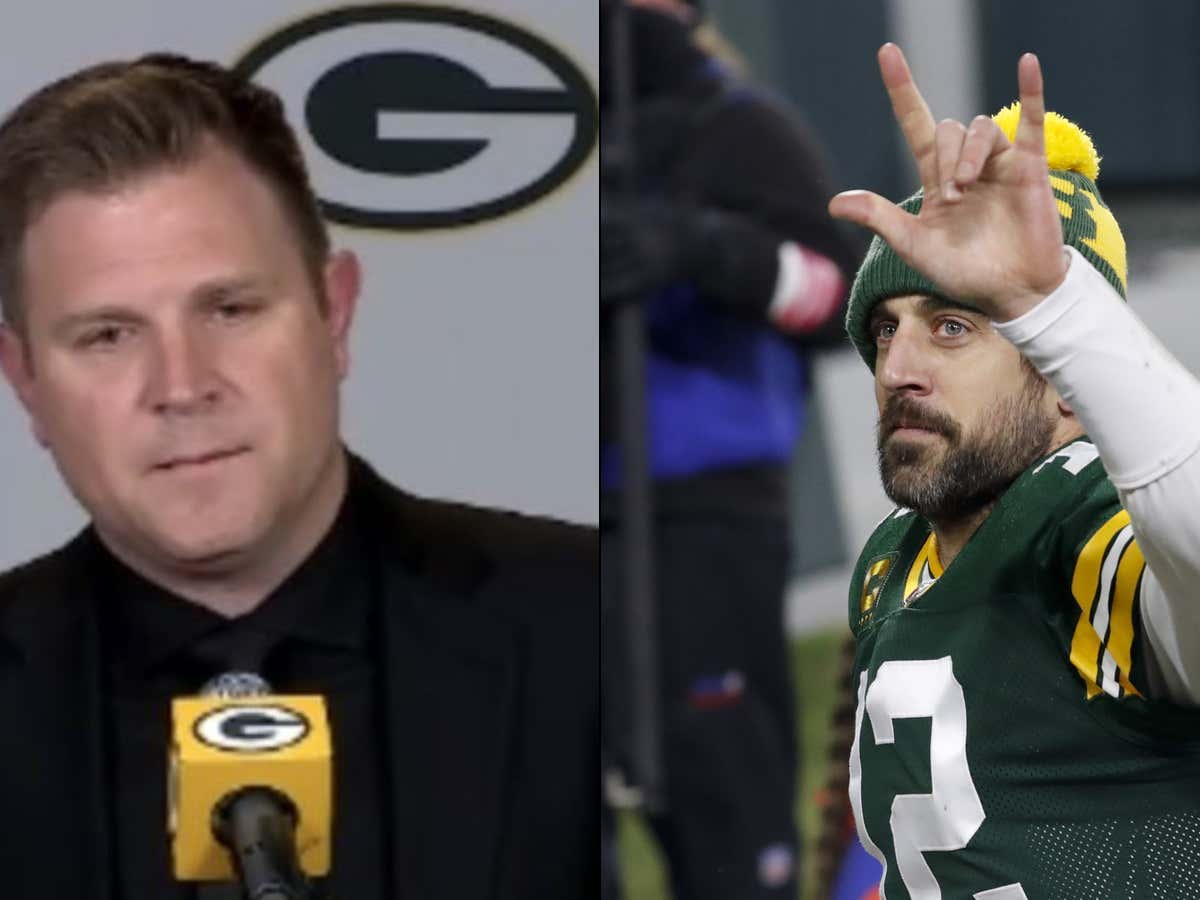 I am already sick of this Aaron Rodgers trade drama and can already feel it being dragged out well into the summer. Rodgers hates these guys, and has seemingly planned this move ever since they went behind his back and traded up to take Jordan Love in last year's draft. We know Rodgers is an intelligent, calculated, vengeful fella who knows exactly what he's saying and doing at all times. As he entered this offseason he called his future in Green Bay a "beautiful mystery."

We know he wants out, he's told people within the organization he wants out, including teammates. Which teammates, I'm not too sure because MVS seemed to be out of the loop when shit hit the fan yesterday.

After the draft concluded last night and the Packers used their 1st round pick on a Georgia cornerback by the name of Eric Stokes (I like this pick), Green Bay GM Brian Gutekunst addressed the media in an all black suit and tie to reiterate the plan to everyone: they are not trading Aaron Rodgers.

Now I mean right then and there what do you expect him to say? He can't say anything other than that in the moment, but in reality the two sides are at an impasse just waiting for the other to blink. On one end, Rodgers does not want to play for this team again, at least assuming all of these reports saying the same thing are true. On the other, the Packers do not want to trade their reigning MVP.

Rodgers is under contract with guaranteed money for only next season and then Green Bay could get out of the deal if they wanted to. Cap wise, it does the team no good to deal him right now. The dead money puts them in cap hell if they traded him this second. If they want until after June 1 to trade him they can offset some dead money and save somewhere around $16 million. Rodgers really doesn't have much leverage here other than being an all world reigning MVP who is trying to get his way for a change. You see NBA guys try to do this all the time, but how often has this worked in the NFL? DeShaun Watson I guess tried to force his way out of Houston and then….well yeah.

So what's next here? We know Aaron is going to the Kentucky Derby this weekend and could very well have a run-in with Dave.

Who knows what is going to happen there. After that I'm expecting this to drag out for a while. If he was going to be traded in the immediate it was going to be to Denver last night and include the number 9 overall pick along with other assets. Now the Broncos didn't draft a QB. Did they pass on a guy like Justin Fields because they believe they can get Rodgers? Or did they simply not love Justin Fields? Could all of this be a fake rumor leaked by the Bears so Fields would fall into their lap? Could be! It's worth noting Rodgers' fiancée Shailene Woodley lives in Boulder so that could play a factor in all this.

I truly don't know what's going to happen. With the way the CBA is, Rodgers doesn't have many cards to play aside from retirement. Him holding out or sitting out does nothing to advance years on his deal and get him out of Green Bay any sooner. I guess he could try the NBA rout of trying to manifest his way out of there, but if Gute is going to hold strong we could go nowhere for a while.

I personally cannot see him in Green Bay as their QB in Week 1. How is what's happening right now lead us there? Seems impossible right? Rodgers isn't one to go back on his word like this in my mind. I would guess Denver or San Francisco is the endgame here.