With the NFL Draft beginning tonight, I wanted to provide my Draft knowledge to hopefully help your sports betting. Last year I went 7-3 in my 1st Round props, so pay attention. And be sure to tune in tonight with the Energetic, Efficient, & Elegant (En Eff El for short) Draft Coverage starting at 8pm EDT. 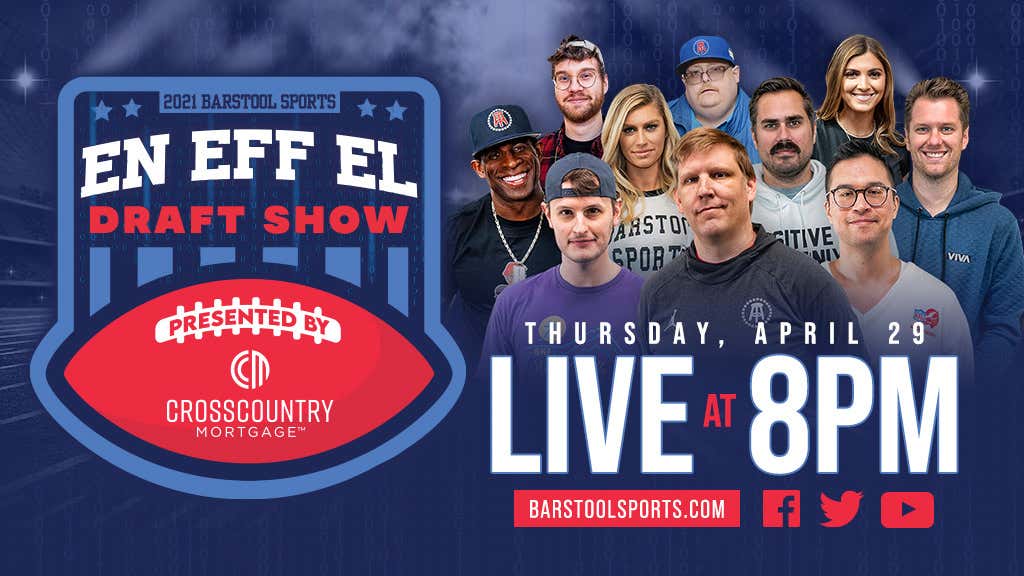 +375. It's going to be an Offense-heavy 1st round and especially in the Top 10. But when you look at the playmakers on the Defensive side of the ball, Parsons is atop that list. He also is exactly the type of player new Lions HC Dan Campbell talks about when he's describing guys that'll bite your kneecap off. Denver also has interest if they stay put at #9 and don't go QB.

Player to be Drafted in the Top 10: Jaycee Horn

+100. The Panthers and Cowboys are both teams in need of a Cornerback and it's hard to argue with my subconscious.

Player to be Drafted First: DeVonta Smith or Jaylen Waddle

DeVonta Smith +160. It's a really close call and varies from team to team, I just think Smith has more fits and therefore makes himself available to more teams. Just outside the top 10 ;)

-125. This is always confusing because EDGE rushers are a muddy category. But Azeez Ojulari is classified as an OLB and Jaelen Phillips is his main competition. This is more a bet against Phillips who has a ton of red flags after medically retiring from football after three concussions at UCLA and trying to pursue a music career. He's uber talented but not the type of guy who should be picked first among all Defensive Lineman.

Total Runningbacks Drafted in the 1st Round: Over/Under 1.5

OVER +125. Najee Harris seems in pencil to the Steelers at the moment, but Travis Etienne is supposed to go tonight to and some teams even like Javonte "Pookie" Williams over Harris, so there could be up to three. Don't think it'll happen, but I feel like over 1.5 is a good play.

Total Offensive Lineman Drafted in the 1st Round: Over/Under 6.5

UNDER -125. So we've got Penei Sewell, Rashawn Slater, Alijah Vera-Tucker as locks. Then I'm pretty confident Christian Darrisaw and Teven Jenkins go. After that? Landon Dickerson certainly is a possibility as is Dillon Radunz. Jalen Mayfield's stock is on the decline. Quinn Meinerz has a shot, but I spoke with him yesterday and he said that the most interested teams in him were Miami, Carolina, and Philadelphia which not bottom of Day 1 teams. So I'll say a fairly healthy under for this one.

Total Safeties Drafted in the 1st Round: Over/Under 0.5

UNDER +140. Trevon Moehrig really has the best chance to get picked tonight, but after the Jags and Browns acquired Safeties via Free Agency, it's not a pressing need for many teams in the back half of Round 1. Moehrig is really talented and the Jim Thorpe Award Winner for Top Defensive Back, but I still like the under here. Good value too.

Player to be Drafted in Round 1: Joe Tryon

Total Cornerbacks Drafted in the 1st Round: Over/Under 4.5

UNDER +120. We've got Patrick Surtain II and Jaycee Horn as locks. Caleb Farley was a lock until his back surgery and now has COVID on top of that. So we're looking for Farley and two more of these guys: Greg Newsome II, Asante Samuel Jr., Eric Stokes, Tyson Campbell, and Kelvin Joseph to get taken tonight? I'm going the under as I've heard murmurs that Farley could even fall out fo the 1st due to health concerns, so I like under 4.5 Cornerbacks getting jobs tonight.

OVER 10.5 -136. This is only for people in Illinois, but we have this lovely prop in the Barstool Sportsbook. You already know which way I'm rolling. 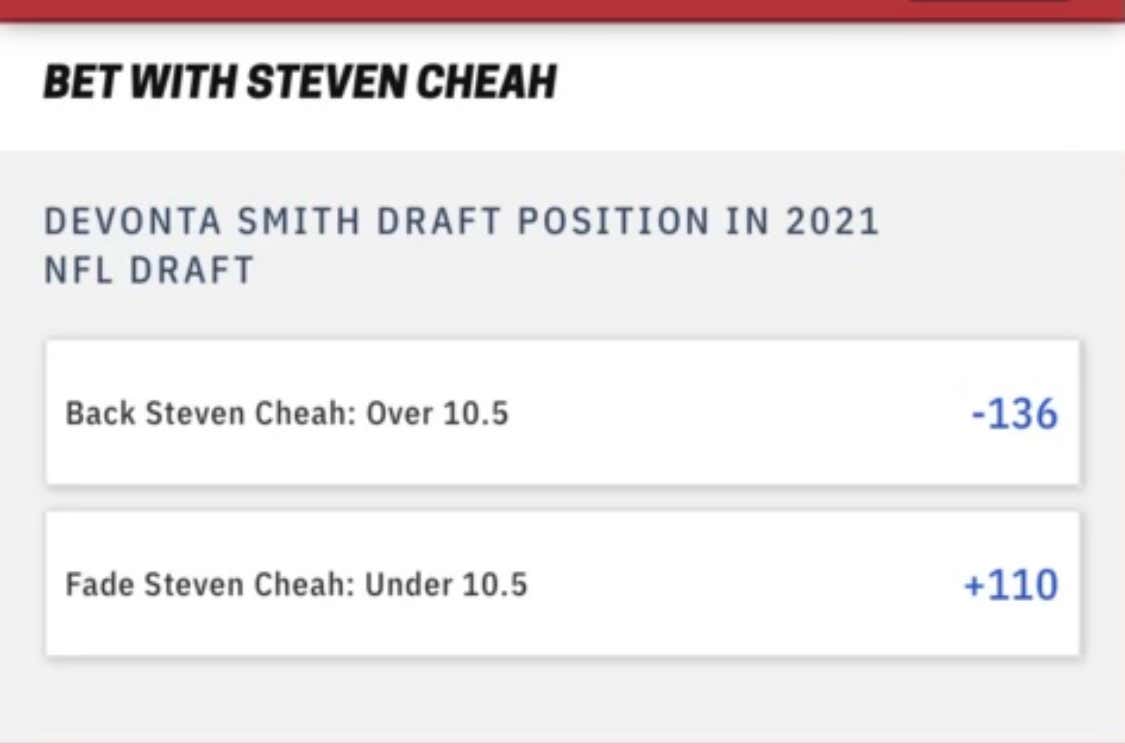 See you all later tonight for the En Eff El Draft! Coverage starts at 8pm. 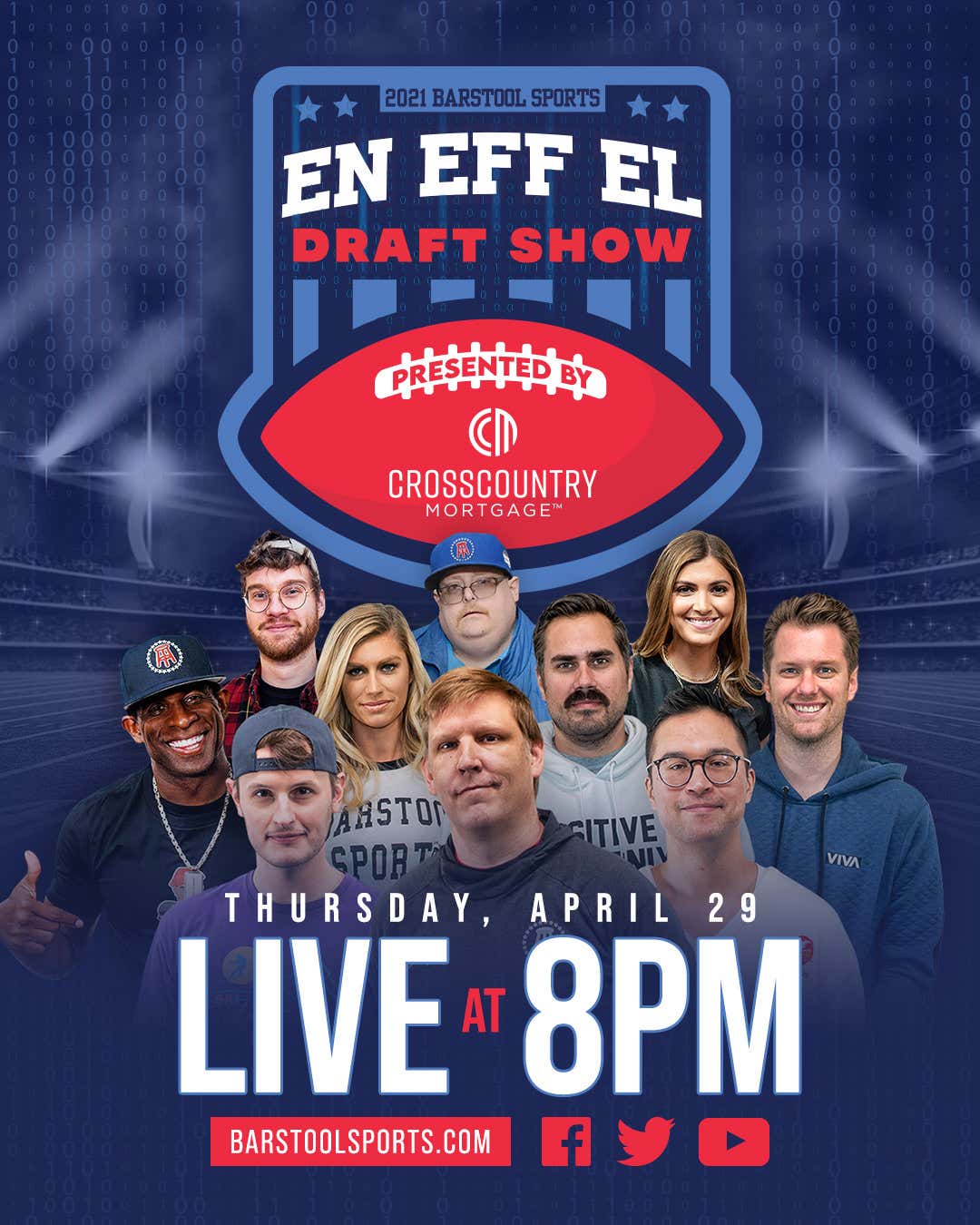