Last night I was grinding some tape, prepping for the first round of the NFL Draft tomorrow night. No, I wasn't watching 10 minute highlight reels of prospects in this coming Draft, I'm not an asshole. I was, of course, watching the entire first round of the 1998 Draft. Those who do not learn the lessons of the past are doomed to repeat its failings in the future. Truth be told, my original plan for this blog was just to post the full first round a la Carl when he posts an entire movie, one my favorite ongoing bits any blogger on this website has in his or her arsenal. But as I kept watching, I noticed that ESPN was going out of its way to talk about Randy Moss, and really ONLY Randy Moss, for the entirety of the draft. Which I understand in the sense that Randy Moss is one of my favorite football players of all time and I'd argue he should be the main point of conversation in most drafts, football or otherwise.

But to fully contextualize how ridiculous it was to focus solely on Moss, especially as negatively as ESPN did, is to remember the chaos that was the 1998 Draft. Peyton Manning went first overall, there was a fake debate about whether or not he or Ryan Leaf should be that selection. Then the Cardinals, who originally held the second overall pick, pulled a John Lynch and duped the San Diego Chargers into trading up for Leaf. It's so identical to the 49ers-Bears-Trubisky situation that even the defensive end the Cardinals ended up selecting stunk out loud. Charles Woodson, one of the greatest defensive backs of all time, went fourth. And he didn't even want to go fourth. In fact, the Raiders were begging the Patriots to come up and take him for the price of New England's two first round picks. I have not stopped thinking about how Woodson and Ty Law would have dominated in tandem for a decade since I learned this information. I can't complain too much, things worked out in the long run, but still. Curtis Enis was the next big prize. A running back... in the first round... in the top five??? Abhorrent. Disgusting. Putrid. Worst of all, Fred Taylor was still on the board when the Bears selected Enis fifth overall. Then you get into the teens; Keith Brooking and Takeo Spikes go back-to-back, Green Bay snatches up Vonnie Holliday, and the first wide receiver is taken off the board: Kevin Dyson to the Tennessee Titans.

It is not a Monday Morning Quarterback, 20/20 hindsight take to say that Randy Moss was obviously better than Kevin Dyson. No disrespect to the Dice Man, but we're talking about Randy Gene Moss, the pride of Rand, West Virginia. The way every analyst and coach (sans Ditka) spoke about Moss, I'm surprised he was drafted at all. That is, until he was finally drafted 21st overall to the Minnesota Vikings. There's a shift in tone that happens almost instantly, where they focus in on the football player that got selected in the football draft. Weird. You'd have thought Randy Moss killed a man every morning the way they spoke about his character concerns. They show the three "incidents" that were causing Moss' stock to plummet. Those incidents were: beating up a racist in high school, smoking weed while on probation for beating up said racist, and a domestic incident where the charges were dropped. Call me old fashioned, but two of those three are pros in my book, far from cons. The third, however, is a big con. There's no arguing that. A con worth doing a lot of homework towards. Why were the charges dropped, what happened that night, has a restraining order been filed, is this repeat behavior, and about 200 more questions. If we can be honest, I imagine the NFL in 1998 was more concerned with a player constantly getting suspended for negative drug tests and not being able to play. You can see how Peyton's alleged misconduct at Tennessee wasn't some negative they harped on. But from the opening of the '98 Draft through his selection, in between every other pick, to legitimately lead off the same night one of the best QB prospects of all time was to be selected first overall, they mostly talked negatively about the character of a man they now employ. Funny how life works out. 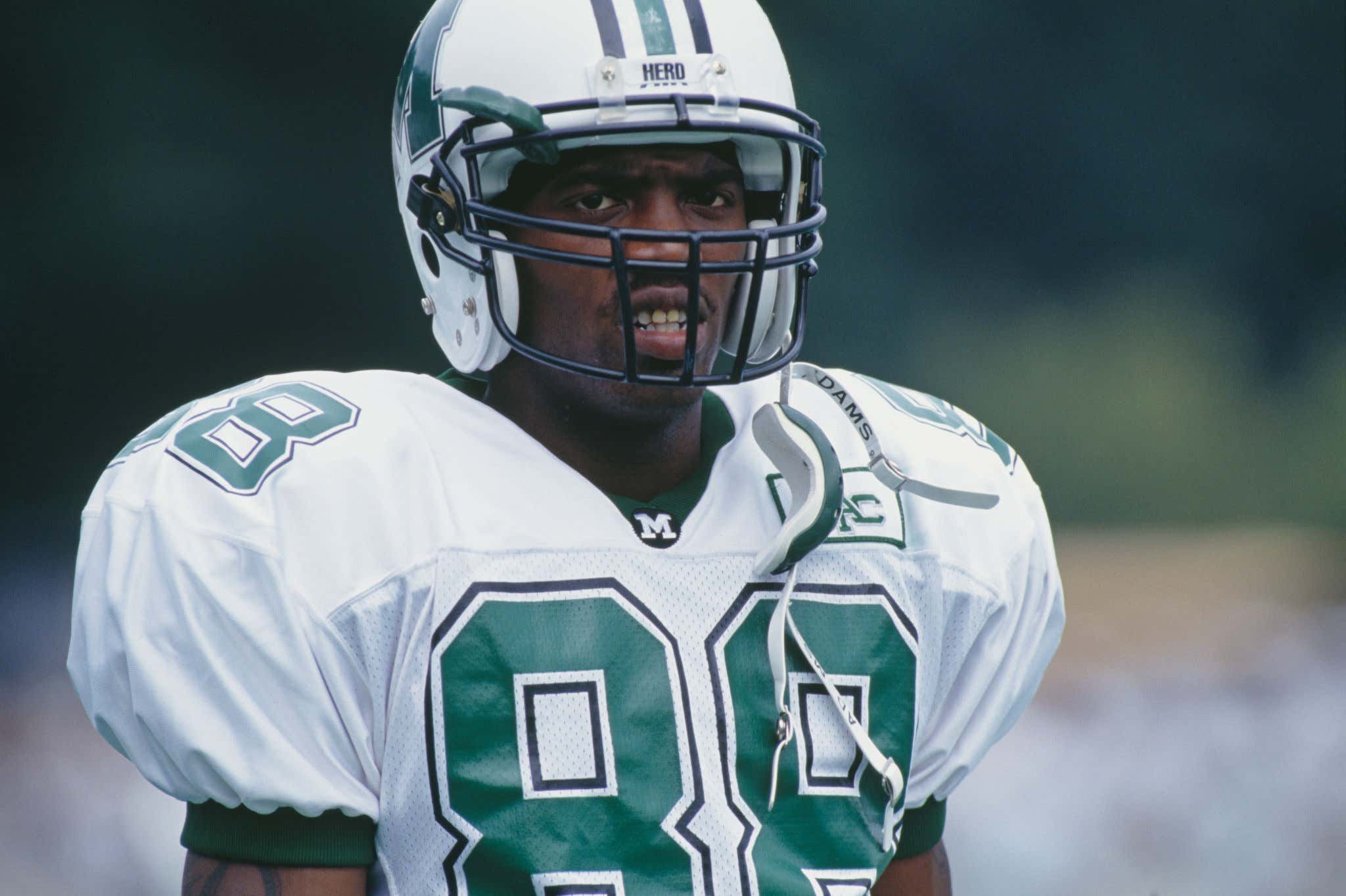 Truthfully, you couldn't talk about Randy Moss in 1998 without mentioning his past. Man was supposed to go to Notre Dame and actually made it to Florida State back when that was a big deal. People deserve to know why this all world talent was coming out of Marshall instead of a blue blood program. So I get it, I think they made it a bigger story than need be, but I get it. You can see where the World Wide Leader has expanded upon the, uh, "human interest" side of the Draft in recent years. Now if something terrible DIDN'T happen to a close relative you have no shot at going in the first round. But the thing that bothers me most about how they talked about, again, RANDY MOSS, was the player on the field. They would show his stats, put a footnote at the bottom of the stats about how the stats you were viewing were actually all time records, and then turn around and say he's uncoachable, that he couldn't run routes properly, that corners at the next level would be able to push him off the line and get him off his route.

This is where you have to be able to separate what you see from what you hear. Linda Cohn went down to West Virginia to interview his teammates, his coaches, the people who had actually spoken to Randy Moss once in their lives. How is a man uncoachable while his coach is saying he's extremely coachable? Where does that storyline even come from other than to create a false narrative? The smartest person in this entire 14-minute video is Jerrald Long, Moss' teammate at Marshall. He compares Moss falling in the Draft to Michael Jordan falling to the third overall pick "a few years ago." Even in 1998, the 1984 NBA Draft was very much not "a few years ago." But, that's not the point. The point is we should all be so lucky to have a friend like Jerrald. A true hype man. "Yeah you might get Hakeem, I'd rather have Michael. That's just me though." You hear his coaches and teammates talk about the character, the man, the player in the exact opposite way it has been spun to you all night long. But they made sure to play Andrea Kremer's piece from an unnamed psychologist directly before hand. Huh. Peculiar.

It's the Draft, you're supposed to have #takes, that's how this works. They show Moss torching Ole Miss on the opening play of the game for the easiest touchdown you'll ever see, then bring up that he played against lesser competition. Bro, Kevin Dyson played at fucking UTAH. This isn't middle school vs. varsity we're talking about here. All the records Moss broke at the 1-AA level belonged to literally Jerry Rice how many times do we have to learn these lessons? He didn't get kicked out of FSU because he wasn't good enough on the field.

Tomorrow night certain players will begin to slide for one reason or another. Watch how they scramble to find a reason, any reason, to explain it. There's a real reason, they just wont say it. That being, of course, that a lot of these teams are - in the eternal words of Frank Flemming - incompetent. Lotta bozos making decisions for multimillion dollar corporations tomorrow night. Dick Vermeil said Moss had a first round grade and he would not take him in the first round. You've got analysts in 2021 saying the Ravens, a non-bozo organization, should draft a quarterback strictly for cap gaming purposes. Not because they think you'd upgrade the position. Just to finagle the cap, a thing built to be easily finagle-able as proven time and time again.

Watch with your eyes. Kiper not having Moss in his top 12 was absurd. He wasn't talking projected picks, those were players he ranked on their football abilities and Dyson made that list. Moss was a goddamn Heisman finalist along with three of the top four picks and that wasn't brought up even by accident. How are you going to have so many preproduction meetings about the amount of different Randy Moss segments you're going to run and then say he's not one of the TWELVE best players coming out? If Marshall's competition was so mediocre then why was Chad Pennington his top ranked QB of the 2000 Draft class? I'm not here to pick apart 21-year old player rankings but that kind of inconsistency has little to do with the times and more to do with the intent.

When someone inevitably begins to "slide" tomorrow night, listen to how they pivot. Then watch the player when his name gets called. They wont always show the same story.