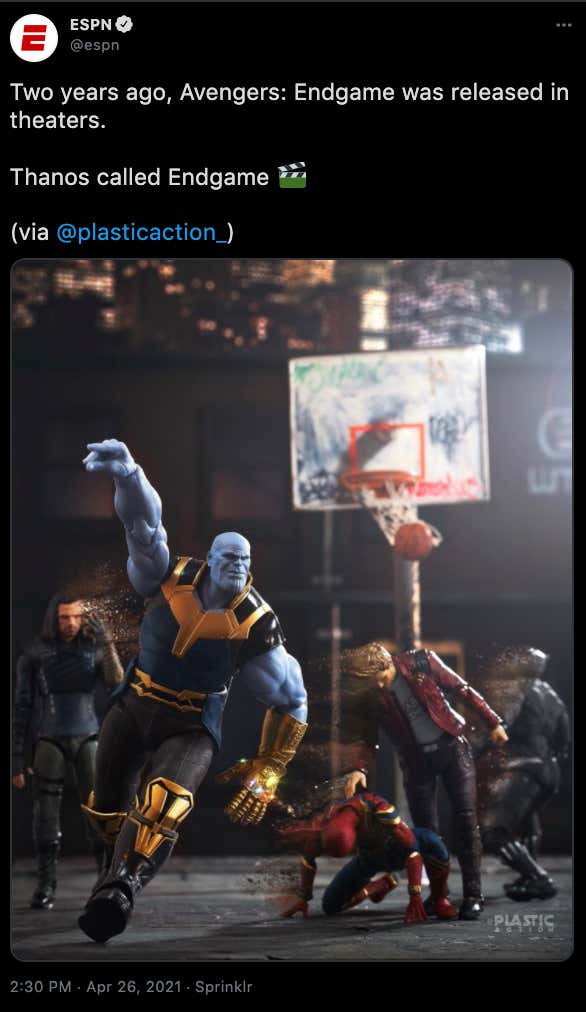 ESPN probably has some robot-man heading up their social media department that really took the last all-hands really to heart. Disney (Which owns both ESPN and Marvel, obviously) CEO Bob Chapek probably made a note like "We need brand synergy whenever one of us has a major achievement!". Skip forward to today, and the robot man sees that everyones talking Endgame, so he commands his minions to DO THE TWEET. The problem? Apparently nobody in the entire line of Social Media QC for them has seen the second highest grossing movie of all time.

If you've seen ENDGAME then you know the following:

1. The Snap did not happen in that movie

2. Thanos was not only killed in Endgame once, but TWICE! He got beheaded in the opening like, 20 minutes of the movie and DUSTED at the end of it! DOUBLE the loser! It's quite literally the opposite of this caption!

I feel bad for Plastic Action because they make cool shit and would never pick this caption. On the other hand, I am also now happy to add this tweet to the depository of Brands trying to be cool but fucking up bad.

Why did they make Patrick hustle back on D!?