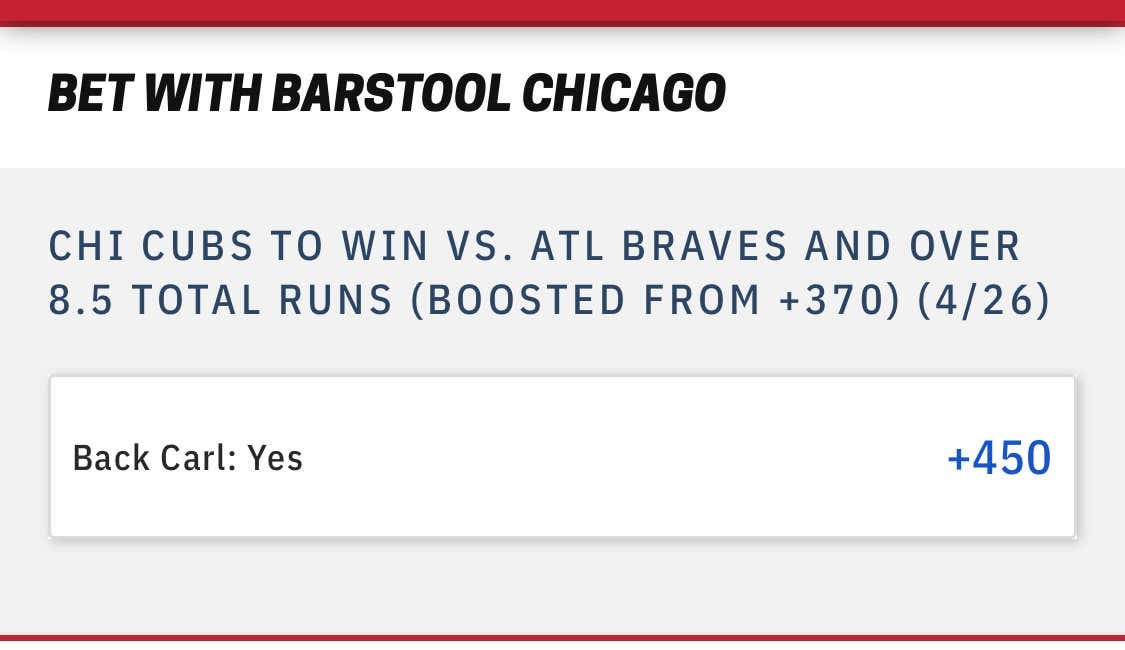 Gorgeous. Stunning. Delightful. Exactly what I want as the Cubs get out of the NL Central and hit the road to Atlanta tonight.

I don't have 1,000 words breaking down the intricacies that make me love this boost, but at a higher level we need to buy into some things:

- First, you can reasonably expect more blogging content about gambling because that's important. So while I'm not Jimmy fucking bag of Donuts here handicapping the board, I do know a thing or two about my team and it's entirely in my job responsibilities to share this knowledge. You can use it to fade me. You can use it to die with me. You can completely ignore it. But heavens to Betsy you're going to get it.

- The Cubs are coming off a decent home series against the Brewers while the national narrative continues to swirl that they're pathetic because they just lost 6-0. In reality, they were up 2-0 in the top of the 5th on Saturday looking like cruise control. Some bad bullpen work and a Brandon Woodruff dominant start later, it's a convincing series loss for the Cubs after winning 15-2 on Friday. So you know they're actually not playing bad at all right now.

- Lineup mix is starting to come together for the Cubs with Nico up and KB playing more time in the outfield. That means you can platoon better and add depth which should help when Morton is good for 5.1 innings. That means you expect the last 13-14 outs to come from a bullpen that's put a lot of guys on base. That means opportunities to score later coming off a series where the Brewers make it impossible to score in the 8th+. That's a good thing.

- Zach Davies probably gives up 3 earned tonight and even that would be progress. He'll get much better as the season goes just like Hendricks. But for now he's still finding his rhythm and going into Atlanta after a bad weekend isn't the best place to get it.

- So really then the question to me is can the Cubs win this game? Because if they can, it would have to go over. So while I already think +155 is good value, I'm willing to say +450 for it to go over is even better. I'm far from calling this a sure thing because the Braves are good, but I don't think the Cubs can win this game and go under. And I already like the Cubs in this game so let's just fuck it and say Cubs and the over.

- I'm not a licensed gambler. Just a guy who lives and breaths with the Cubs starting pitching. Take that for what it's worth.