This is a picture of me emailing Rick Hahn about 2 and a half years ago. Before we get into why, I want you bastards to ignore my eyeball beard and not make any comments on it. I trust you all have the ability to do that. I'm asking you cock suckers nicely.

Thank you. This picture was taken while I was in a dark place and the sight of it makes me want to jump off a cliff like a lemming.

Notice the date of the picture. It was September 7th of 2018 - the day the White Sox announced Michael Kopech tore his UCL in a start against the Tigers and would require Tommy John surgery. I say this without an ounce of embellishment - it was the worst day of my life. At the time, Giolito was the worst pitcher in baseball. Moncada had REALLY struggled in his short time in the show. Carlos Rodon was oft injured. Reynaldo Lopez looked better than any prospect they had acquired to that point, and even he didn't look that good.

It was brutal. All I give a shit about on this planet is the White Sox. Friends and family and all of that can kick rocks. Just give me a good, solid White Sox team and I'll be happy. If they stink, I won't be. It was a rough 10 year stretch for me, as you'd imagine.

The timing of the injury was the worst part, too. Tommy John typically requires a year of rehab before a pitcher is able to throw at full strength again, and even then there's a long build up after that to be able to start a full season. With Kopech's injury happening in September of 2018, there was effectively no reason for him to pitch in 2019. "Just get him ready to start in 2020" was their thinking, and nobody could disagree with it, including Kopech himself.

Then this goddamn cock sucking mother fucking pandemic went down and Kopech decided to opt out of the 2020 season:

I understood it. At the time of him opting out we didn't know dick about the pandemic still and from a financial standpoint, it made sense to him. If I were his agent I would have instructed him to sit the season out too. But that also meant it would be 2.5 years between big league starts and that, to put it simply, sucks.

But he's back and hoooooooo boy does he look every bit of what the White Sox hoped they had traded for. I like to use the term "fuck you fastball" to describe a fastball that every single person in the stadium knows is coming. "Fuck you, try to hit it". That's what Michael Kopech has done with regularity thus far:

The ball just looks different out of his hands. There are plenty of pitchers who throw upper 90s, but the perceived velocity of Kopech's 98MPH juice is different than most others. You've heard me say this 1 million times, but not all fastballs are created equal. Some 98MPH fastballs like 95; others look 102 and Kopech's is the latter. His fastball has so much life and Baseball nerds have started to try to quantify that by measuring pitchers' spin rate. As you'd imagine, Kopech's spin rate is elite: 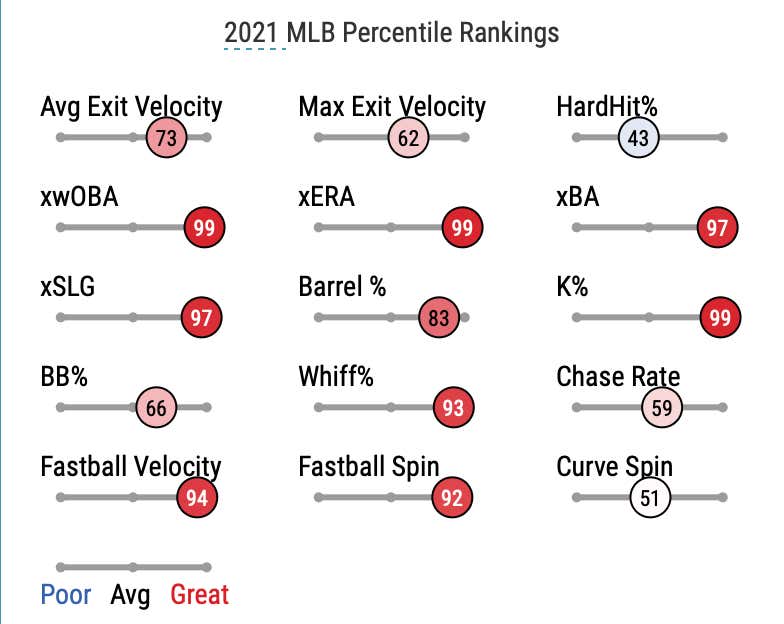 But the command of his fastball has been remarkable too, all things considered. As a prospect, Kopech was one of those "if he learns how to command the zone, he could be an ace" type pitchers. Well he's done that. As a mechanics nut myself, Kopech's delivery is as mechanically sound as it gets. Now, being such a young pitcher he does tend to lose them from time to time, but he's so athletic that he quickly finds them when they do start to leak on him.

His A+ shit paired with his great command of 3 pitches has lead to this stat line thus far:

And if you're a "peripheral" nerd, his underlying stats suggest that these numbers are here to stay:

The dude looks like the freak that we hoped we traded for. Sure, it was a shitty path to get to where he is now with the 2.5 year layoff, but at this point it's already safe to say he was WELL worth the wait. Thank fucking CHRIST Hahn didn't listen to any of the fans clamoring for Kopech to get dealt at any point of the last few offseasons.

The only question left about Kopech is this: when do they take him out of his swing man role and make him a permanent fixture in the rotation?

Oddly enough, most people seemed to be in agreement - keep him in his current role in spite of how incredible he looks and how much our hearts tell us we want him in the rotation, let Katz and Cease keep working together, and come July if it still hasn't clicked for Cease, unleash Kopech as a starter. We all give the White Sox a lot of shit, but I think the majority of people would agree that they're handling Kopech perfectly right now.

Best case scenario is this - Cease clicks, Rodon keeps doing what he's doing now, and Gio/Lynn/Keuchel stay healthy. I'm of the opinion that competition breeds success; Dylan Cease knows Kopech is breathing down his neck. Hopefully he works out his command issues and he's pitching so well that the Sox don't have to flip flop their roles. That would be an AWESOME problem to have. Everyone expects the White Sox to be playing baseball in October, and if you have Gio/Kopech/Lynn/Cease/Keuchel all pitching at or near their top of their game, that's a problem for opposing line ups, a big BIG problem.

Nevertheless, Kopech looks incredible. If he proves he can do this over the course of 175+ innings year over year, he has a $300MM arm. I say that without embellishment. Outside of Chris Sale, he's got the best pure "shit" I've ever seen from a pitcher on the White Sox and if you're a baseball fan, you should be watching him as much as possible. It's a real pleasure. Dude is just now tapping into that all world ceiling and could very well be a Cy Young candidate for years to come. I don't care that I'm basing that off a 20ish game sample; my eyes tell me he could and should be that good.

Let's get 5 in a row tonight. Gio's going to rebound and shove.