There's been a measurable influx of dumb videos from Wrigley this year and rightfully so. It's been a good hard 18 months and we've waited eagerly for the opportunity to get ear infections from the Deuces pool water. Without being dramatic I think a trip to Wrigley is in a lot of people's top 5 things to do coming out of COVID this year. So many annual pilgrimages have been delayed to this season. So much day drinking debauchery has been put on hold. You can only naturally expect for the crowds to be unruly and obnoxious. And fortunately because we're Cubs fans, you can also bank on it being completely harmless.

Jumping In The Pool At Deuces: no shit. This is why we're here in the first place. It's a shallow pool and they don't keep the water warm or chemically treated. Take that for what it is. But higher level just keep it simple and think about the impact of wet socks in Wrigleyville. The thought of that makes me want to crawl into a hole and die. Obviously it's an inconvenience to cannonball and get kicked out and fire up the security staff. But news flash bro you are sopping around Clark street at a very breezy 51 degrees and I don't think it gets worse.

Bunting at Sluggers: Let's keep being stupid. Let's go to sluggers and work on push bunts to 2nd base without any consideration for the inconsistencies from the very fast machine. Even if it's 78mph, you're 14 drinks into the afternoon and that yellow ball is in fact wobbling. The warm sensation you now feel on your hands is the blood from your now destroyed thumb. The combination of alcohol and cold temperatures mean you're bleeding out pretty bad. Your buddy goes to the bathroom to get some towels for the clean up. He pays the attendant $2 for a wad of the brown bathroom paper towels that just move the blood around, absorbing very little. Your other buddy snags a damp towel from the bar that's been used to clean the shot rack. You pass on urgent care to keep the day going. Later, on Thursday, you lose a thumb nail. It is not a fair trade off because bunting is for pussies. Take some big hacks or get out of the cages.

Pissing in the Murphy's Bleacher's Alley: We're being stupid so let's go smoke a cig in the alley behind Murphy's (not stupid) and take a piss on the wall next to the dumpster (very stupid). Takes so much to get kicked out of a Wrigley bar and this is one of the few traps lurking. You'd have to be a complete savage to be in this mindset pre-game so most of this commentary is post-game. You might be tempted but just don't do it. Your buddies don't want to have to relocate because you wanted to squeeze out a leak while talking to some strangers. You guys can call me a pussy for putting this on the list but scout's honor I think it's a bonafide risk that so many people overlook. Smoke that cig and go back inside.

Hanging out at Sports Corner: Another trap is just going to Sports Corner after the game and I mean that generally. Just being there. Place can suck you up so easily if you don't pay attention because it's so close without any of the action or crowd. You're so tempted. It's RIGHT THERE. Even so, keep it moving guys. Hard to imagine a bar with nothing going after the games but Sports Corner manages it. Pregame is a different story to me. Underrated pregame spot where you can post up for a big chunk so close to the stadium. And I've also been guilty of leaving games in the 8th inning to watch the remainder in Sports Corner. That's more of a good luck thing. But if it's an hour after the game and you're still hanging at Sports Corner, you need to get the show on the road. There's a whole world waiting for you, no disrespect.

Bottle Service at Moe's: To be clear, the world waiting for you does not include bottle service at Moe's Cantina. I know it sounds convenient and that's coming from a guy who lived through the Moe's craze of the early 2010's. But trust me when I say the last thing you need is a liter of Svedka at a 1400% markup just so you can sit in one of the handful of their legitimate tables. If you find yourself in this position, you're probably visiting with a bunch of dudes. You guys might have had some great bottle service nights in your history Vegas and Scottsdale. Maybe even got crazy at Tao on Friday night when you guys first got to Chicago. But I can unfortunately assure you this is where it ends. Do not chase that feeling on Clark street or you will be severely disappointed.

Being These Guys: Self explanatory but just circling back on the hardcore sex custom jersey conversation:

Fishing (Bowls) At Merkle's: I'm actually a huge Merkle's guy. It's always empty and the food is good and you get served right away. It's on a short list of places I like watching games at when I'm out with a close friend. If you just want to sit and watch the game and hang out and not really deal with the chaos while still being amidst the chaos, this is the spot. Even if that sounds like an absurd paradox. Merkle's has it's place and I enjoy it quite a bit. Only problem is they run one of these machines: 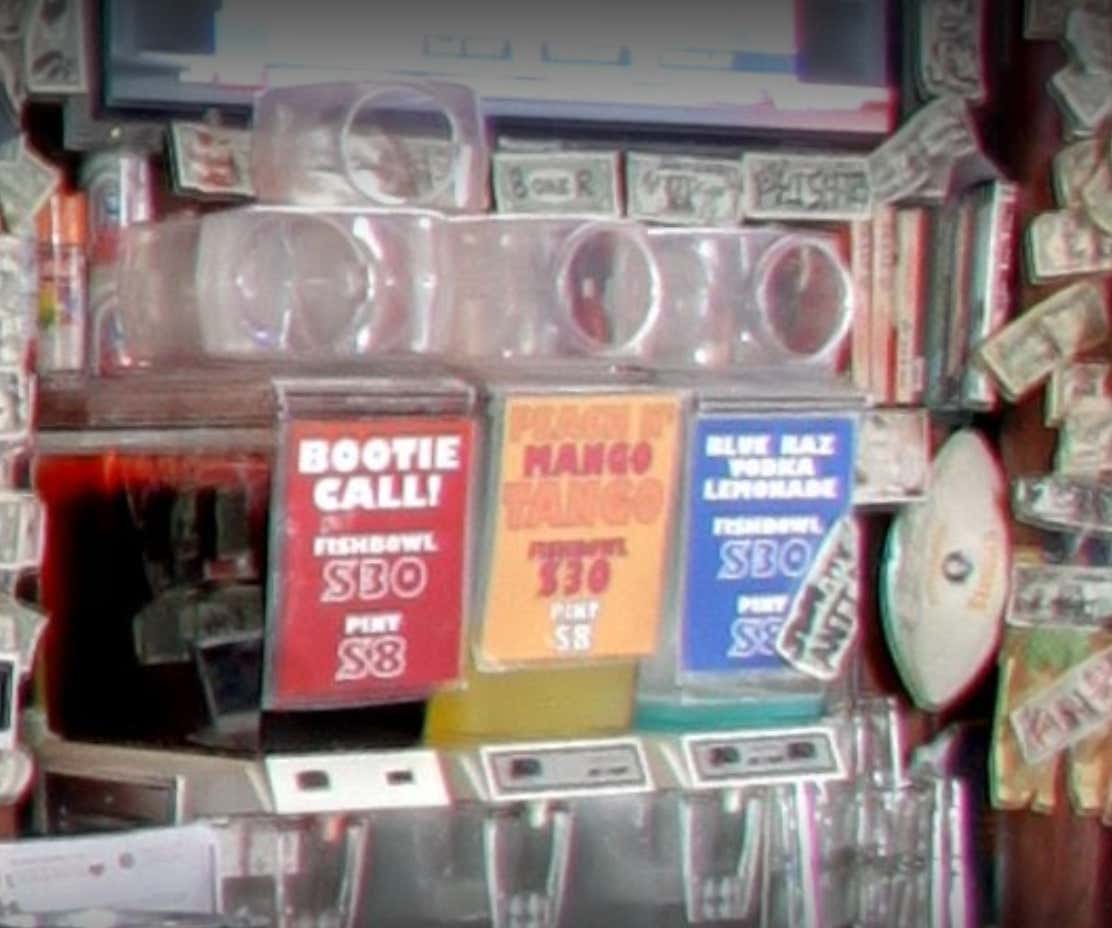 And you see right there: $30 fishbowls. That thing just hums in the background all day. It's so tempting to get weird and fire one of them up because Merkle's does a very tasteful fishbowl. But just trust me on this one guys you can do Merkle's without the damage. (Unless you're going for the 1st time, then obviously you need to try it just so you know the pain I'm talking about.)

Waiting In Line Anywhere: Not to be mean to more popular places but waiting in line in Wrigleyville is for suckers. There's so many bars that you have to be a complete fraud to want to wait and pay cover. That's not the point. Don't fall into the trap of moving in groups of 10-15 that make decisions based on where you can do a good instagram post. Obviously theres a time and place for that kinda stuff but it's not after a Cubs game. My best advice is to just go to as many places as possible and bounce around and start keeping track of what you like and don't like. Very often I get - "making my first trip… where's the spot?" like there's a clear cut answer? No sir(s). There's no answer. Just roll up your sleeves and get to work. There's literally no time to wait.

What did I miss?