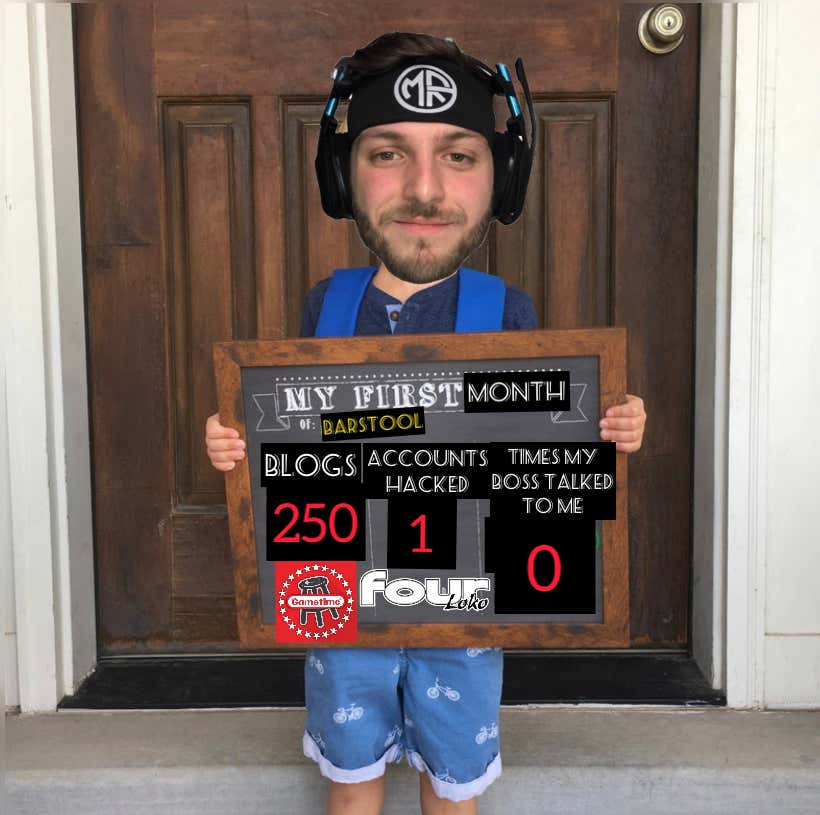 May 19th marked my first month at Barstool Sports and it has been a very fun time to say the least. I can't express enough how lucky I am to have been given this opportunity to work full-time while pursuing my passion. In my introductory blog, I dove into my interest in gaming and how I began streaming, but this blog I want to take a step back and explain the sheer grind it took me to get in front of Erika and Gaz for an interview.

If you want to see my introductory blog, click below.

Like everybody in the world, the pandemic really shifted my entire life. At the time, I was working in Finance at a top wealth management firm in downtown NYC. I was living in Westchester, NY and commuting a little over an hour and half each way, 5x per week. I enjoyed the role and my company, but it was simply a job that could've transitioned into a career, but wasn't something I went to bed at night dreaming about. This was my first job out college when I graduated from Fairfield University in 2018 (I began working there in June of 2018).

When covid initially hit, I was very nervous for the safety of myself and my family. On the other hand, I really enjoyed being able to save 3+ hours a day by not taking a train/subway into work. Couple this with the fact that Warzone just dropped, I finally had time to game again.

At this point, I hadn't streamed consistently since graduating college (about 2 full years) and I felt a little rusty. After gaming for a few weeks, I immediately felt that my gameplay was good enough to bring it back to Twitch.tv/MRagsTV. On Saturday, March 21st, I fired up the stream for 6+ hours to an average of 3.4 viewers, with 3 subscribers and roughly 1600+ followers.

From the first stream and through April, I only missed two days of streaming over those 41 days and streamed for 160 hours (roughly 4 hours/day) while working a full time job. The stream was starting to pick up a little steam and by the end of April, I was averaging 7 viewers/stream.

It may not always appear this way, but I'm an individual that really thinks in depth about the future, whether good or bad - Career path, my family's future, my goals and aspirations, etc. During this same time, I also recognized that this was truly the last chance I would ever have to pursue my dream of creating gaming content for a living. Simultaneously. stimulus checks began to roll out and I made the decision to invest in myself. With the stimmy check, I purchased a streaming PC to significantly increase my stream quality and THANK GOD I made the jump (Massive shoutout to my boy MFans for pushing me in the right direction).

This YouTube video below is from my first stream on my PC and SHEEEESH this feels like 10 years ago.

If you aren't familiar, I only break out the tuxedo t-shirt for special occasions and this scenario absolutely called for it.

For those that may not to be familiar with PCs or streaming, think about it this way - instead of taking a picture with a Kodak disposable camera, I immediately went and got a professional camera. The quality upgrade is night and day.

I was still playing video games off my PS4, but the mic quality, webcam quality and overall viewership experience increased tenfold.

About a month later, I got the opportunity to play with Smitty and from there we got an (8) Win Streak on Warzone (full details can be found in the blog link at the top of this post).

At this point, I knew I was all-in on Twitch, MRagsTV, and Gametime (if given the chance). Like many things in life, the path is never as straightforward as you'd like it to be. I was affiliated with Barstool for over 9-10 months with no promise that it would lead to anywhere. But I just knew what I was doing was having a positive impact on others while I was pursuing my passion which was ALWAYS my biggest goal.

May and June were big months for growth and I began streaming to an average of 12 viewers over these 61 days. I only missed two days of streaming and streamed in total for 243 hours (10 full days).

From there, the grind resumed and never stopped. I completed a 24 hour stream and ended up pushing it to 26+ hours because I was enjoying it so much (we might have to try to beat this one day…). On top of my Warzone streams, we played Among Us, Who Wants To Be A Millionaire, Uno, Fortnite, Chess and so much more all with the community.

Not even considering the 4+ years I streamed prior to March 2020, this is how my Twitch stats shaped up for the year prior to receiving my offer to work at Barstool. 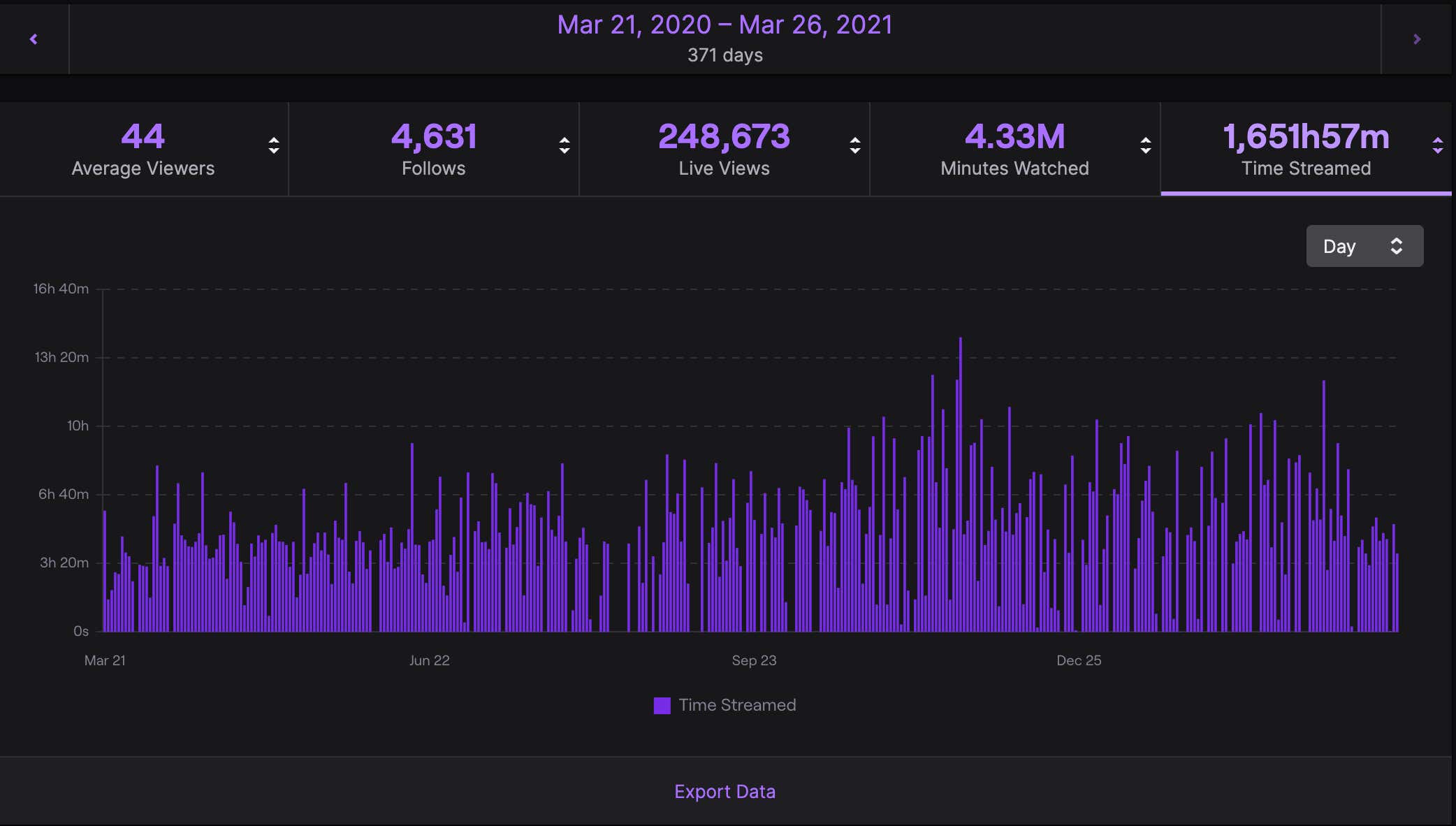 Let's do some quick Math, in 371 days I streamed for 1,652 hours (while working a full-time job) - that comes out to 68.83 FULL DAYS of streaming since March 21st, 2020 until my interview with Erika (end of March 2021). That's absurd. This time also doesn't account for the time I spent editing, recording YouTube videos, planning tournaments, casting Barstool's tournaments, recording and editing podcasts, blogging, etc. As you can tell, I live, breathe and slept my work with MRagsTV this past year and I wouldn't change it for anything. Put me back in that same scenario and I would do it all over again.

The story doesn't end on Twitch - In an attempt to diversify my content further, I launched my own website/blog, created my own podcast (1BPOD always in our hearts), dropped my own merch, posted consistently on TikTok/Twitter/Instagram while growing my YouTube to 1,500 subscribers while posting and editing about 60 videos. I tried to do it all to see what works best and how I could grow in an ultra-competitive environment. I was putting in 12+ hour days at a minimum, but I knew what it would take if I really wanted to make it in gaming and in content.

On Monday, May 24th, I became a Twitch Partner, which is Twitch's verification checkmark. This was an enormous accomplishment for me that took 5+ years of work to achieve.

I was always terrified of Smeagol as a kid and my brother used to torture me about it. SMH. I still am freaked out by Gollum if we're being honest…

Not to be a 5'9" version of Tony Robbins, but I wanted to write this blog to showcase that if you are serious and dedicated to pursuing your passion, you'll never know where it could take you. This is coming from a guy that doesn't have the comedic genius of Barstool Nate, the podcasting ability of Joe Rogan or the gaming ability of Ninja/Nickmercs. I'm not overly talented and I've never once gone viral - I just stayed consistent, put the time in to grow and tried everything in my power to make it in the content world.

When I first started streaming in March 2020, I had absolutely zero connects with Barstool or the gaming world. Never in my wildest dreams did I think I'd be writing this blog from inside HQ. To say it was easy is an enormous understatement, but as you could imagine, it was well worth it in the end.