You know what night it is, folks!

Last year we found a ton of success finding the underdogs when it came to predicting the Oscars. The wave of support for 'Parasite' overtook the Oscars, and we saw a historic night for the movie and its director Bong Joon-ho.

I would not expect to see a big slew of upsets tonight. The favorites are heavily situated in their categories, and the results likely won't be as shocking. I also need to note that a huge disclaimer is that the following odds are provided by Kambi and not available in the Barstool Sportsbook.

With all of that said, there are still a few notable nominees to look at…

It's no secret anymore, especially after the win by 'Parasite' last year, that the Best Picture category is incredibly hard to predict these days. Last year my friend Walt Hickey, who is as good as anyone at breaking down award shows, laid out pre-Oscars reasoning as to why 'Parasite' was a great upset pick…

When I talk to folks about how the Oscar voting shakes out, the question tends to be something like, “I know 1917 won a lot, but I really like Parasite and I think that a lot of the Academy probably also does, and I wonder if the weird voting thing that they do means that the movie I like has a shot?”

Ranked choice is a process where people rank the Oscar movies on their ballot. The votes are all counted up, and if one movie has more than 50 percent of votes, that movie wins. If a movie doesn’t have 50 percent of votes, all the ballots that voted for the movie with the lowest votes get moved to their second choice. Then the process repeats until some movie breaks 50 percent.

The objective is to find the film most amenable to the largest number of people. As a result, it’s nice but not all that critical to get a massive pile of #1 rankings. Realistically, a nine-nominee field is not getting settled on the first ballot. What competitive movies need is to simply be ranked better than their top rivals. Last year, the fact is that a majority of the Academy ranked Green Book above Roma. It’s that simple. (via Numlock)

He was spot on last year, and people now believe even more than last year that the Academy voting pool for Best Picture is as diverse and young as ever. Clearly, this line of thinking fit perfectly with the run 'Parasite' made last year, but do any of the nominees outside of the heavy favorite 'Nomadland' (-670) have a realistic shot? 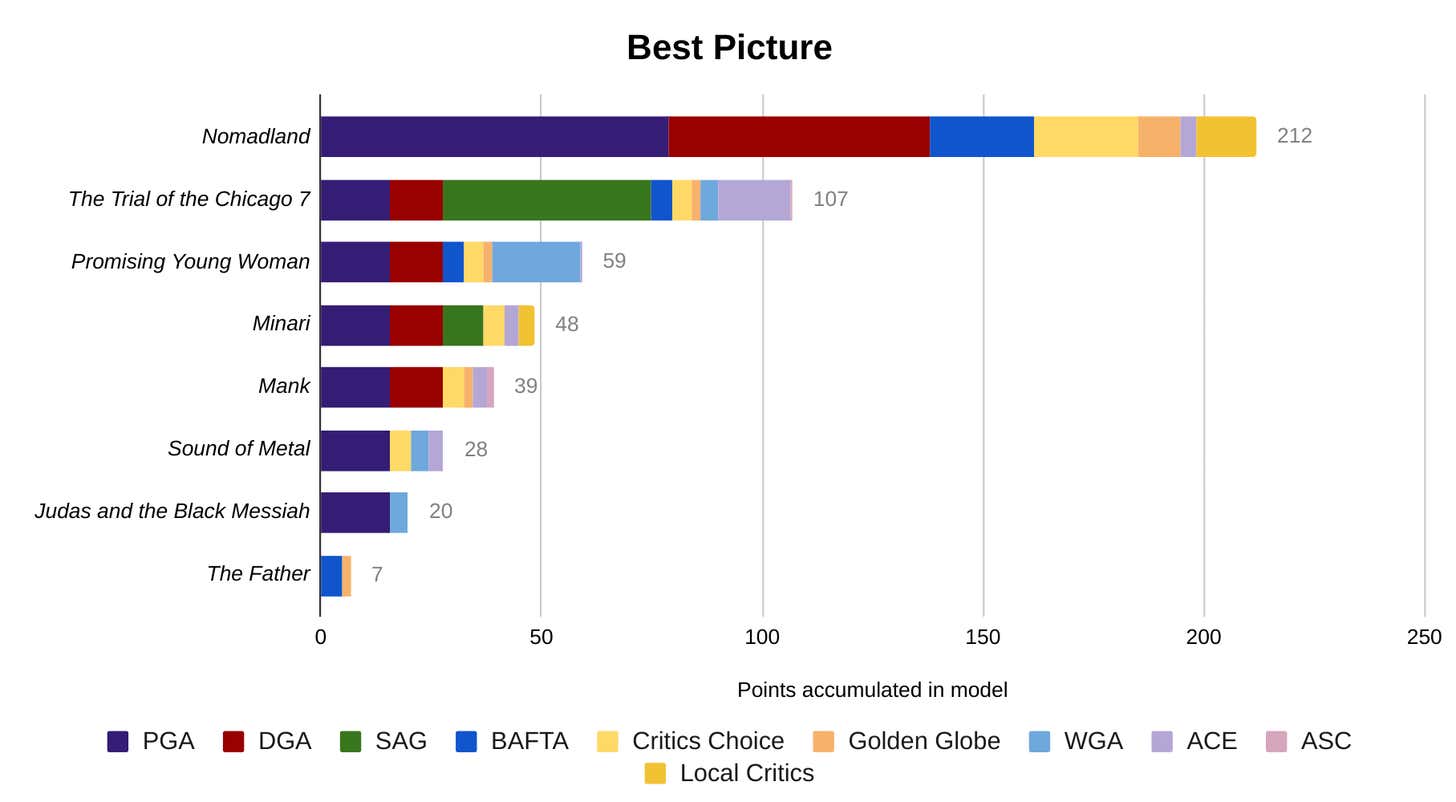 While I wouldn't call 'Nomadland' divisive, I do think more people could be against that movie than they would be with something such as 'Minari'. Last year, '1917' just didn't have enough of a consistent like to push it over 'Parasite', which makes sense since almost everyone imaginable liked that movie. Now, 'Minari' is no 'Parasite', but the sentiment around the movie seems almost perfectly positive, meaning I really can't see that many people having it below their top two or three in the voting process.

Out of the three movies I list at the top, I just think 'Minari' has the best chance to pull off a stunner tonight. 'The Trial of the Chicago 7' continues to have major backing, though, and 'Judas & the Black Messiah' is my super-longshot solely due to all of its acting nominations. But, bottom line, 'Nomadland' feels like an incredibly shaky favorite, based on what we know about the ever-evolving Best Picture category.

These are less "upset picks" and just "picks" since there is no real favorite tonight at the Oscars. Easily the closest race tonight, this is what the numbers say for the Best Actress category… 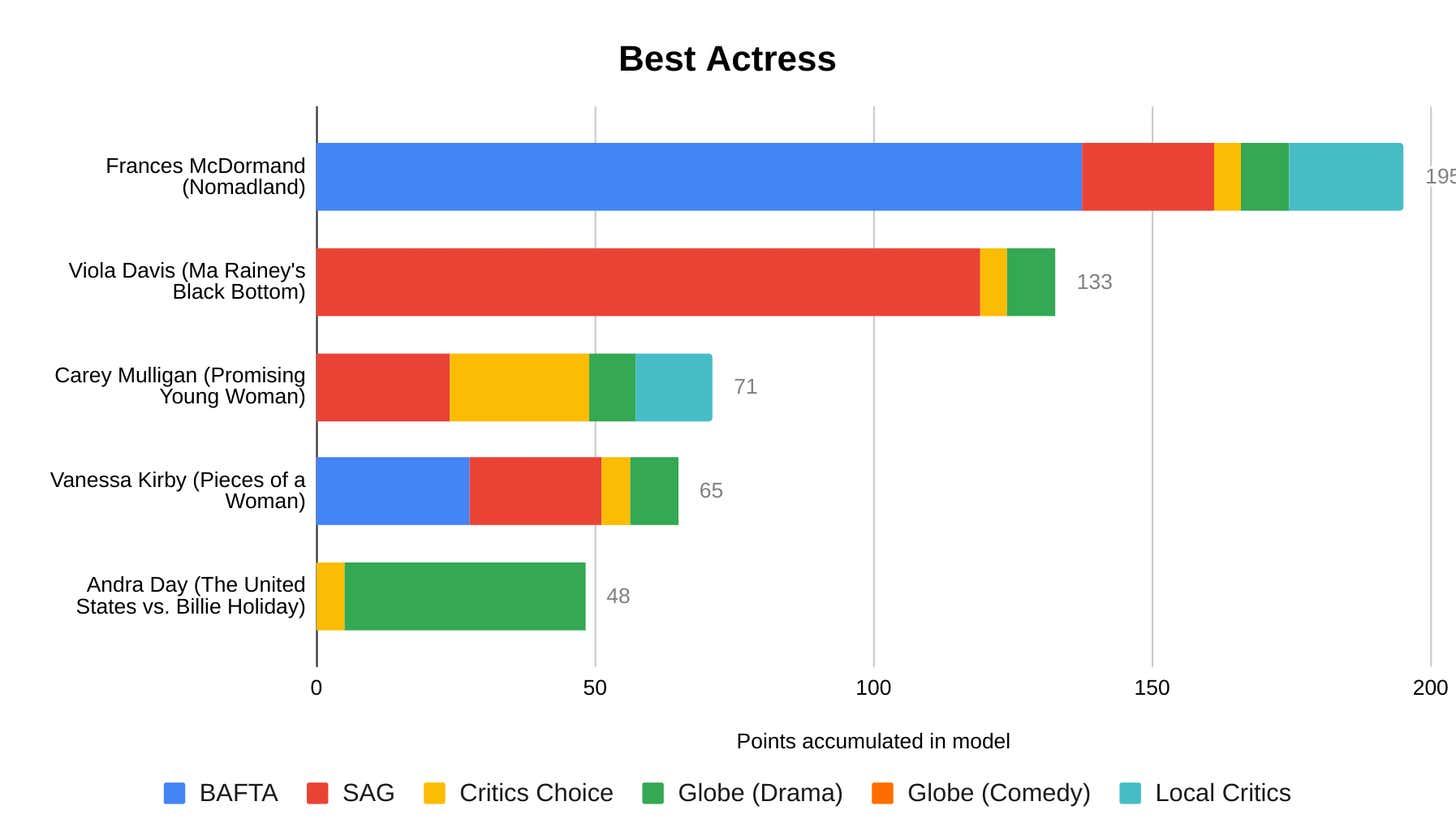 Personally, I think Carey Mulligan should win this award, but all signs point to the favorite not walking away with the Oscar for her role in 'Promising Young Woman'. This whole category is a toss-up, but I just have a hunch we are going to see a sweep for 'Ma Rainey's Black Bottom' with Chadwick Boseman for Best Actor, and Viola Davis for Best Actress. Frances McDormand winning her third Oscar for 'Nomadland' is a juicy pick at those odds, as well.

Seriously, I have no other picks. The favorites this year are very, very strong (Chloe Zhao for Best Director, Chadwick Boseman for Best Actor, etc.), and going against them wouldn't be the wisest of choices.

So just to recap, these are the "upset" picks I like the most:

Good luck tonight with all of your predictions and picks for the Oscars, everyone.