This week, I took my Southern friend to Yakitori Torishin in Midtown for the Chef's Omakase.

Little background on this cuisine for those who are unaware... Yakitori in Japanese literally means “grilled chicken” and yakitori restaurants in Japan traditionally serve every part of the chicken (along with a few other things) on small bamboo skewers that have been grilled over natural charcoal and brushed with a soy-based "tare" sauce made of Japanese rice wine (mirin), scallions, ginger, sugar, soy sauce, sake, and spices.

Mintz has had "food on a stick" before, but I wanted to impress the shit out of him, so I took him to Yakitori Torishin because it is arguably the finest of its type on the East coast and the only yakitori restaurant to receive a Michelin star for 7 consecutive years.

This means nothing to most people, but Torishin only uses Kishu Binchotan charcoal that releases large quantities of infrared rays, is almost odorless, smokeless, and burns for a longer period of time than ordinary charcoal.

And the fact that it is "smokeless" may turn off BBQ aficionados who love smoked meats, and believe me, I am the same way... I have smoked more meats than Heather Brooke (look her up)... But the idea behind yakitori is to let the chicken be the star while adding very few outside flavors for enhancement.

However, they do leave 2 spice bottles on every table... One filled with a common Japanese spice mixture containing coarsely ground red chili pepper called tōgarashi (sometimes called shichimi), and the other filled with Yuzukosho: a citrus-flavored spicy white pepper.

And as far as the bird goes, they source their Jidori-breed chickens from an Amish farm in Pennsylvania and butcher them in house, so the cooked birds are naturally clean-tasting with a firm texture, super juiciness, and a richer chicken flavor than what Perdue is currently pumping full of steroids like a fucking Russian olympian.

That's it… That's all the history you need to know about yakitori.

Now onto the meal.

We had a SHIT-TON of different foods on a stick, and I am fairly positive you won't make it through a description of every single one, so I will just list what I ordered and attach pics and a description where I feel it's needed. 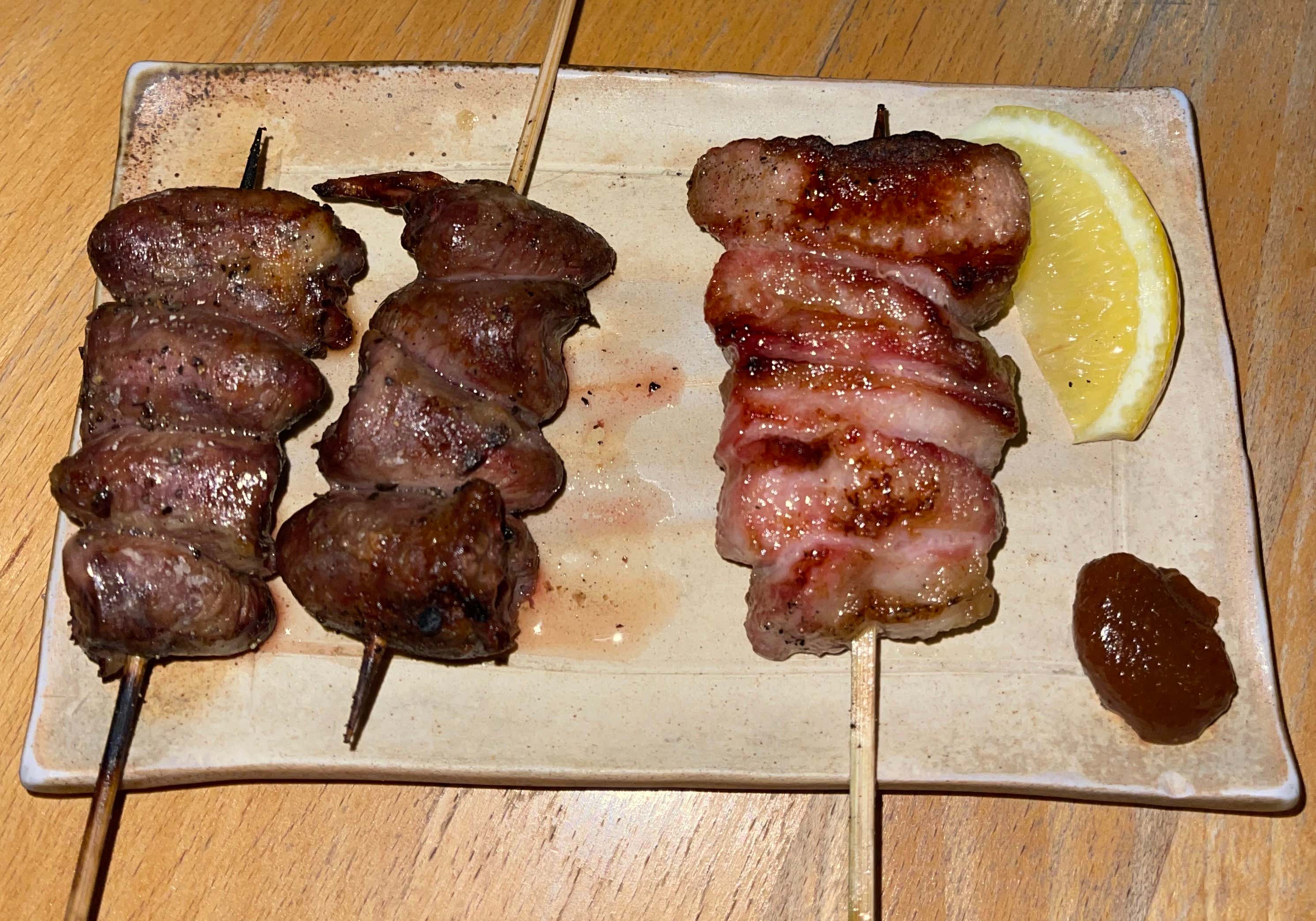 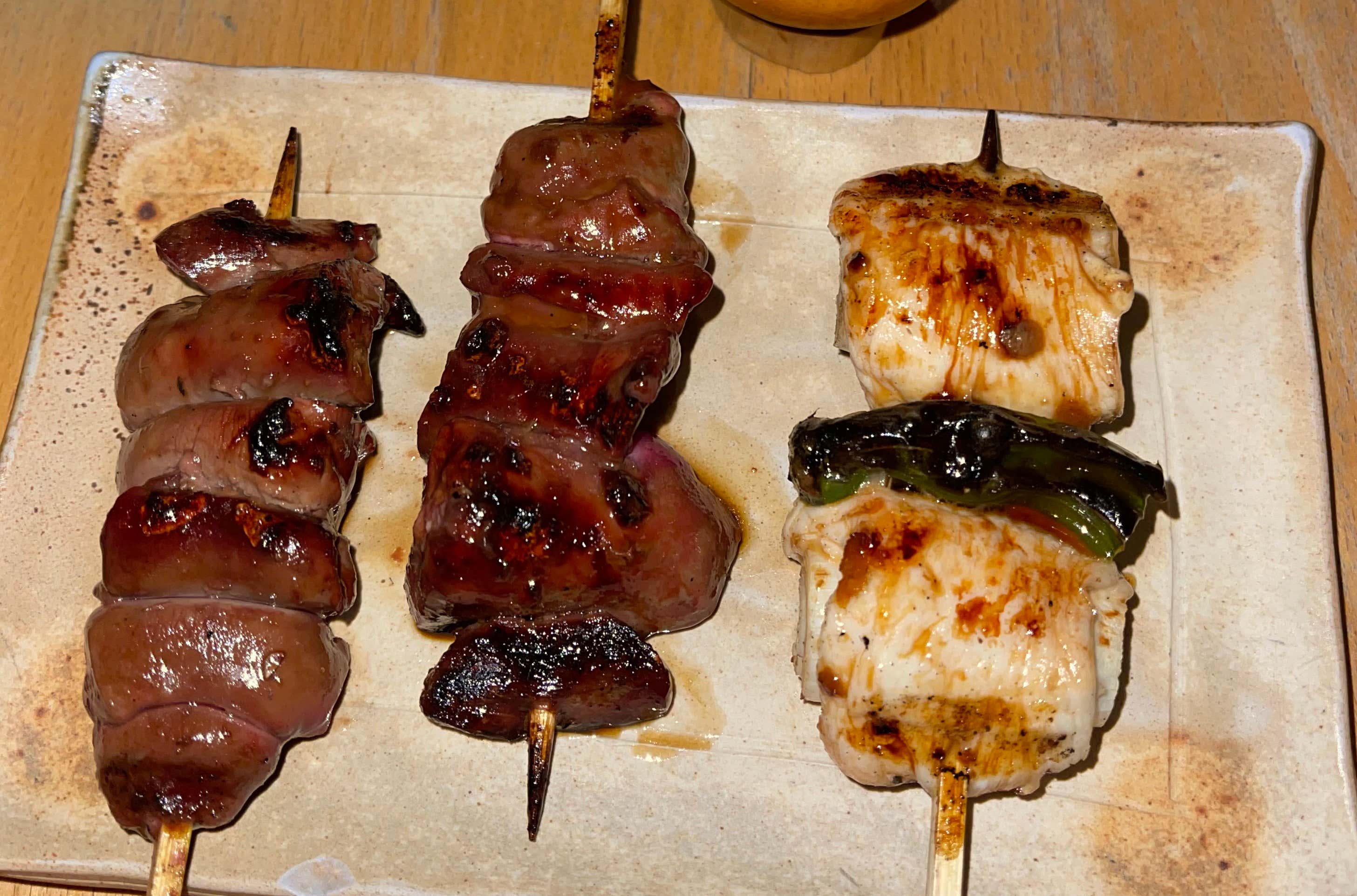 In general, people tend to avoid eating hearts, but also tend to at least try eating liver.  For those who have avoided liver of any kind, I will tell you that this skewer of chicken liver is the perfect "gateway drug" to trying more organs in the future.

The hearts had a rubbery "SNAP!" to them, but the livers were buttery and delicious and didn't have that mineral-ly aftertaste that some get from calve's liver.

- We then had something they called "Main Artery," which I can only assume is the carotid, and it was actually a number of main arteries just folded up and stacked onto a skewer.

- We had 2 seafood courses… The first was allegedly a seasonal ingredient from Toyama, Japan… Fresh Hotaru Ika (Firefly Squid). 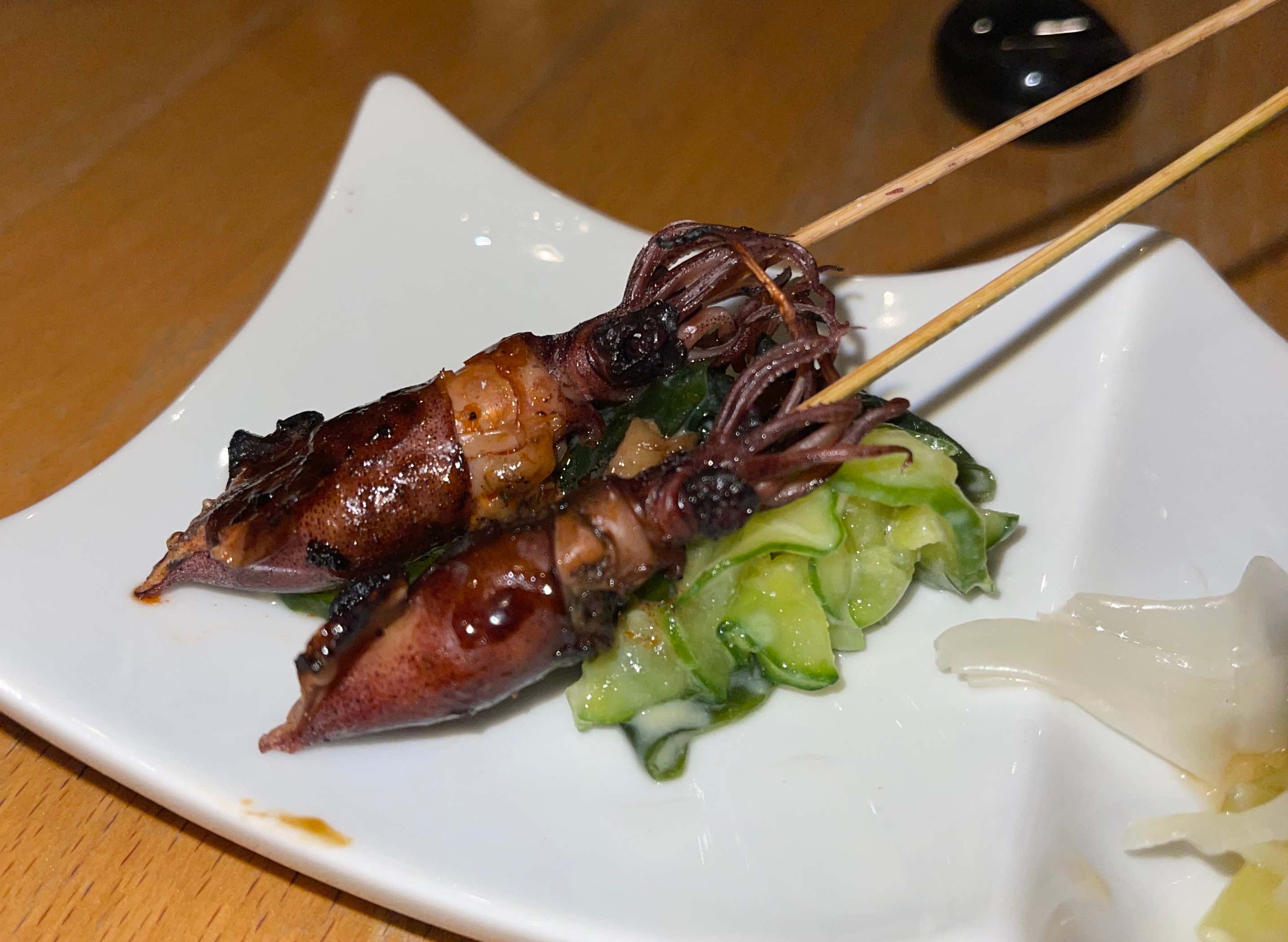 - We had chicken necks.

- Something called “Soft Knee Bone" which wound up being not soft, at all… 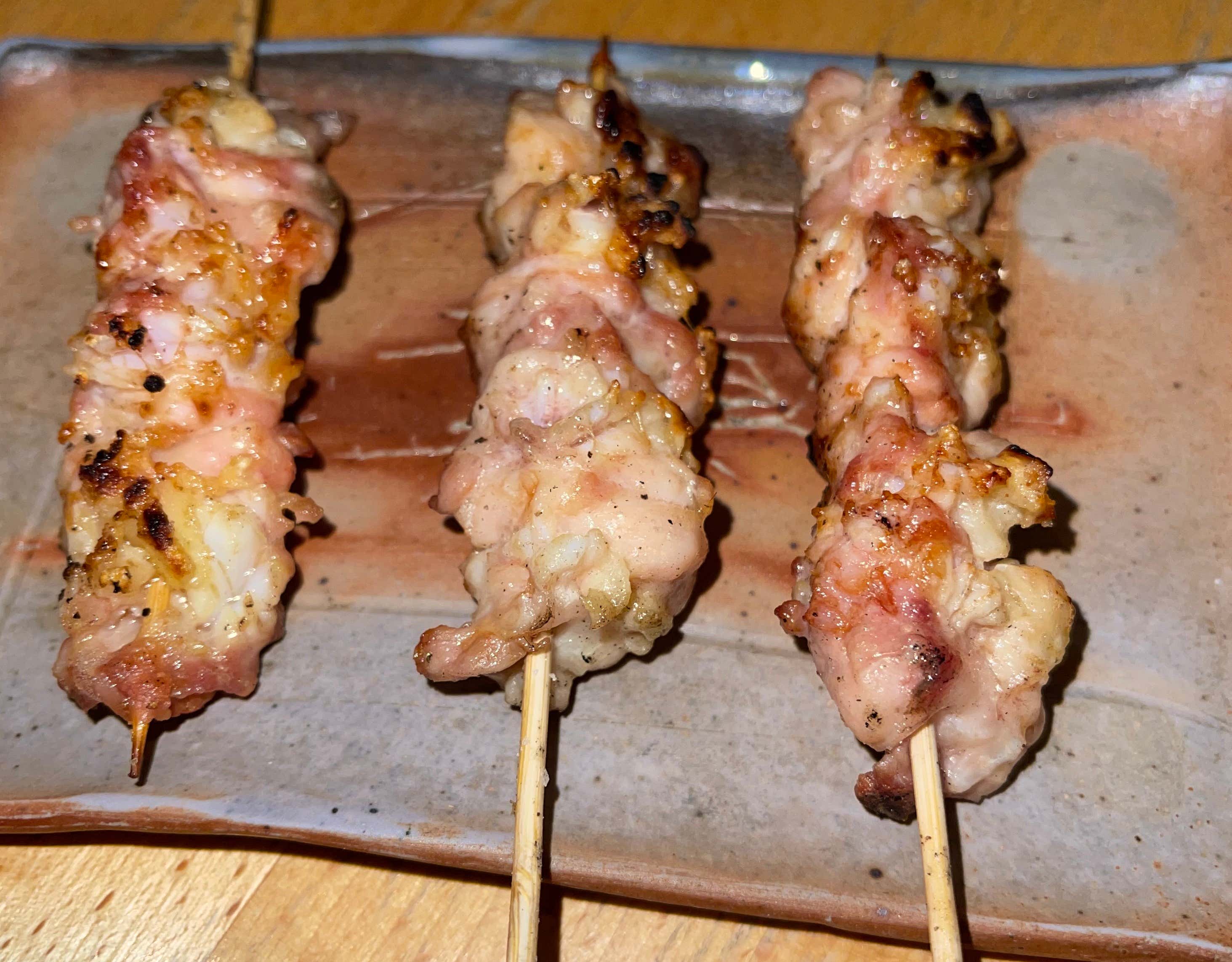 You can see the white tufts of cartilage stick out every which way… The remnants of meat were tasty around the knee, but the bone has no flavor.  It is pure texture.  Pure crunch.

- They served chicken oysters, which is my favorite part of the chicken… They are relatively small and each chicken has only two found on the dorsal side.  On the menu, they are called Sot-l'y-laisse, and they are all those words you hate to say like "moist" and "succulent," covered by a layer of dense skin that rivals duck breast in its fattiness.

- They also soft boil small quail eggs and then grill them on sticks. 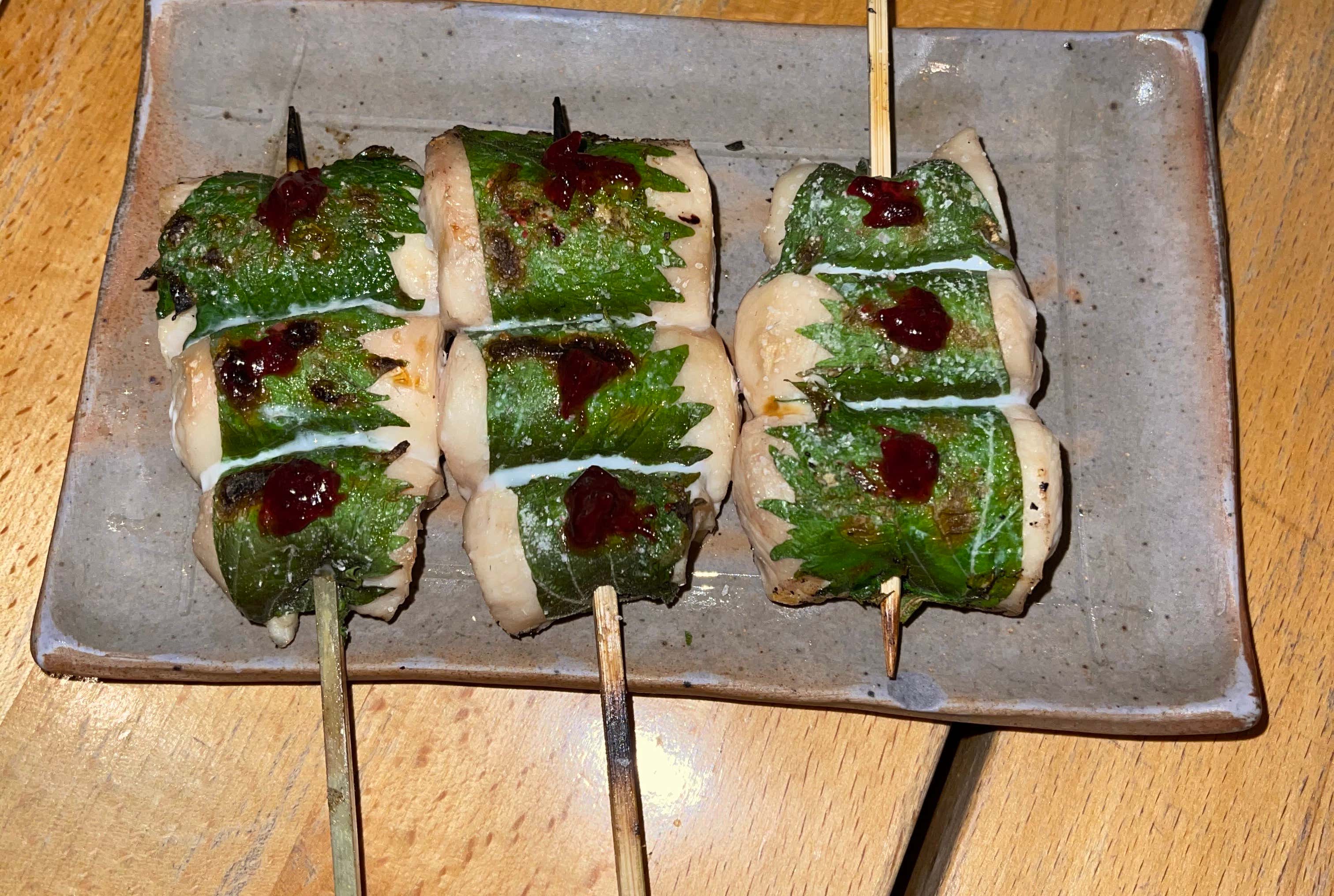 - We had skewers just simply stacked with crispy chicken skin and sprinkled with salt.

- They serve a chicken tenderloin that is barely cooked but incredibly tender and each morsel topped with a tiny spot of wasabi.

- The only other seafood showed up in the final seasonal dish, which was a tamago tofu with crab in a dashi broth topped with okra and "crab butter" (the greenish substance under the shell that is actually a digestive gland known as the hepatopancreas)… 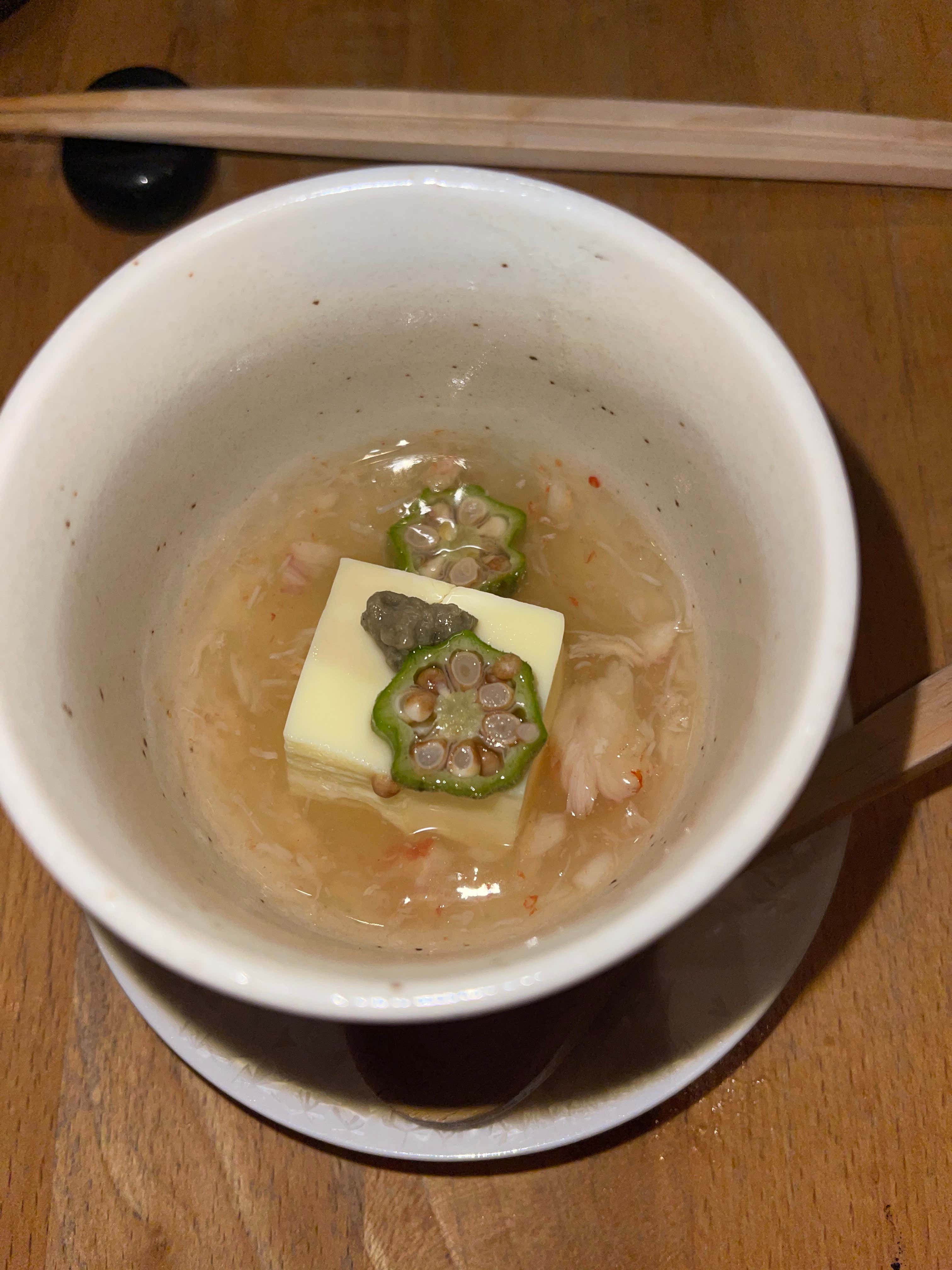 - There is a starch on the table in the form of Oyako Don, which is chicken and egg over rice.

- And then… To wrap it all up, they sent out a matcha creme brûlée that is now easily my favorite flavor of creme brûlée… 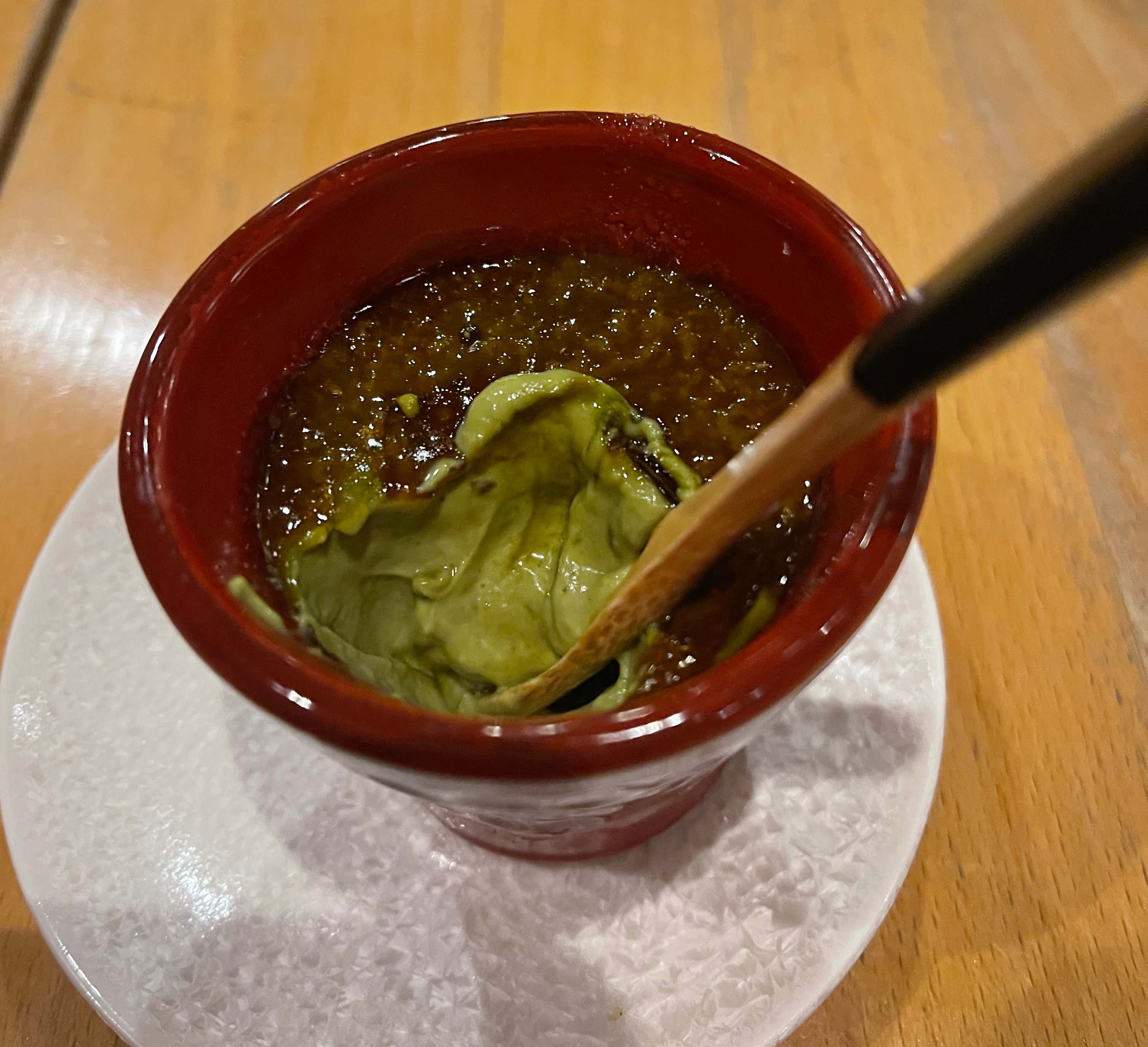 I am less than a thousand words into this blog, but 17 dishes into this meal, so I will wrap it up with a couple of tips for anyone visiting New York and looking to try something different at Torishin…

1. You need a reservation.

2. Even though it isn't an overly fancy place (it's the converted ground floor of a Hell's Kitchen apartment building), it still gets pricey… Mintz and I had hardly any booze, but the bill was still $500.

3. Bring someone like Ben… I have said this before- Ben Mintz may seem like his palate never crossed the Mason Dixon Line, but this guy appreciates good food.  He's probably my second favorite co-worker to break bread with behind this fucking beautiful monster… 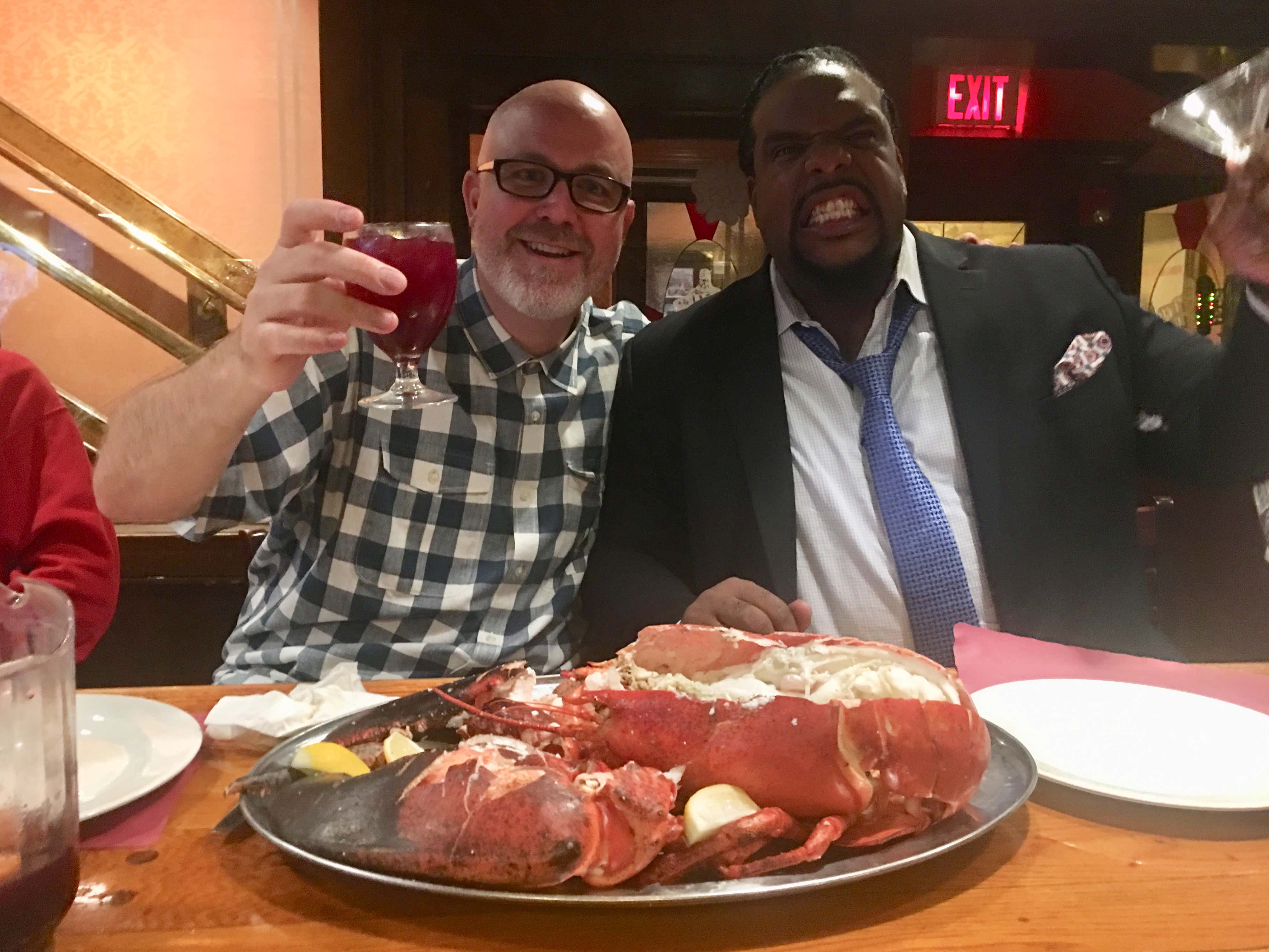 4. There is a sake bar up front that serves some sochu-heavy cocktails, but hold off on the booze until after because this meal is a marathon, not a sprint.

5. They have a fancy toilet seat that opens automatically and doubles as both a bidet AND a hairdryer… It's quite lovely…

6.  And finally, I don't like when people order for me… As a matter of fact, it bugs the shit out of me when waiters would insist I let them "make nice for the table" when I was entertaining clients back in the day… However, places like this (or higher-end sushi joints) are an exception.  Going Omakase ("Chef's Choice") here allows the kitchen to pace out the meal, serving each skewer one at a time (instead of all at once), just like a proper sushi maestro doles out nigiri piece-by-piece.  It ensures each different part is consumed at the proper temperature, with nothing else on the plate to distract you.

So the weird-ass menu might tempt you to order a la carte, but you really shouldn't.

Let the guy at the grill take the wheel… I don't think you'll be disappointed… And you might even whisper, "I want you inside me."

Barstool's weekly food and booze chat called Grubhouse with Clem, Coach Duggs, and a couple of other characters starts at 2 PM today on Twitter Spaces.

And here's the WEEKLY FOOD CALENDAR