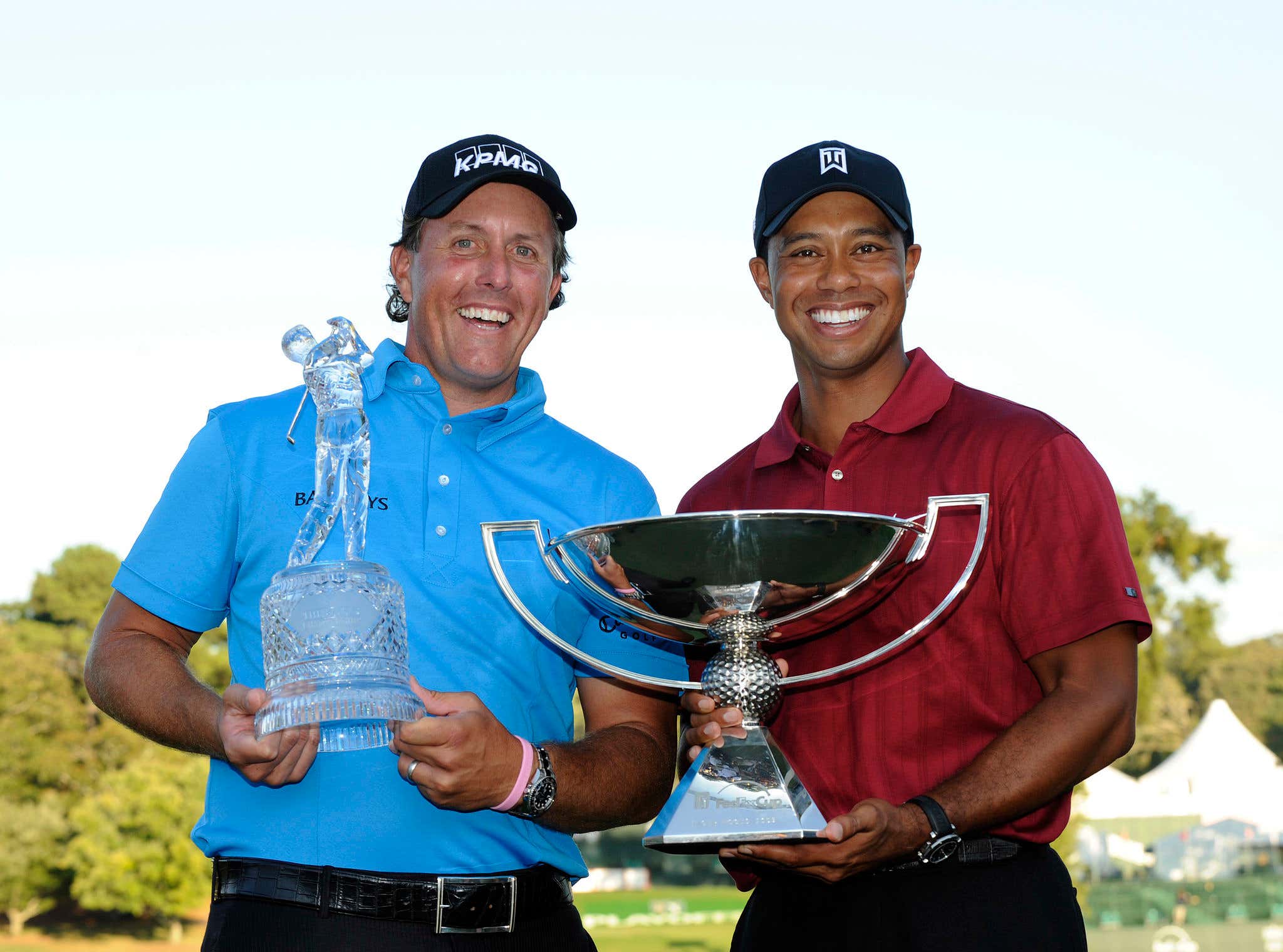 GolfWeek - The PGA Tour has created a lucrative bonus structure that will reward golf’s biggest stars regardless of how they perform on the course, Golfweek has learned. The new system is designed to compensate players who are judged to drive fan and sponsor engagement, like Tiger Woods, Bryson DeChambeau and Rickie Fowler.

Known as the Player Impact Program, the concept is seen as a direct response to Premier Golf League, a proposed splinter tour funded by the Saudi Arabian regime that has tried to lure golf’s biggest names with the promise of a massive guaranteed pay day. PGL has spent years trying to gain traction but seems no closer to signing a sufficient number of elite players to be viable. The stuttering PGL effort nevertheless forced the PGA Tour to devise a means to reward stars for the value they add to the overall product rather than solely for their on-course performance.

A PGA Tour spokesperson confirmed to Golfweek that the Player Impact Program began January 1 to “recognize and reward players who positively move the needle.” At the end of the year, a pool of $40 million will be distributed among 10 players, with the player deemed most valuable receiving $8 million.

The 10 beneficiaries will be determined based on their “Impact Score,” a number generated from six separate metrics that are designed to quantify that individual’s added value. According to a document the PGA Tour distributed to players, the contents of which were shared with Golfweek, the metrics on which players will be ranked against their peers include:

(1) Their position on the season-ending FedEx Cup points list.

(2) Their popularity in Google Search.

(3) Their Nielsen Brand Exposure rating, which places a value on the exposure a player delivers to sponsors though the minutes they are featured on broadcasts.

(4) Their Q Rating, which measures the familiarity and appeal of a player’s brand.

(5) Their MVP Index rating, which calibrates the value of the engagement a player drives across social and digital channels.

(6) Their Meltwater Mentions, or the frequency with which a player generates coverage across a range of media platforms.

The Tour will employ an algorithm to turn the values from each metric into Impact Scores for every player and a ranking of those Scores then determines the bonus amount due. The FedEx Cup rank is the only measurement explicitly determined by performance on the golf course, but the others can be directly impacted by strong play.

Well this right here is an interesting proposition if I've ever seen one. A popularity contest? $40 milly? Seems crazy on the surface. Golf has always been a sport based on results. Drive for show, putt for dough as they say. Never mattered if you were a dickhead along the way as long as you ended up on top of the leaderboard.

Sure, if you wanted to build a brand outside of the leaderboards like Arnold or Rickie, you always could. There's millions to be made there for sure. And you certainly still have the freedom to not give a single hoot about how others perceive you, it's just a little bit more difficult to swallow when there's as much as an additional $40M sitting there on the table.

This is being painted as an answer of sorts to those tournaments in the Middle East that pay the top guys just for showing up. The Waste Management is one of the best tournaments of the year at an awesome course that has been hurt by guys traveling 12 times zones away to play the Saudi International instead. Hell, Phil played the People's Open in the backyard of his alma mater for nearly 30 years before choosing to take the bag at the Saudi the past couple of years. I don't fault him for that and he's not alone. A bunch of guys do it at a variety of events throughout the year. Money talks. I'm just not sure how this exactly prevents that. Maybe there's language written into this program that penalizes or excludes players that take those paydays. But if this truly does achieve the objective of keeping PGA Tour players stateside by putting money in their pockets thru a creative avenue such as this one, then I'm all for it.

The obvious upside is that players will be encouraged to be more attentive, more accessible, and more conscious of their presence and how they're perceived by others. Particularly on social media. As a fan, that's fucking awesome. But one of the few problems I have with this program is that it only rewards the Top 10 guys based on the criteria they've devised. That should be expanded - to at least the top 25, if not 50 or 100. More players should be getting a piece of that pie. A young guy like Max Homa is beloved on social media and is so #goodforthegame. He and a bunch of other guys that fall in a similar bucket won't see a dime from this unless they blow up into superstardom. It's going to be really tough for those guys to crack a Top 10 that will be sure to include Tiger, Phil, Spieth, Rory, Bryson and others for many years to come. If I'm one of those guys I'm throwing my hands up in the air and saying 'what the hell, man?". Because they've been writing the manual on how to be likable on Twitter and social media for years and now these superstars are going to piggyback on that and get paid to do it. That's one thing that's gotta be fixed.

At the end of the day, I'm all for things that put more money into players pockets. You can look at these $10M event prize purses and FedEx Cup payouts and claim they're overpaid all you want but the fact of the matter is it really isn't enough. If we're talking strictly on-field earnings, Tiger Woods' $120,851,706 wouldn't even crack baseball's top 100 for career earnings. Sure I'm talking apples and oranges a bit there and Tiger has more than made a pretty penny through other avenues, but the PGA Tour is raking in so much dough on the back of these guys. They should be getting more and this is one way to do it. Their fan engagement matters and rewarding those that do a better job of that than others is a net positive.