Having already kicked off the 2021 season with a record-hitting streak consisting of 8-straight hits against the Kansas City Royals, Yermín blasted a 485-foot home run – the third longest home run ever at Guaranteed Rate Field – during the White Sox Home Opener. At the time this was published, Yermín is leading all of Major League Baseball with a .556 batting average into the first eight games into the season.

I can't wait to sink my meaty paws into this burger. Just look at that thing - meat on meat on meat with a whole bunch of other shit. Sure, one glance at him and you'd know that Yermin Mercedes doesn't oft miss a meal, and I doubt he's had it yet, but I'm sure our meaty DH will more than approve of Freddie's new "Yerminator".

And Yermin's earned it. I've been waiting for a little bit to dedicate a post to Yermin Mercedes because there was NO WAY my spirit animal would fstay as hot as he was. That's obvious, but I wanted to make sure he didn't do a complete face plant, either, and at this point I'm confident in saying this: Yermin Mercedes will stick at the MLB level.

It'll have to be as a DH but he absolutely, 100% has a place at the highest level the game has to offer. His approach to hitting is that good.

"BUT WSD YOU FAT MIDGET WHAT DO MEAN?"

I say this without taking his absurd 'face value' statistics through 16 games so far into account. I'm looking at one thing and one thing only - his approach, or his method on how he attacks pitching pitch to pitch, at bat to at bat, and game to game. We're getting BALLS DEEP in baseball talk folks! We're talking about the underlying numbers, or the numbers you don't see. These numbers are a direct result of Yermin Mercedes' very methodical, very specific approach to obliterating baseballs.

Yes, the BABIP gods have been nice to Mercedes thus far this year. But they're rewarding him for having an A+ approach thus far. If you've watched Mercedes hit, his approach is blatant.

Mercedes gets ABSURD torque in both his wrists and core and tries to murder baseballs in cold blood when he's in a hitter's count. Take a look at this picture: 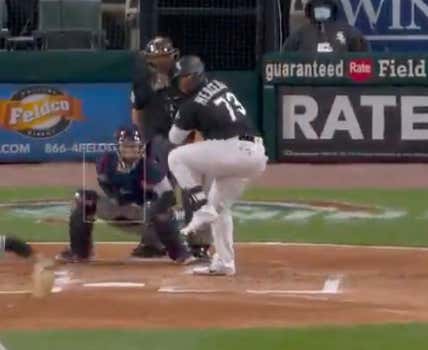 But he's also not in full on swing mode like you see with Robert, Abreu and a few other hitters right now. He sits on one pitch in one spot and if he gets that pitch in that spot, he tries to murder the ball. It's as simple as that. Dude is fun to watch hit not just because he kills the ball, but because he swings out of his shoes to do so.

And then we get to Yermin with 2 strikes:

The Yerminator shortens up, gets rid of the leg kick/ bat cock and does whatever he can to put the ball in play while fouling off pitchers pitches non stop. I say this in the best way possible: Yermin Mercedes is a complete cock sucker at the dish. Pitchers have to HATE facing him. If you miss in the zone, he kills the ball. When you get him to 2 strikes, he doesn't swing and miss (especially at balls off the plate), he spoils pitch after pitch, and eventually finds a way to put the ball in play. This is very much a sustainable approach. Dude has a whiff rate that's in the 94th percentile, per Baseball Savant: 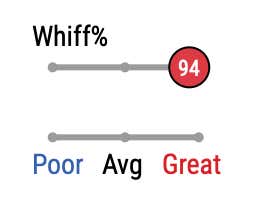 The long story short of it, is that Yermin Mercedes possesses an approach that can be sustainable. His bat to ball skills are too good for him to completely face plant. Now, he's as hot a hitter as there is in baseball but if we can get say, a .275/.350/.500 slash line with 20-25 bombs out of him this year? That's gonna net him some ROY votes and we would have LOVED those numbers out of Vaughn as the every day DH in his rookie season. Now hopefully Yermin stays hot and Vaughn starts to hit as well. That's a nice little score that wouldn't have happened without the loss of Eloy and once Eloy's back the White Sox have a nice little problem on their hands

Let's go!!! Game 4 just started, let's take 3 of 4 in Beantown then head back for a nice long home stand.