Are you a fan of money, violence, and 3 hours of fun on Friday nights? Well then join our RnR 14 contest on Play Barstool AKA picking these  5 fights to walk out of your living room as a $25,000 CHAMPION after April 23rd...

At the very least someone is guaranteed to become $1,000 richer so there's NO reason not to use your free entry. Last PPV we did have a 10/10 winner thanks to Billy Football's vicious KO so it IS possible to win... And really where else are you gonna be able to pick a 4'4'' vs 4'5'' winner, or watch a 225 lb street fighter face off against a 400 lb legend? LET'S GET INTO IT....

THE MILKMAN vs THE MONEYMAN 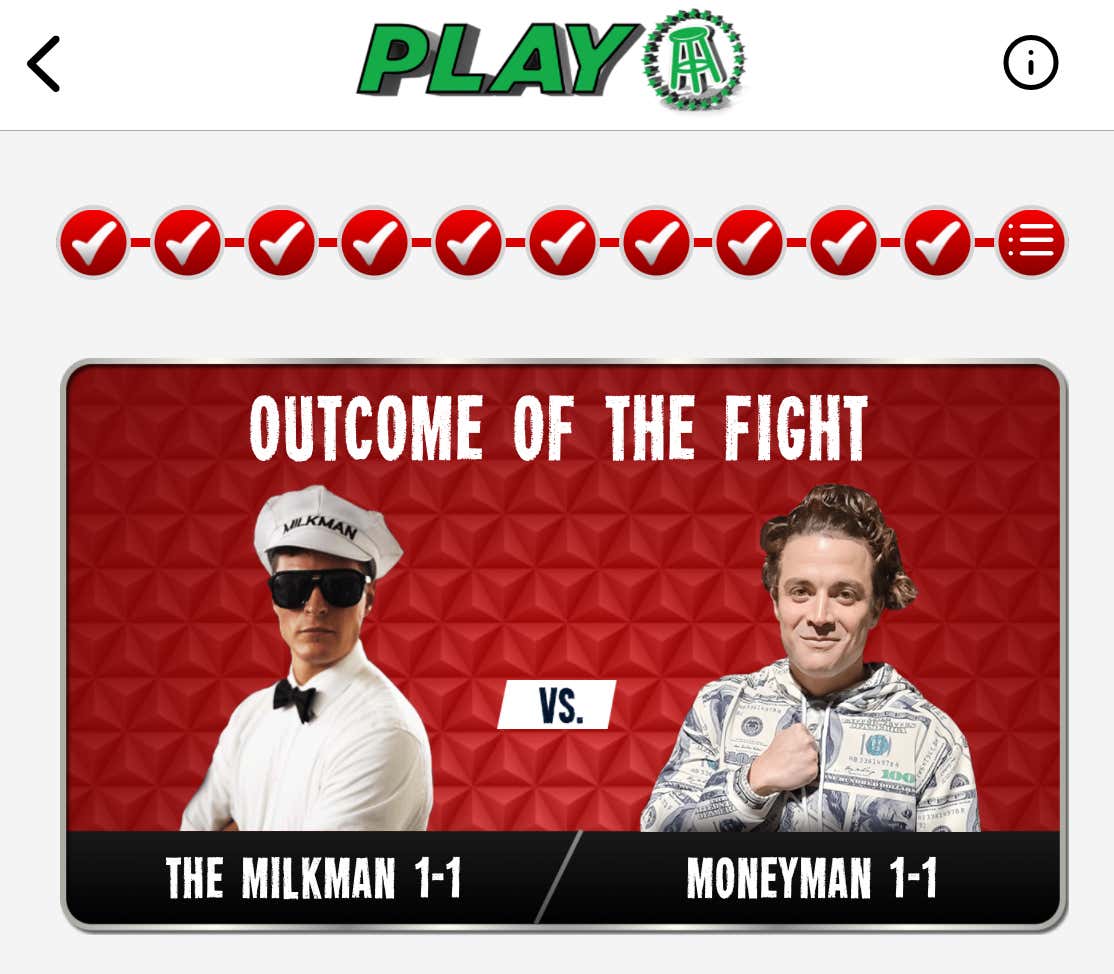 FYI this is the only Play Barstool fight that isn't for a title belt but both these guys have championship potential pumping through their veins. THE MILKMAN is a RnR legend who may only be (1-1) on the sheet but is still undefeated in our hearts… mainly for failing a drug test at RnR 5 and proceeding to not only invade the ring against the commissioners orders (now retired) but also did this after I handed him 2 gallons of milk:

Love him or hate him, THE MILKMAN always delivers whether he fails the drug test or not. His 1 loss came at the hands & mouth of I EAT ASS but he still showed legit power in that fight just like his win at RnR 4. But THE MONEYMAN aka Scary Barry is no slouch either, in the ring or on the mic. Also (1-1) but with more to prove in this PPV since he's still looking for his signature RnR moment. Does the legend persevere or is there just too much rust for him to knock off? I'm going with the latter aka SCARY HOURS.

Prediction: THE MONEYMAN in 3 rounds by Decision 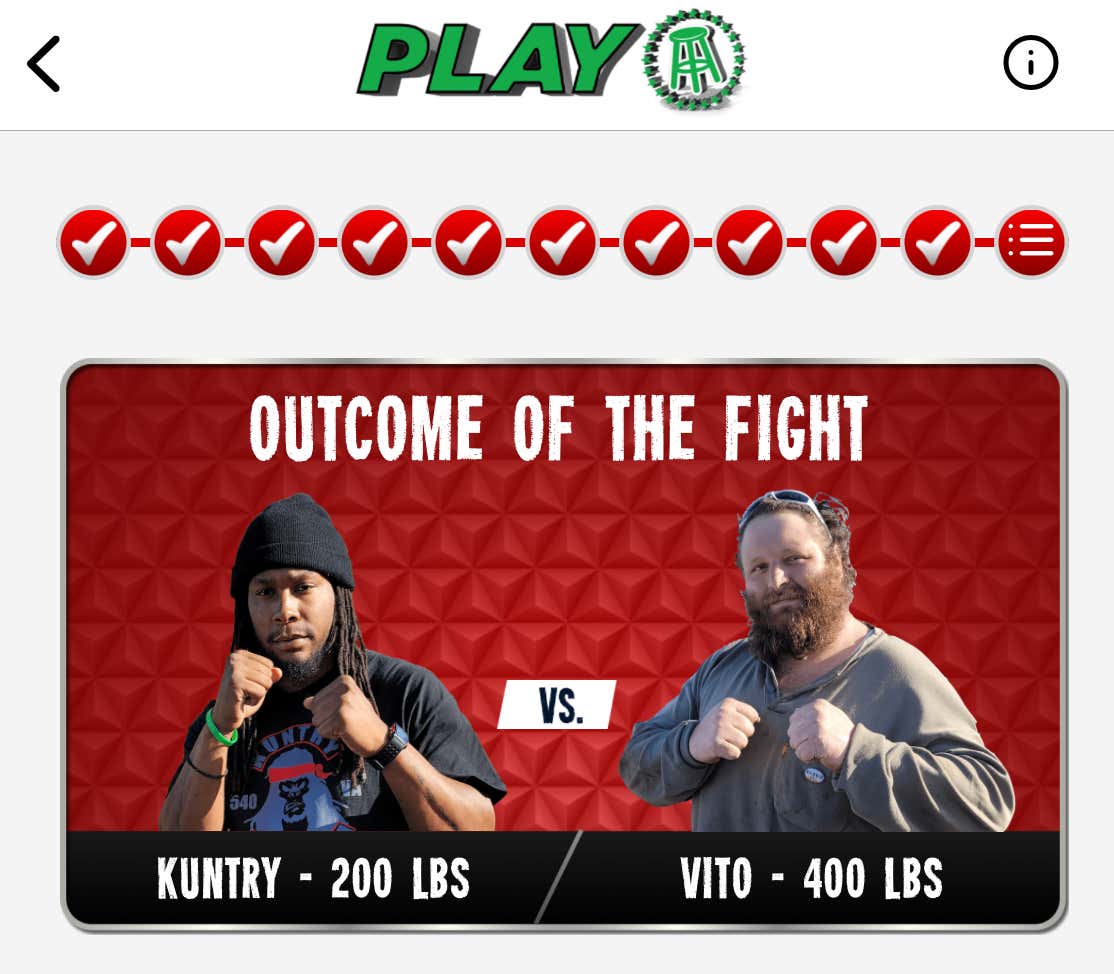 Kicking off our title fights we have an ALL-TIME matchup with another RnR legend returning to the ring. VITO THE TORPEDO fought all the way back at RnR 1 when we still had All Business Pete doing commentary and is just the definition of a throwback fighter. Just some casual clothes, easy movements, and some RAW. FUCKING. POWER.

It's TBD whether he's lost a step but I can tell you that he has lost some weight since the fight above. Saying he's 400 lbs is just sexier for the poster but truth be told, he's only 385 lbs now. And losing that 15 may honestly be the difference here because KUNTRY HOODLUM isn't just a RnR champion, he's also a Street Beefs champion + undefeated fighter wherever he goes. He's taken down JEANS TURMAN and had a knockout in his other match, so don't let the nearly 169 lb difference fool you. The Super Heavyweight title belt may not change hands on April 23rd but it ain't gonna be easy no matter how you slice it.

Prediction: KUNTRY in 2 rounds by KO 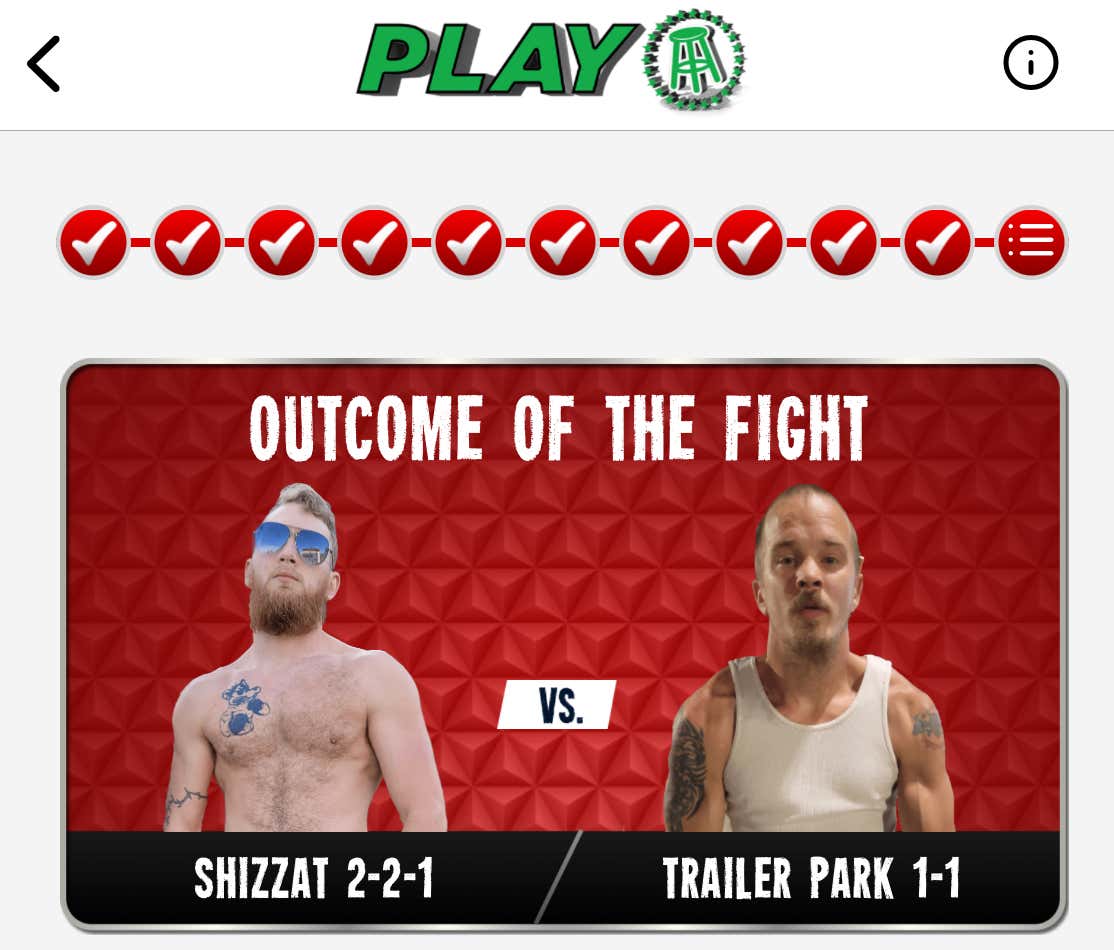 In any other PPV this would likely be the final fight of the night. Seriously though, how long would Jake Paul last in the ring against SHIZZAT DA RIZZAT? How long would he last against THIS:

He'd probably last longer than TRAILER PARK will this Friday night but point is, no matter who you put in front of the pride of Coker Creek, TN… they're probably going down hard in a heap of mangled flesh. This is only the 2nd time SHIZZAT has had a title shot (losing to NIGHTY NIGHT for the Middleweight belt at RnR 8) so it's hard to bet against him here for the Lightweight. If TRAILER PARK even makes it to the 3rd round then Waffle House for him & Momma is on me though. TRAILER PAHK!!!

Prediction: SHIZZAT in 1 round by KO 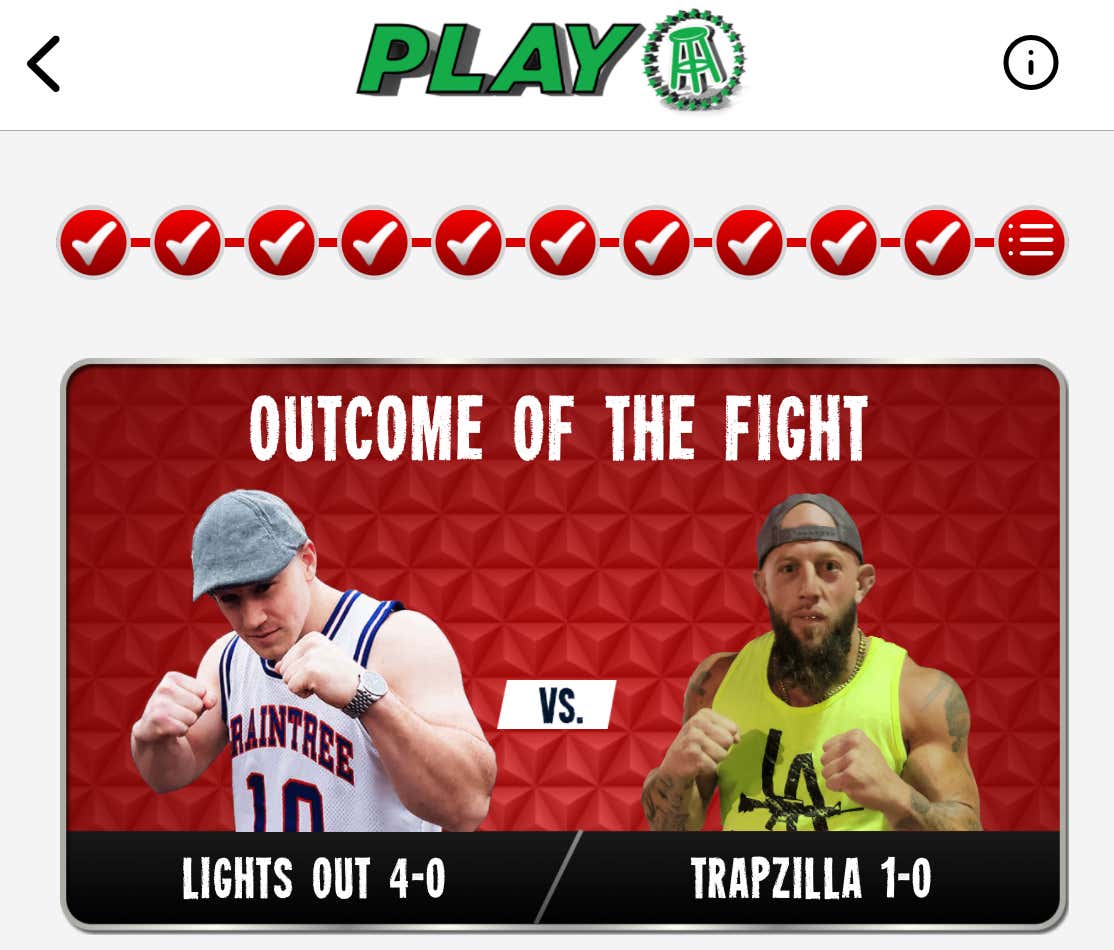 In our Heavyweight title fight we have the immovable object vs the absolutely immovable object with 2 absolute beasts finally facing off against each other. LIGHTS OUT needs no introduction but I'm gonna give him one anyway. A (4-0) brawler who's taken down 2 of our greatest champions (NIGHTY NIGHT + JEANS) with ease, he's a loud mouth from the South Shore of Massachusetts who "doesn't give a flying fuck" about your traps. No one has hit harder, lasted longer, or run through our fight cards like him. And he's got A+ memes to go along with his title belts too…

His challenger TRAPZILLA doesn't have the same resume but he does have the traps along with quite the athletic background. He's our 1st ever male stripper/professional arm wrestler and although he missed RnR 13, his KO at RnR 12 likely still has some ears ringing in West Virginia. He's a specimen no doubt and clearly doesn't fear LIGHTS OUT, but I refuse to pick against the Champ Champ Champ until proven otherwise. What a fucking glorious slobberknocker this is gonna be though. 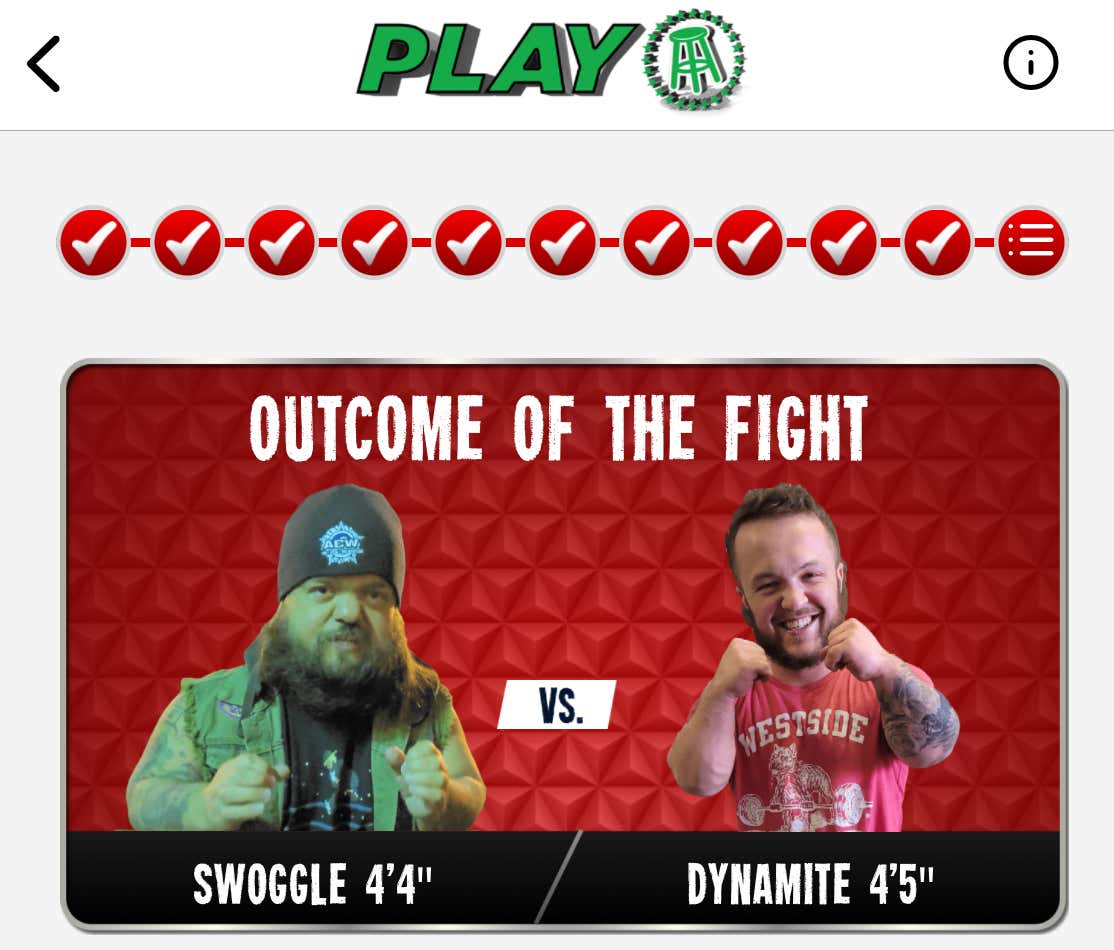 Folks welcome to the motherfucking main event aka THE BMFM TITLE MATCH… A former WWE champion vs The Strongest Dwarf In The World. WHAT MORE CAN YOU ASK FOR IN A FIGHT? It's still insane to me that we have SWOGGLE stepping up for a shot at the top that he's wanted since watching RnR 13 in February. That's the magic of Rough N' Rowdy, and does make me wonder which pro wrestler is gonna step up next?

But it is gonna be a tall task for him since the current BMFM DYNAMITE squats 745 lbs + benches 505 lbs, trains at Westside Barbell 24/7, and still feels like he has a lot to prove in our ring. It's quite possible we NEVER find a fighter under 4'5'' that can take him down but if anyone can fucking do it, it's gonna be the bastard son of Vincent Kennedy McMahon.

Prediction: SWOGGLE in 3 rounds by decision

Head to PlayBarstool.com now to make your picks and the tune into BuyRnR.com on 4/23 at 8 pm for every fight, ring girl dance, Dave Portnoy + Dan Katz commentary AND MORE 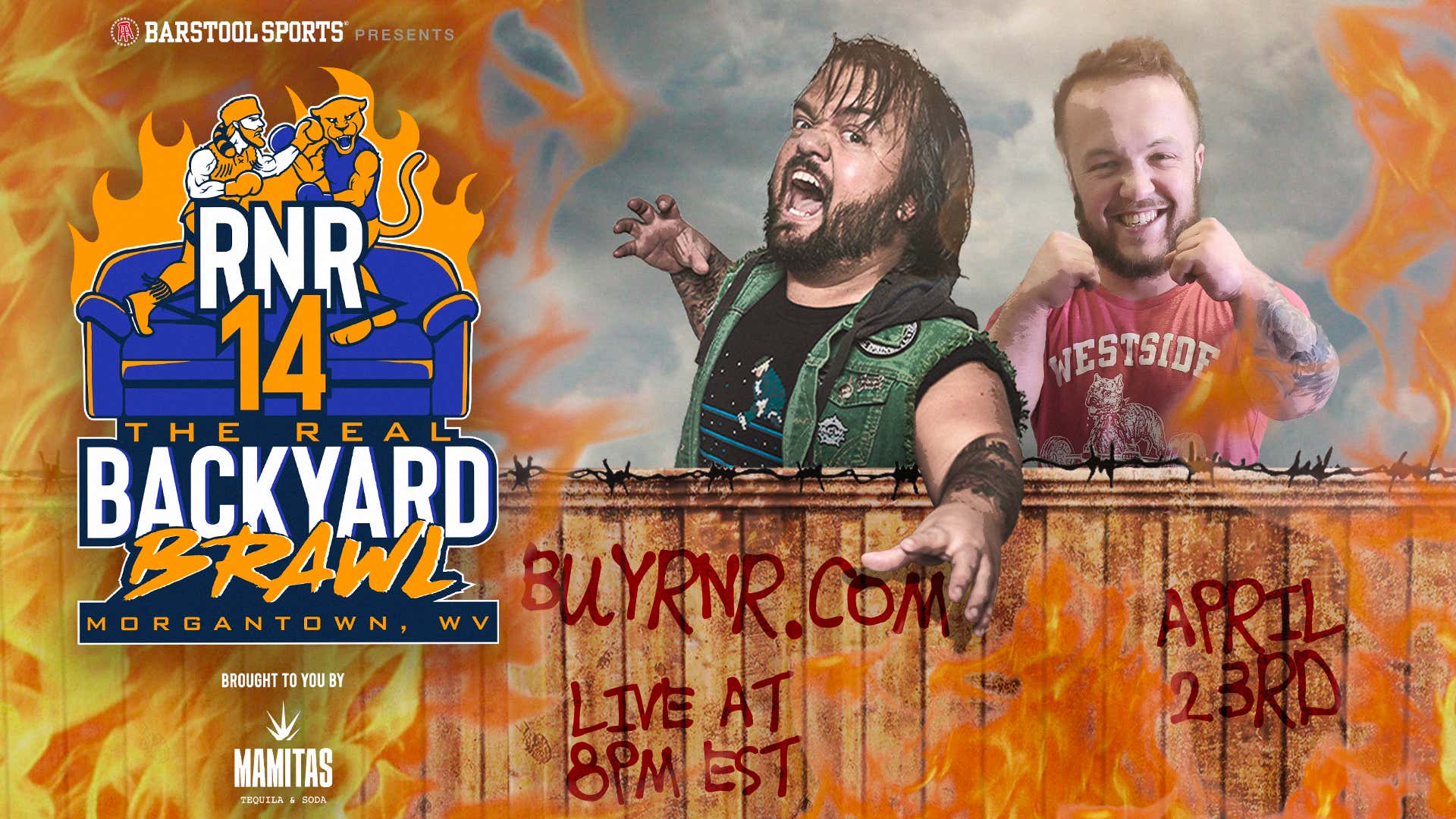