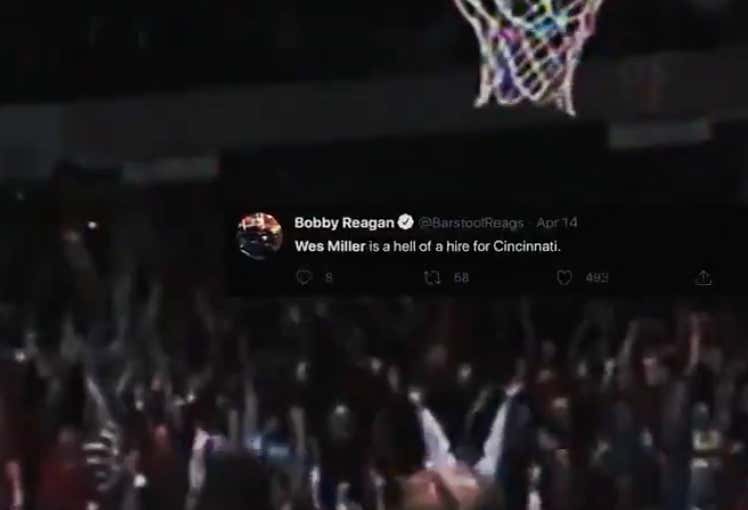 Cincinnati hires Wes Miller, we know that. But I bet what you didn't know was Cincinnati needing me to hit leadoff to promote him. Makes sense. Get the top college basketball opinion in the country and a beautiful face to hit leadoff. Follow it up with Dick Vitale as a let down. That's A+ marketing. It's not like I'm a Cincinnati fan, just putting my two cents on the hire. But the UC social media and marketing team know what sells and that's an average looking guy with an average tweet.

Speaking of the hire, let's talk about it. I am our college basketball guy after all and Cincinnati was once a proud program. It's a hell of a hire. Wes Miller is fucking awesome despite being a couple years older than me and looking younger. He turned UNC-Greensboro into one of the best mid-major teams in the country. He knows how to recruit, look at a guy like Isaiah Miller. He plays a style that fits and people want to play in. It's uptempo, free flowing and somewhat similar to what you see out of Florida State defensively with the pressure.

Also, Cincinnati people, stop fucking complaining or worrying that he's going to leave. I saw that A LOT in my mentions and just walking the streets of Cincinnati. People couldn't stop talking about 'what happens if he leaves?' You know what happens? You had a pretty good run and he took a better job. Cincinnati isn't a forever job. It's a stepping stone in a way for big time jobs. Mick is a UC guy through and through and left for UCLA. If Wes Miller leaves for UNC it's a similar case.

You're welcome, Cincinnati. First round on you Wes.