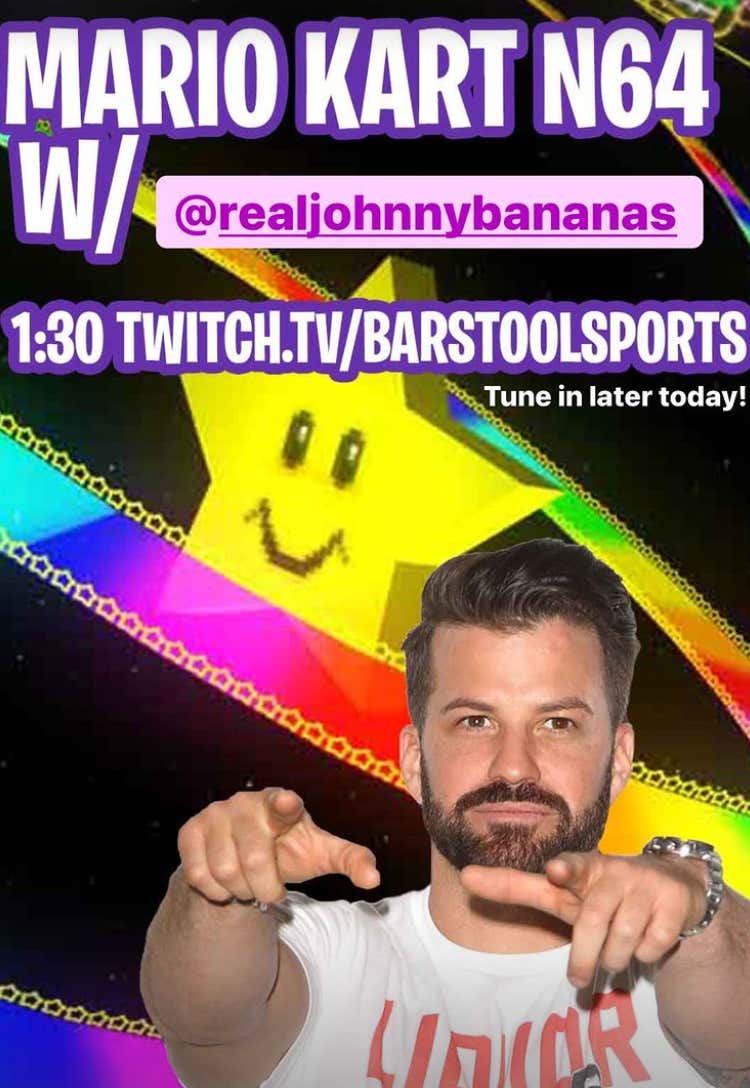 Maybe. Figuratively and virtually in Mario Kart 64, of course. I think. The great Johnny Bananas has come into town and the first thing he wants to do is run some N64. Don't hate it. The Challenge legend is the host of the new delightful show Celebrity Sleepover -

- and now he wants to come attempt to step on my literal glory in MK64. Interesting. Need I remind you and Mr. Bananas of our Mario Kart 64 roots. A few years back, we had The Race Of The Century. Before the Nascar partnerships, before the Spider Monkey got neutered, before even Barstool's FIRST ever Fantasy Football podcast - FF Factory, there was #ColeyTheMick Vs. #DriftSmittyDrift. A battle of might in the art of Mario Kart 64 where the defeated would:

Over 10K people tuned live into Facebook Live (remember when we were told that would be the next biggest thing? That was cute. RIP Drivetime.) to see what would happen, which made us go, "Holy shit, people actually watch other people play video games? That's a thing?" And thus, Barstool Gametime was born. There will be another announcement tonight concerning the future of Gametime, and it could be a big one. But before we move forward, we must look back. Here is what occurred at Barstool Sports HQ2 on October 31st, 2016:

Two grown men playing a 20 year old video game for a permanent tattoo or legally changing their birth given name. In the end, there are no winners.

The Race Of The Century. Coley vs. Smitty. I'll admit, when we made the stakes, I was blinded by Coley's shit talking ability and the fact that someone who had already died robbing Fenway in The Town couldn't come back to life and beat me in video games. We agreed that if I won then Coley would get a Mario Kart tattoo. Ho hum. Been there, lost that. Obviously I can't keep on going around proclaiming I'm the greatest MK64 player on Earth unless the stakes were raised, and upped they were. To the moon. If I lost I must legally changed my middle name, which is after my father, to that of Coley's choice. Something I didn't realize would have that much affect on my parents, as they were NOT pleased. Also, a wager was made if I for whatever reason got shutout, I would quit Barstool, owe Riggs $10,000, take the N64, and walk back to Philly. And, yes, you are correct in thinking I know not what I do.

Oh well. A bet's a bet. And for whatever reason, nobody believed in the kid. The opening odds were PREPOSTEROUS.

Good. I've been born and bred as an underdog in a city that feeds off of battling uphill. Granted, myself and my hometown may always be considered the non-favorites because we in fact never win, but that's not the point. Those odds were a complete kick to the dick of the little respect I hold onto in life. And in the beginning, that line was spot on…

That sweatpants HOF fuck won each of the first 5 races, including a devastating photo finish at Kalamari Desert. Not good for business, morale, or my Mother's belief she still has a son. Also, we were getting all sorts of heat from the peanut gallery from those who would never have the balls/stupidity to bet these stakes.

Only more fuel to the inner fire (I guess). We started to relax, break open some Oaks, and nickel and dime our way back to reality. By midway through the Star Cup (about 10 races in) I made it a game again. Then came Bowser's Castle. Depending on your heart and will it's a course that either turns boys into men or Nate. Needless to say, Coley took a one on the chin so hard I'm surprised the dip pouch(es) in his mouth didn't explode and take out the entire block.

And that was that. A total backbreaker that took all the air out of the room and wind out of the sails of Coley.

It was essentially game over at that point, but we played it out to the tune of a double digit victory in favor of Philly. Get ready for that parade down Broad St, baby. If the Little League Taney Dragons got one for finishing in third(!!!) then you're damn right I deserve at least a peasants welcome upon returning to The City Of Brotherly Love.

Credit to Coley. He was an average opponent with a lot of heart. But there was simply too much on the line for me to fail. Plus the fact that my middle name would've officially been changed to "Nate" makes the sun shine a little brighter this morning. The amount of shit my father talks on that squirt would've put him in the grave if his namesake was replaced with that creature's. Adam Patrick Smith lives on do disappoint his parents another day.