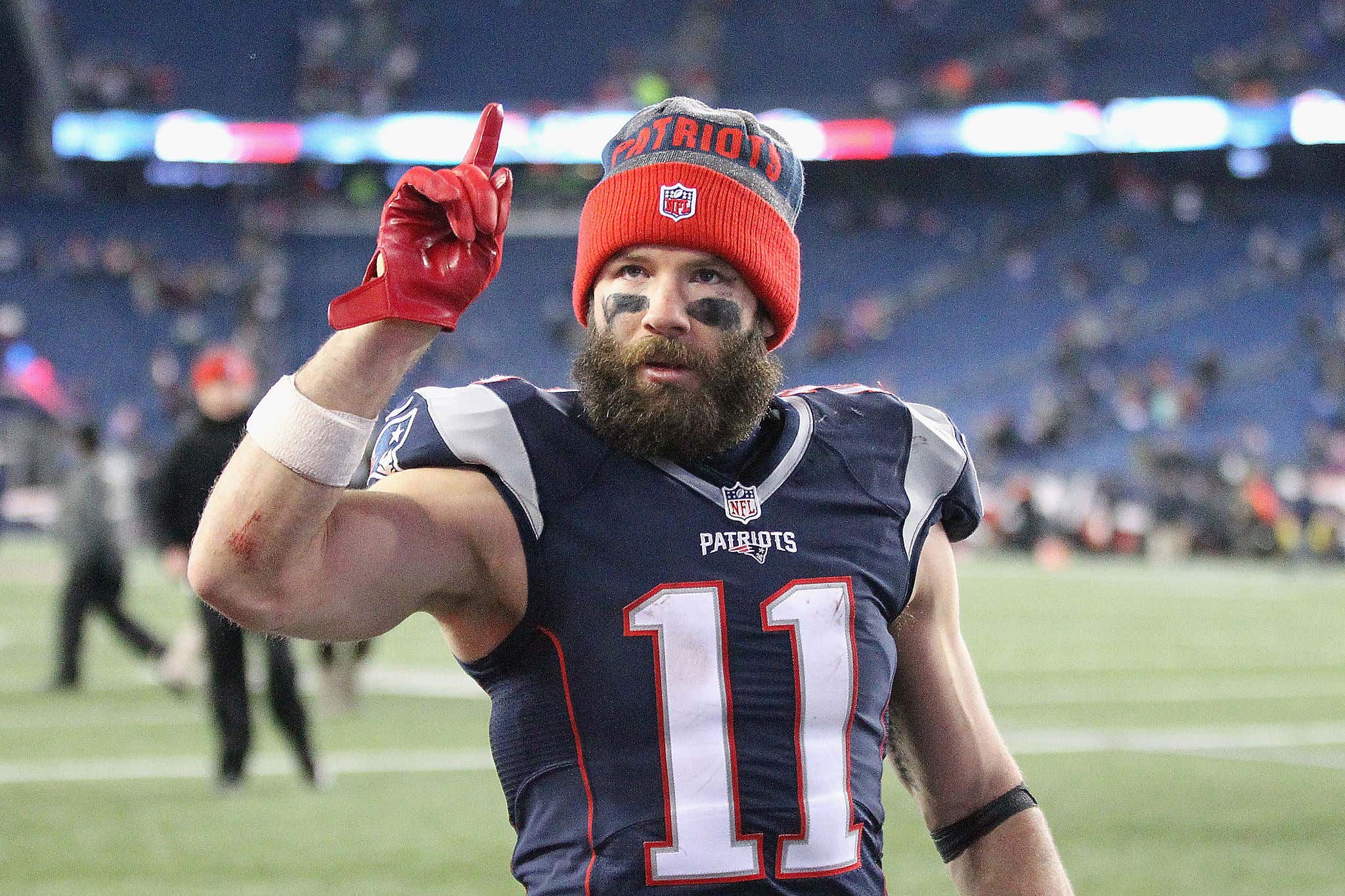 It's usually the case that when you've been following the career of a guy who's been making news, providing great moments, being a big personality and basically spending 12 months out of the year living a blog worthy existence for the better part of 11 years, it's hard handle when it's over. When his career suddenly comes to a stop the way Julian Edelman's  just did, it's not so much like a treadmill you've been running on slows down, as it is you stumble and do a face plant and get flung across the gym like an asshole. And the best you can hope for is you don't embarass yourself by saying something stupid on top of everything else.

With that in mind, here's an instant reaction to the end of the line for Edelman. Beginning with the question of whether all that blog-worthiness has led to Canton worthiness. One slightly connected NFL insider thinks so:

If we go just by the numbers, the way Cooperstown does it, this wouldn't even be a discussion. It would be a hard no. Among players all time, Edelman ranks just 75th in career receptions, and just 15th among active players. In receiving yards, he's 156th and 25th, respectively. As you might expect from a converted Kent State quarterback who was the 232nd pick in the draft, it took his career a while to get going. He hung on as a depth receiver/punt returner for a good four years before his 105-catch, 1,056-yard season in 2013. He never made a Pro Bowl. Missed the entire 2017 season as well as seven games in 2015 and 10 last year. So yes, by the back of his football card (Note: I don't know if they put career stats on the back of football cards anymore, it's just a metaphor at this point) he's not in the conversation

What I respect about the way Canton does it though, is that it is about so much more than accumlating big numbers over a long, if undistinguished career. The football HoF does not give out Irving J. Thalberg Lifetime Achievement Awards. It's about honoring the players who made an impact. Who affected the course of history. And in that respect, Edelman is deserving. You cannot tell the story of pro football in the last decade without including him in the discussion.

Just to keep it to numbers for a second, in spite of all the time he missed, he was one of the most prolific slot receivers in the league during a time when 3-receiver sets became the new pro-style offense and slot receiver evolved into basically an official starting position. More so than say, fullback.

And those numbers were much better in the postseason, where Hall of Fame careers are made. He'll retire No. 2 all time in career playoff receptions behind only Jerry Rice. They are the only two in history with more than 100 postseason catches, and there's a huge gap between Edelman's 118 and No. 3 Reggie Wayne's 93. Rob Gronkowski is No. 4 with 89, but it's hard to see him catching his boy in the time he's got remaining. In his last 10 career postseason games, he had 100+ receiving yards six times. In his three Super Bowl appearances since becoming the starter, he totalled 337 yards, an average of 112.3 per game. He won the MVP of Super Bowl LIII, with 10 receptions on 12 targets and 141 yards.

But really, his finest hour might have actually come in the 2016 championship season, when he averaged 129.3 yards in three postseason games.

But Edelman's impact was much more about the moments than the numbers. None better than this catch for the ages. If pro football were soccer, some poet would've given it a romantic name like the Catch from God or something. Instead, we just remember it as it was. Played out in agonizing detail frame by frame until it removed all doubt he'd kept the Patriots 25-point comeback hopes alive:

There's the double pass to Danny Amendola that help lead one of two 14-point comebacks against the Ravens in the 2014 AFC Divisional round:

There's him shaking off this earthquake-inducing hit in the Super Bowl win over the Seahawks:

… Only to catch the game winner on a pivot route on the goal line that Brady had missed earlier in the game:

Anyone who remembers Lima sitting like a doe-eyed fangirl off to the side after that victory over Seattle in Super Bowl XLIX waiting patiently for him to be done giving interviews realized in that moment that he's a Hall of Famer in anyone's book.

So long, Julian Edelman. Your  essential contributions to the second half of the greatest Dynasty in sports will never, ever be forgotten. See you in the Pats Hall of Fame in 2025, and in Canton shortly thereafter.