I have long maintained that Eli Manning is going to be a Hall of Famer. He has two Super Bowl rings, two Super Bowl MVPs, and eye popping stats (8th in passing yards, 8th in passing completions, 9th in passing touchdowns, and 3rd most consecutive starts). You can poke holes in his resume by trying to say his team carried him to those titles, Justin Tuck deserved the first Super Bowl MVP, and the stats, outside of the comically incredible durability streak, were a product of the changes in the rules that made defending super freak athletes impossible.

However the most important part of Eli's Hall of Fame resume is that he clearly has the votes considering he is a member of the first family of the National Football League. Yes I worded that like an old newspaper writer would because those are the type of guys that vote for the Hall of Fame. As many of those writing romantics have said, the history of the NFL cannot be written without Eli Manning, which adds to his case for Canton. I have heard the Pardon My Take fellas joke while not joke about how Archie Manning is the puppetmaster that has the entire NFL dancing at the end of his strings. Well if that's the case, how much do you think he is going to get his baby boy in the Hall of Fame? Exactly.

The only part of the puzzle that Archie can't control is the new media. The NFL writers that write articles referencing advanced stats that you don't quite understand and long threads about how running backs don't matter. Well those people all listen to Pardon My Take.

The PMT guys are super talented in a lot of areas. But their greatest talent may be making once unlikable people like Marlins Man and Joe Buck likable (More so Joe Buck than Marlins Man). Well Eli is already super lovable to anybody who knows actually knows him and after his appearance on PMT, I imagine everyone loves our beloved Elisha to the point that those that weren't going to vote for him to make the Hall will vote for him and those that were going to vote for him will now vote for him on the first ballot. I mean how can you not vote for this man every time he appears on the ballot after he gave this Manning Face for his Hall of Fame bust? 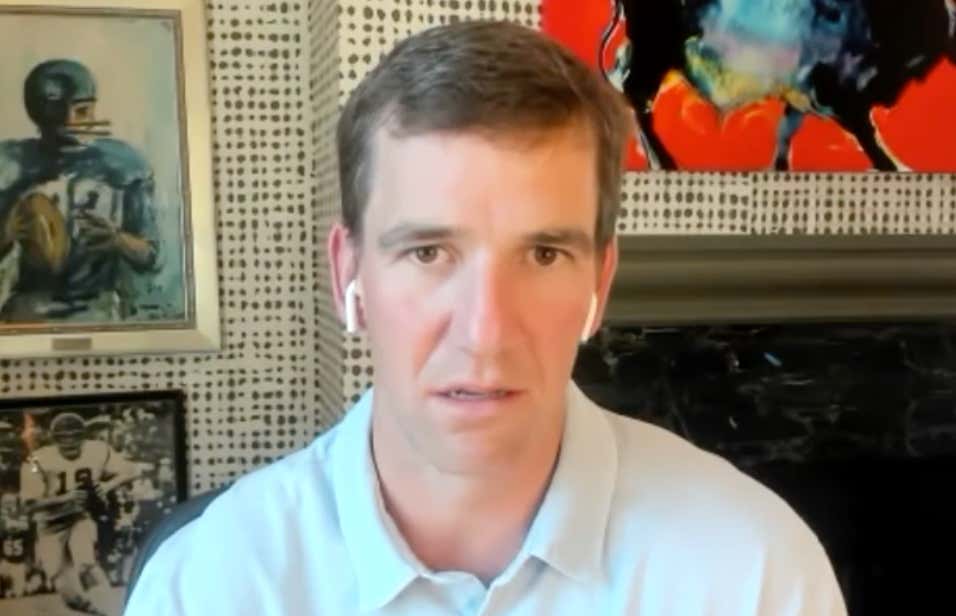 It's truly impossible not to love that man. Save me all your stupid win-loss record mumbo jumbo (where he is above .500 in his career in games that matter), interception stats, or MVP votes. Eli Manning was a future Hall of Famer before that interview dropped and became a first ballot Hall of Famer the millisecond it was released.

God I love that gif. And that man. And that family. #ThankYouEli